This savory tart starts with an easy grain free pastry crust and is packed with caramelized onions, mushrooms and red chard.  It’s the perfect healthy addition to your weekend brunch!  Gluten free, dairy free and paleo. 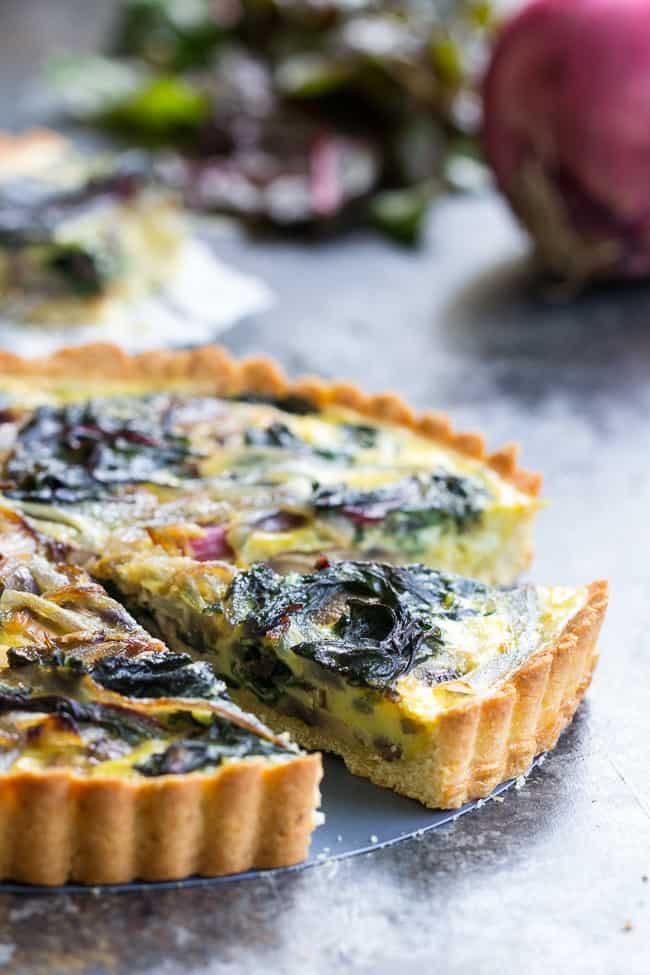 Yes, I’m still having LOADS of fun with my paleo pie/pastry crust recipe!  New recipes like pie crusts or pizza crusts are sort of like new toys in the land of paleo cooking.  So many avenues to explore!

Stop number 3 (after my coconut custard pie and broccoli quiche) is a savory tart packed with loads of veggies and tons of flavor.  Did you really think I could resist another brunch item with Mother’s Day coming up this weekend?!  Heck no!  So here were are, just wait, this gets REALLY good – I promise. 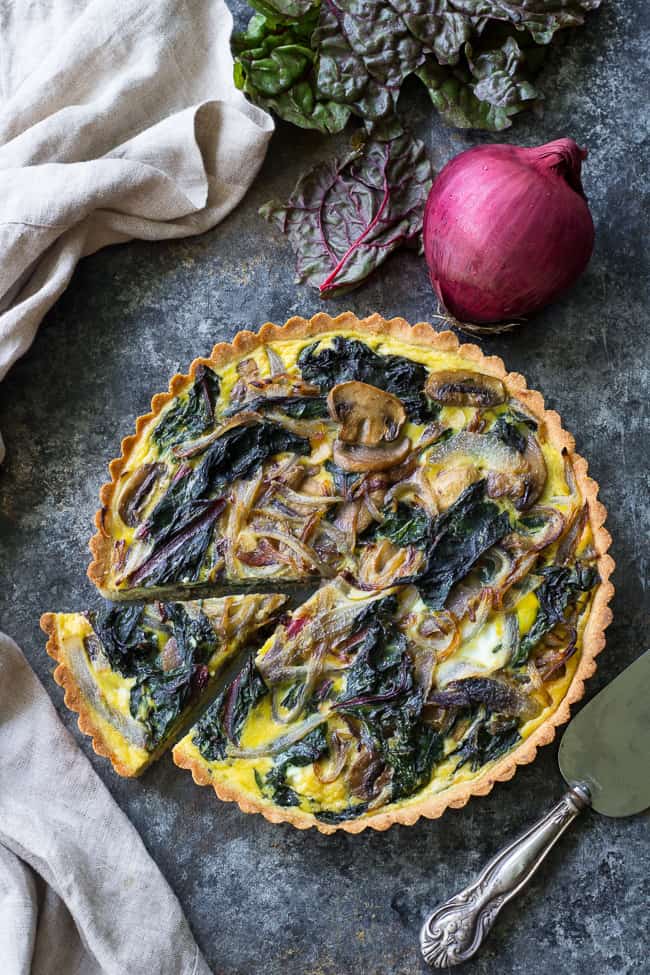 You all might know by now, if you’ve been reading somewhat regularly, that I get just a little bit fixated (read: obsessed) with a particular type of recipe prior to diving in and trying it.  Ever since working out my now-favorite pie crust recipe, I wanted to see how it would work in a tart pan, and I had my heart set on a savory tart.

To be completely honest with you (and risk showing you how unsophisticated I am..) I had no clue what differentiated a savory tart from a quiche, aside from the pan you made it in.  In fact, the tart pan I purchased on Amazon was labeled a “quiche pan with removable bottom” even though it sure as heck looks like a tart pan to me.

After doing a bit of research, it turns out that there may or may not be a clear difference between a savory tart and a quiche, depending on who you ask.  It seems tarts have a lower ratio of egg mixture to veggies/meat, which sort of affirmed that I indeed wanted to make a tart rather than another quiche.  Have I lost you?  Please don’t leave, we’re about to get to the good stuff – the food! 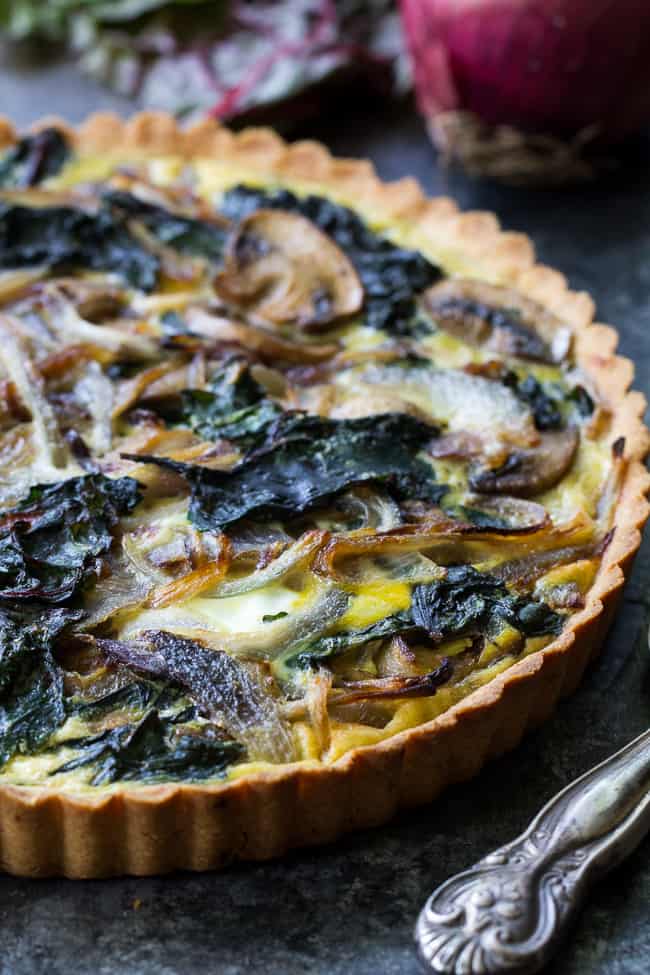 Yes, the food!  I wanted this tart to have a lot going on, veggie wise, without being simply a “kitchen sink” pile of veggies with a couple of eggs mixed in.  We have perfectly caramelized onions, red chard (I went with both red onions and chard for the color, but flavor wise you can use any color onions and chard that you want) plus sliced mushrooms to make this “meaty” without actually adding meat.

I have so many quiche/egg bake recipes involving bacon or sausage (or both!), so I wanted to steer away from meat for once and create a lot of flavor with just the veggies.  No worries if you’re a fan of bacon and sausage – I have a recipe coming this weekend that includes both, since apparently I can’t stay away for long. 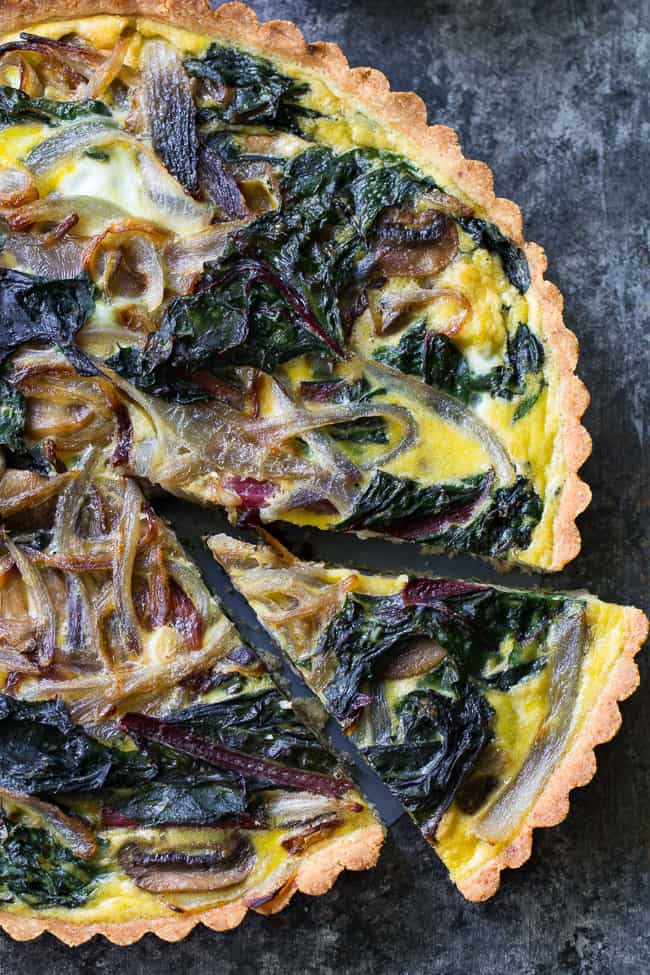 The crust recipe I used makes just a bit more dough than you need for a 9″ tart pan, and if you don’t happen to have a tart pan, a regular 9″ pie dish will work for this as well.  I recommend baking the crust until it’s just barely set before adding the filling ingredients, as you can see in the pictures, the crust turned out perfectly golden that way.

The filling is very straightforward and easy, however, as a warning – caramelizing the onions properly requires patience!  I have sometimes recommended allowing them to cook for 30 minutes, which seems like a long time, but the finished product is just so perfect when they cook for that long, that I do think it’s worth it.   That said, you don’t absolutely have to cook them for that long to get great flavor – I cooked mine on med/low for 20 minutes this time around with great results (and lots of stirring!) It takes some experimenting, but it’s the kind of experiment that you can’t mess up, so I don’t mind 🙂 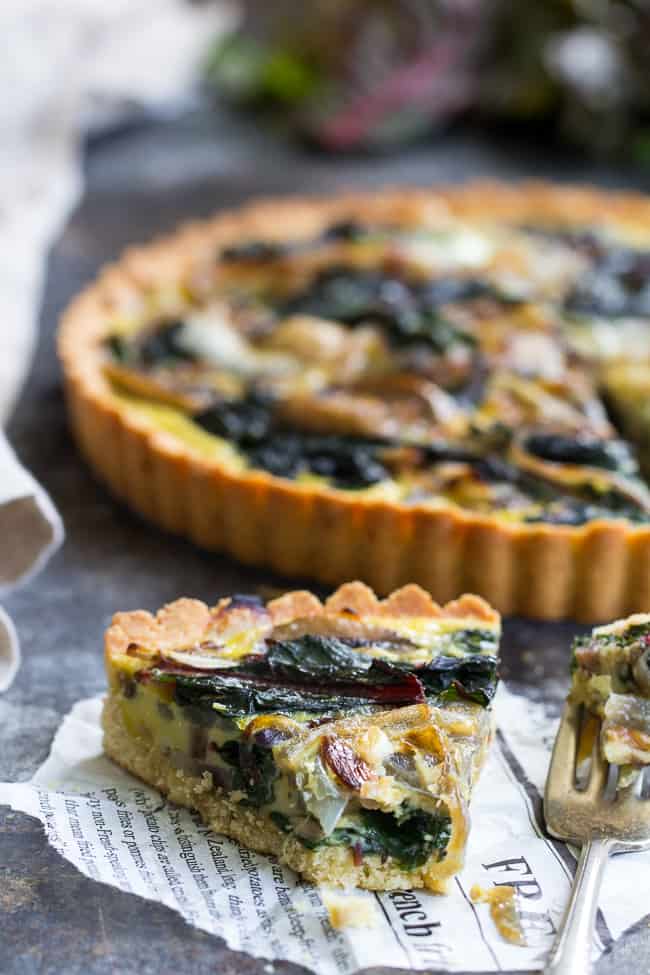 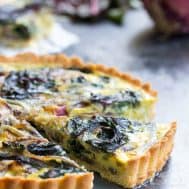 Print this Recipe
Did you make this recipe?
Leave a review
4.47 from 13 votes

*Prep time and cook time does not include the time needed to prepare the pastry crust.
**Optional, for added "cheesy" flavor

What I Used to Make My Savory Tart:

Want more savory Paleo brunch recipes?  Try one of these!