A savory, sweet,  satisfying and healthy breakfast or brunch recipe that will impress even the pickiest eaters!  This Spinach Bacon Quiche with Caramelized Onions has an easy, healthy, and delicious crust made of thinly sliced and roasted butternut squash.  It’s Paleo, gluten free, dairy free, and full of flavor and nutrition. 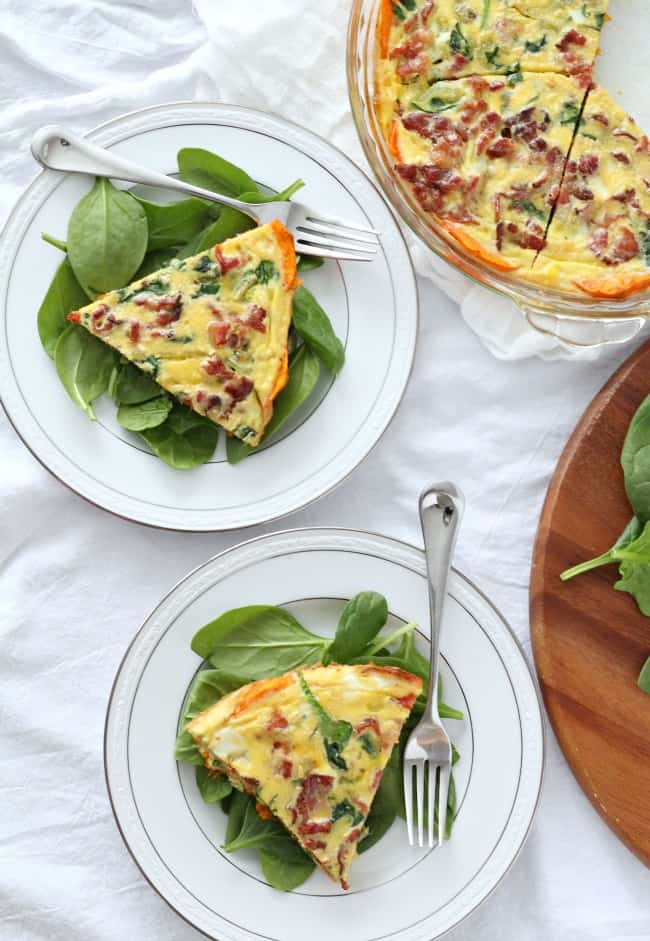 I have brownies in the oven right now so I’m just going to write this at the top of the post here so I don’t forget and burn them.  Okay good, writing things down always helps – especially when multitasking.

I’ve been doing a ton of multitasking lately, but, really, what’s new?  It HAS gotten worse since getting my laptop a few weeks ago, since I can now attempt to type up posts while doing just about anything and everything else you could imagine.  The interesting part that I’m sure some of you can relate to, is that I don’t actually get more done or get things done more efficiently.  It’s the opposite.  I seem to spend more time trying to do the same things that once took me far less time. 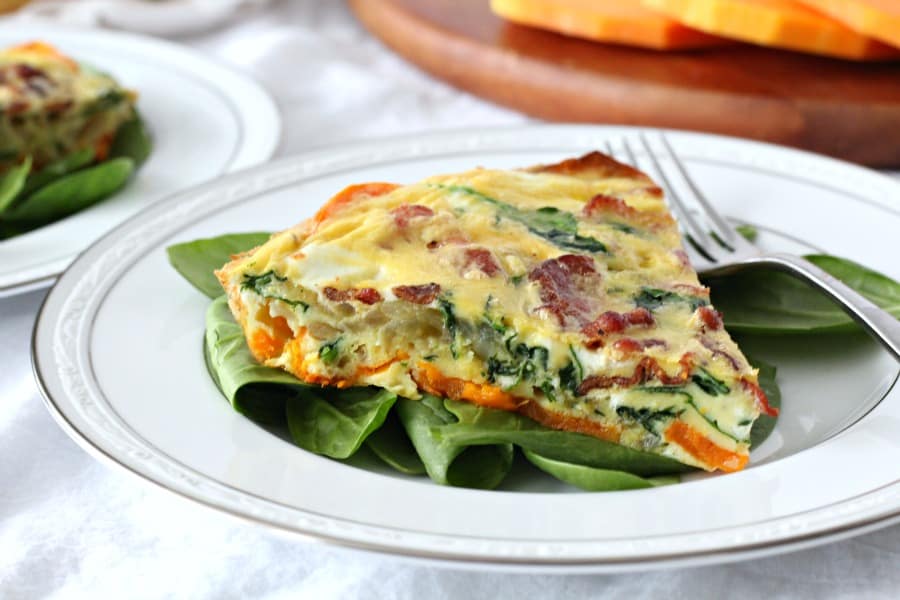 I get it, it’s because when I’m multitasking I’m actually adding things on that I wouldn’t be doing if I just stuck to one thing at a time.  I never learn.   It’s hard to find the discipline to stick to one thing and believe I will accomplish more that way.  Quality over quantity?  These are hard concepts in the world we live in now, when we have 10 tabs open on 3 different devices at all times.  I wonder if our brains will adapt eventually.   I think we will – it already seems like Drew (he’s almost 5) handles this sort of thing better than I do.  Or maybe that’s just me getting/being old 🙂 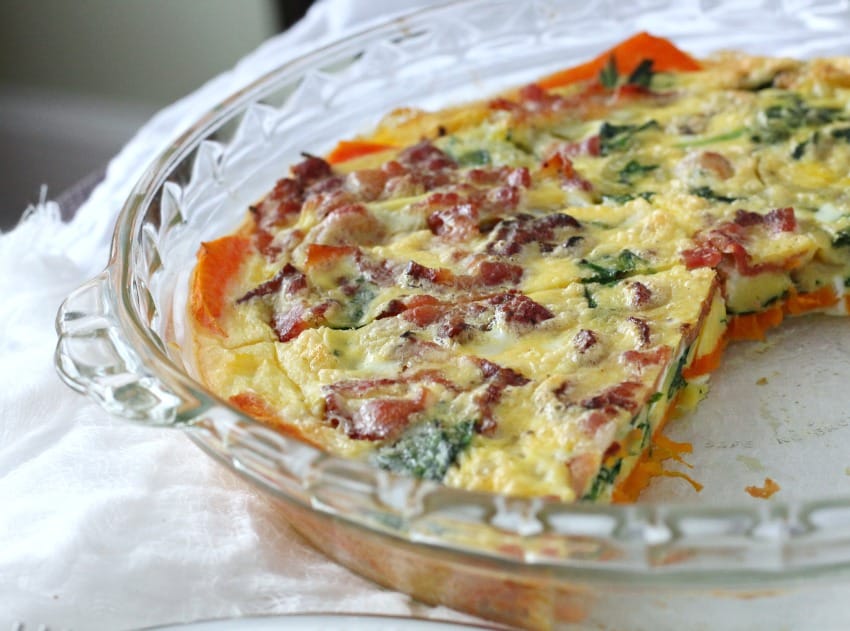 Anyway, multitasking isn’t necessarily always a bad thing, and without it my blog literally would not exist, so, there’s that.  Besides, what else are you supposed to do when you have brownies, a cake, or a quiche in the oven?  Clean up the kitchen?  That’s not my brand of multitasking – as you guys might know I like to save all my cleaning for one terribly unpleasant 3 day stretch every six months and then complain about it for another 3 days afterwards.  As I peak over my shoulder right now I’m starting to question my priorities, however.  Some things, like brownies, do require at least a little cleaning up after. 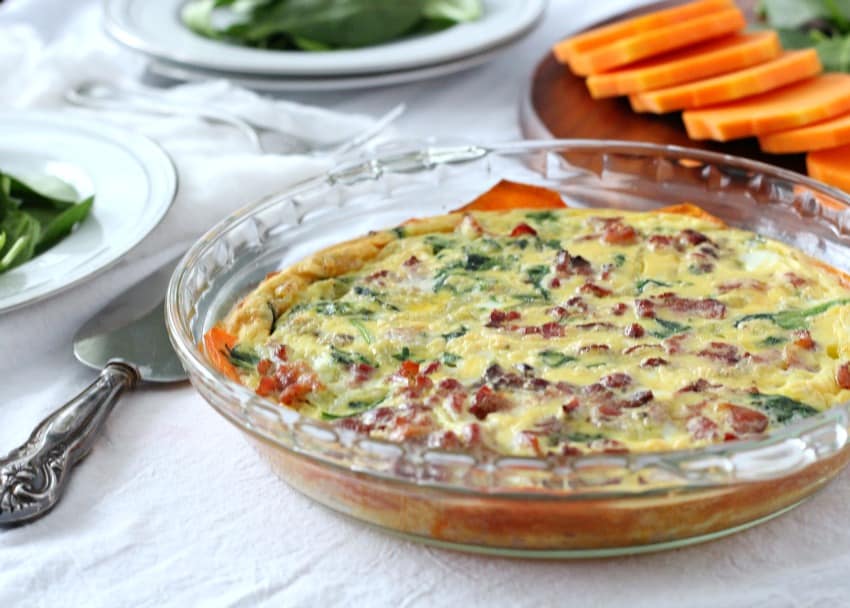 But why are we talking brownies again?  Oh right, oven.  Good thing I caught that!  As for today’s recipe (can’t you feel my scattered-ness?) it’s another one of my too-easy-to-be-true veggies crusts, that require no pureeing or mashing, but rather just slicing and roasting.  This time it’s butternut squash, and it is totally worth mentioning that both Adam and Diana – who are not butternut squash fans – L-O-V-E-D this.  Could be the bacon.  And the caramelized onions.  Who turns that down?  And for the green-lovers in all of us there’s plenty of spinach.  It’s delicious!  Try it out! 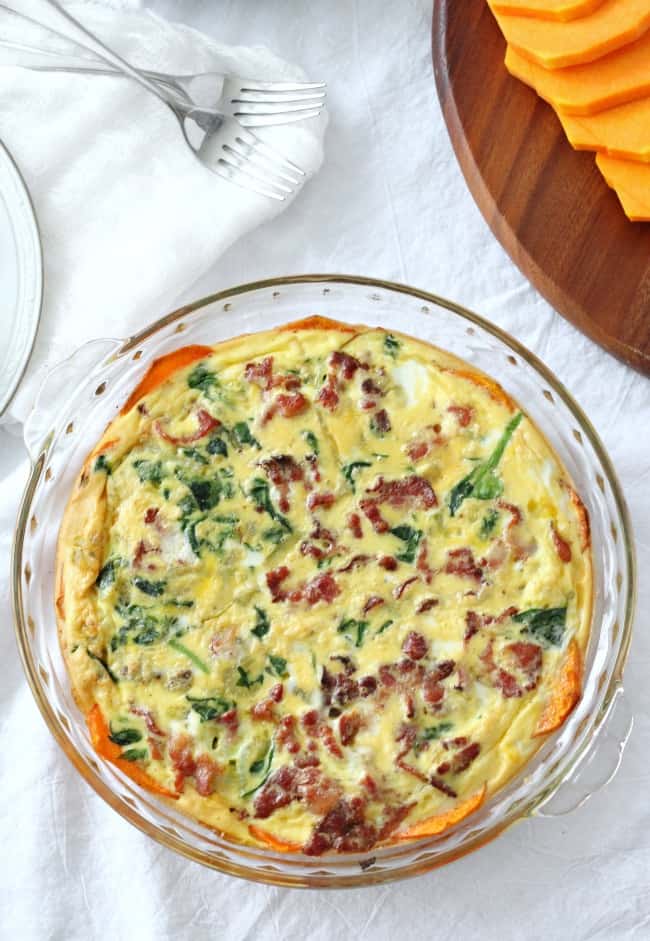 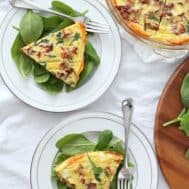 What’s your favorite kind of quiche?