This paleo quiche has an easy butternut squash crust and is packed with sausage, veggies and tons of flavor.  It’s Whole30 compliant and perfect for brunch or any meal.  Great as a make-ahead breakfast, too! 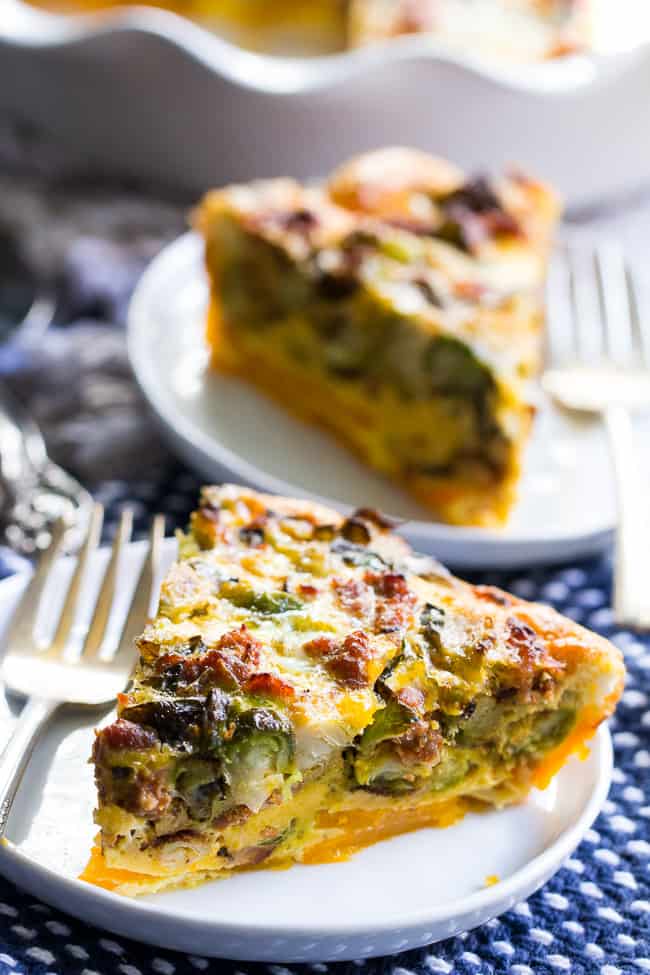 Truth – when I started paleo with my first Whole30, I practically LIVED on frittatas and egg casseroles.

Why?  Well, before I knew how to make a “hash” (HA! Such a staple now!) the only thing I could think to make for breakfast that was filling and tasted good was a frittata – usually a super simple one with ground meat and perhaps some broccoli or spinach to get the greens in. 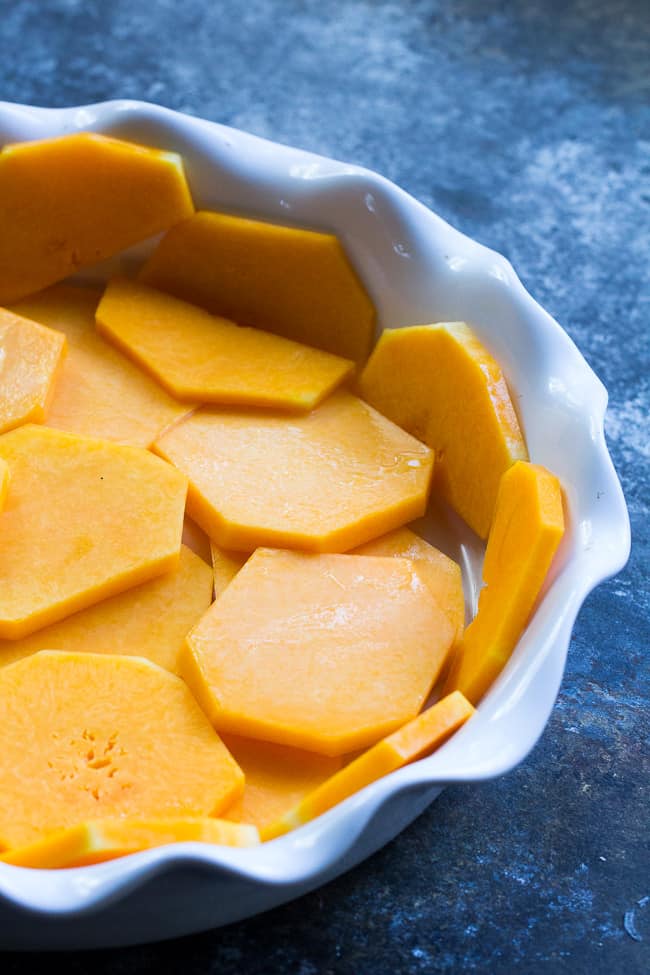 Since it’s not like I was about to quit paleo, I started exploring, and, while what I found wasn’t groundbreaking exactly, it changed the way I viewed paleo and opened up a big world of flavor and CARBS for me!

Sweet potatoes (in all their delicious varieties), winter squash, plantains.  I learned how to sautee/roast/bake them properly to bring out all that hidden flavor and started getting more creative with my breakfasts.

Sweet potato or butternut crusted quiches?  Now we’re starting to get somewhere that I can actually live happily. 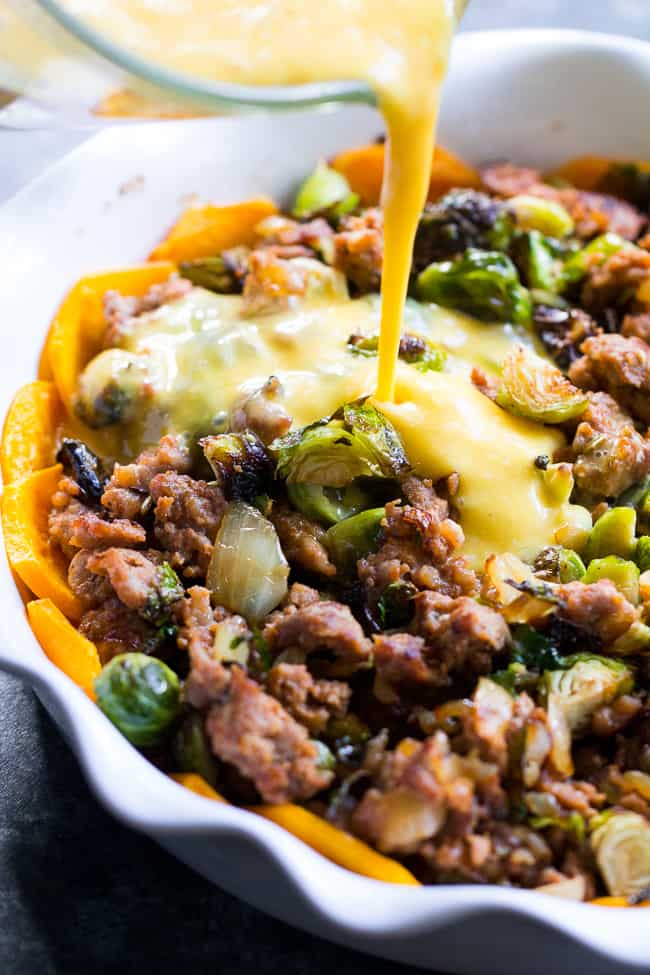 Fast forward to when I started really making this blog all about the recipes, and it was clear that breakfast was a huge favorite for me.

My paleo breakfast casserole is probably the number 1 reader favorite on the site, but I have several other similar recipes that use the same basic idea and method. 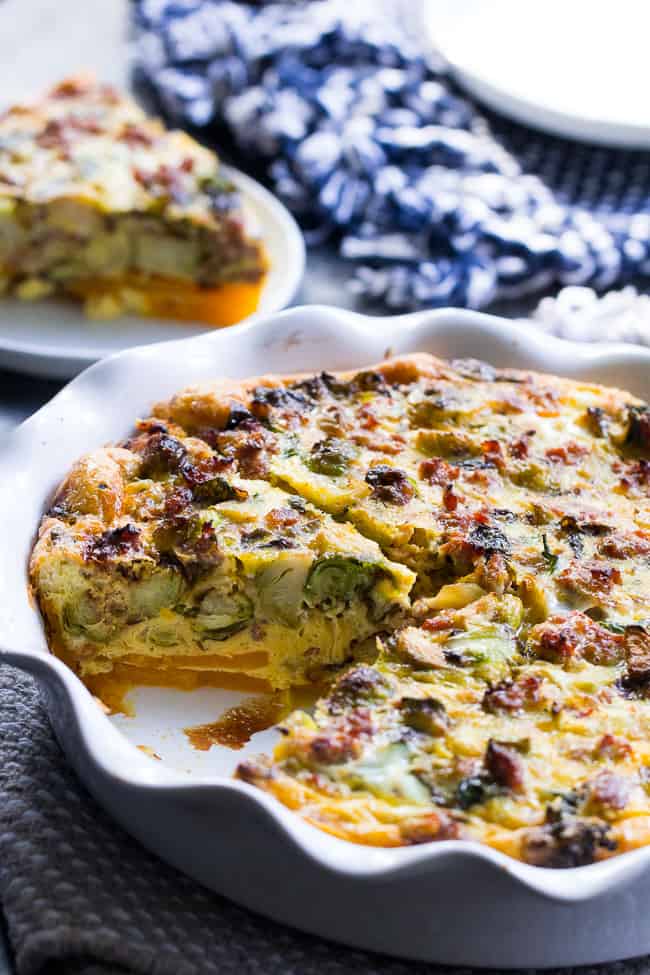 Packed with savory sausage, veggies, and a creamy flavorful egg mixture, it will hopefully change your view of breakfast if you’re stuck in a rut!

Now, while this recipe is time consuming (I will not lie!) it’s not at all difficult.  Because you’ll be roasting the butternut squash (in the pie dish) and the Brussels sprouts (on a baking sheet) the cook time is longer, but oh so worth it for that roasted veggie flavor in the final product. 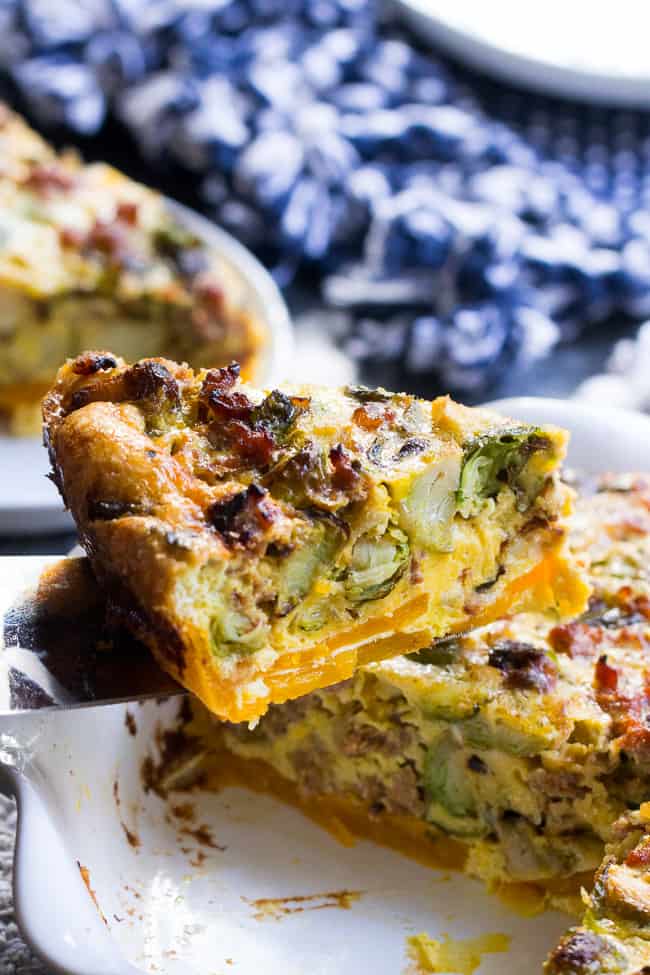 Don’t be afraid of the butternut squash crust, either – anyone can do this!  You simply thinly slice the long part of your butternut squash, arrange in the dish with coconut oil and sea salt and roast!  No need for perfection here, either, this is one of the most forgiving recipes on my whole site.

Once it’s time to bake the whole quiche, the egg mixture and the squash form a crust together that adds great flavor, some healthy carbs, and makes the whole thing just a bit more filling, in a good way!

A note on the nutritional yeast – it’s Whole30 compliant, and adds “cheesy” flavor to the quiche.  However, if you don’t want to use it, it’s not a deal breaker – so no worries if you can’t find it/don’t like it/etc.

Are you ready to get started?!  Breakfast anytime is the best kind of meal so let’s cook!

This paleo quiche has an easy butternut squash crust and is packed with sausage, veggies and tons of flavor. Whole30 compliant and perfect for brunch or any meal.  Great as a make-ahead breakfast, too!
Author: Michele Rosen
Prep Time: 20 minutes
Cook Time: 50 minutes
Total Time: 1 hour 10 minutes
Servings: 8 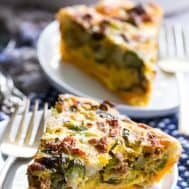 Print this Recipe
Did you make this recipe?
Leave a review
4.7 from 10 votes

What I Used To Make My Paleo Quiche with Butternut Squash Crust:

Want More Whole30 Egg Casseroles and Quiches?  Try one of these!

What do you crave for breakfast most often?