This easy to make, creamy coconut custard pie sweetened with pure maple syrup and topped with coconut whipped cream for the perfect coconut dessert!  This pie is baked up in an easy paleo pie crust and is completely dairy free, paleo and refined sugar free. 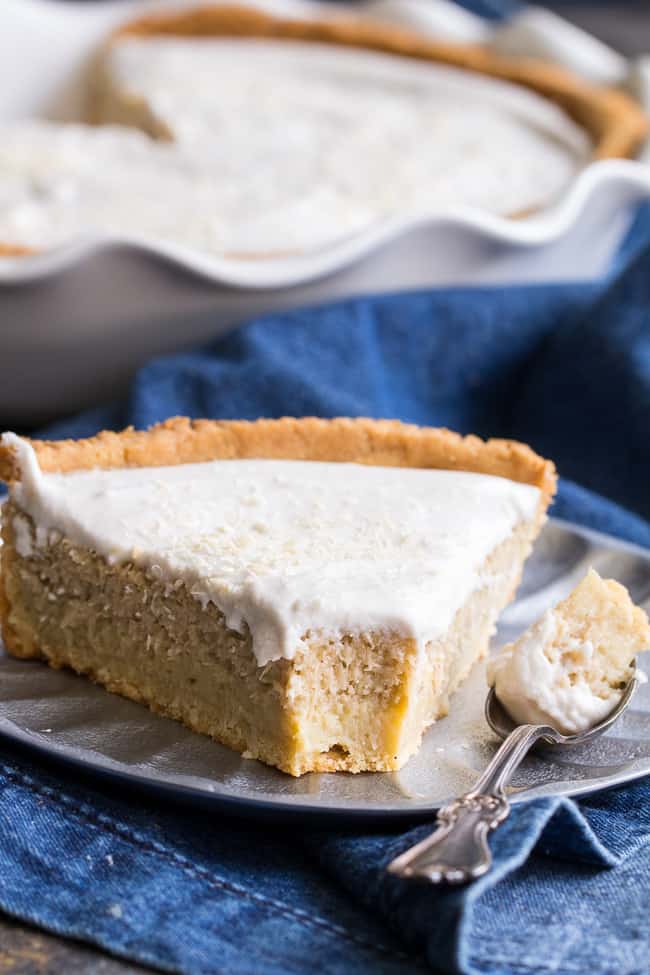 We’re going to have a baking sort of weekend, so might as well preheat the oven while we chat.  Ready?  Okay, let me tell you about what’s up first – one hint (besides all the hints from the huge photos, and the title, and the obvious) – it’s another filling for my paleo pie crust from last weekend!

Not just any pie of course – it’s one of my all-time favorites from childhood, and one that happens to be pretty darned easy to make, and even easier to make it Paleo.  In fact, making a non-paleo version seems a little silly since the whole basis for this pie is COCONUT which as we know, is possibly just a bit overdone in the paleo world.

Um, did I just say that out loud?  Blasphemy, my paleo child!  We just LUURRVE our coconut around here, no such thing as TOO MUCH. 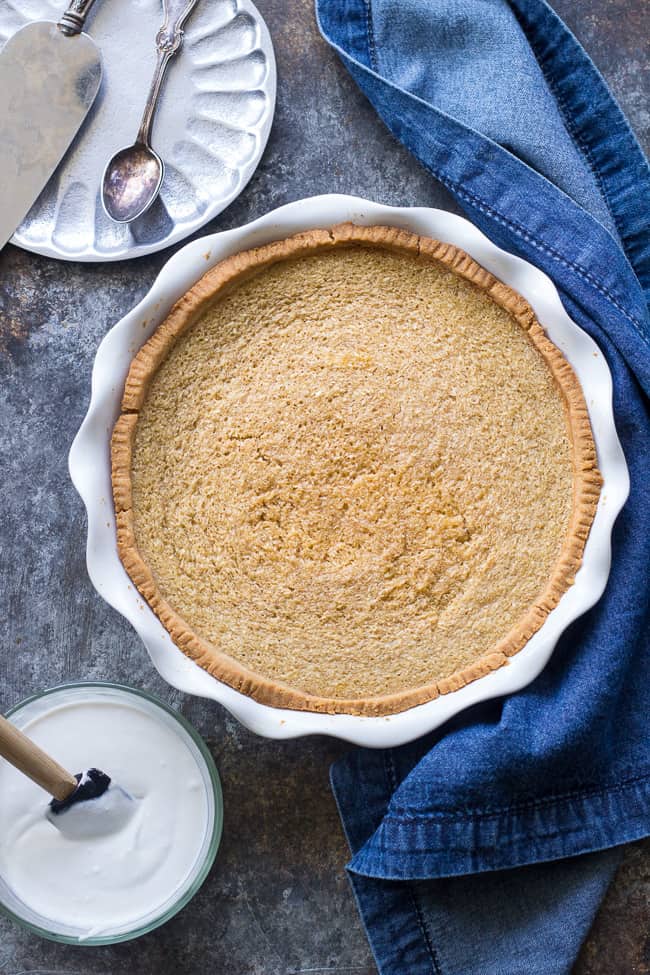 But seriously, when we’re talking coconut custard pie, the more coconut really IS better, in my opinion.  So we go all out – toasted coconut, coconut milk, coconut whipped cream for the topping, and then more toasted coconut.  No coconut sugar though, we’ll be sweetening this delightfully coconutty pie with pure maple syrup, then add vanilla and a touch of cinnamon for extra flavor.  Oh right, and the eggs.  Because custard is made with eggs!

I’m not sure I should be embarrassed by this or not, but I recently (as in 2 days ago) learned the difference between a cream pie and a custard pie.  I’m guessing maybe 50% of you reading this right now already know this gem of gravely important, life changing pie trivia, but that also means half of you don’t, so here goes… 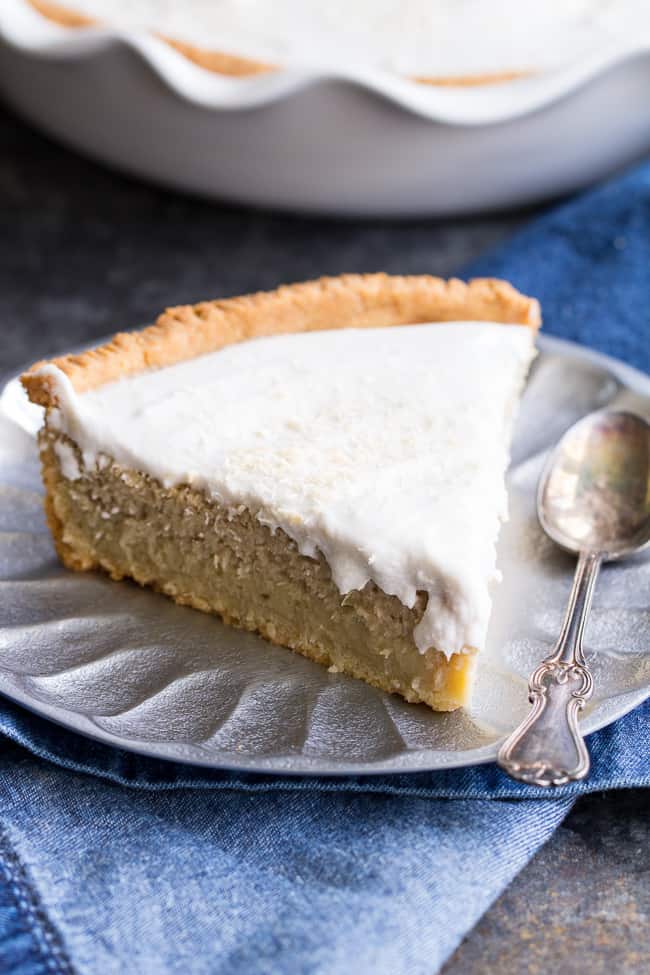 A CREAM pie is not baked, but rather the filling is combined and thickened on the stovetop, poured into the baked crust, and then chilled until set.  I would like to try this, perhaps a banana cream version, very very soon.  Anyway, a CUSTARD pie (what we have here) combines the filling in a bowl, uncooked, and is then poured into an unbaked or partially baked crust, and baked until set.   Learning new things makes everything worth it, am I right?! 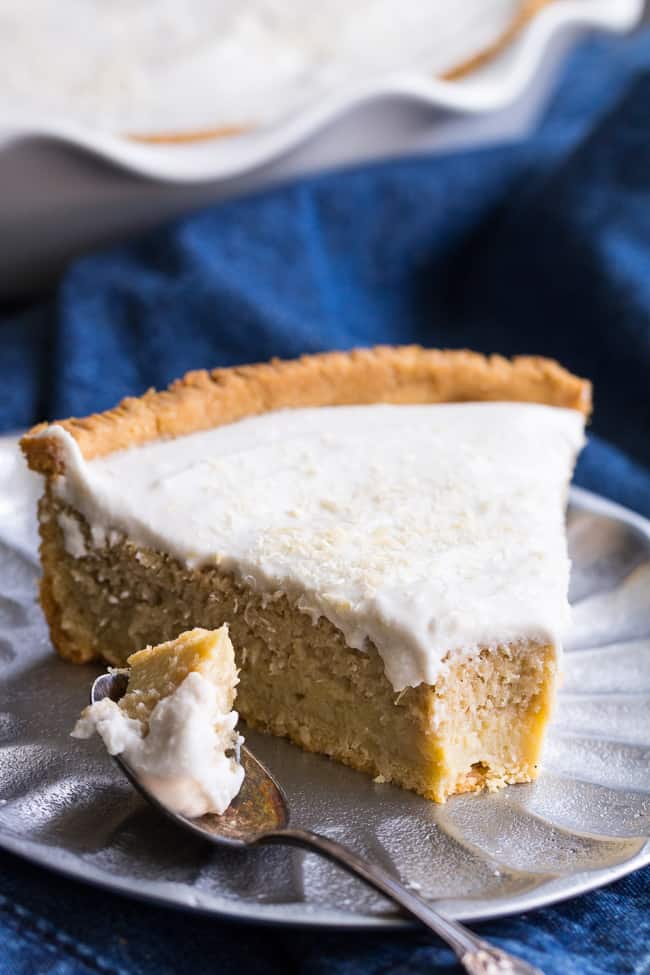 Hmm, this is the point in the post where I tell you my tricks/secrets for having complete success with the recipe, because NO ONE has time for recipe heartbreak, that is for sure.   While it’s pretty straightforward, I will mention 3 things.

First, the crust.  Since the pie bakes for 40-45 minutes, you want to pre-bake the crust just so it’s “barely set” (5-7 mins) so as not to have it too brown and crumbly by the time it’s ready.  That said, you will still need to use foil to either tent the entire pie, or cover the edges.  Honestly, I am not successful with just covering the crust, so I opt for the foil tent which works just fine!

Second, to avoid the pie cracking on top as it cools, make sure to follow the instructions and whisk in just one egg at a time when preparing the filling.  Having the eggs at room temperature helps too.  Still, if your pie cracks on top while cooling, no worries at all, because we’re topping it with coconut whipped cream anyway, which brings me to my final tip…

Third, when making the whipped cream, you will have to beat it pretty well to get it really creamy – I highly recommend using an electric mixer or stand mixer even (if you have one) and adding the sweetener only after it’s smooth. 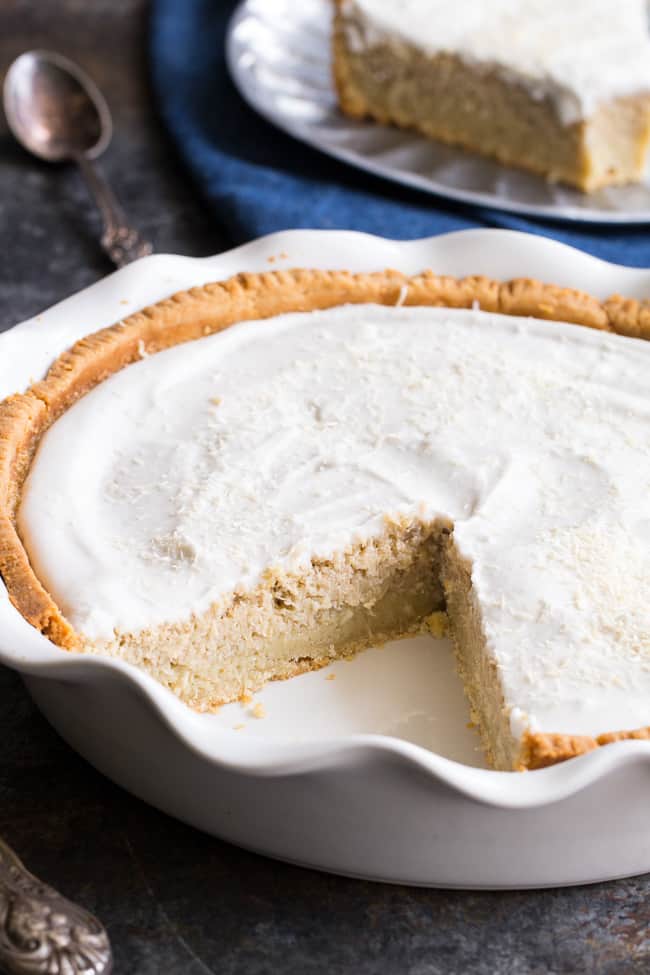 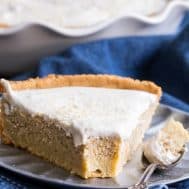 Print this Recipe
Did you make this recipe?
Leave a review
4.42 from 17 votes

For the coconut whipped cream topping:

*By discarding half the water of the separated coconut milk, you wind up with a thick, creamy coconut milk that's the perfect consistency for this pie and many other recipes. To blend, an immersion blender works best, though you can use a hand mixer or whisk as well.
**You can buy coconut cream only or use the "thick part" of a can of full fat coconut milk that has been chilled in the refrigerator for several hours
***Toasting the coconut prior to adding is optional

What I Used to Make My Coconut Custard Pie: 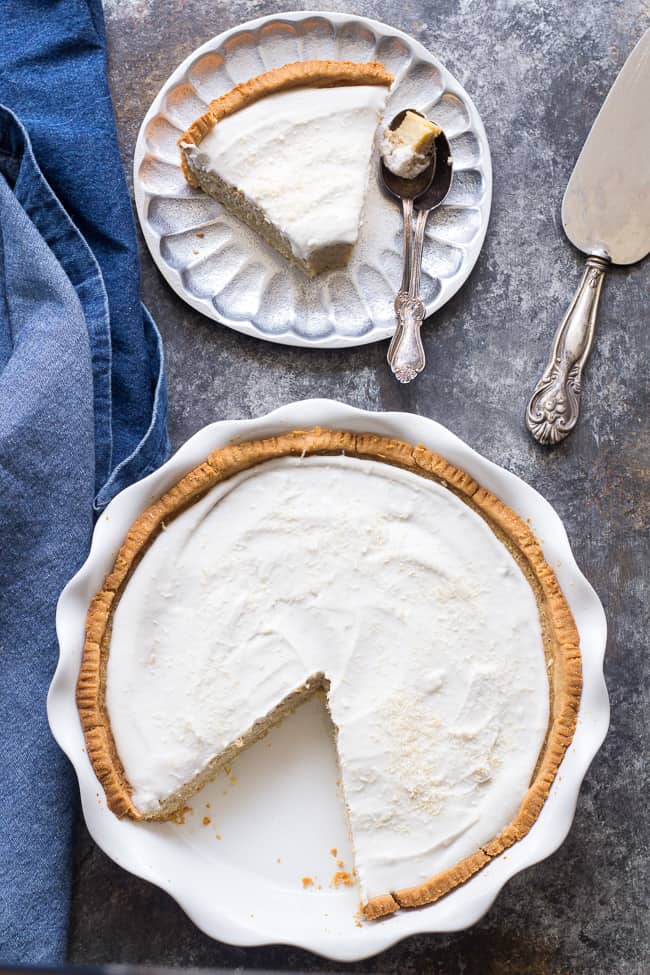 Want More Paleo Dessert Recipes?  Try one of these!

Have you made both cream pies and custard pies?  Which do you prefer making?