Take advantage of peach season with this paleo and vegan peach cobbler!  It’s sweetened with unrefined coconut sugar and spiced with a touch of sweet cinnamon, with a warm and crisp grain-free pastry topping that’s downright addicting.  A great gluten free, dairy free dessert for summer! 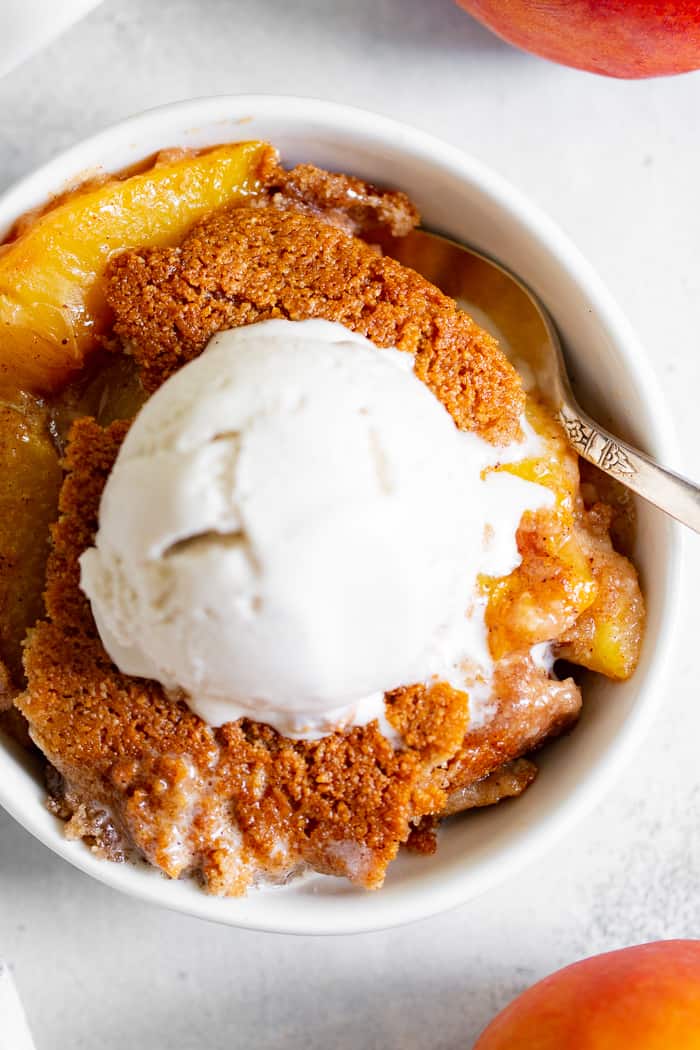 With all the summer fruits and veggies, I’ve had TOO much recipe inspiration lately and can’t keep up with the ideas.   I HATE having to choose between recipe ideas and often obsess about making the right choice.  As a result, I decide to drive myself nuts and just make all the things, which sometimes backfires when I burn myself out in the kitchen.

Anyway, this is what I’ve been dealing with this week – too many recipes, too little time, space and energy!  But, one thing I have absolutely no regrets about is this paleo and vegan peach cobbler.  Of course, after making this one I wanted to make one with just about every other summer fruit out there right now.  It’s hard to hold back after a dessert as yummy as this one! 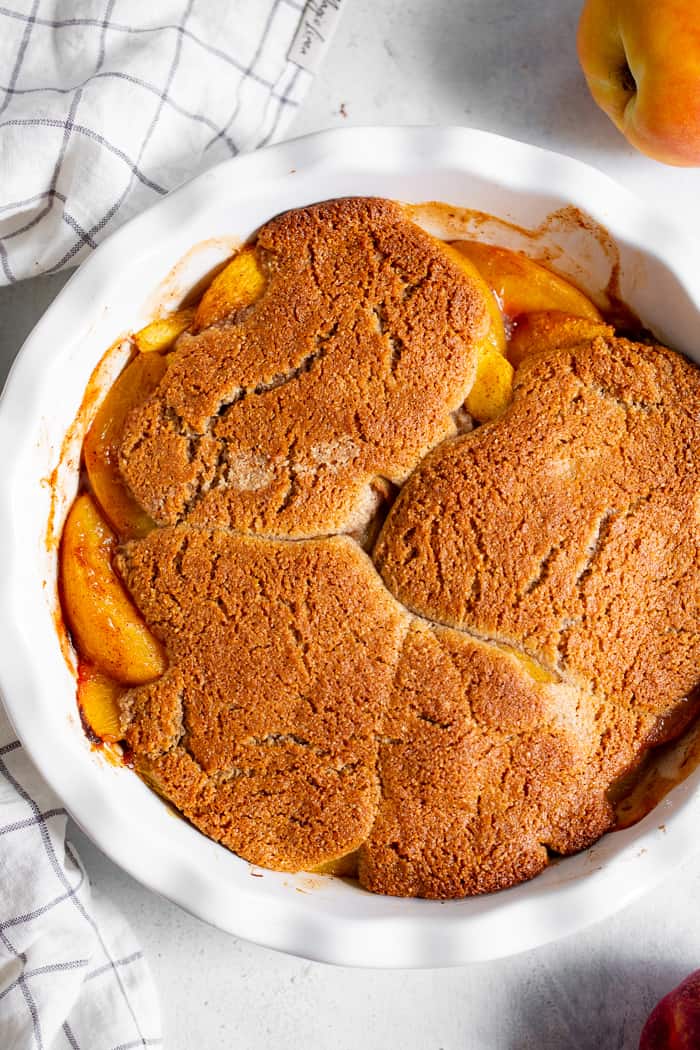 At first, I considered making this a “crisp” instead of a cobbler, similar to my maple pecan apple crisp.  But, I’d actually never made an official cobbler recipe before and wanted to give it a go.  Of course, since this is a paleo cobbler the topping is not exactly like the traditional self rising pastry topping you might associate with a cobbler.

However, it’s incredibly delicious and has a great texture, similar to a cookie in my opinion.  Are you going to turn down sweet gooey peaches with a cookie baked right on top of it?  I think not.  Nope, you will congratulate yourself on your awesomeness and dig in with double-spoon abandon. 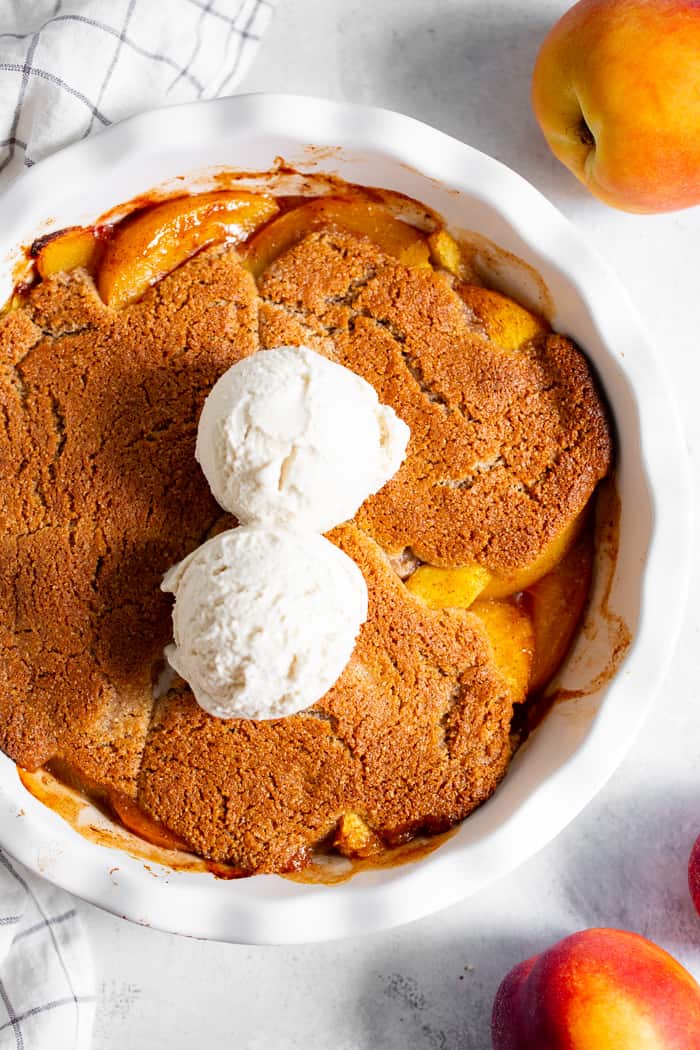 One thing about this recipe that I’ll note is that I used aluminum free baking powder in it, which is not technically paleo since it’s made with cornstarch.

Now, if you’re opposed to using baking powder due to it containing corn, have no fear – you can make your own paleo version!

Simply mix 1 tsp baking soda with 2 tsp cream of tartar – you can double or triple this if you plan to use more than a little bit.  It works just as well as baking powder for most purposes, and comes in handy for paleo baking recipes that need more than just baking soda. 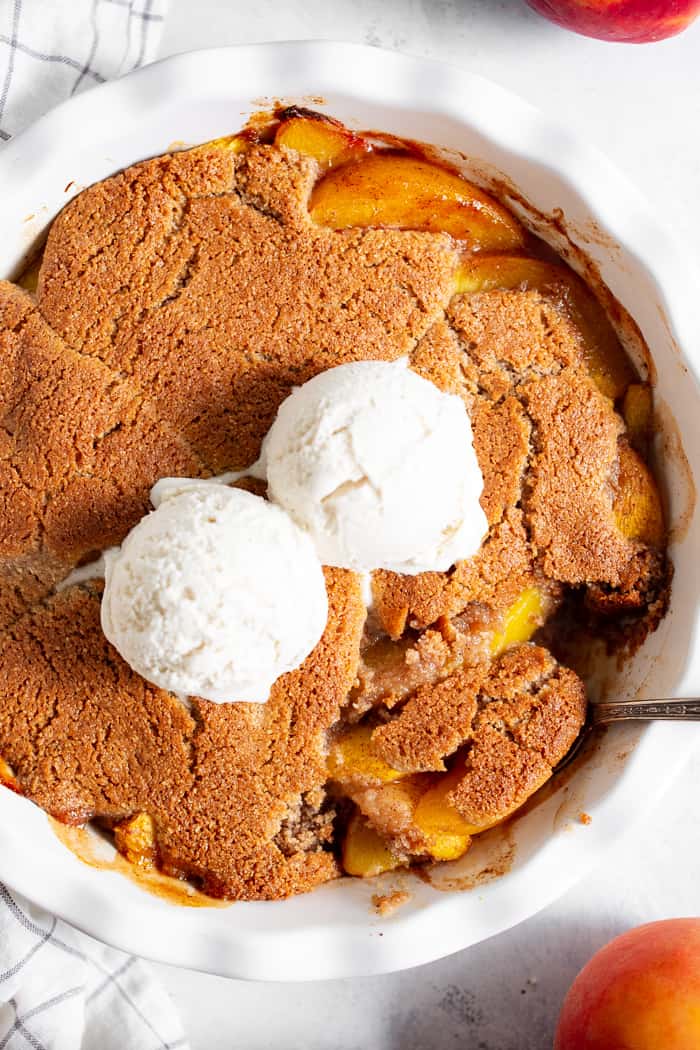 I’ve made this recipes in various baking dishes – two small pie dishes, one 9″ round, and a 9″ square dish and it will work with anything.  You can also easily double this recipe and make it in a 9 x 13″ casserole dish without a problem. 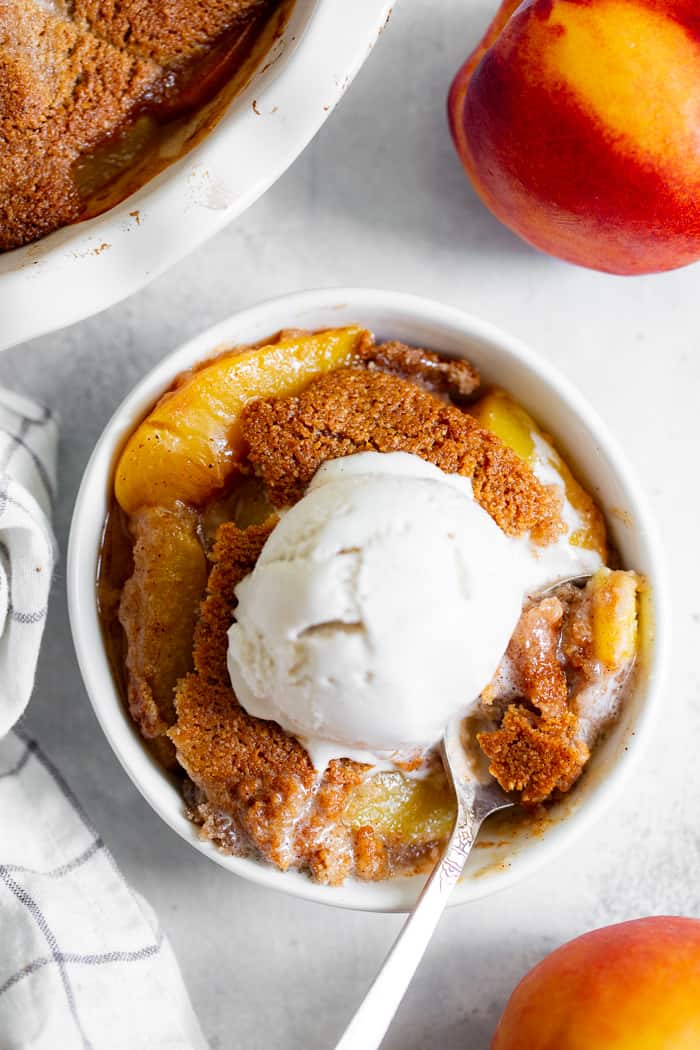 The ice cream, however, is non-negotiable in my opinion!  Yes, yes.  A peach cobbler is actually delicious as-is, but the ice cream gives it that dreamy, comforting yet exciting FUN factor that is 100% worth it!  You can make your own homemade coconut milk ice cream, or buy one at the store – makes things easy!

And now I’m a little bit sad that my peach cobbler is long gone (I think Adam and I finished everything within 2 days – I actually hid it from the kids, yes that was a mean-mom move!) However, I couldn’t be happier to pass the cobbler torch onto your guys, and then go make myself a strawberry one, perhaps (this time I’ll share with the kids!)  Okay, get the peaches going and let’s make this cobbler! 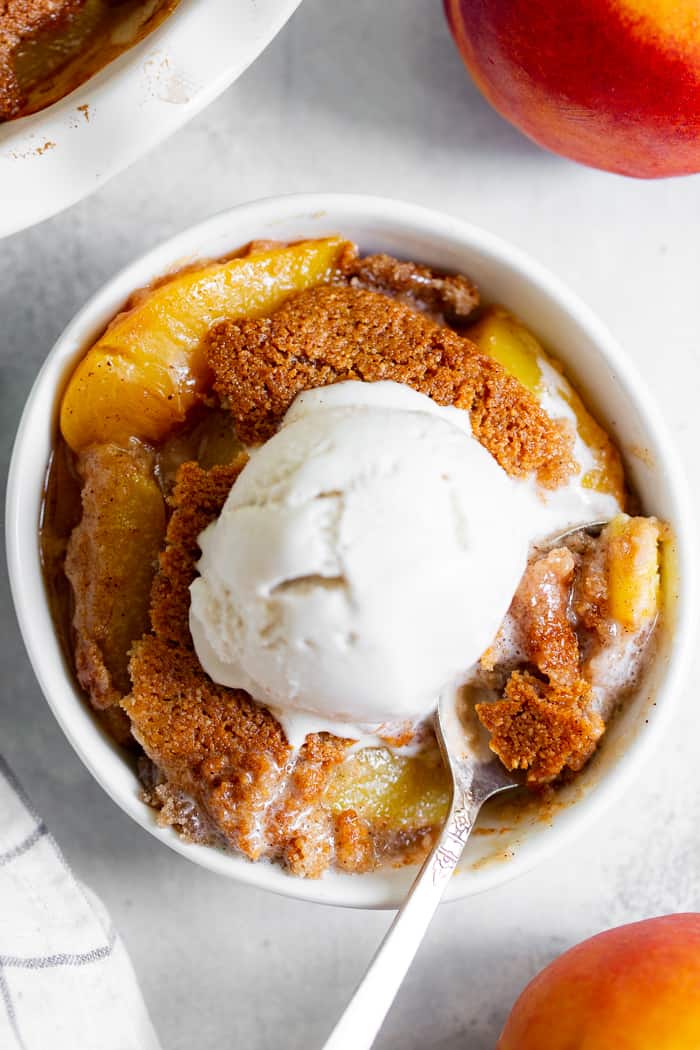 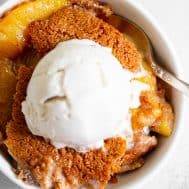 Print this Recipe
Did you make this recipe?
Leave a review
4.64 from 33 votes

For the Peach Filling:

*To make paleo-friendly (corn free) baking powder, mix 1 tsp baking soda with 2 tsp cream of tartar. For this recipe, you will need just 1 tsp total of this mixture.

Want more paleo & vegan dessert recipes?  Try one of these!

Favorite summer fruit to bake with?