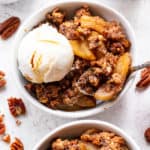 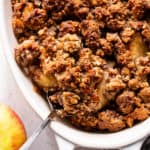 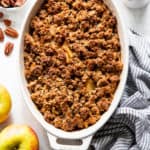 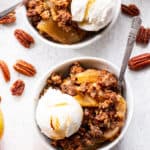 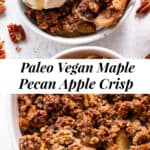 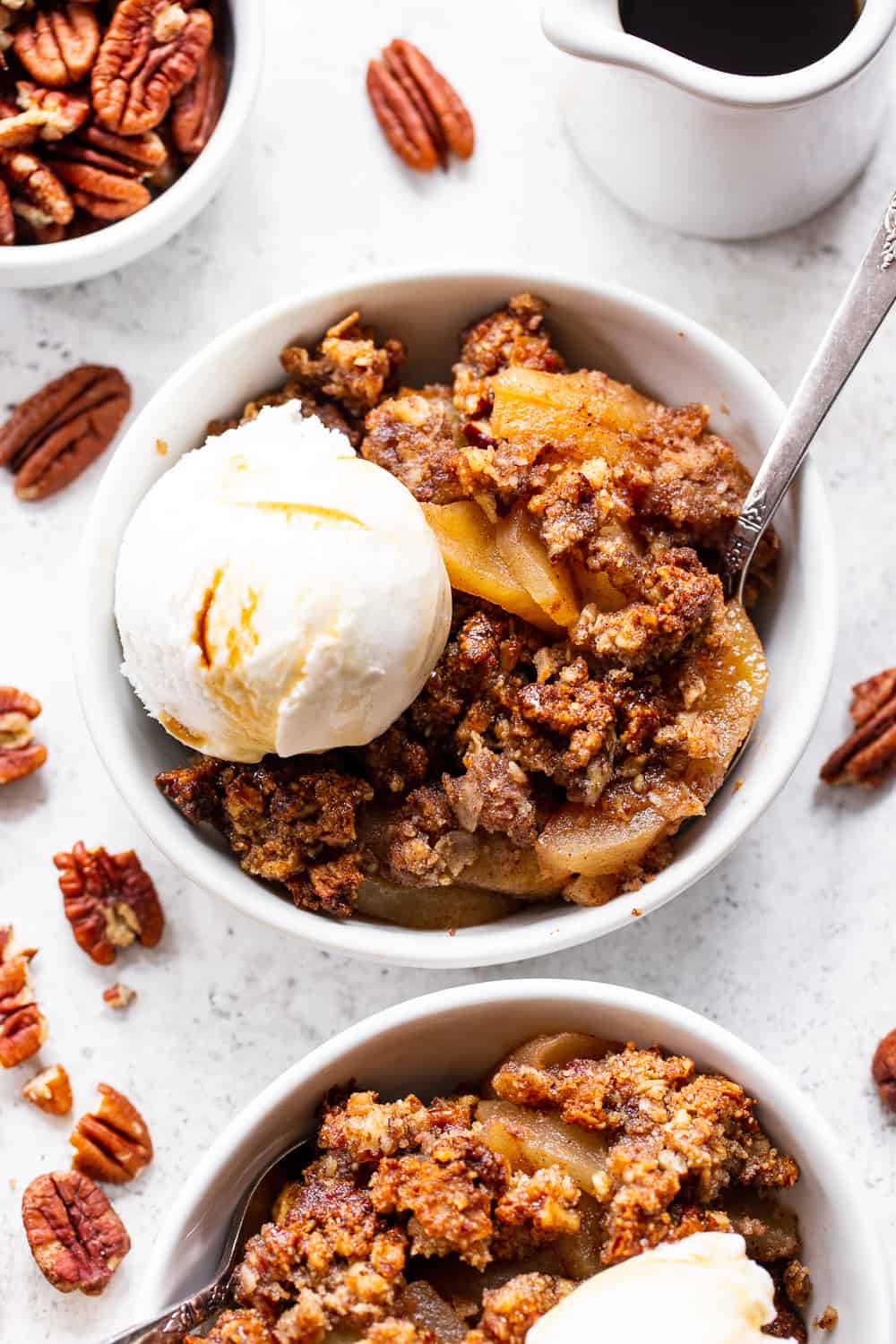 I used to make non-paleo versions of apple crisp a few times every fall.

In fact, the first thing Adam ever witnessed me cook/bake was an apple crisp!  We were dating for less than a month, and he was clearly impressed and still talks about the apple crisp day!

So, apple crisp was my original claim to fame with my husband.

I knew I had to get the paleo version of this right and luckily I came up with a crisp topping that’s SO delicious and made with good for you ingredients.

This recipe is such a hit with my family that whenever I make it it’s gone within a couple of hours. 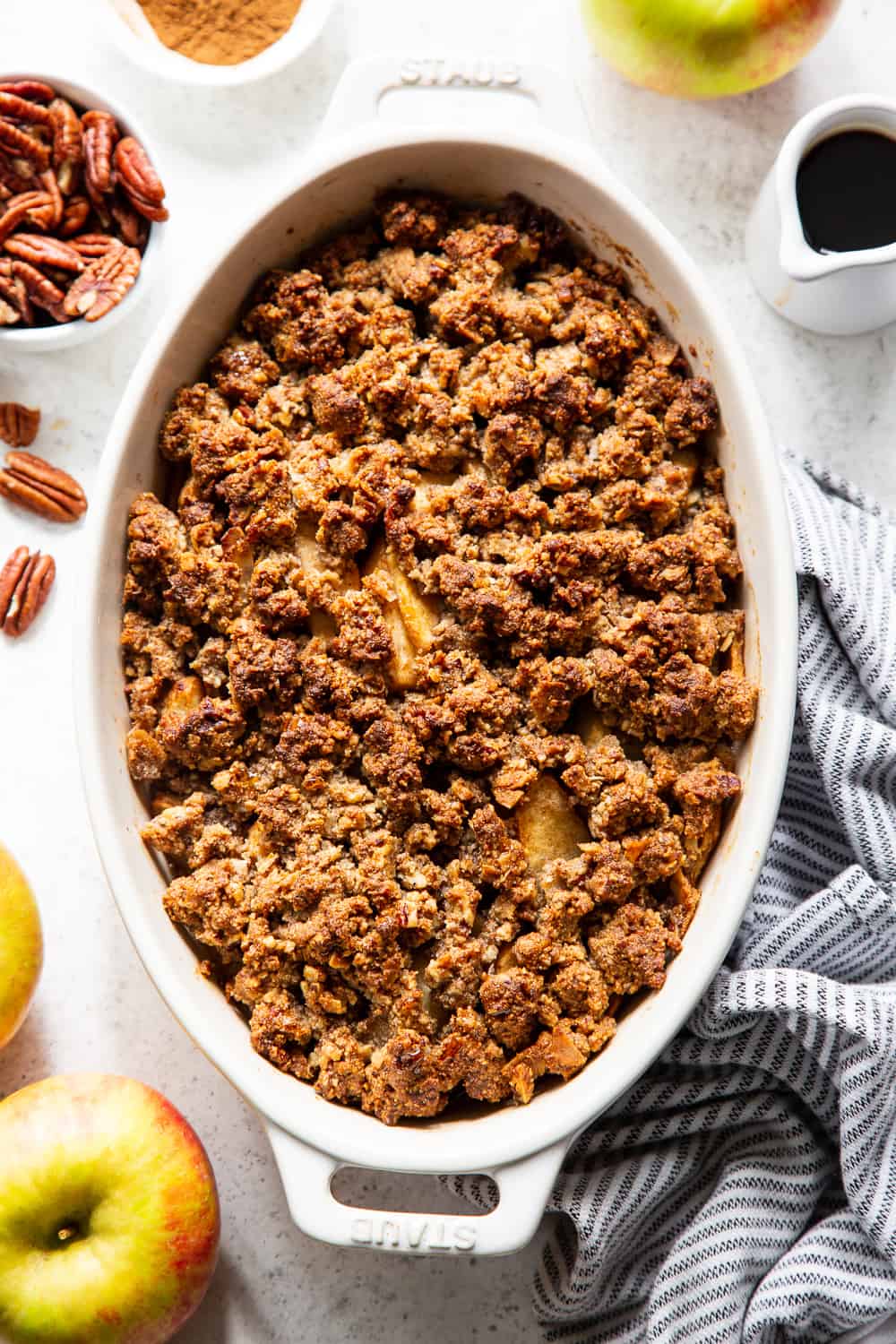 The topping has a taste more along the lines of granola than anything paleo, so the seeds were definitely planted for a few of my homemade granola recipes!

I’ve said before that I used to have a major cereal habit and granola was probably my favorite of all.  I LOVE my paleo versions now!

But let’s get into all the apple crisp details now 🙂

6 apples is the perfect amount for this Maple Pecan Apple Crisp. Make sure that you wash them well, then peel them, core them, and sliced into 1/4 inch thick pieces. 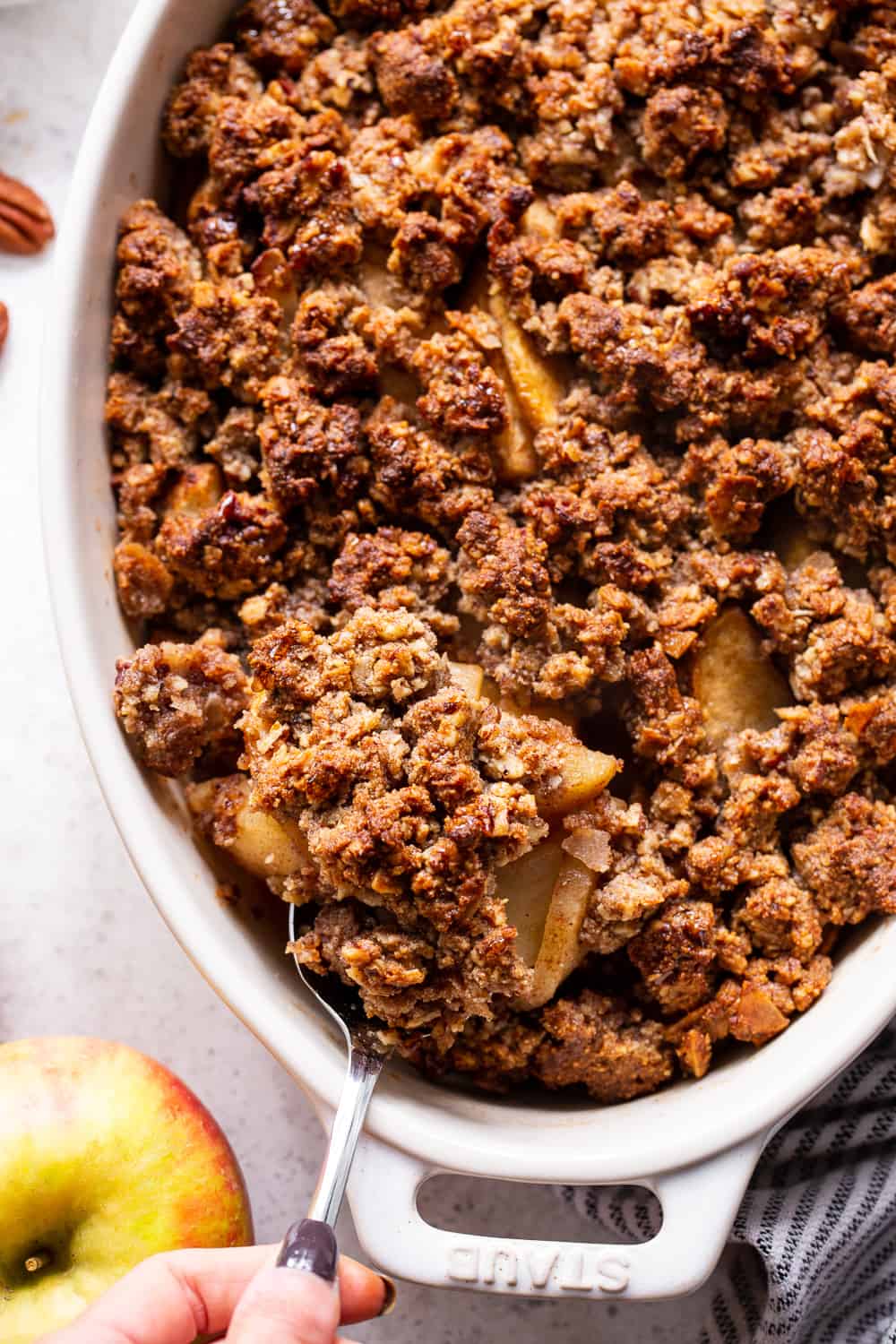 What type of apples should I use?

There are lots of great apple varieties that are perfect for baking and since they’re in season right now, they’re even more flavorful than ever! I used Pink Lady apples but you could also use Jonagold, Honeycrisp, or Braeburn for a delicious apple crisp. 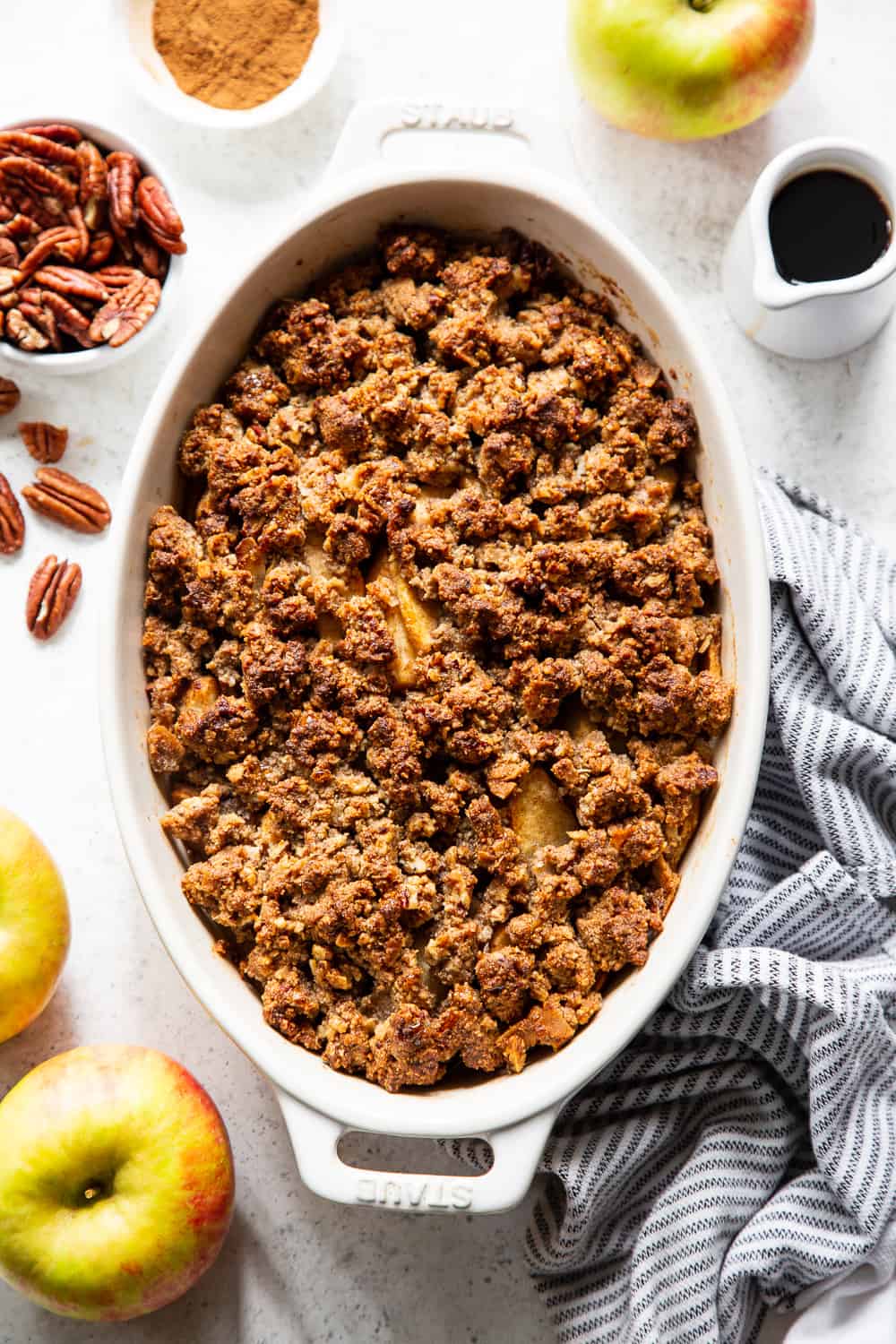 First, you’ll make the filling. Place the apple slices, spices, and maple syrup in a large bowl and toss everything together. Place everything in a baking dish, then set that aside and make the crisp topping.

The crisp topping is so easy – just place all of the ingredients in a food processor and pulse or process until a crumbly paste forms.

Crumble the topping over the apples and bake at 350 for 45 minutes or until the the topping has browned and the apple filling is bubbling. 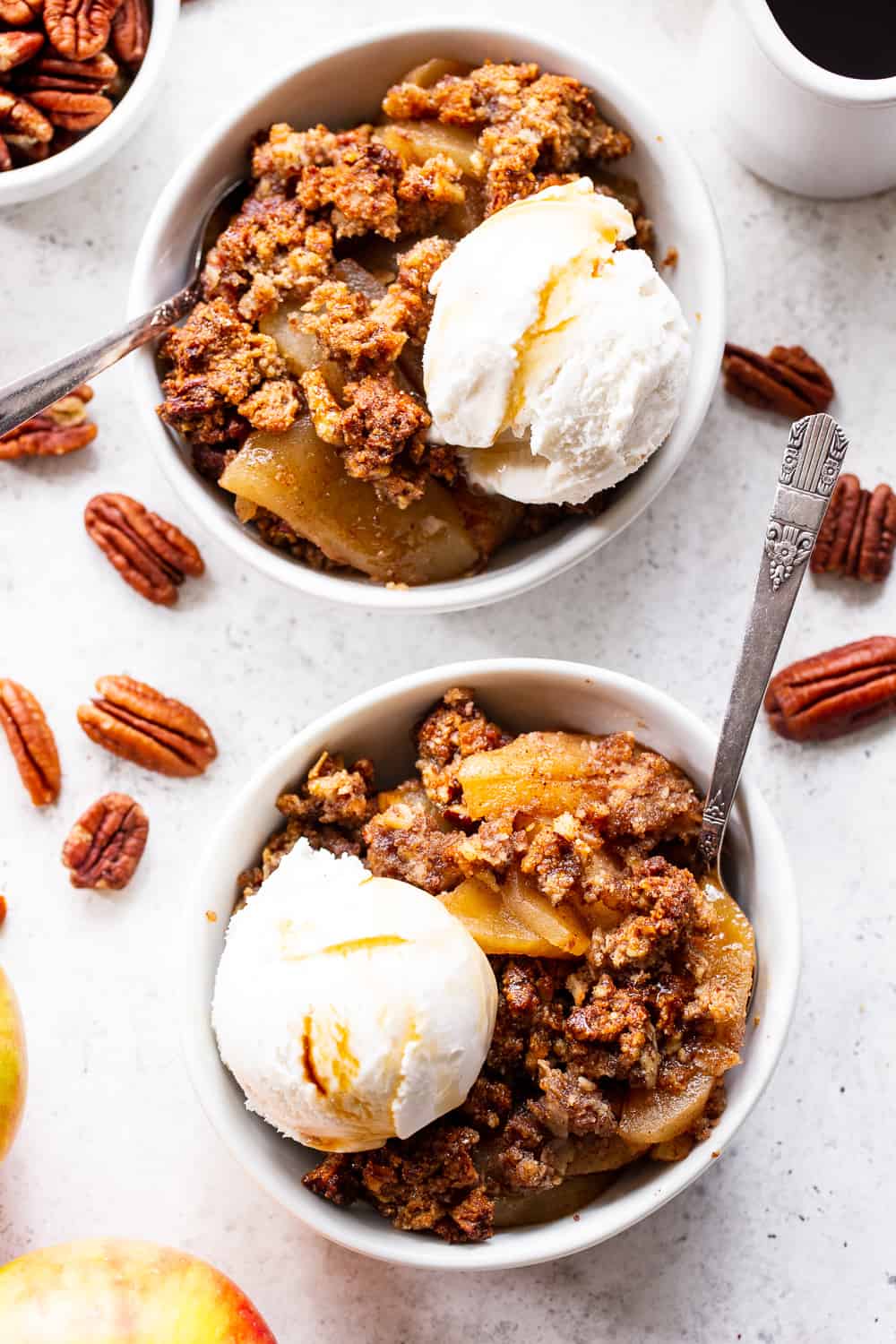 This Paleo Maple Pecan Apple Crisp has become one of our favorite fall recipes. And that says a lot considering that it’s not even made with pumpkin!

In fact, I have a pumpkin sitting around that has my daughter questioning what I’ll make with it every day.

It’s so funny (and cool) that my kids see pumpkins and think about cooking with them.

I don’t think I knew you could cook with a pumpkin until I started eating paleo.  Wild right?!  But it’s time for APPLES now!

Grab your favorite baking dish and get your apples peeled because it’s time to bake – let’s go!

Print this Recipe
Did you make this recipe?
Leave a review
4.57 from 133 votes

*If you have apple pie spice, use 1 tablespoon of it in the topping and 2 teaspoons in the filling, instead of the individual spices.

Want More Paleo Fruit Dessert Recipes?  Try one of these!