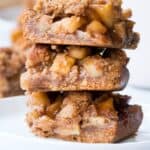 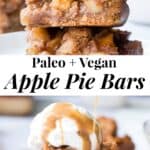 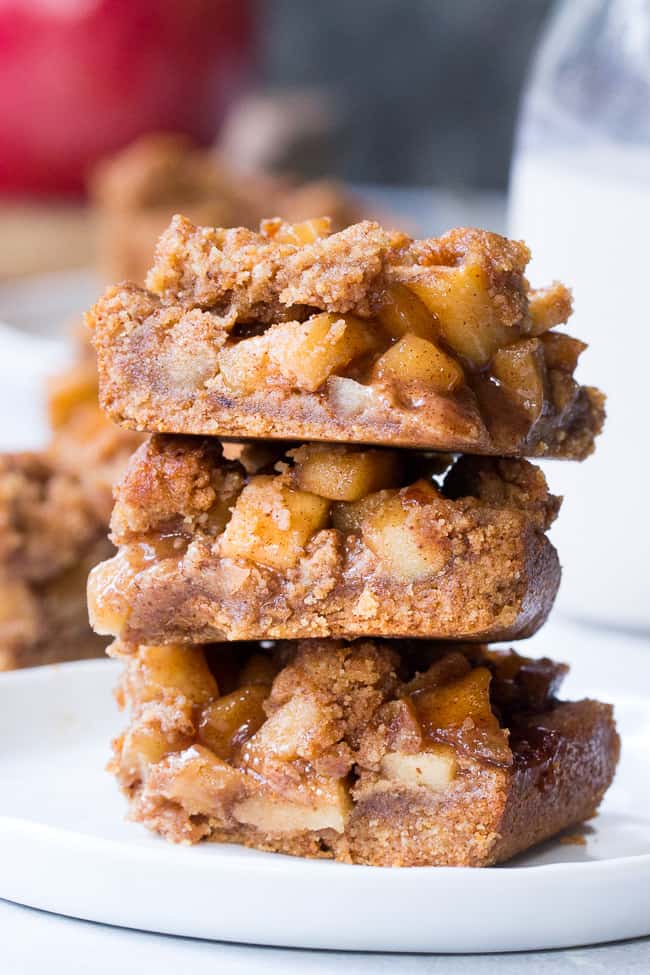 I’m ridiculously excited to finally post the recipe for these apple pie bars.  I think I made them in JULY, and they were a one-shot success (YAY!) so, that means it’s been quite a while since actually eating one. In fact, it feels like 2 years ago – at least according to Diana, my 10 year old.

Apparently the summer was a long one and these apple pie bars got lost somewhere in the first half.  Maybe that’ll teach me to stop trying to work so far in advance – HA!  I’m sort of the opposite of a procrastinator and tend to do things too early, then forget about them or get the timing all wrong and don’t know where to fit them in.  Or, even more often, decide I hate the photos and decide to do the whole thing over. 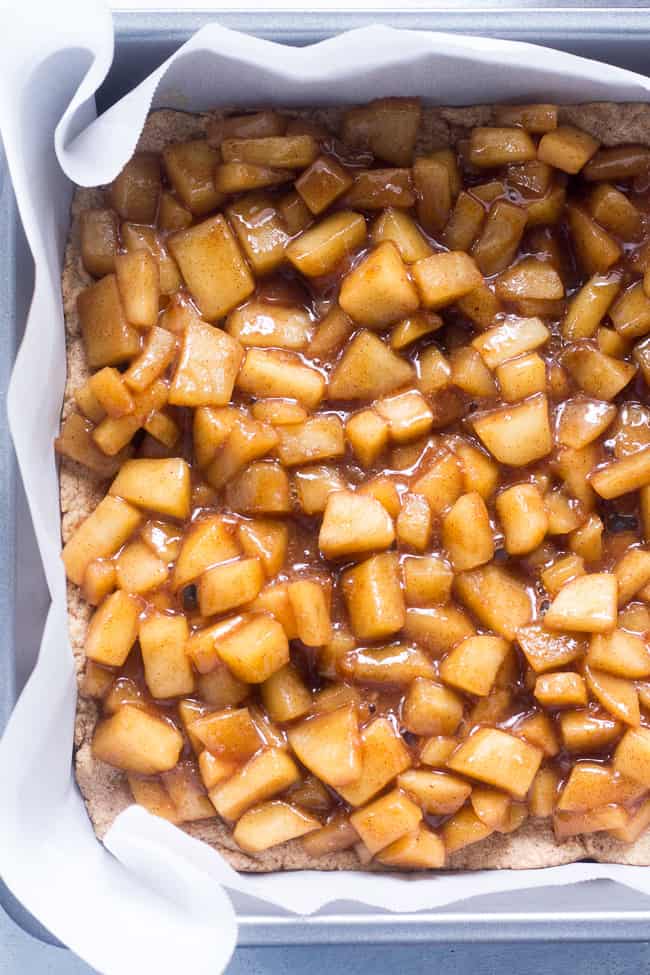 In the case of these bars though, there will be no forgetting – these bars are a real-deal dessert, one you won’t believe is paleo, vegan, made with real-food ingredients and all that jazz.  One of those desserts that disappears overnight once you give your family the green light.  A dessert that makes Adam look at me with the nerve to ask, if, I actually came up with the recipe myself (snort.)  Although I do take that as the highest of all compliments, it’s also, um, just a smidge offensive… 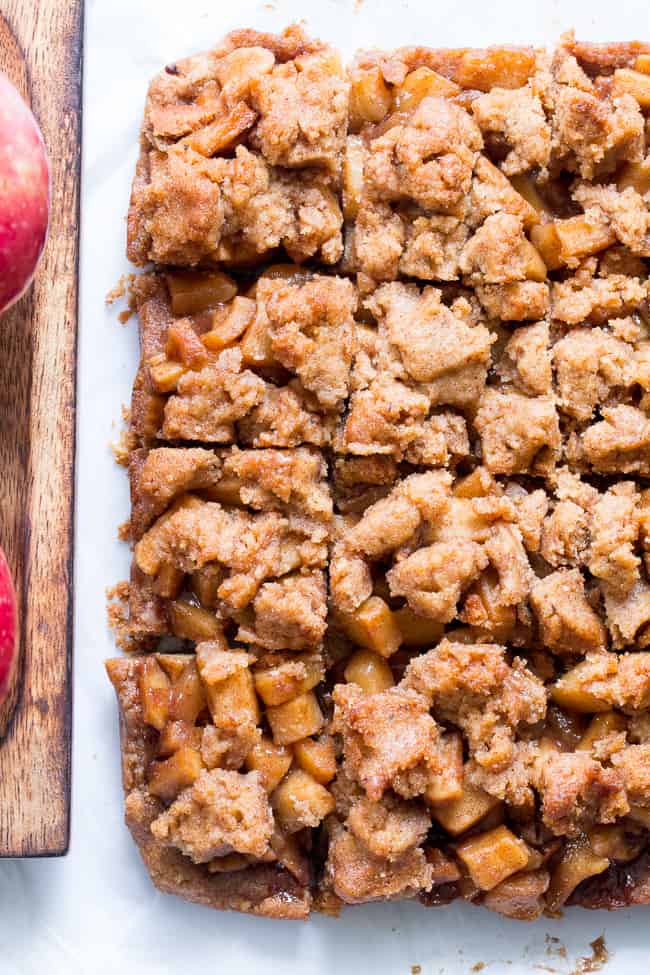 Now, while these apple pie bars are 100% mine, the crust and crumble are based on my almond butter and jelly bars and also soft chocolate chip cookies, which are both out of this world delicious.

When you have a good thing, it makes sense to fit it into as many recipes as possible!  I figured an apple pie version would be a perfect seasonal spin on those bars, and the final version did not disappoint.  Gooey sweet apple pie filling, almond butter cookie crust and topping, and, if you want to go all-out a la mode, a big scoop of ice cream and vegan caramel sauce.  Dangerously delicious is an understatement! 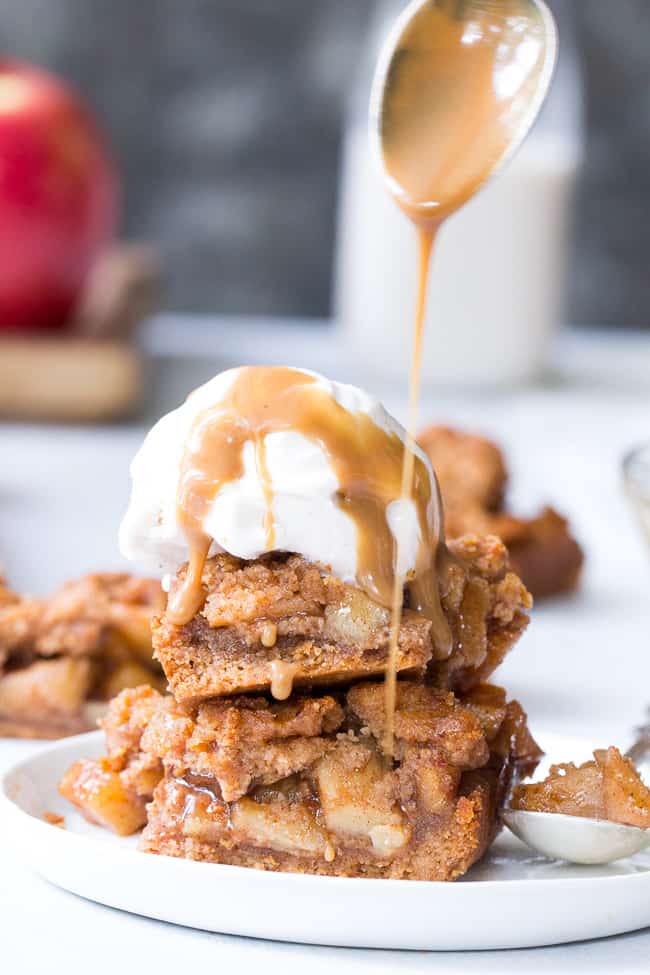 Whether or not you top ’em, these paleo and vegan apple pie bars are going to become a favorite for sure – one even picky kids will love (because even my pickiest did!) and even non-paleo eaters can enjoy.

While you can sub in your favorite nut butter, since the crust relies heavily on almond butter, I suggest using one mild in flavor and nice and smooth for the best result.  Cashew butter would work really well too.  As for the apple filling, you’ll have to do your best to avoid eating it with a spoon before spreading it all over the crust – it’s dessert all on its own!  Are you guys ready to bake?  Let’s go! 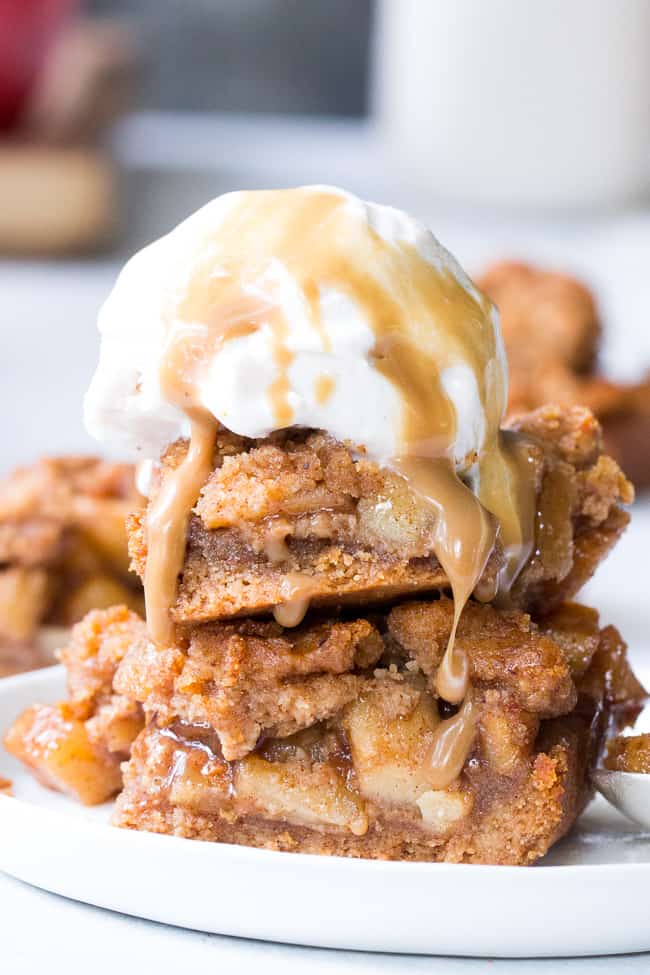 These Paleo apple pie bars have a delicious almond butter crust and crumb top and perfect apple pie filling!  They're a fun fall dessert to make and eat with kids, gluten-free, dairy-free, paleo and vegan. 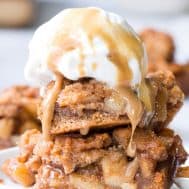 Print this Recipe
Did you make this recipe?
Leave a review
4.52 from 230 votes

For the Optional Caramel Sauce

*from one small can, full fat coconut milk may be used as well

**Nutrition info does not include optional caramel sauce

What I Used to Make My Paleo and Vegan Apple Pie Bars:

Want More Paleo Apple Recipes?  Try One of these!