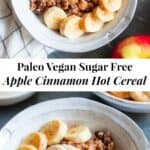 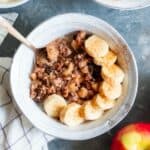 This easy Apple Cinnamon Paleo Hot Cereal is ready in just 10 minutes, free of added sugar, Paleo, and vegan.  Just as delicious for an afternoon snack as it is for breakfast! 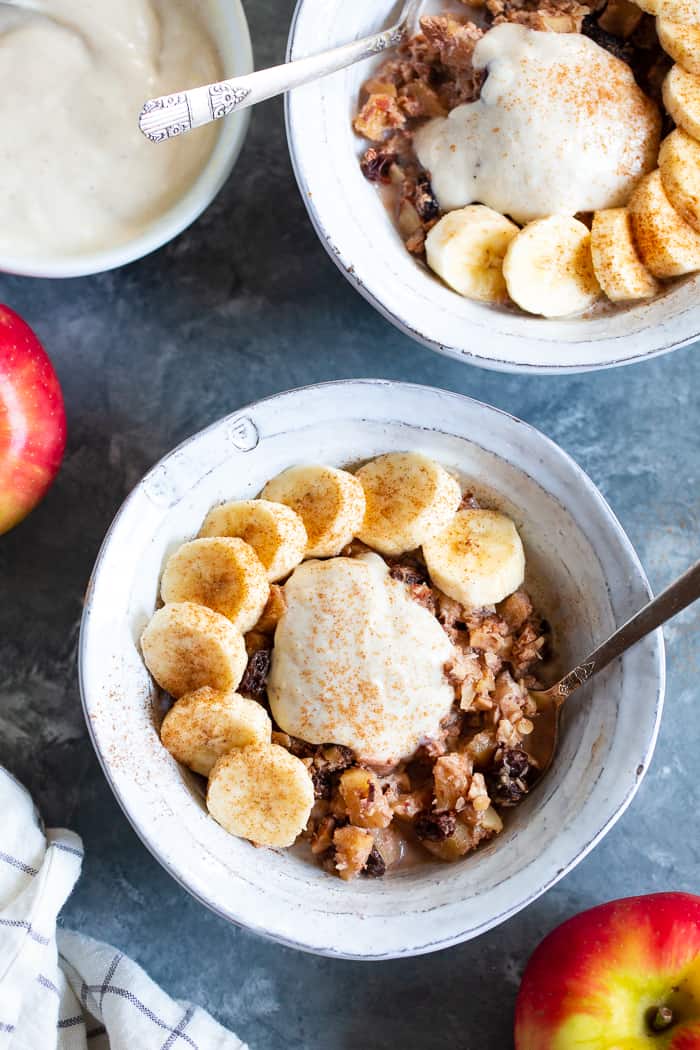 I’m sneaking in a recipe today!  On a Thursday – yes – this is the day I typically ramble on about thoughts and life, but, I thought you might want to get in on this preeeetty spectacular Paleo breakfast recipe.

A breakfast recipe, that – oh yes my friends – is SWEET and contains no eggs.   Sometimes I just don’t want eggs.  Or kale.  Or meat.

Dare I say even bacon for that matter?  (Sounds crazy, but I’ve been on bacon overdrive lately and I’ve had enough.  For one day.  And yes I know bacon is a meat, but it goes in its own category as far as I’m concerned.)

I guess I’ve also been having a whole lot of fun creating clean-eating recipes with my apples lately, and had to see what else I could do.  Don’t you guys love the cinnamon apple combination?  Heck yes, for me.

I also find that cooked apples are so much more pleasant on my digestion than raw, and I’m always happy to find new ways to cook them. 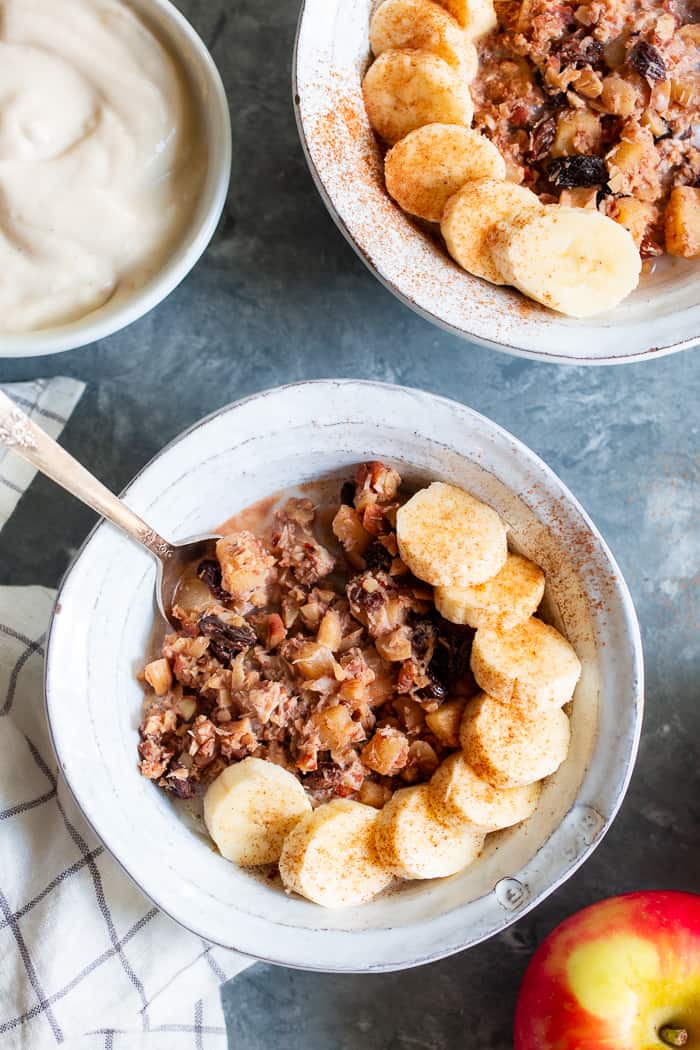 What Do I Need to Make Apple Cinnamon Paleo Hot Cereal?

The ingredients are super simple!  Here’s what you’ll need:

Large Apple (or 2 smaller ones)

Raw Nuts (use your favorite!) 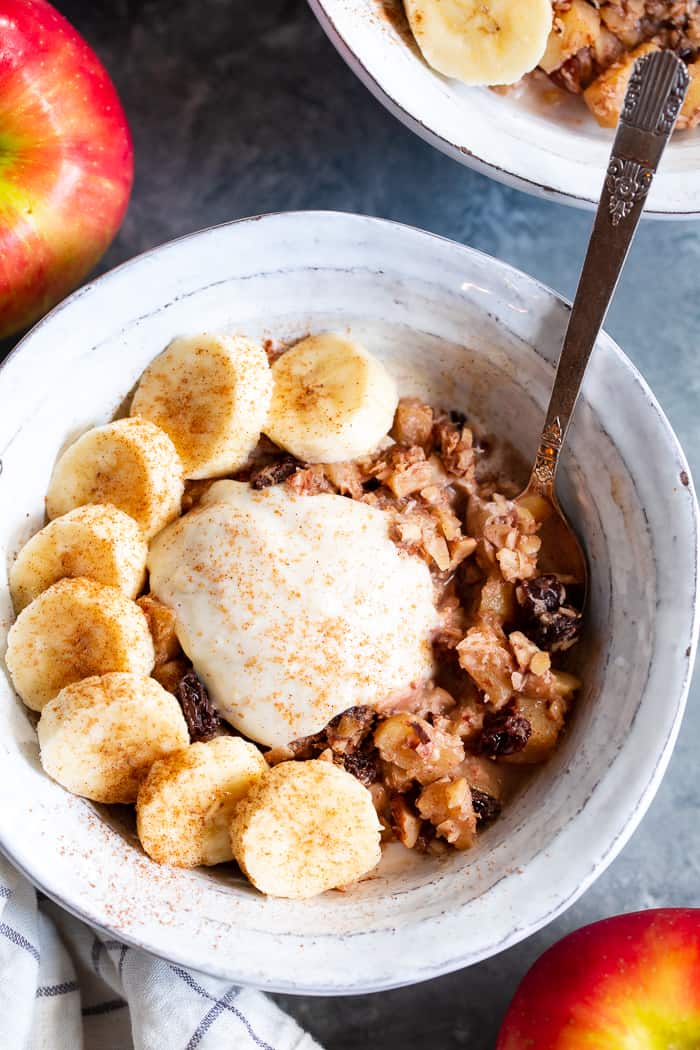 How Long Will it Take to Make Paleo Hot Cereal?

From start to finish, you can make this cereal in just 15 minutes for the quick version.  If you want a softer cereal you can cook it longer, with a bit more almond milk.

If you have NO TIME in the morning – whatsoever – you can make the entire thing the night before – minus toppings – and simply top with a bit of almond milk, heat, top and eat.   The leftovers might even taste better the next day!

What Are Some Good Toppings for this Apple Cinnamon Paleo Hot Cereal?

As far as toppings go, the sky’s the limit (the sky, or paleo, however you view it!)

The first time I made this I went with sliced bananas and coconut butter for me, almond butter for Adam.  The second time, I added bananas and nothing else and it was perfect.  I also love topping it with dairy free, paleo friendly yogurt (think coconut, cashew, or almond yogurt) and just a little bit of maple or honey (love this Manuka honey!) if I want extra sweetness.

Add whatever suits your mood, or add nothing at all, up to you! 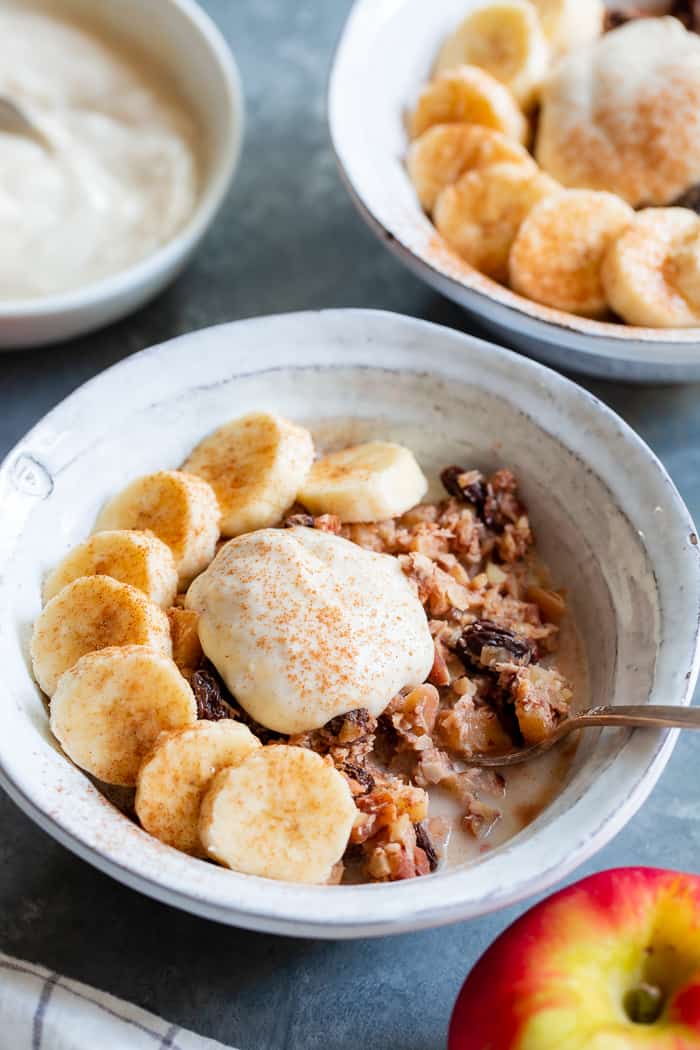 The last great thing?  You can eat this any time of day and it just WORKS.  Breakfast, lunch, light dinner (if you roll that way), even dessert.

I actually just had this for lunch because I’m rushing to get work done before picking up the kids, and I had leftovers in the fridge!  You’ll love that it’s sugar-free (so not quite a baked-good) but still has some sweetness to it, along with healthy fats.

I hope you’re ready for this seriously delicious, grain free, vegan, and paleo hot cereal!  Let’s grab those apples and nuts and all the other yummy stuff in this cereal – time to go! 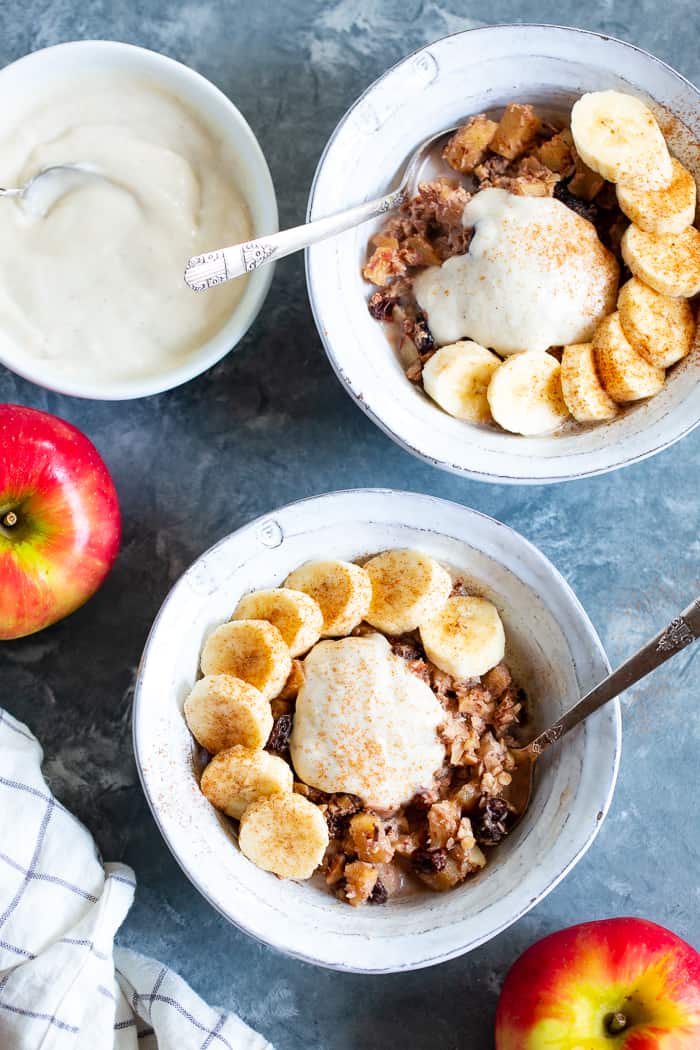 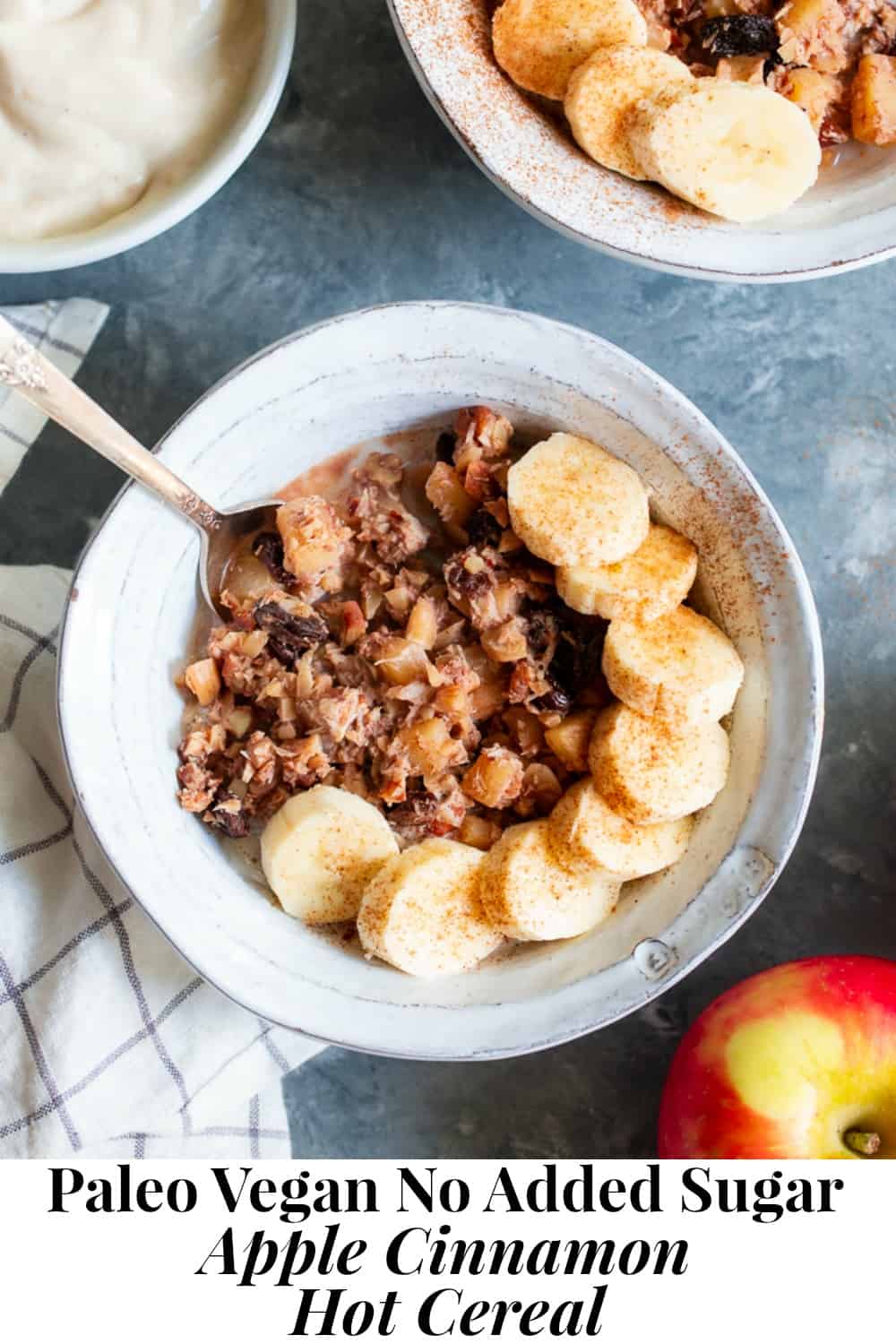 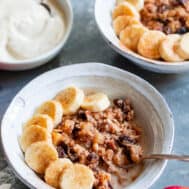 Print this Recipe
Did you make this recipe?
Leave a review
4.61 from 69 votes

For the hot cereal:

Toppings to serve with:

*If you have more time and want a softer hot cereal, you can add 1/4-1/2 cup more almond milk and simmer about 10 minutes longer, or until desired consistency is reached.

**You can also drizzle with a little of your favorite sweetener, like maple syrup or honey, or sprinkle with coconut sugar and extra cinnamon.

Want more sweet Paleo breakfast recipes?  Try one of these!

Paleo Hot Cereal on the web: