This easy Apple Cinnamon Raisin Breakfast Bake is free of added sugar, Paleo and vegan.  Loaded with flavor and great topped with bananas and drizzled with coconut or nut butter! 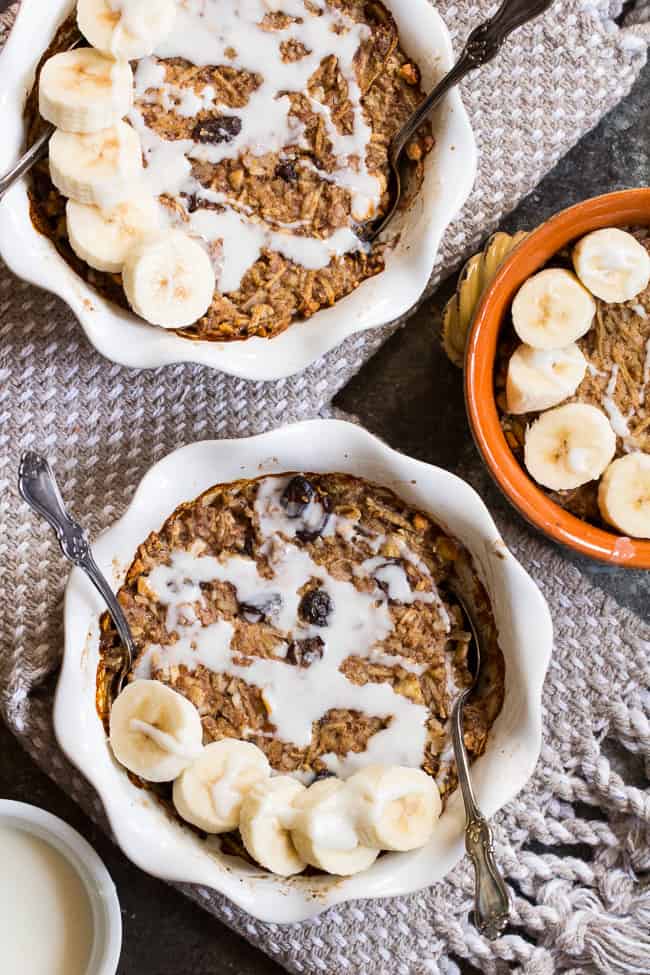 Ever since you guys went wild over my easy apple cinnamon hot “cereal” last year, I’ve been meaning to tweak the recipe to create a baked version.  Sort of like a baked oatmeal with no oats.  Sounds good, right?!

As good as it’s been sounding to me for months, it didn’t actually happen until after apple picking a couple of weeks ago – when I was making everything I could involving apples (of course) and finally decided it was time!

Luckily, the first time around it went exactly as planned – score TWO for grain free hot cereal.  Although, I’m using the word “cereal” loosely – we are talking about apples, nuts, coconut, and almond milk.  Yet somehow, it all comes together and just WORKS! 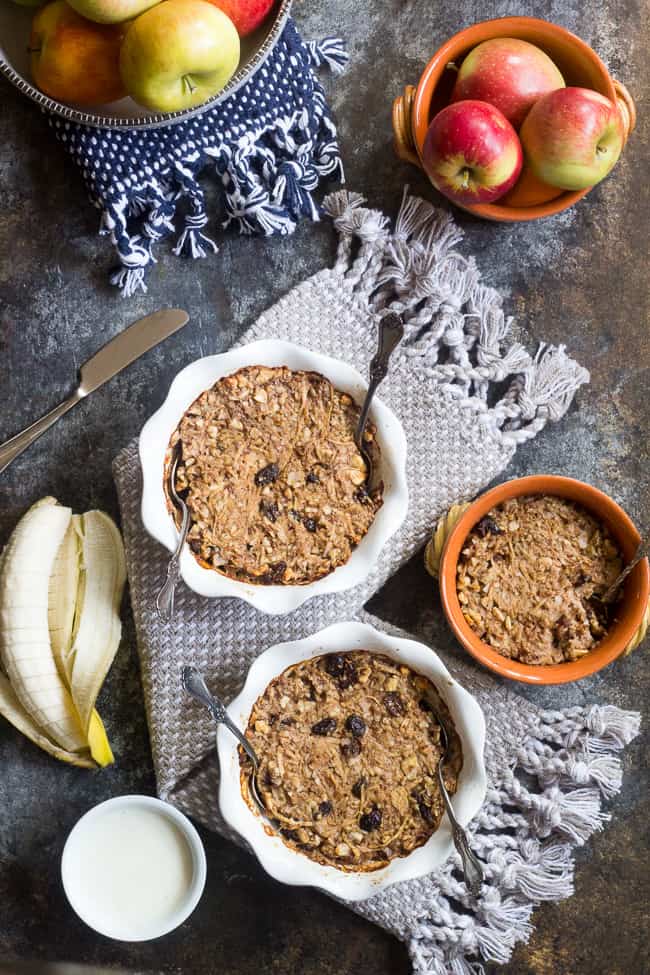 While I used the same, or similar, basic ingredients as I did with my hot cereal, I made several changes to turn it into a breakfast bake.

But first, the criteria.  I wanted it to remain paleo, vegan, and Whole30 compliant (no added sweetener.)  This meant that for the “binding” factor, I couldn’t rely on eggs.  Oh, how I love to rely on eggs!

BUT!  As I’ve discovered over the past year while experimenting with vegan and grain free baking, “flax eggs” can do the same thing as eggs – especially when you need them as a binder (they don’t provide “rise” the way eggs do, though.) 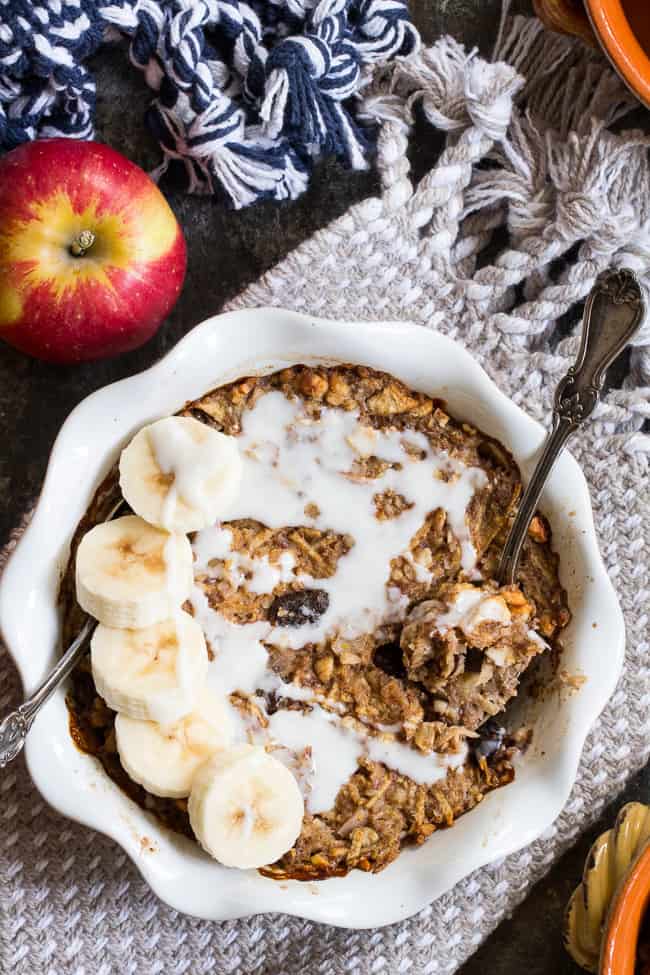 Plus, who wouldn’t welcome the addition of a little flaxseed into their morning, right?!  It sounds so healthy and breakfast-y, and it is, too (did that make sense?!)

Anyway, aside from the flaxseed, the other differences involve both getting great flavor and the right texture.  First, I decided to toast the nuts and coconut in a bit of coconut oil and sea salt.  Optional step,  but worth it in my opinion!

Second, I used my food processor to shred the apples and grind up the nuts and coconut, rather than chop both by hand.  I love the texture that this method produced in the final product! 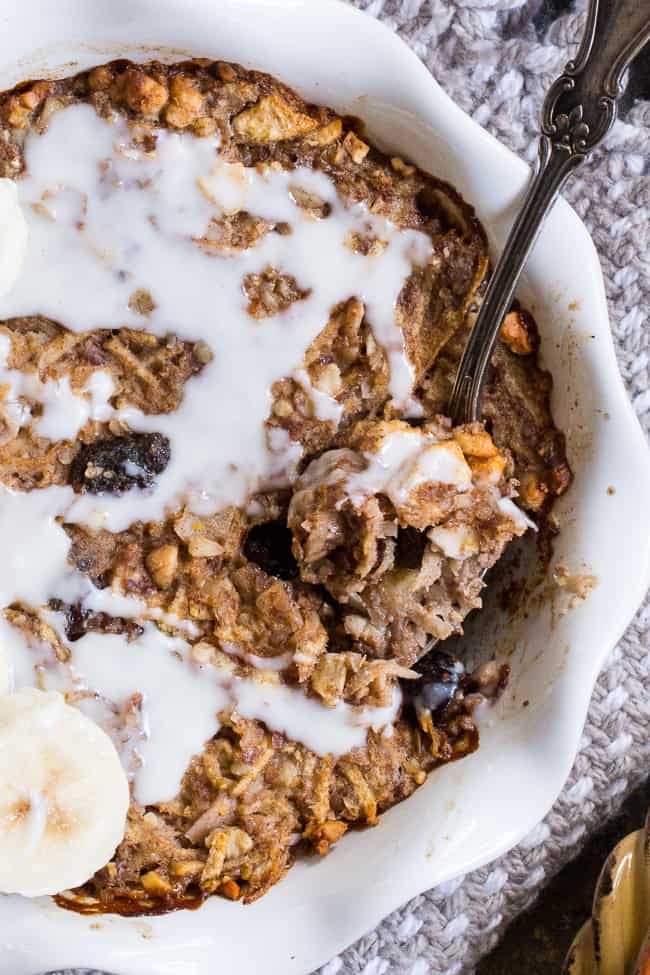 Then, we mix with almond milk, the flax eggs, raisins (or dried cranberries or cherries), and warm spices and BAKE!  You can bake this in one bit 9″ baking dish, or in smaller dishes if you prefer.

The baking time will need to be adjusted slightly depending on the size of your dishes, but it’s extremely forgiving!  Once the top is browning and the center is set, you’re good to go.  After baking, you can top to your heart’s desire with sliced bananas and a drizzle of your favorite nut butter or coconut butter.

And, just a hint, if you’re not doing the Whole30, you really can’t go wrong with a little bit of pure maple syrup 🙂

Are you guys ready to get started?  I know you’re going to love this!  Let’s go! 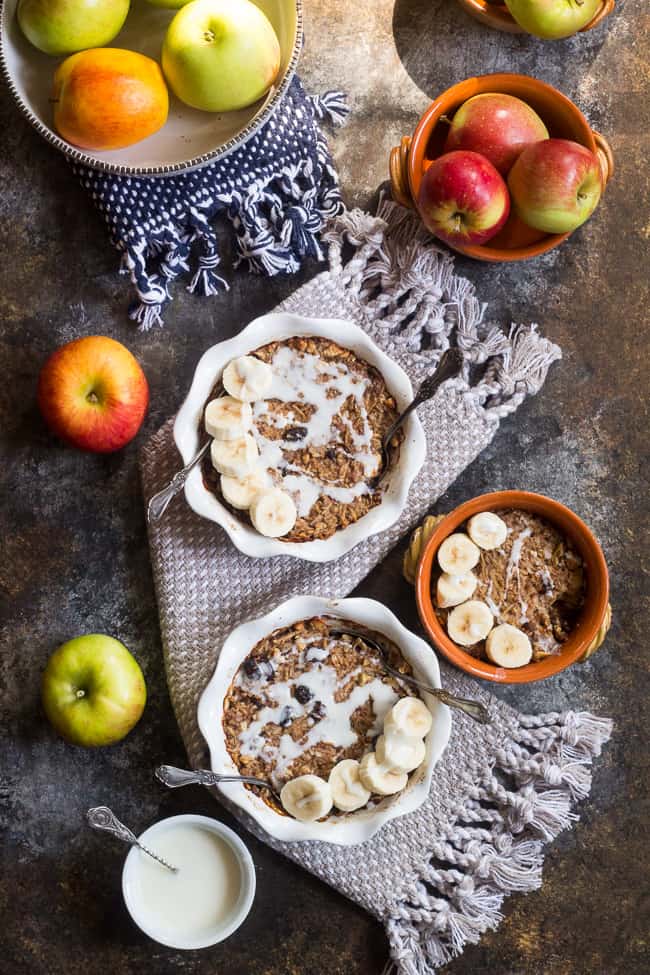 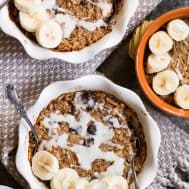 Print this Recipe
Did you make this recipe?
Leave a review
4.15 from 27 votes

*You can find cranberries without any added sugar here.

**I used a combination of cashews and pecans based on what I had but you can also use almonds and walnuts.

***Nutrition is calculated without the optional toppings

What I Used To Make My Apple Cinnamon Breakfast Bake:

Want More Paleo Breakfasts on the sweet side?  Try one of these!

Sweet or savory in the morning?