Creamy Baked Spinach Artichoke Dip that you won’t believe is dairy free!  Super creamy and packed with flavor, this dip is great for veggies, chips, and as a topping or spread for potatoes, chicken and burgers.  Paleo & Whole30 compliant. 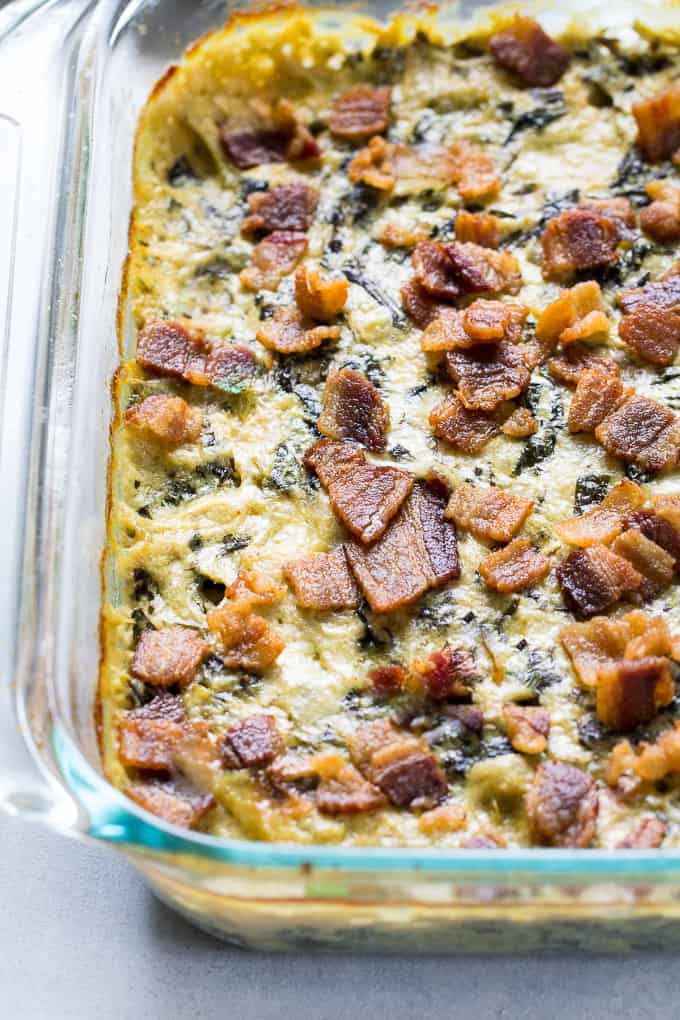 We have had entirely too many rain days, AKA bad-photo days for me lately.   In fact, I almost delayed posting this yummy spinach artichoke dip recipe because of it.

Adam came home from work and heated up his dinner (which happened to be a burger and sweet potatoes topped with some of this dip) and then witnessed me obsessing over my recipe photos to the point of near-tears because I was convinced  that I needed to re-make the recipe on a sunny day to get better photos.

He checked out the photos, said they were fine, and asked me where the recipe was so he could take some for breakfast the next day.

And, he then asked me what exactly he was eating because “the topping is really good.”  Yup, this actually happens quite often.

But anyway, after making the connection, he told me that I definitely don’t need to make it again because it’s delicious and the pictures are fine.  And really the last thing I needed at that moment was another disappointing photoshoot with this dip, plus another huge batch of dip.  Even if we both ate it for every meal for 5 days straight, we wouldn’t put a dent in batch number two.   And now, my rainy-day-dip sob story comes to a close. 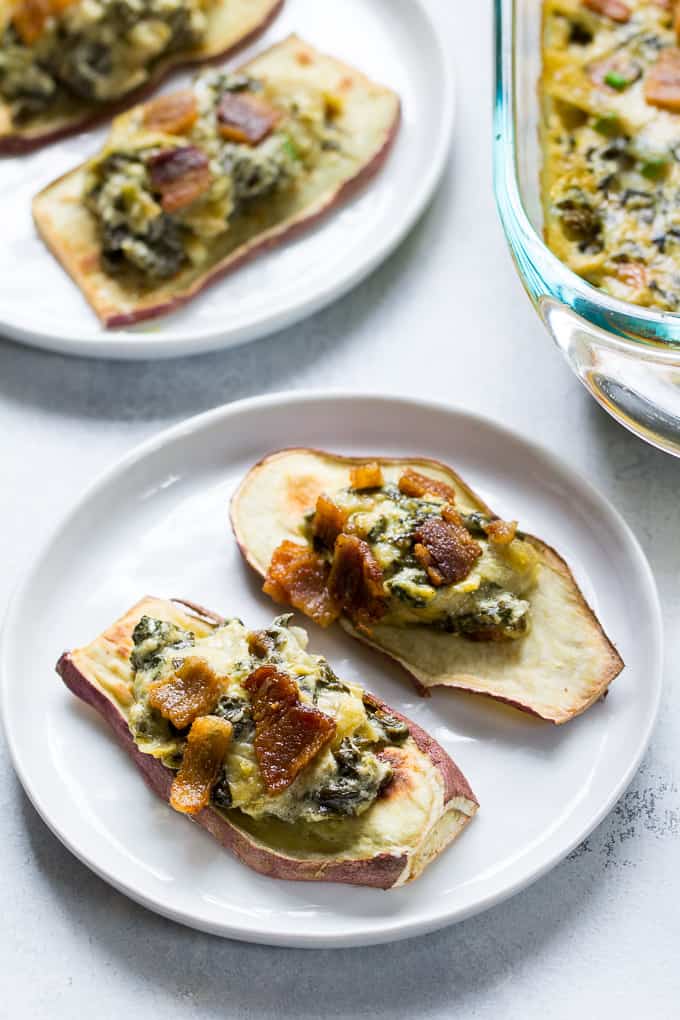 Even though I only made one batch, we’ve definitely been eating our fair share of this dip with everything from veggies, to sweet potatoes (sweet potato “toast” is pictured), to burgers, chicken, even a breakfast hash.  To be noted, Adam claims that he does not like spinach nor artichokes, but he does in fact love this dip.  (Between you and me, I think this Whole30 is changing his tastes more than a little bit!) 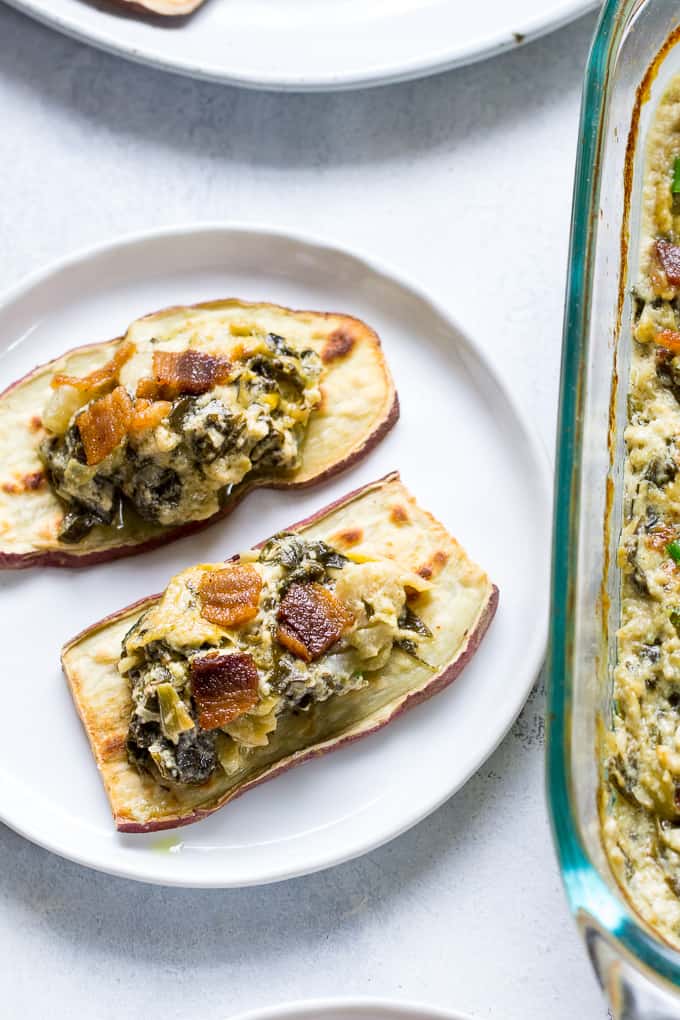 The “creamy” base of this dip tastes downright cheesy, thanks to a mixture of coconut cream, paleo mayo, nutritional yeast, lemon and spices.  It does separate a bit when you bake or reheat, however, I easily re-combined by simply mixing with a spoon.

It’s thick and creamy, packed with flavor and – yup – topped with bacon!  This part is optional of course and I guarantee you will love this baked spinach artichoke dip with or without bacon.   One last note – I used fresh baby spinach, however you can just as easily sub frozen, thawed and drained spinach here without a problem.  Ready to start?  Let’s go! 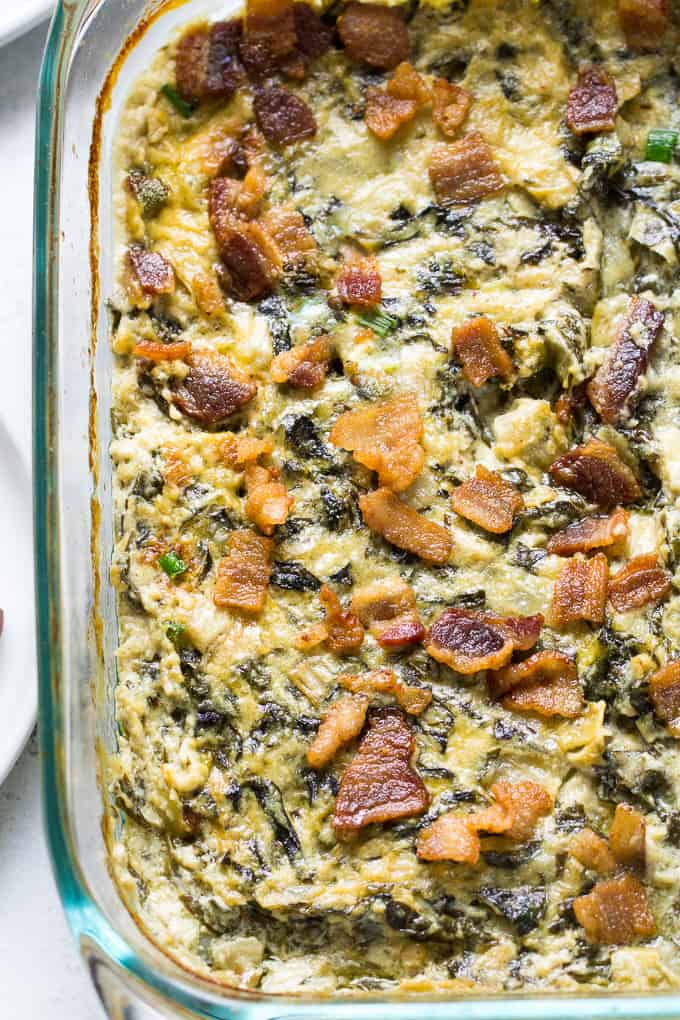 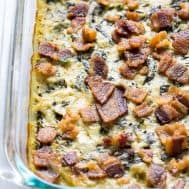 Print this Recipe
Did you make this recipe?
Leave a review
4.74 from 26 votes

For the "cream" mixture:

For the spinach artichoke mixture:

*The cream will be hard, so blend or whisk well before using. You can also use the equivalent of about 2/3 cup of canned coconut cream which you'll also need to blend.
**If the dip separates, simply mix gently with a spoon to re-combine.

What I Used to Make My Creamy Baked Spinach Artichoke Dip:

Want more delicious, versatile Paleo dips?  Try one of these!

Ever cook things that your family loves, yet they have no idea what they’re eating?

If you’re doing a Whole30, is it changing your taste for different foods?