Fresh citrus grilled shrimp and zoodles create a light, healthy and super tasty lunch or dinner!  A cilantro, lime, and orange vinaigrette acts as both a marinade and dressing for the dish, which can be served warm, or cold, as a zucchini noodle salad.  Gluten free, paleo, Whole30 friendly. 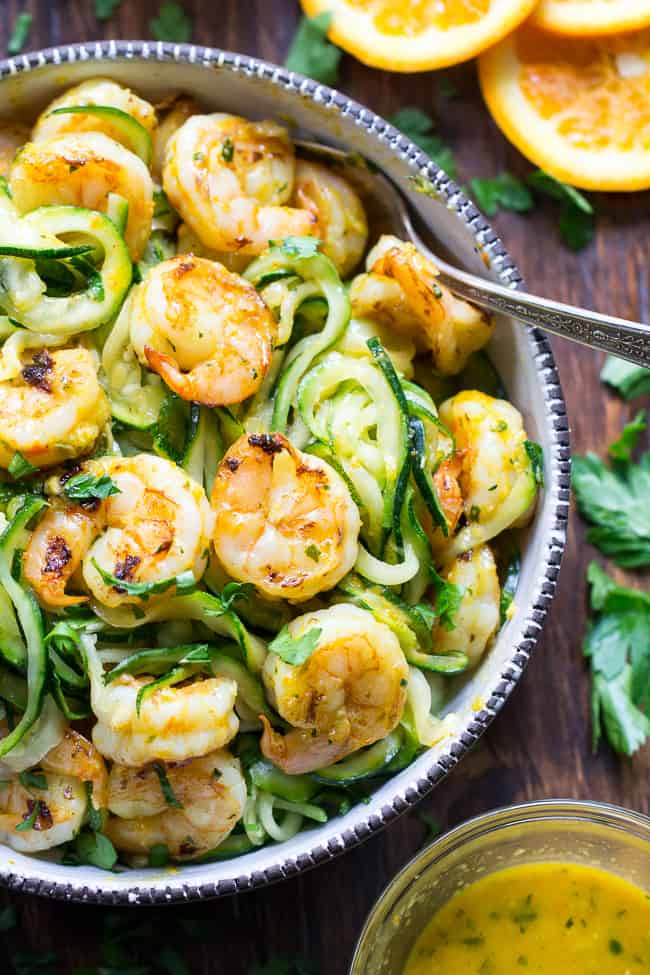 It’s possible I’m just trying to rationalized my zoodle mania at the moment, but I truly don’t think you can ever have TOO MANY zoodle recipes.  Just in the same way no one would complain about too many pasta recipes – it’s just not possible to overdo it, in my opinion.  Especially when it’s summer, and summer squash seems to be abundant everywhere you turn.

Whether you grow your own or buy, I find it difficult to ignore the amazingly versatile green summer squash.   From chocolate to blueberry muffins to savory zoodles galore, you can always find a delicious way to use it for whatever you’re craving! 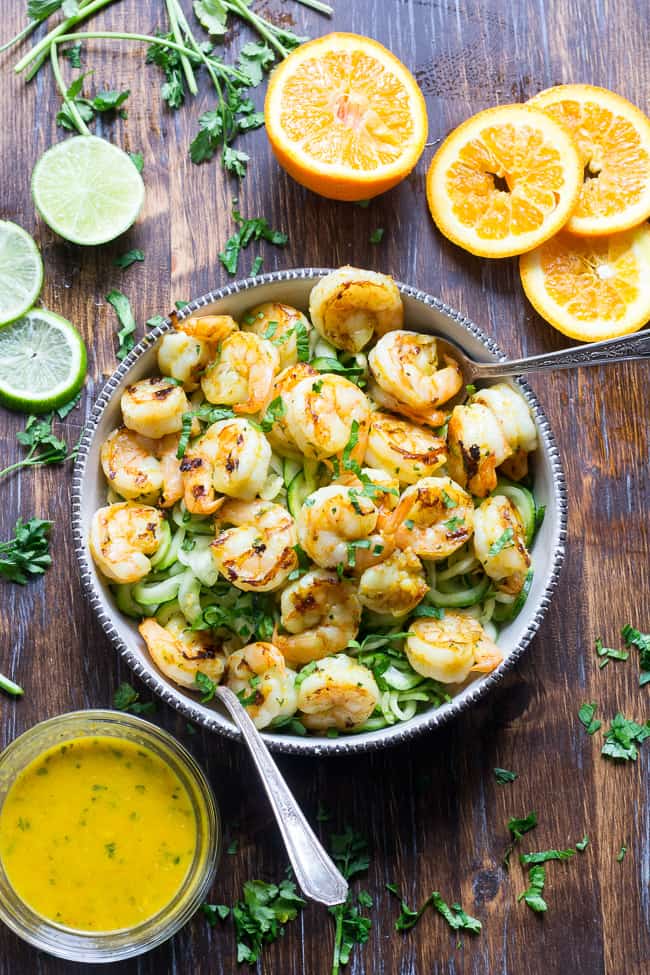 Anyway, while I definitely haven’t ignored zucchini, I HAVE been ignoring seafood for the most part.  Ugh, I really should stop doing that!  Unfortunately seafood doesn’t always get the best response around here, although shrimp is usually a winner.  Especially when paired with citrus!  Since it’s typically go-big-or-go-home for me, I went a little wild with the citrus in this recipe, and it complemented the shrimp so well. 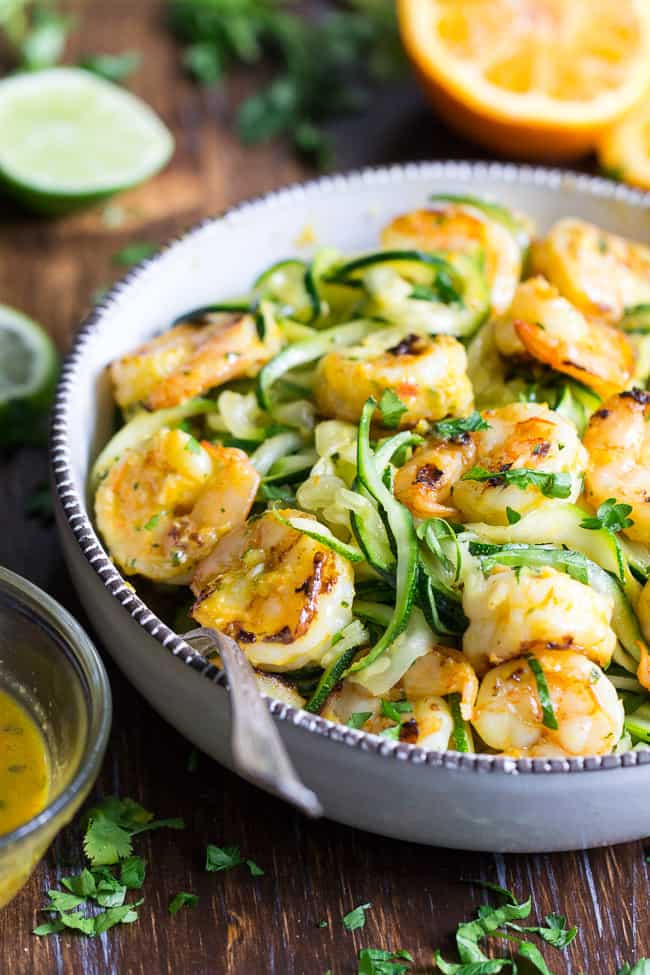 To start off, I knew I wanted lime and cilantro – they seem to hate being separated, don’t you think?  However, I also wanted to sweeten it up just a bit with fresh orange juice PLUS just a touch of honey (if you don’t need to be Whole30 compliant.)  Truthfully, the honey is so minimal that you won’t miss it at all, and perhaps a splash more of orange juice would make up for the tiny bit of lost sweetness. 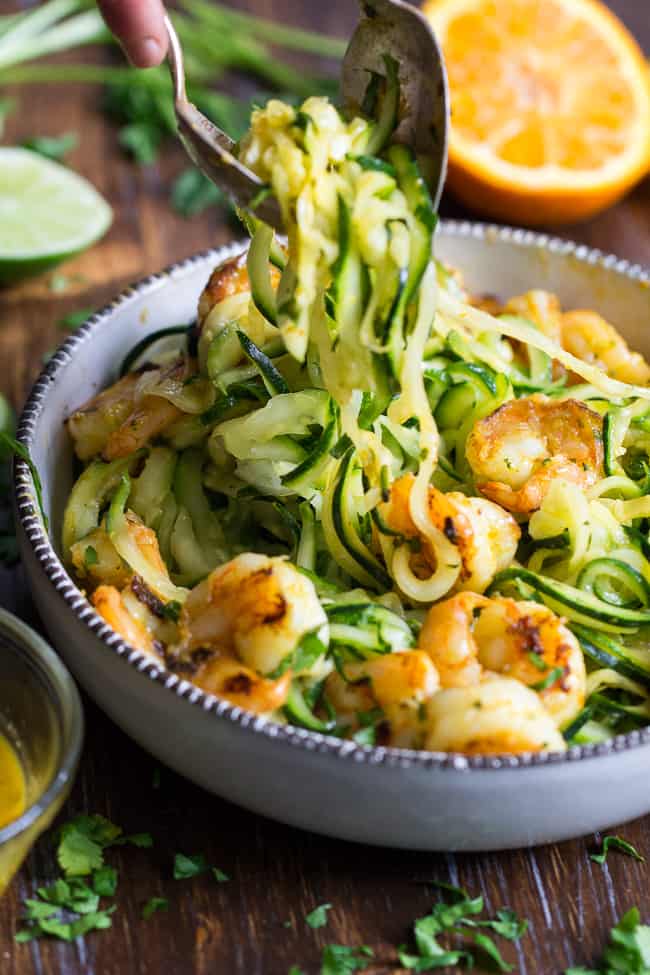 The dressing/marinade also contains both the zest from the lime and orange, which provides lots of tartness for the shrimp.  Make sure you grate the zest very finely and ONLY the colored part, not the white pith which can add bitterness.  The marinade is also flavored with quite a bit of garlic, so make sure to adjust to your preference, if necessary.

The same goes for the pepper you use – if you prefer your shrimp with some spice, adding chipotle pepper instead of black will make you swoon, I promise.  I’m a huge chipotle pepper fan, however, a little bit goes a long way, so add with caution if you decide to go that route.  As you can see, I’m giving you lots of options here with this dressing, but you really can’t go wrong no matter what you decide on. 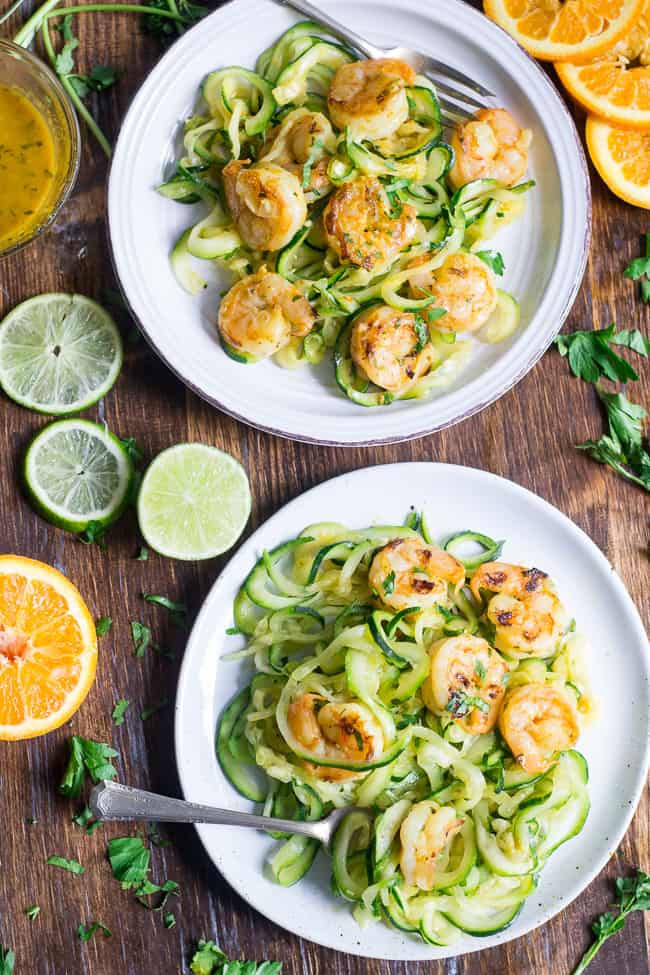 The rest of this dish is easy peasy (lime) squeezy.  You marinate the shrimp for at least an hour, then grill and toss with your zoodles and the remaining dressing.  You can serve this cold/room temp, as a zoodle “salad” as I did, or lightly sauté the zoodles before tossing to have more of a “pasta dish”.

Either way, make sure you follow the directions in the recipe for “sweating” your zucchini noodles so you don’t wind up with overly watery zoodles.  Essentially, you salt them so they release tons of water over the course of an hour, and then drain all the water released.  No matter what I’m doing with my zucchini noodles, I always make sure to get as much water out of them as possible and it improves the taste and texture of the final dish.  Happy spiralizing, happy eating – now let’s start cooking! 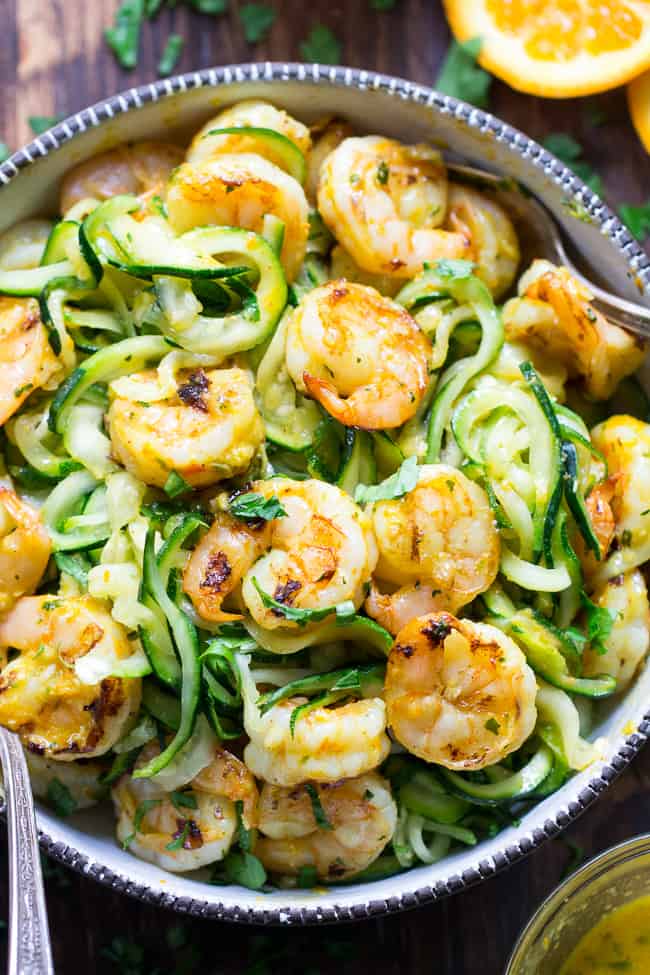 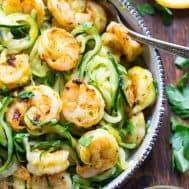 Print this Recipe
Did you make this recipe?
Leave a review
4.36 from 17 votes

What I Used To Make My Zucchini Noodles:

Want More Paleo Zucchini Noodle Ideas?  Try One of These!

Do you prefer your zoodles hot or cold?