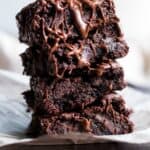 These are the most delicious fudgy paleo and vegan brownies that you’ll ever make!  Raw cacao, unsweetened chocolate and chocolate chunks make them extra chocolatey with rich flavor and chewy fudge-like texture.  Kid approved, gluten-free, dairy-free and great when you need a healthy chocolate indulgence! 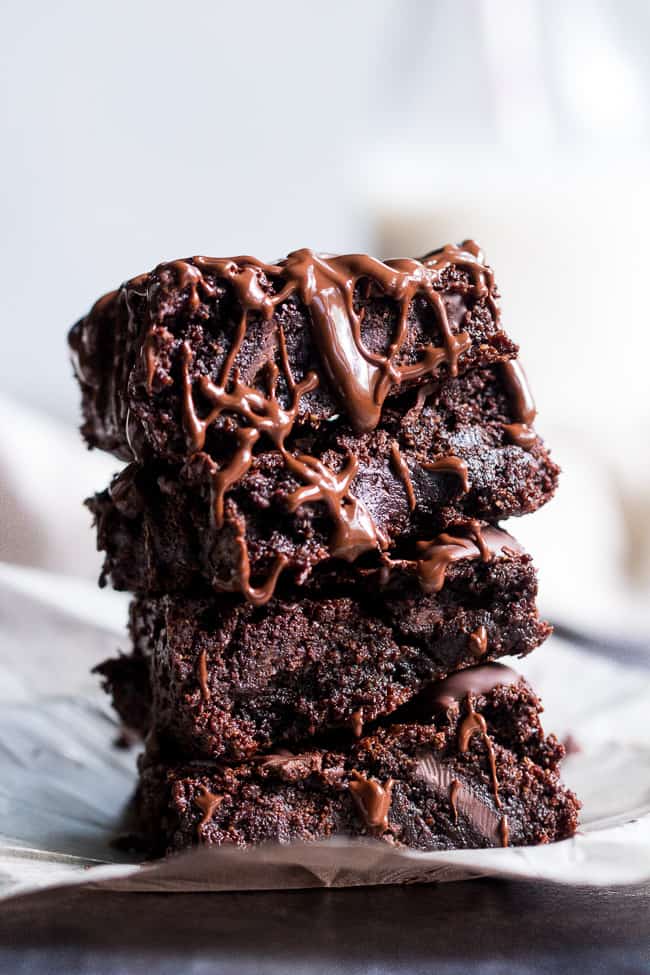 Brownies are one dessert that everyone can get excited for, don’t you think?  Even my 6 year old son, Drew, who claims to not like chocolate (okay fine, to not like DARK chocolate) is always up for a paleo brownie.   Even the ones with sweet potato in them!  Seriously, chocolate actually DOES win, every time.

I recently revisited one of my old favorite brownie recipes – these double fudge almond butter brownies – and decided to update them – mainly because I am nearly incapable of making the exact same recipe twice.

Plus, I’m truly horrible at following my own recipes to a T – sort of like those reviewers you see on recipe sites who change everything about the recipe and are then very confused/angry about what went wrong?  Well, that’s me, except on my own flipping website.  I’ll freak out that my own recipe sucks until I realize that I actually didn’t follow it.  Oops. 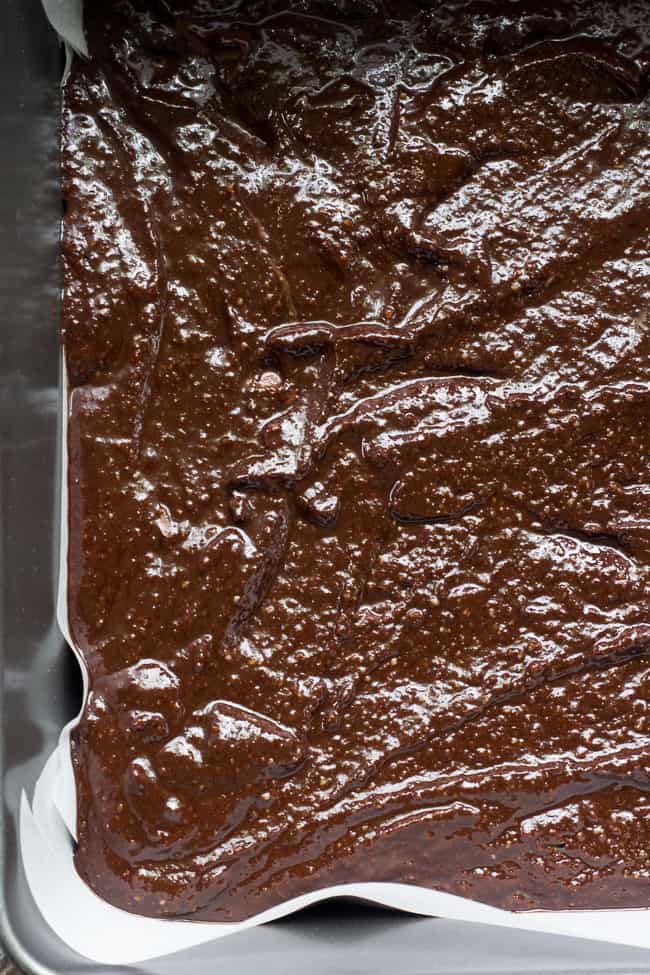 That said, sometimes my impulsive recipe variations lead to good things – like in this case.  I’d been DYING to try flax eggs in a couple of my recipes after hearing great reviews from readers who’ve subbed in flax eggs to make my dessert recipes vegan.  I have a constant supply of ground flaxseed in my fridge anyway, so figured the easiest place to start would be with brownies.

So, I tweaked a couple of things about that old brownie recipe, plus subbed in 2 flax eggs for the egg + egg-yolk in the original.  I got rid of the fudge topping because good ‘ol melted chocolate seemed just as delicious.  Then, I prayed.  Well, not exactly, because I don’t stress about brownie recipes all that much – they get eaten regardless of the result.  I mean seriously, BROWNIES.  How bad can they be?!  The batter alone is worth eating, so, you really can’t go wrong, I think. 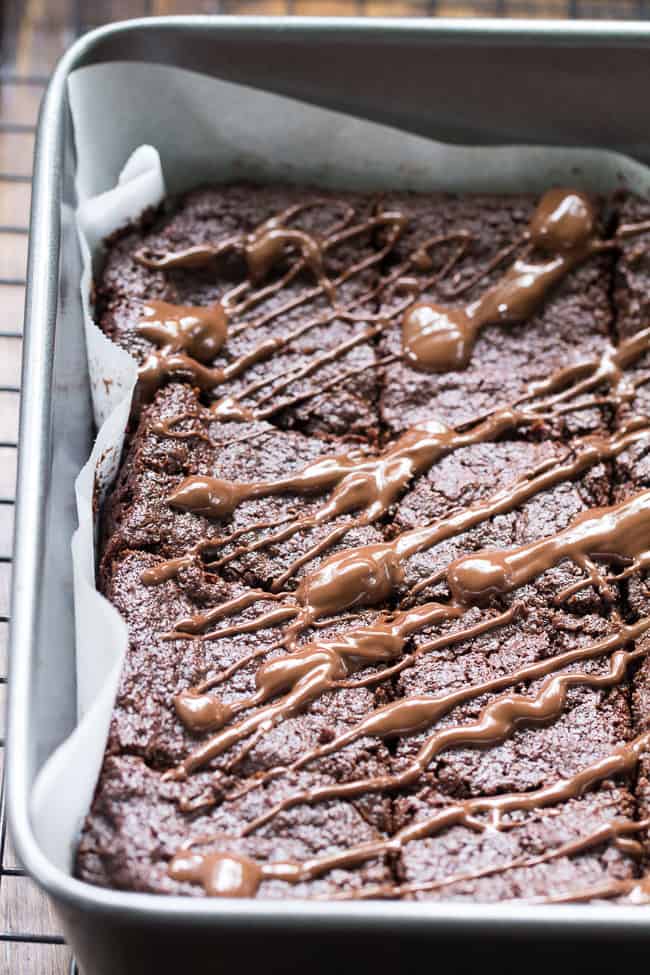 One thing I’ve noticed about all paleo brownies, is that they taste WAY fudgier when they get to set/chill for a good long while in the refrigerator before you dig in.  I believe the coconut oil is responsible for this phenomenon, since it needs to be cooled for quite a while to solidify.

This can be a torturous wait, but try to put them out of your mind and let them chill for several hours, then have them return back to room temp for an hour or so.  FUDGY BROWNIE HEAVEN!  That said, they’re pretty darn tasty no matter when you dig in – I typically eat one (or a blob, spoonful, etc) right out of the oven, and then test again once they’re nice and cooled. 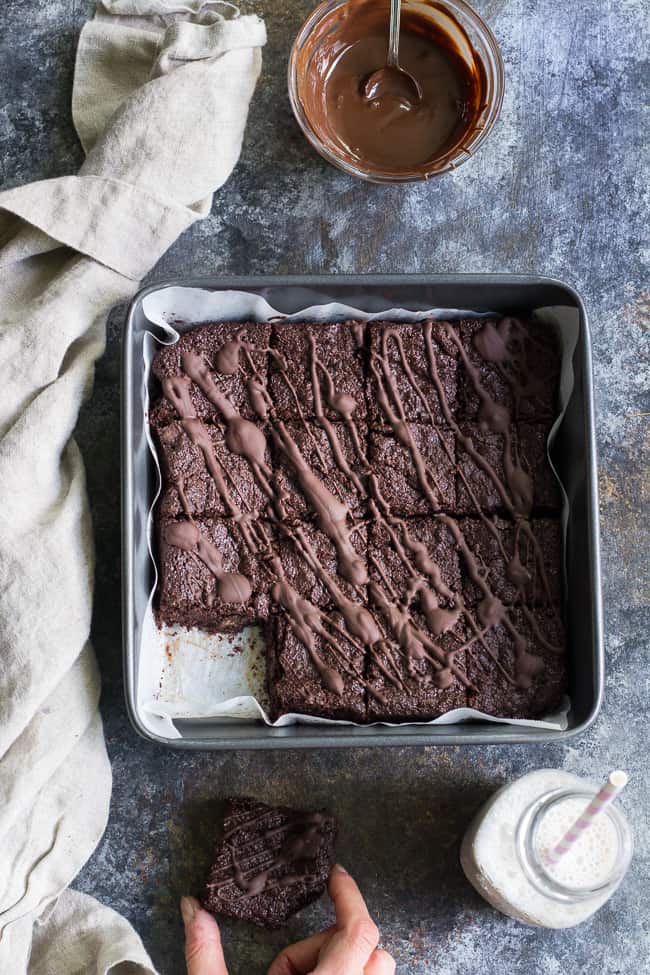 And let me be honest with you right now – my family liked these brownies BETTER than they’re non-vegan, egg containing counterpart.  Truthfully, I liked them better too.  The flax eggs somehow made them chewier and fudgier, and no one here complained about that!

I tend to go wild with my melted chocolate, if only for the photos (and because I like to make a mess and then lick the whole thing up.)  Look, extra chocolate won’t hurt these or anything, but you don’t need to drizzle – they’re super fudgy and chocolatey as-is! 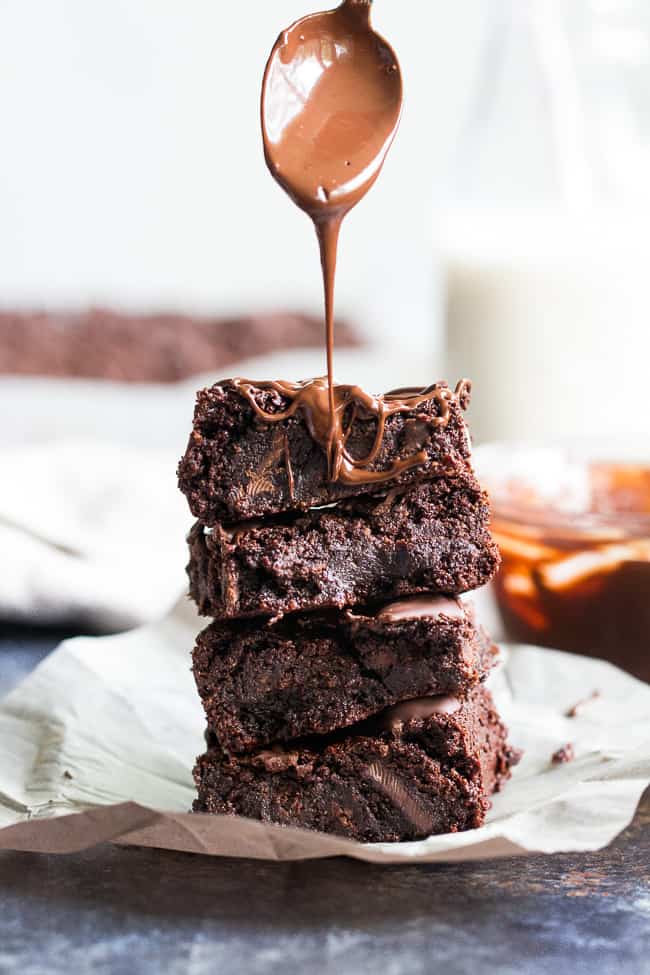 So, you might be wondering how the heck these are “triple” chocolate even without the drizzle.  See now, this is because I legitimately cannot contain myself when it comes to adding different forms of chocolate to chocolate desserts.  So, we start these out with unsweetened baking chocolate mixed with almond butter, we add plenty of raw cacao powder (or cocoa) to the dry ingredients, then, we whip out our dark chocolate chips.  And add them to the batter, of course, if not only after eating several handfuls.

Now, I know many of you are not fans of “paleo” recipes that call for dark chocolate chips that contain cane sugar (like my beloved Enjoy Life morsels.) No worries though, because you can easily make your own 100% paleo dark chocolate chunks with this recipe from Bakerita.  The chunks will give you the “triple” effect while still staying technically paleo and free of refined sugar.  That said, add whatever chocolate you want for your personal triple effect.  I will not tell 🙂 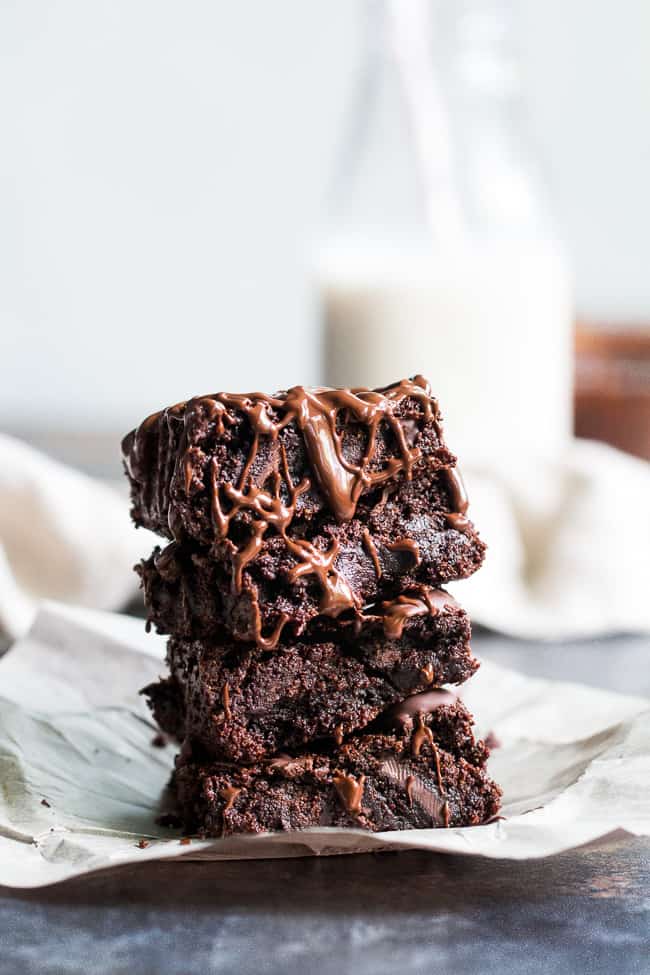 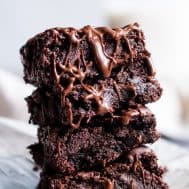 Print this Recipe
Did you make this recipe?
Leave a review
4.63 from 70 votes

* If you wish to make a paleo version with eggs, use 1 egg plus one egg-yolk at room temp and follow the same directions
**Time needed to cool is not included in "prep time"

What I Used to Make My Fudgy Triple Chocolate Paleo & Vegan Brownies:

Are brownies best alone, frosted or topped with ice cream?