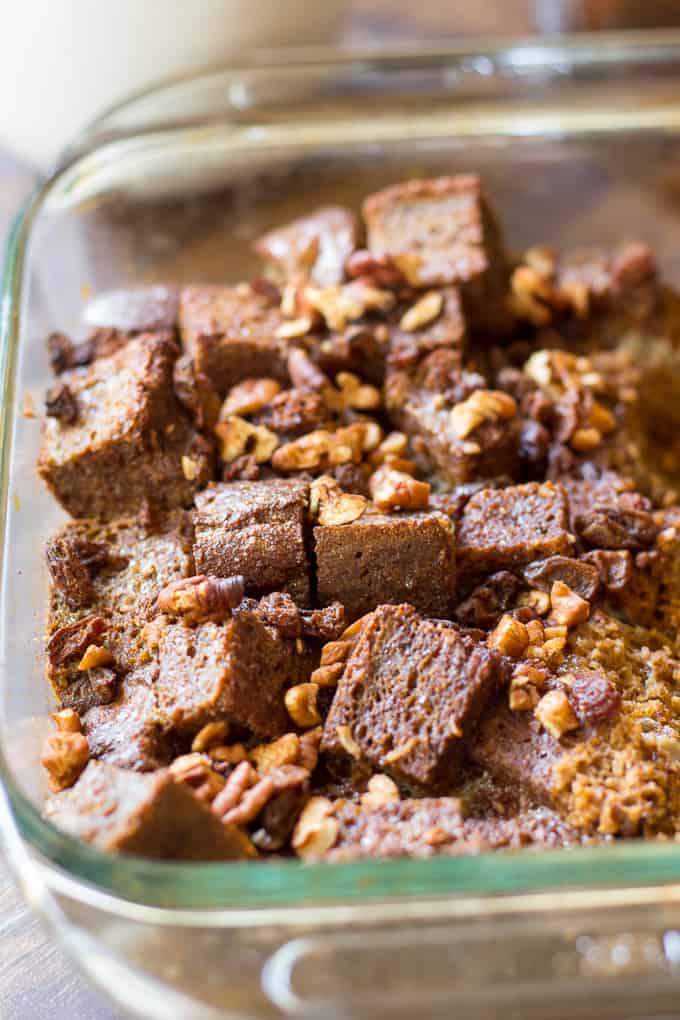 Now that school is in full swing (yes, I’m still adjusting, but, getting there!) Saturday mornings have an extra special feeling.  Especially because it’s almost fall!  I’m a firm believer that at least ONE weekend morning needs an “all out” breakfast.

By “all out”, I’m talking pancakes or french toast, bacon, eggs, and everyone sitting together eating, still in PJs.  Sounds nice, right?  Coffee too.  Unlimited coffee for the cook! 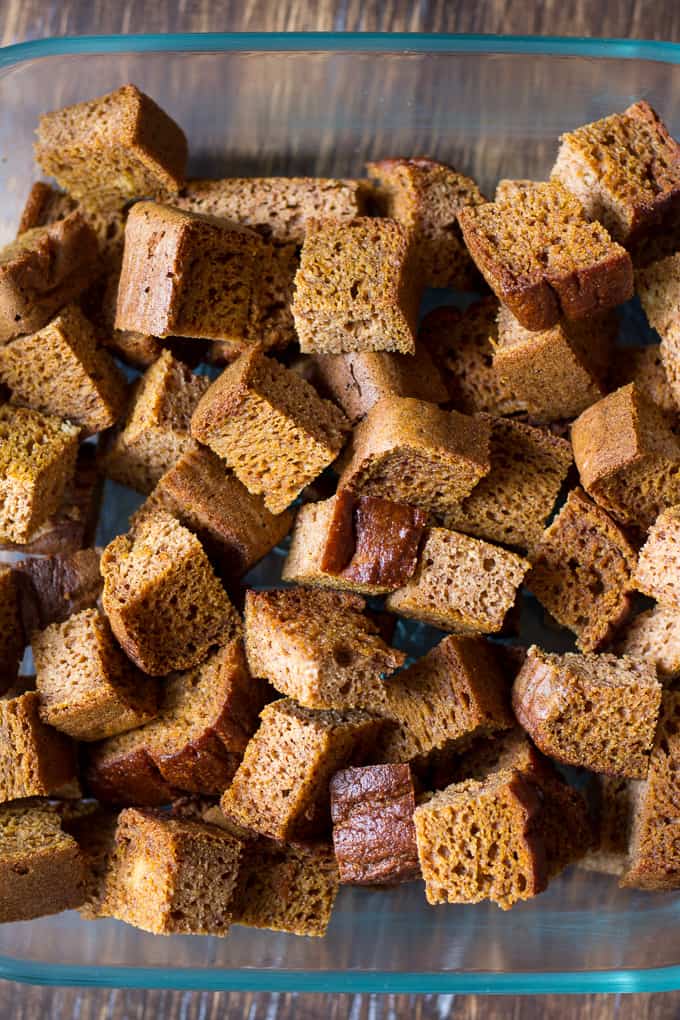 Of course, since I’m the one doing the cooking, it’s not exactly the relaxing scene you’re probably picturing, but still – if it makes the kids happy, it makes me happy.

French toast happens to be one of their favorites, and, up until now I never made it Paleo.  I’d take store bought gluten free bread and make classic french toast in a pan.  Which is really yummy, of course, but after I made my Paleo Pumpkin Bread (shown above, cubed) I knew some sort of french toast was the next step.  Perfect fall Saturday mornings – we’re getting closer!

Tip: If you want a less-sweet breakfast, you can reduce the amount of maple syrup baked into the french toast and it will still turn out beautifully.

I also made a delicious raisin pecan topping for this easy pumpkin french toast that is a perfect compliment to its flavors. The topping is completely optional in this French toast recipe, but if you want to make it here’s what you’ll need.: 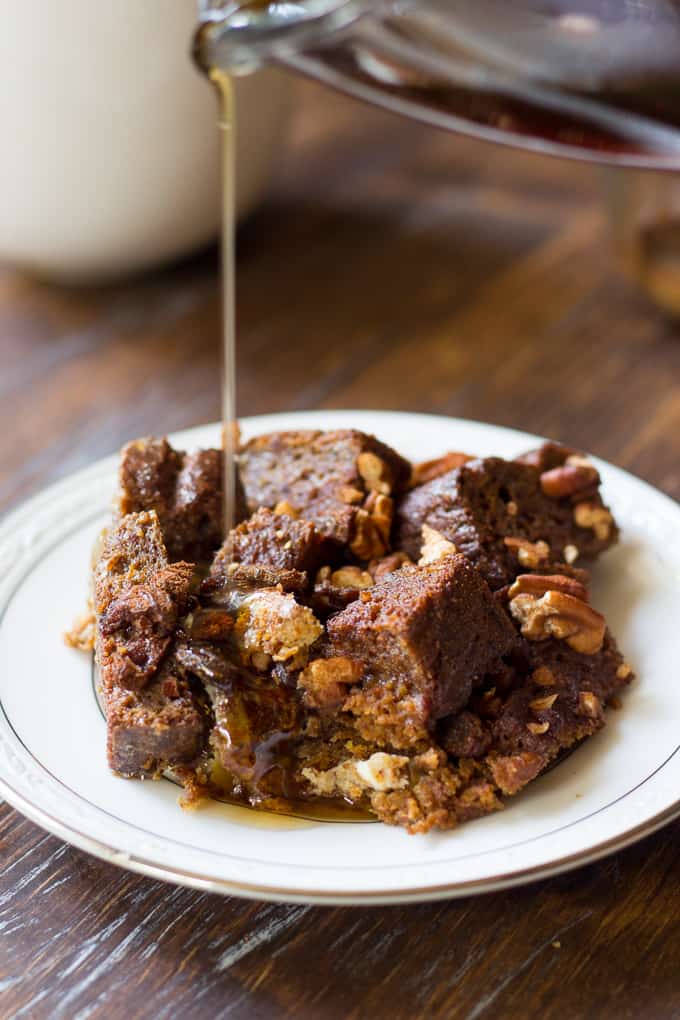 The reason this pumpkin french toast is easy peasy is that it does not require me to stand in front of the stove – YES!

Honestly, I love to make French toast – my Banana Bread French Toast recipe is out of this world! But I’ve decided that I do way too much cooking on my stove top and need to experiment with my oven more.

So, I cubed the pumpkin bread, oven-toasted it (you can totally do this the day before) drenched it in a sweet french toast “bath” loaded with fall spices and baked it.  The results were even better than I imagined! 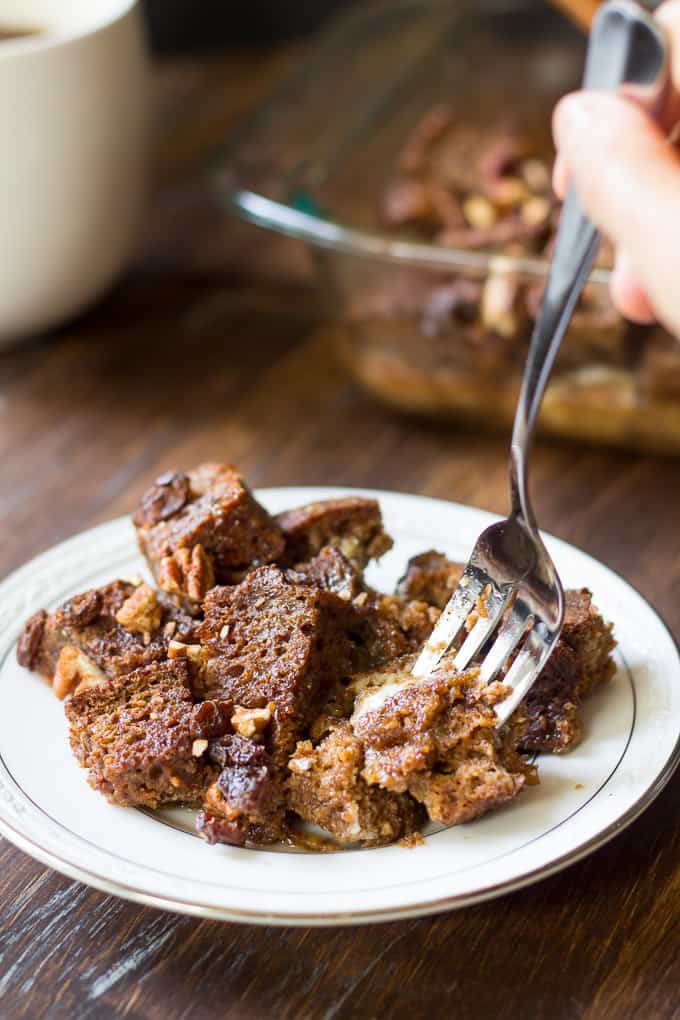 Can I make Paleo French Toast casserole in advance?

Here’s the short answer: Yes and no!

As I mentioned, it’s best to bake the bread, cube it and toast it the day before to avoid a crazy morning rush with lots of hungry people whining.  You can also make the liquid mixture and pecan topping the day before as well and store them separately in the refrigerator overnight.

However, I would not coat the bread the night before as you would with a traditional baked French toast recipe – since it’s made with grain free pumpkin bread, the overnight soaking would be too much for the bread to withstand. 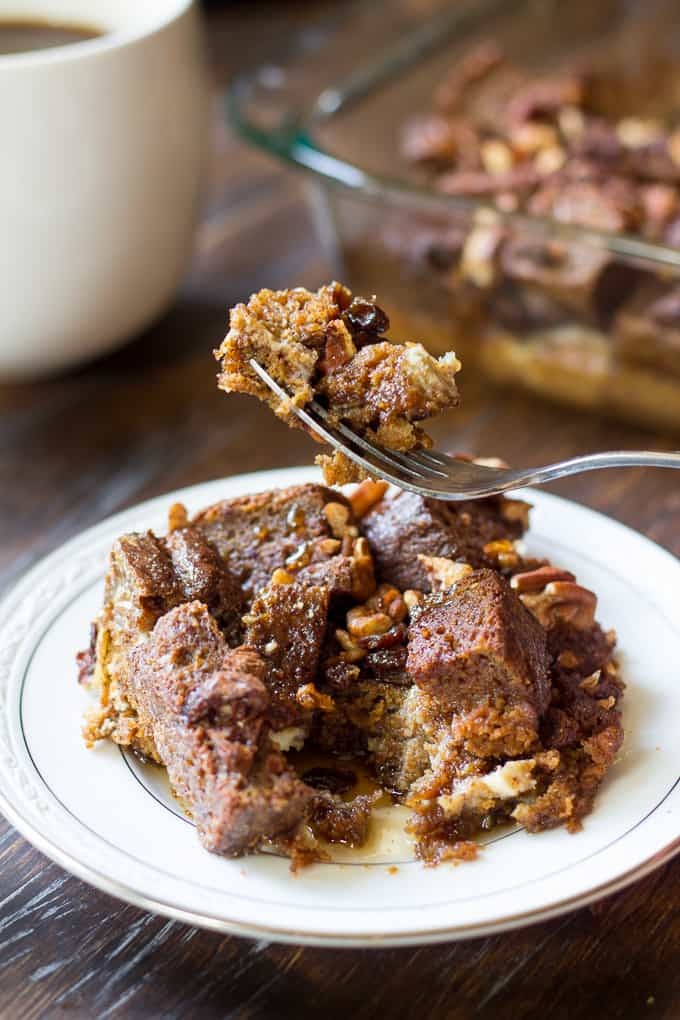 With everything ready to go the night before, first thing in the morning you can simply pour, sprinkle and bake!  I admittedly don’t always make things easy for myself, but, I want to make this recipe (and all recipes, really) easy for you.

I highly recommend you add the chopped pecan/raisin topping, since even my kids had no complaints about it at all!

Not surprisingly, a little drizzle of pure maple syrup is the key to get my kids to eat anything – ever. 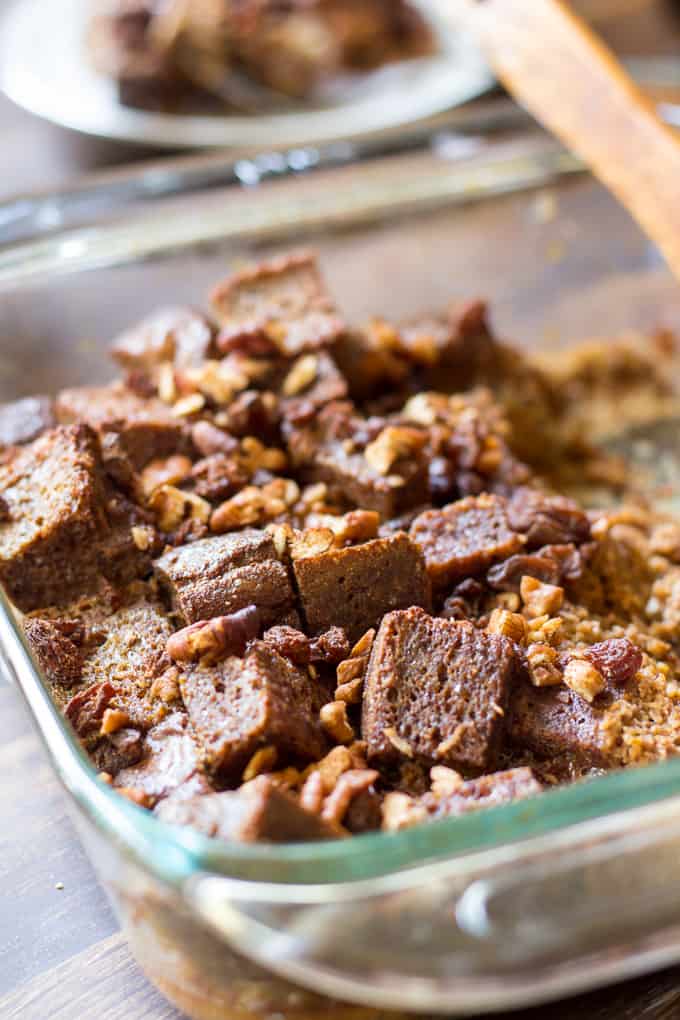 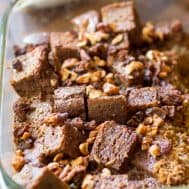 *This step can be done the day before if desired. Simply store the bread cubes covered in the refrigerator.
**You can gently toss the bread in the egg mixture to make sure it's completely coated.
***Prep and cook time does not include the time is takes to make the loaf of pumpkin bread.

Want more Paleo breakfasts for your sweet tooth?  Try one of these!

Are you excited for cozy fall weekend mornings?