These gooey sweet paleo pumpkin cinnamon rolls begin with an easy one-bowl dough, are filled with a maple pumpkin spice mixture and topped with a “cream cheese” icing! They’re soft and chewy on the inside with a chewy crust on the outside, making the texture just as irresistible as the flavor!  Family approved, perfect as a special breakfast treat or snack anytime! 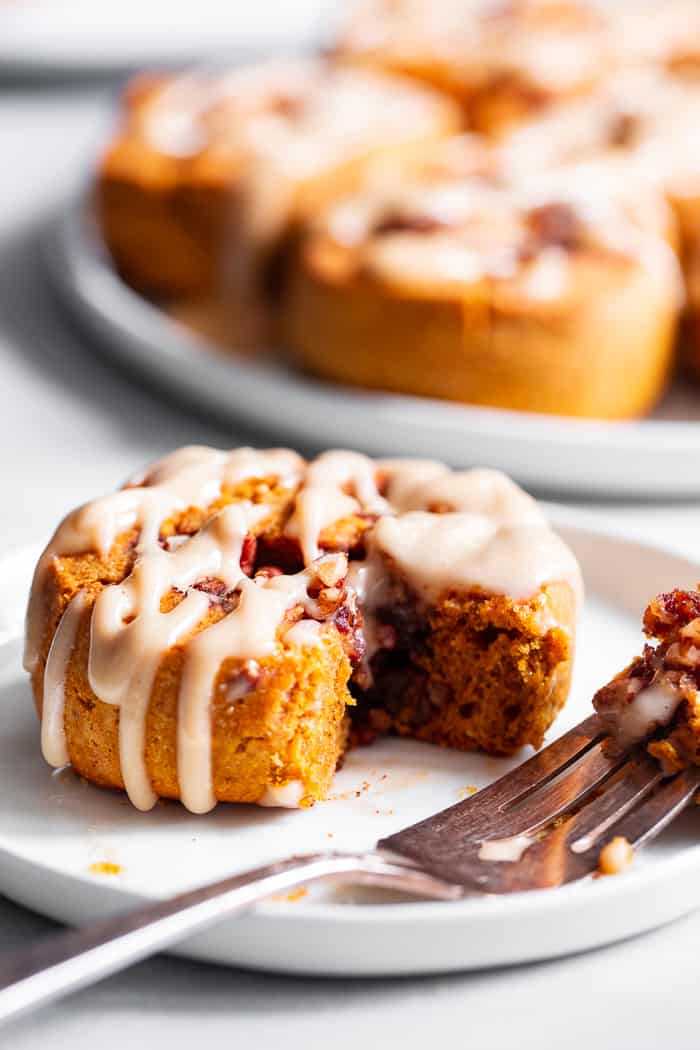 With pumpkin season going strong, I couldn’t help but create a pumpkin version of my favorite paleo cinnamon rolls!

So here they are!  Chewy and soft on the inside just like my original version, with the added bonus of loads of pumpkin spice and a dairy-free “cream cheese” icing made with cashews.

These were tough to resist guys!  Luckily the rest of my crew thought so too, so they didn’t last long at all.

Maybe the best part is how simple these Pumpkin Cinnamon Rolls are to put together!  We have a one-bowl dough, and they’re yeast-free so no need to wait for them to rise as you do with traditional rolls. 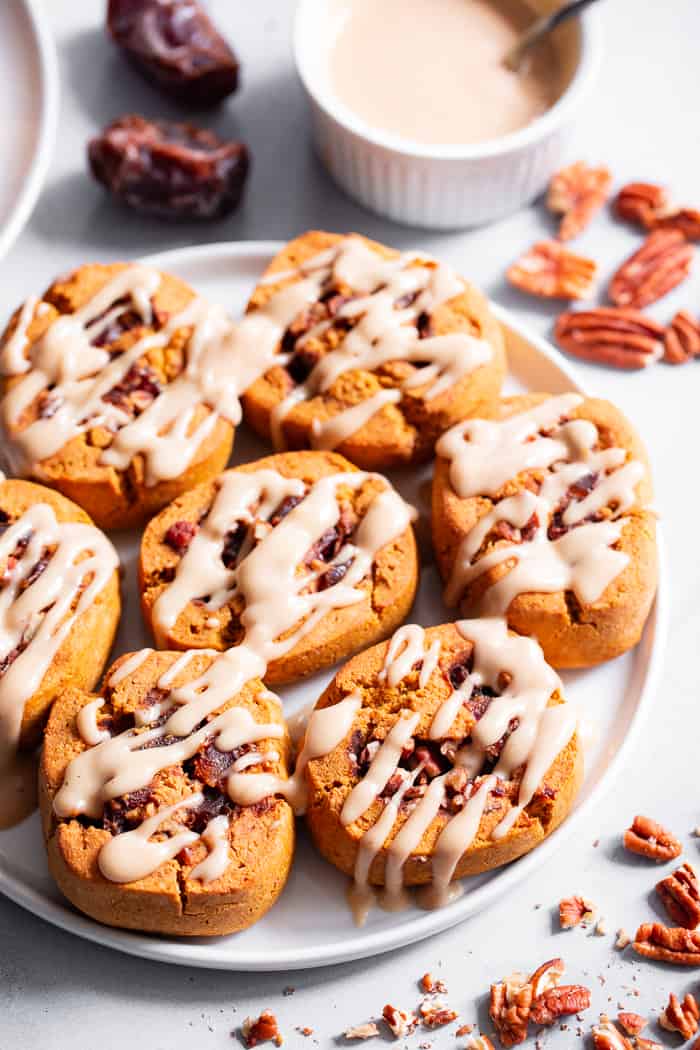 The dough uses a mixture of three grain free flours – blanched almond, coconut and tapioca.  I find I get the best texture when I use all three with this recipe.  The rest of the dry ingredients include baking soda and baking powder (see my recipe note for paleo friendly baking powder!) pumpkin pie spice, and sea salt.

The filling includes more pure maple syrup, chopped dates or raisins, cinnamon, pumpkin pie spice, and chopped pecans.  You can leave out the pecans, but I love this touch for extra crunch! 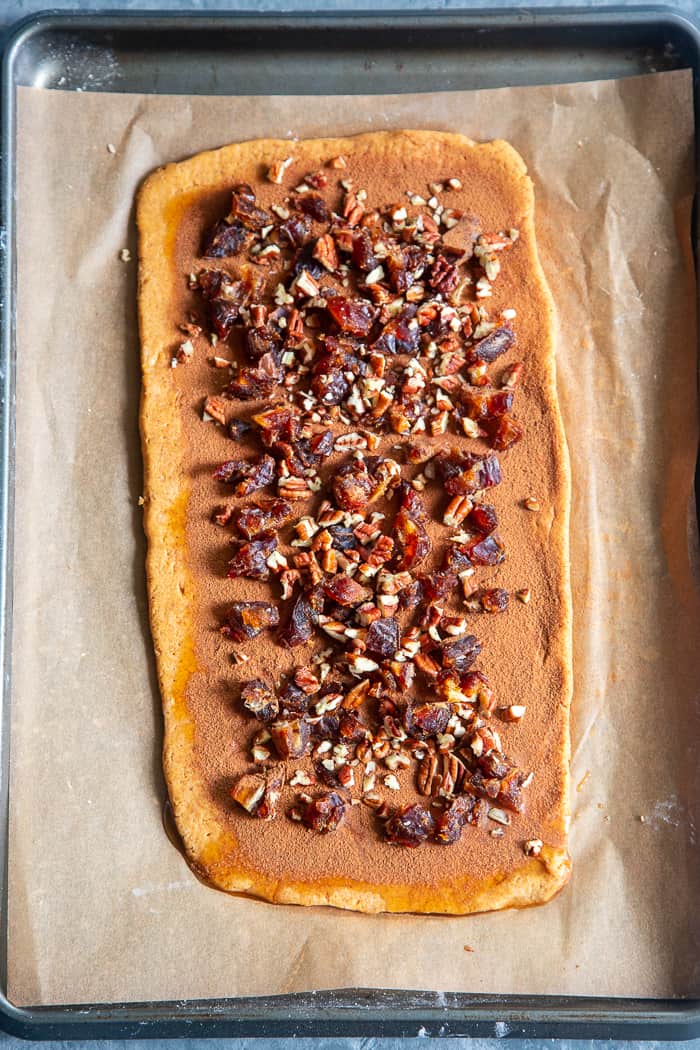 Tips For Rolling out Dough:

Since the dough can feel sticky, you may need to chill it while putting together the cinnamon rolls.  For this, I recommend using either a baking sheet or cutting board that you can easily transport to the fridge or freezer to firm up the dough easily.

It also helps to sprinkle the dough and the parchment paper with tapioca flour before pressing or rolling it out.  Tapioca won’t affect the texture of the dough the way almond or coconut would, and it helps your dough from getting too sticky. 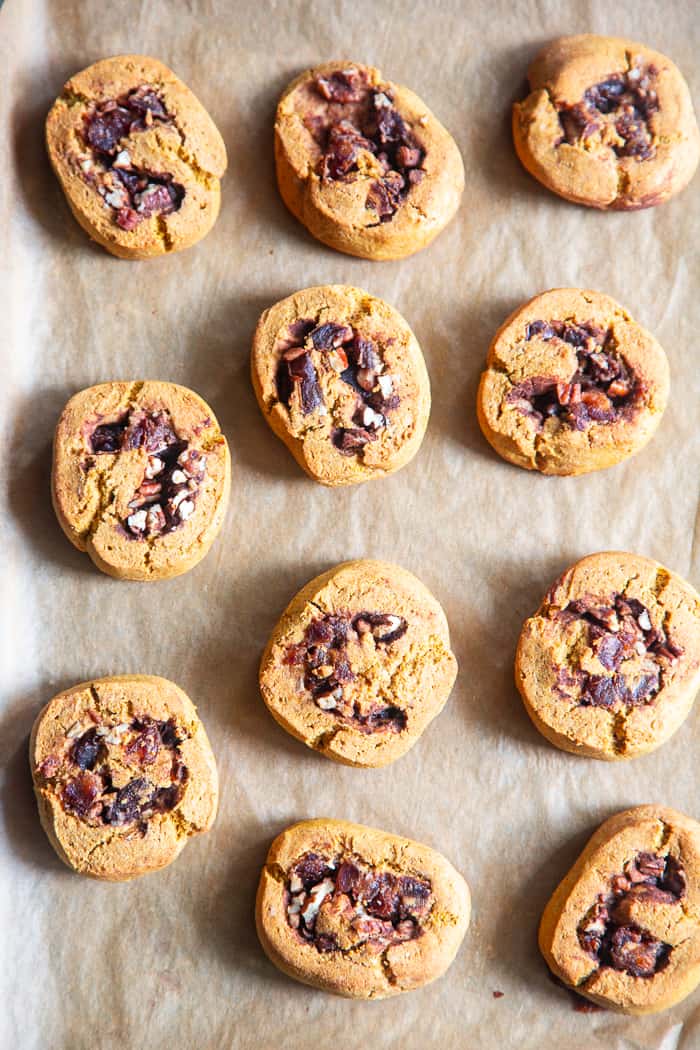 Tips for Rolling Up Cinnamon Rolls:

I use the parchment paper to help get the dough rolled up into a tight log.  Without actually rolling it up with the dough, simply use it to guide you so you don’t handle the dough too much, getting it stickier.

Once it’s in a nice tight roll, make sure you chill it before cutting it into pieces – this make for neater slices and easier baking. 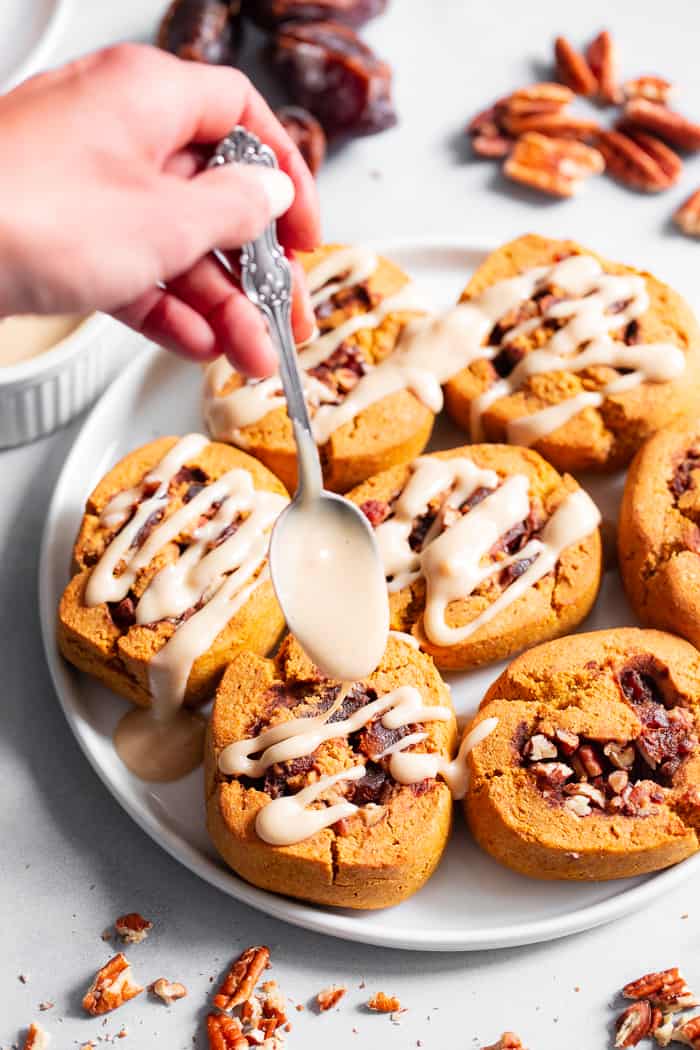 What’s in the “Cream Cheese” Icing?

I use a NutriBullet to whip it up until it’s nice and creamy and perfect for drizzling!  You can drizzle the icing over the warm/partially cooled cinnamon rolls.  Since they’re best served warm, you don’t have to wait for them to cool to drizzle the icing on and dig in! 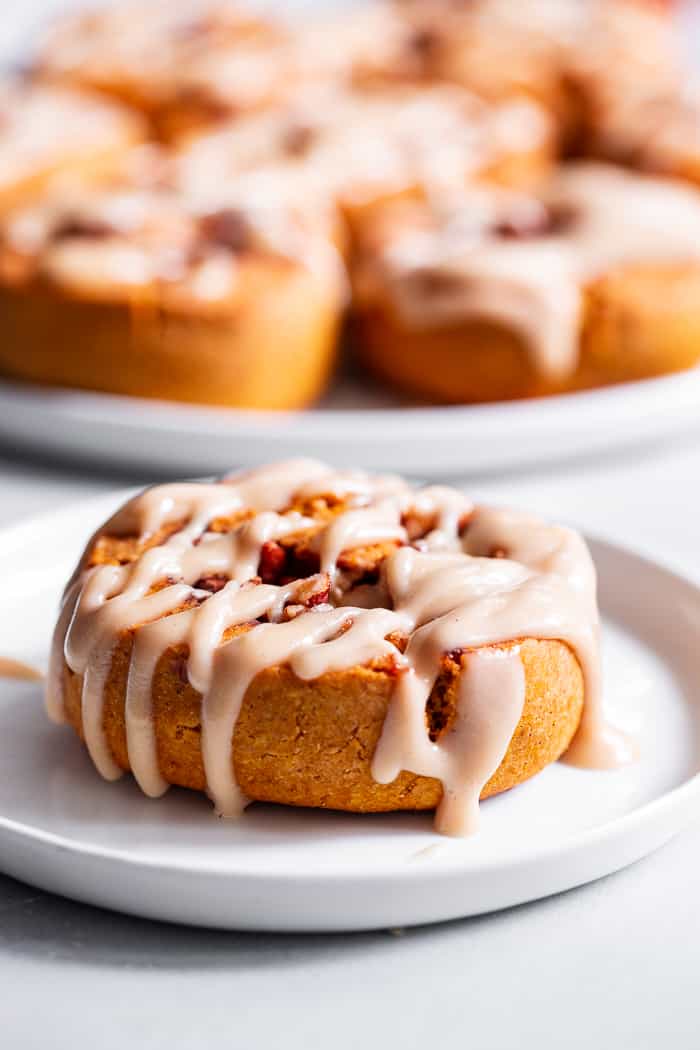 Can I Make These Pumpkin Cinnamon Rolls Ahead of Time?

While I do not recommend baking these too far in advance of serving them, you can definitely refrigerate the unbaked pumpkin cinnamon rolls for 24 hours before baking them.

You can work right up to step 8 or 10 in the recipe (either chilling the log, or after cutting) and chill, covered, at that point.  No need to wait before baking them either – they can go straight from the refrigerator to the oven once you’re ready to serve them.

You can also make the icing up to two days in advance – store it in the refrigerator, and make sure to bring it back to room temperature before icing the cinnamon rolls.

I hope you’re READY for some incredibly delicious Paleo Pumpkin Cinnamon Rolls!  Grab what you need and get excited – let’s do this! 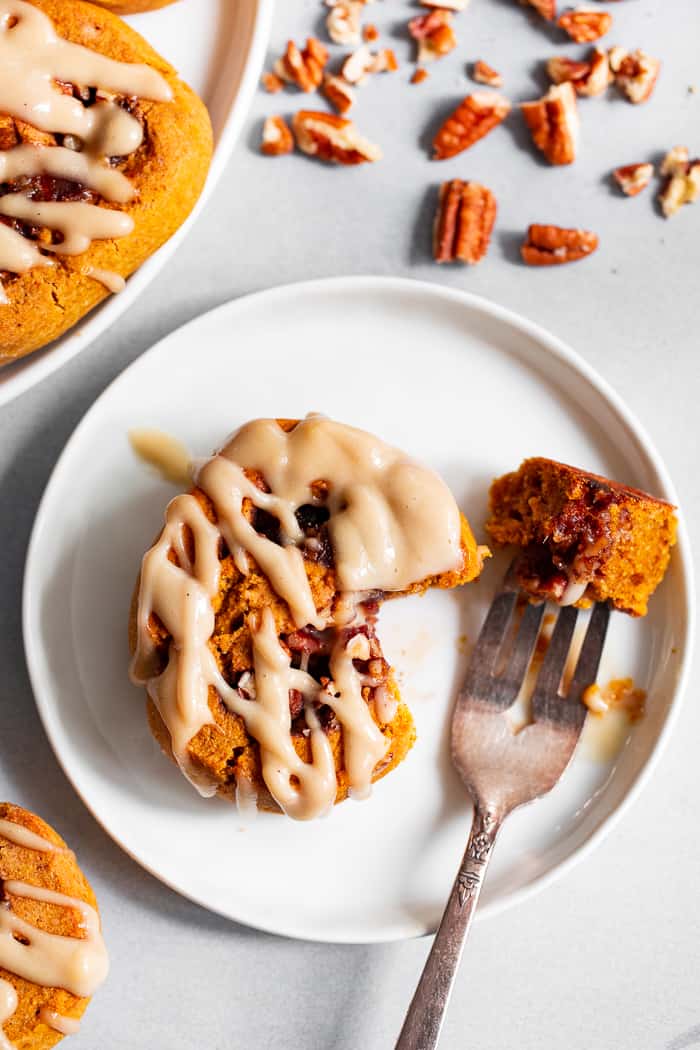 These gooey sweet paleo pumpkin cinnamon rolls begin with an easy one-bowl dough, are filled with a maple pumpkin spice and date mixture and topped with a “cream cheese” icing! They’re soft and chewy on the inside with a chewy crust on the outside, making the texture just as irresistible as the flavor!  Family approved, perfect as a special breakfast treat or snack anytime! 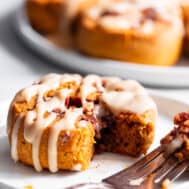 Print this Recipe
Did you make this recipe?
Leave a review
4.48 from 19 votes

For the Cream Cheese Icing:

For the Cinnamon Rolls:

*to make your own paleo friendly baking powder, simply mix 1 tsp of baking soda with 2 tsp cream of tartar.  Use just 1 tsp of the mixture for this recipe.

Want More Paleo Breakfast Goodies?  Try One of These!