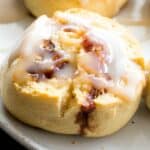 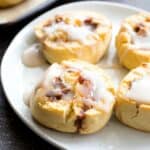 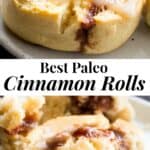 These classic Paleo cinnamon rolls are soft and chewy with an irresistible texture and flavor! They’re family approved and perfect as a special breakfast treat or snack! 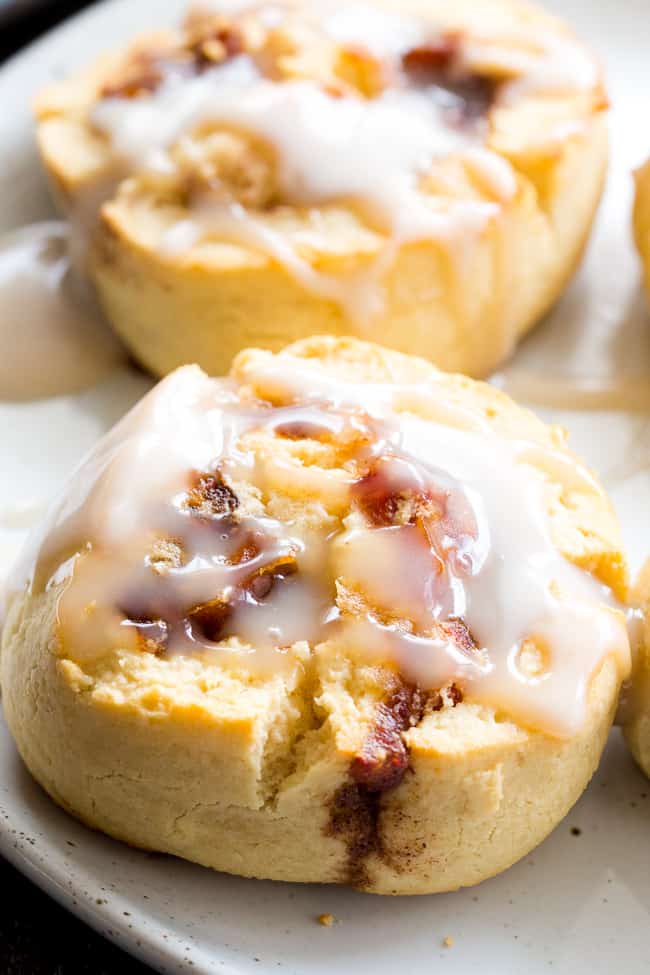 I’d been dreaming about cinnamon rolls ever since making my garlic herb Paleo dinner rolls.  These Paleo cinnamon rolls are filled with sweet gooey maple cinnamon and raisins, then rolled cinnamon-bun style.

Paleo baking is a bit of a science and it can be a challenge to achieve a texture similar to non-Paleo baking treats. This is especially true when trying to recreate a stretchy dough like cinnamon roll dough.

The not-so-secret secret ingredient for getting that dough stretch factor in this Paleo cinnamon roll recipe is tapioca flour.

It is indeed! Tapioca flour won’t damage the digestive tract and it’s also low-risk for allergies, which makes it a super friendly option for people with special dietary needs.

Tapioca itself is not a 1:1 substitute for grain flours, however. On the other hand, tapioca flour is a fantastic addition to gluten-free flours like almond flour and coconut flour. Its powdery consistency is just the right ingredient for tying together the crumbly bits of Paleo baking flours.

I rely on tapioca flour in many of my recipes to mimic the “chew” that gluten typically provide in traditional baking recipes.  I used quite a bit of it in my pizza crust and dinner rolls, but for this recipe I knew I’d need even more.

I settled on 1/2 cup more tapioca flour than my dinner roll recipes calls for, and with maple syrup added to sweeten, the liquid/dry ingredients balanced well. 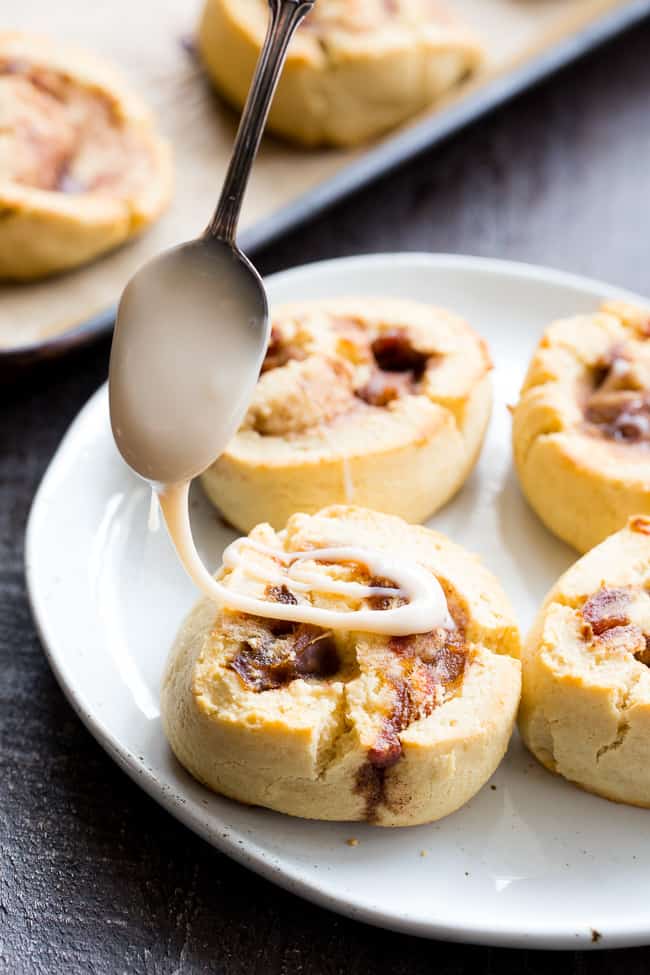 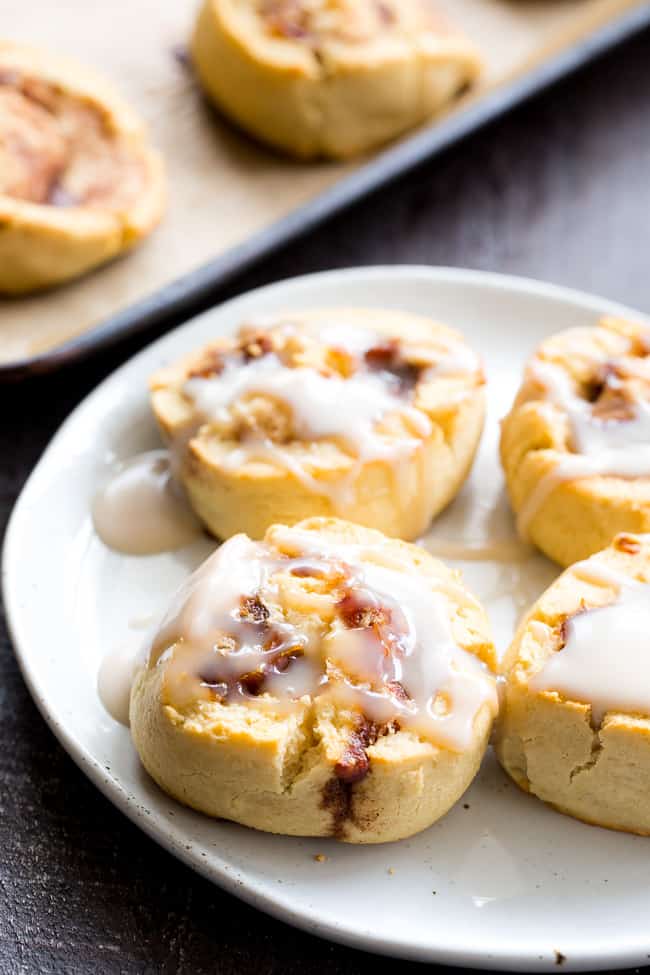 How to Roll Out Cinnamon Roll Dough

This recipe might take just a bit of practice before knowing when the dough is the right consistency to press out, roll, and cut.  I provide detailed instructions within the recipe itself regarding when and how long to chill before each step, to make it easier to get it right the first time!

Below, you’ll see the “stages” of the dough.  The top left photo is the dough after mixing and before chilling and the top right shows it after chilling for 15 minutes in the fridge.

From there, I place the dough in a ball on parchment paper sprinkled with more tapioca flour. The tapioca is necessary to keep the dough from sticking when it’s time to roll!   I then used the heels of my hands to gently press the dough into a rectangle, as shown in the middle right photo. 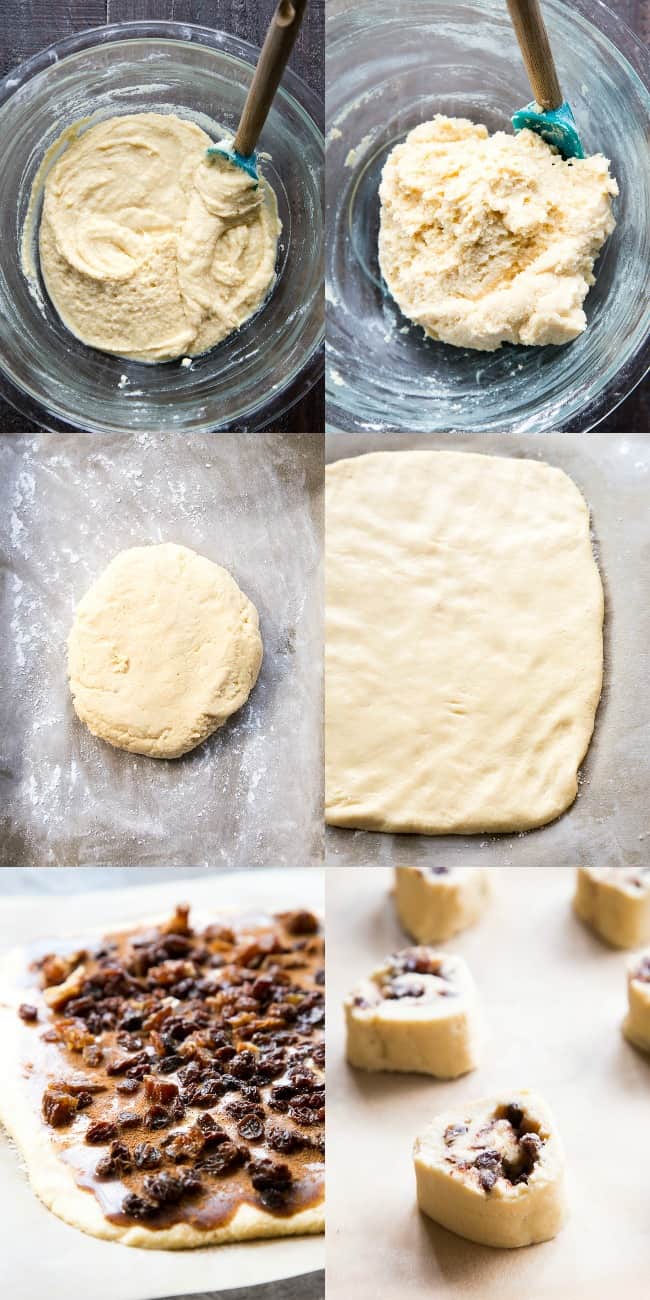 I made a couple of batches of these cinnamon rolls with dates, one with raisins and one with both.  I honestly think this part is preference – the dates make it “gooier” and the raisins are great if you NEED raisins with your cinnamon!

The last photo above is the filled dough, after I chilled it in the freezer (again, all described below!) and cut into segments.

You can gently use your hands to shape them nice and round before baking. I  recommend baking them on a parchment lined baking sheet about 2 inches apart from each other. 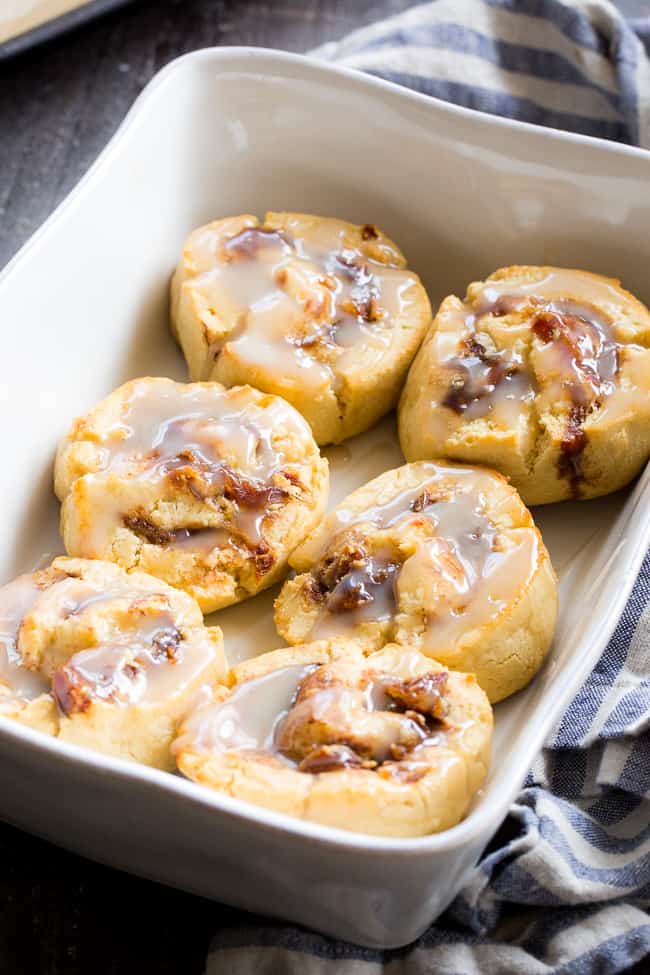 How to Make Cinnamon Roll Icing

I created a sort of sweetened condensed coconut cream for these Paleo cinnamon rolls by boiling coconut cream with maple syrup until it reduced and thickened just a bit.

If you continued to cook it this way – you’d get caramel, which wouldn’t be at all bad, but if you want that white-glaze-y look (while letting the maple flavor shine through), don’t let the mixture caramelize!

The topping can be made ahead of time (what I did) and stored in the refrigerator until ready to use – up to about 4 days.

Can I freeze cinnamon rolls?

Yes! This is what I’ve been doing with my leftover Paleo cinnamon rolls! Any leftovers can be frozen (while still fresh) and reheated. Frozen cinnamon rolls will last in the freezer for up to 3 months!

To freeze leftovers, there are a couple different methods:

How to Reheat Cinnamon Rolls

I hope you guys are ready for a HUGE treat!  Let’s dough-make, roll, and bake! 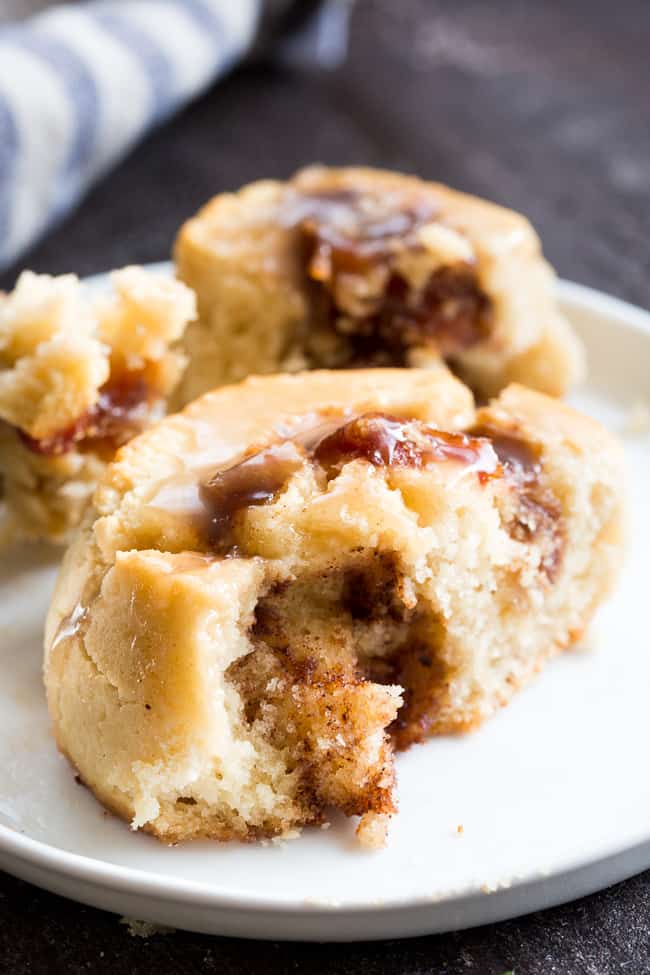 These classic paleo cinnamon rolls begin with a one-bowl dough, have a maple cinnamon filling and dairy-free, sweet and gooey white glaze drizzled on top!  They're soft and chewy on the inside with a chewy crust on the outside, making the texture just as irresistible as the flavor!  Family approved, perfect as a special breakfast treat or snack anytime!
Author: Michele Rosen
Prep Time: 50 minutes
Cook Time: 20 minutes
Total Time: 1 hour 10 minutes
Course: Breakfast/Dessert
Cuisine: Paleo
Servings: 8 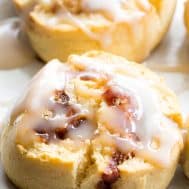 Print this Recipe
Did you make this recipe?
Leave a review
4.47 from 248 votes

For the Cinnamon Rolls:

*Topping can be made before beginning, or ahead of time, and stored in the refrigerator until ready to use.

Want More Paleo Baking Recipes?  Try One of These!