These grain free and paleo cinnamon roll pancakes have a gooey cinnamon swirl and maple glaze for the best of all things cinnamon roll without the work!   Family approved, gluten-free, with a dairy-free option. 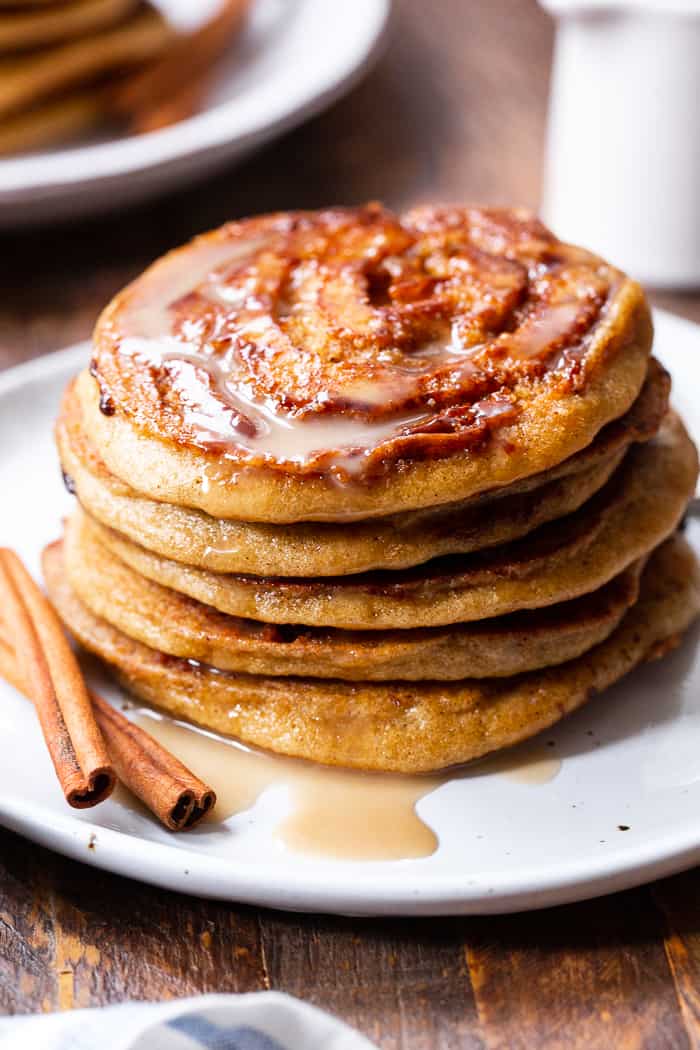 If you’re just not feeling all the effort involved in making actual cinnamon rolls, just know I can completely relate.

Understand that I LOVE my cinnamon rolls of course, but, they require top notch patience and energy that honestly I just don’t have lately!  Between our kitchen renovation, the holidays, and just general trying-to-keep-up-with-life, I’m much more likely to make pancakes for a special breakfast.

The obvious solution is (DUH!) to just make cinnamon roll pancakes.  A fraction of the time and energy and WOW are they yummy! 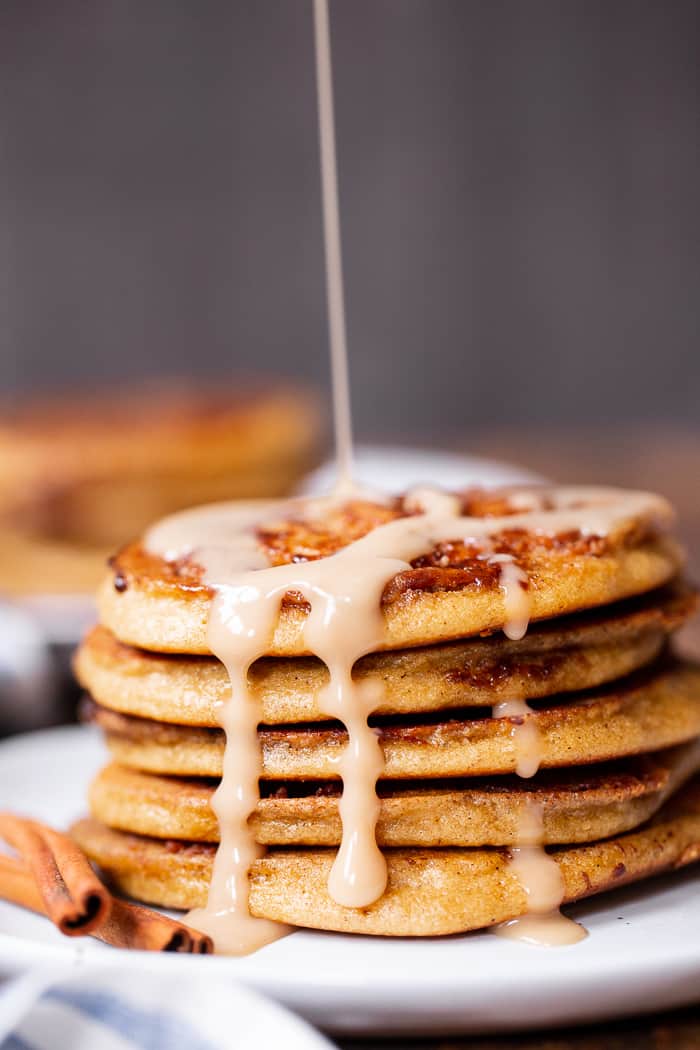 Let’s get right to the deets!  I decided to go with an almond flour based pancake simply based on what I currently have in my pantry.

The basic recipe for the batter is somewhat similar to my lemon blueberry pancakes, which are a favorite of mine.   If you’re more of a coconut flour pancake person, you can use the recipe for buttermilk pancakes for the batter.

Next we have the cinnamon swirl!  I used ghee – which is nice and soft and creamy at room temp, mixed with maple sugar and cinnamon.  Coconut sugar can easily sub in for the maple sugar. 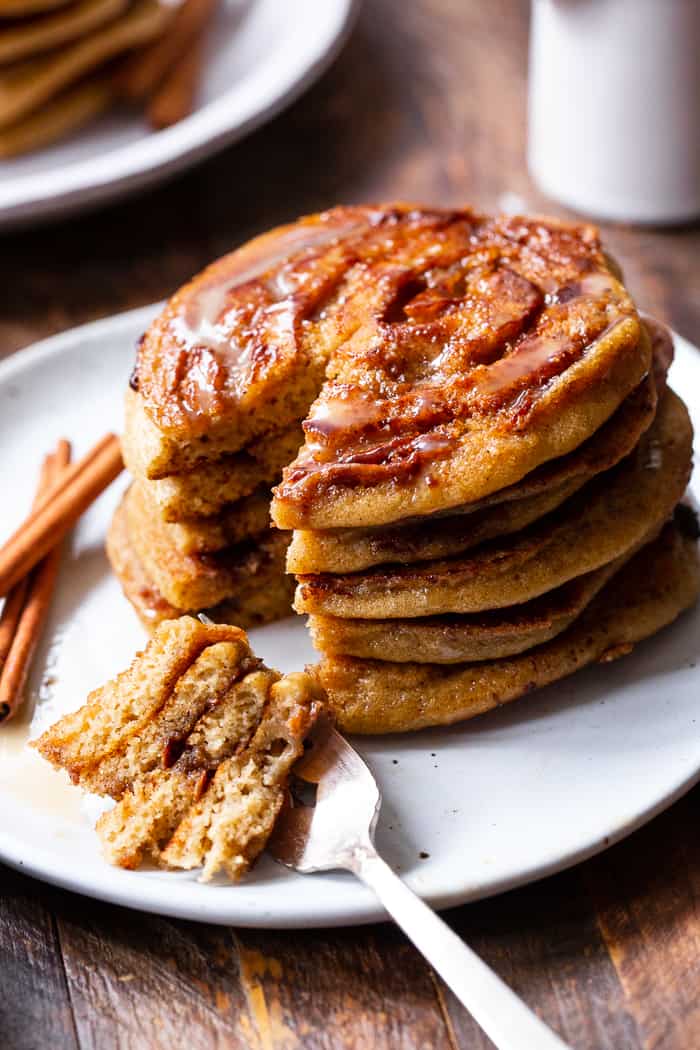 Timing is important when it comes to piping on the cinnamon mixture.   Too soon, and it will melt right into the pancake.

Make sure the pancakes are just about ready to flip before piping on the filling and it will turn out perfectly!

Speaking of flipping the pancakes, make sure you’re using a very-wide spatula and have a reliably non-stick skillet or griddle, since paleo pancakes in general can be a bit trickier to flip.  Okay I’ll be honest – I’m pretty bad at flipping pancakes of ANY kind, so I need all the help I can get 🙂 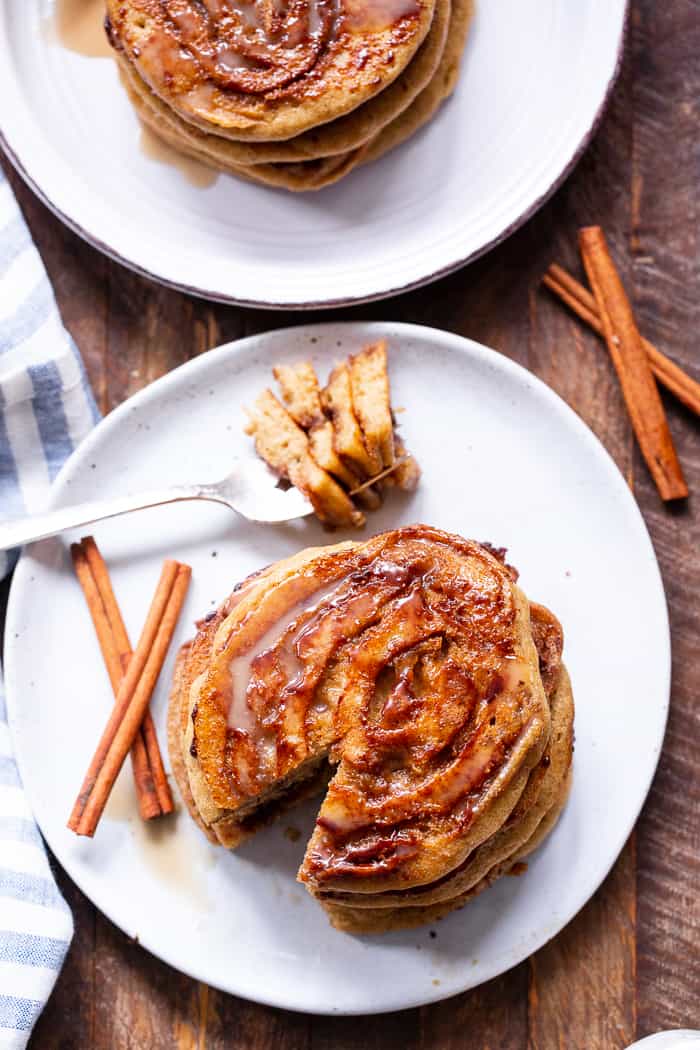 The final touch is the maple glaze!  I actually used the same recipe that I did for my cinnamon roll recipe.

It’s a mix of maple syrup, coconut cream, and vanilla that’s cooked to the consistency of sweetened condensed milk.  I recommend making the glaze first since it needs to cool for awhile before using.

All in all, making cinnamon roll pancakes isn’t second best to cinnamon rolls in the least – they’re perfect and special on their own!  Let’s grab our favorite skillet, possibly an apron (they’re just fun) and make these pancakes! 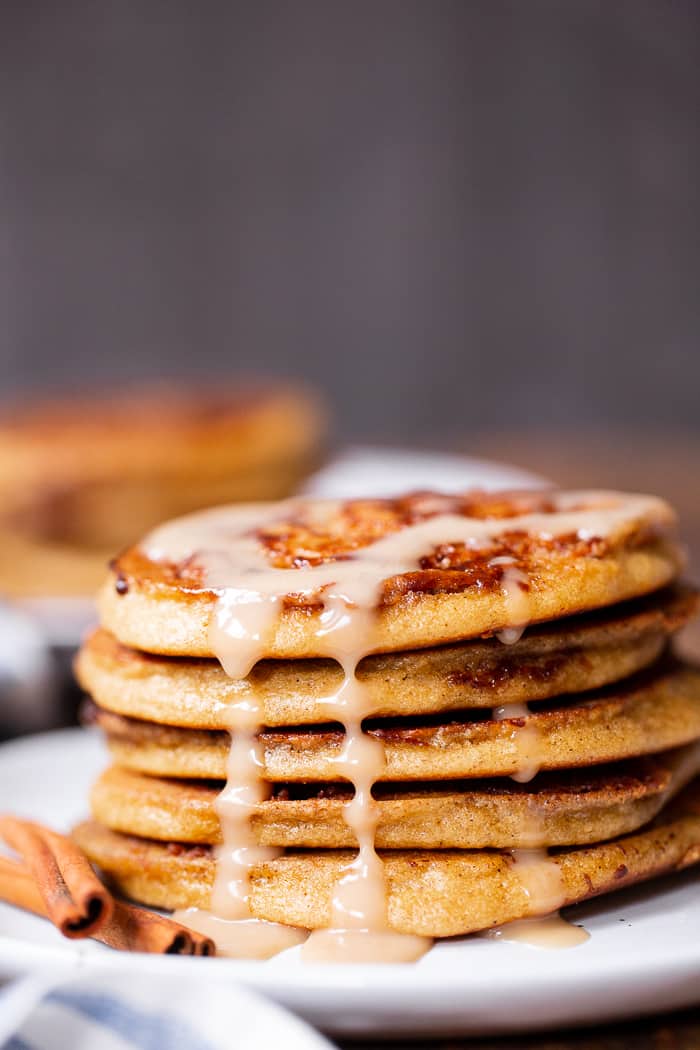 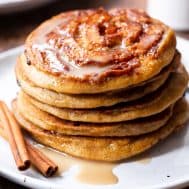 Print this Recipe
Did you make this recipe?
Leave a review
4.48 from 36 votes

Want More Paleo Pancake Recipes?  Try One of These!