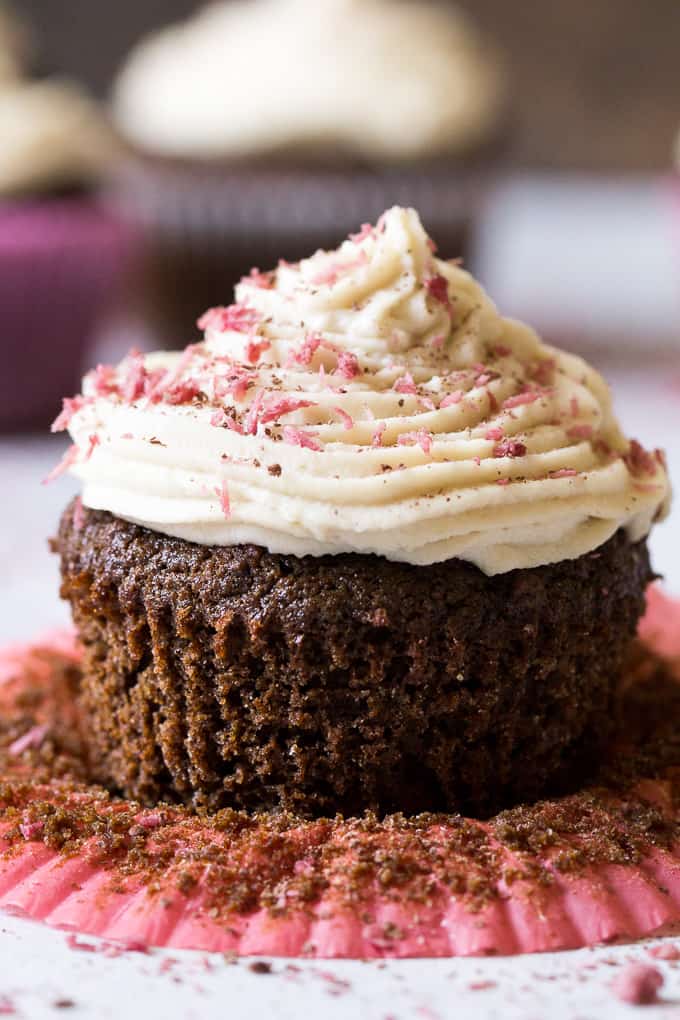 It’s that time of year once again.  Emily’s birthday/Valentine’s Day!  Technically they’re 2 days apart, but since I’ll always remember bringing her home from the hospital in a little red-heart sweater hat on the 14th, it’s all the same in my mind.  That said, I usually try to post something on the blog that’s chocolate + birthday-ish to celebrate both days. 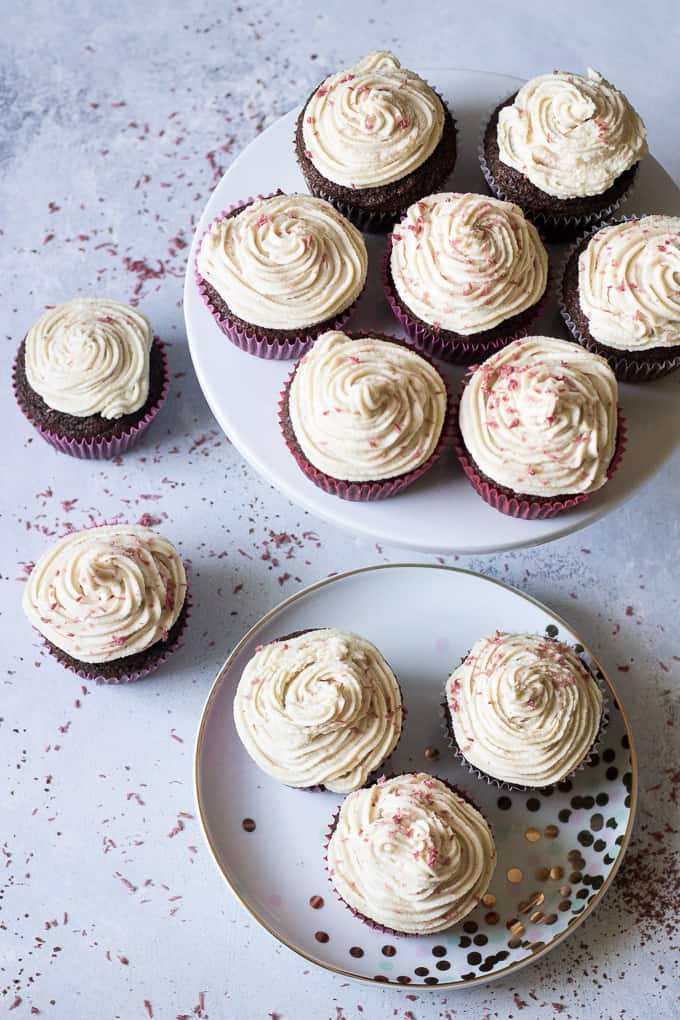 And yes, these Paleo chocolate cupcakes are the follow-up recipe to the very addicting coconut cashew cream cheese frosting recipe from Wednesday!  While the frosting came together effortlessly, the cupcakes didn’t give me that same delight.  Nope, they drove me crazy for 2 days straight, just as many tricky Paleo baking recipes can do.

In truth, I originally wanted these – so badly – to be red velvet cupcakes.   I get obsessed over recipe ideas and I was madly obsessed with making “classic” red velvet cupcakes, Paleo style, with beet powder.   However, although my batter came out a beautiful deep red color, once baked, the cupcakes just looked brown.  I also added too much coconut flour on that first try, which is another issue entirely, but, needless to say the first batch was all wrong all the way. 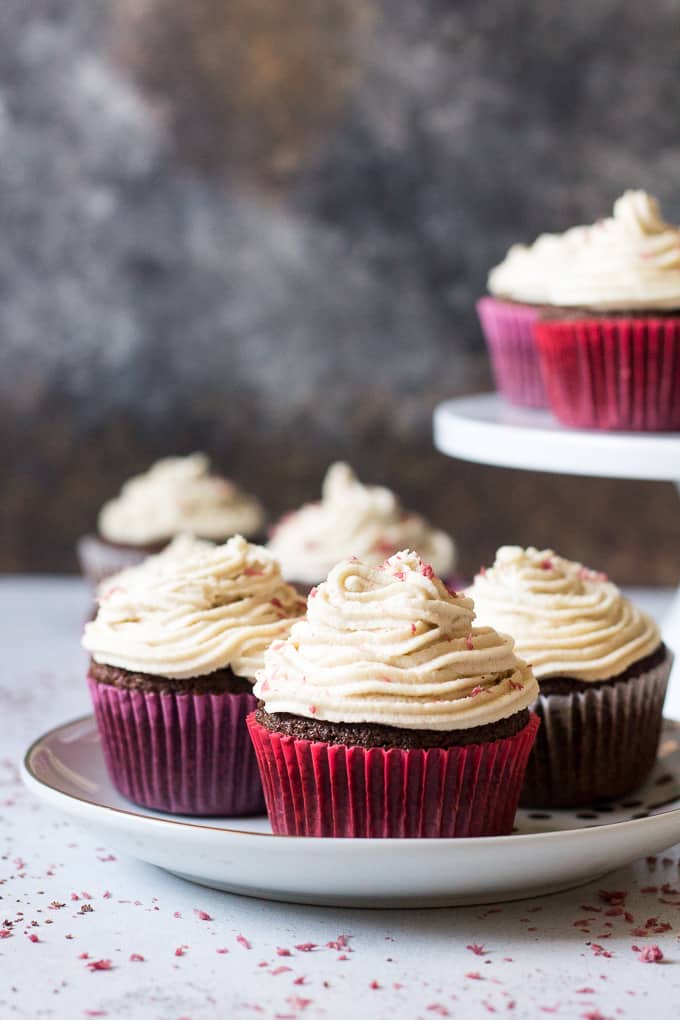 I honestly did not want to put actual roasted beets in the cupcakes, since, I suppose I wasn’t SO hooked on the red velvet idea to go as far as roasting beets and staining half of my kitchen just for reddish colored “red velvet” cupcakes.  I feel that if I’m going to go as far as roasting beets, I need to actually taste the beets and put them in a salad or something, you know?  Not cupcakes.

So, I gave up the red velvet idea and settled for chocolate, and I’m not one bit sorry about it.  I managed to stick with a coconut/tapioca flour combo (no almond flour was another challenge!) and came out with a wonderful texture and flavor that even the pickiest one of my crew liked. 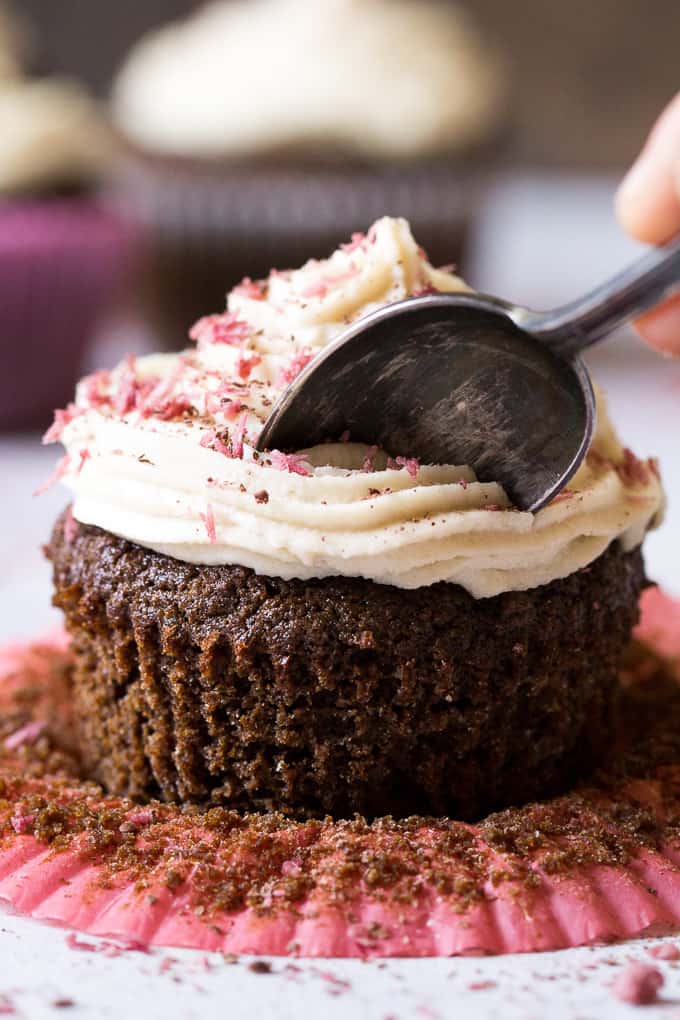 Even though I’d given up on red velvet, I was still thinking of ways to use my remaining beet powder.  I didn’t actually want to color my frosting because I thought it had such a pretty cream color that contrasted the chocolate really well.

I’d recently come across naturally colored “coconut sprinkles” and figured I’d give it a shot with my beet powder and a bit of water.   Nothing to lose!  So glad I tried it out because the color turned out perfectly and the kids had no idea what I’d used to color the sprinkles. 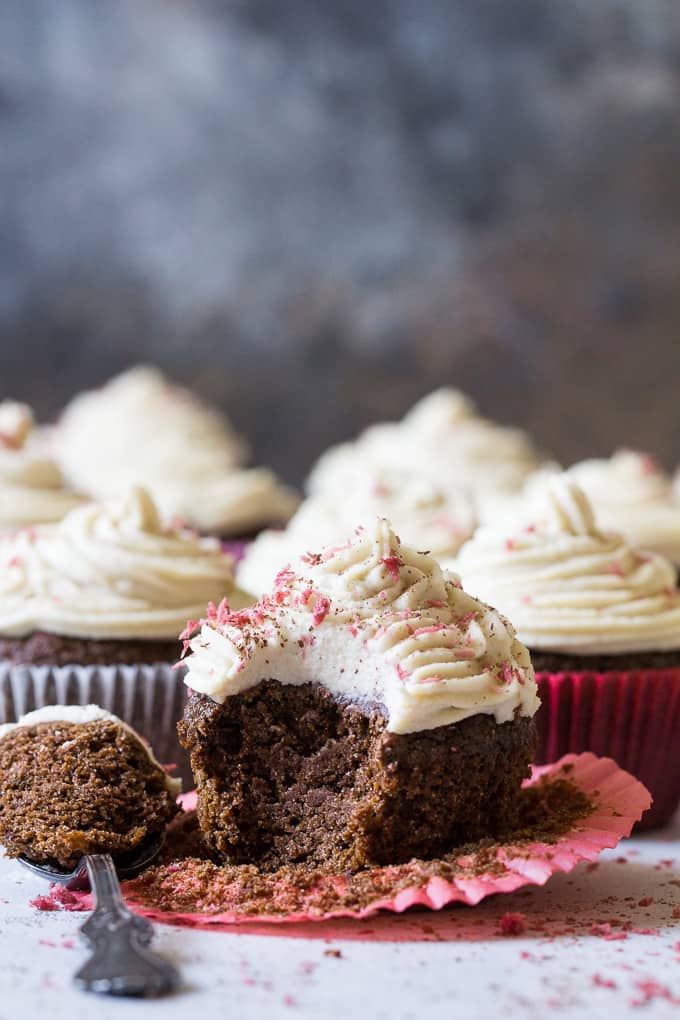 So, at the end of all the recipe drama is a finished product I know you guys will love.  An easy Paleo chocolate cupcake that’s both soft and moist yet sturdy enough for frosting, perfectly sweet and chocolatey at the same time.

If “cream cheese” frosting isn’t your thing, I HIGHLY recommend trying out the chocolate ganache I used on my vanilla cupcakes cast year.  You can also frost them with a coconut whip cream frosting if you like light and fluffy.   Ready to bake?  Let’s get started! 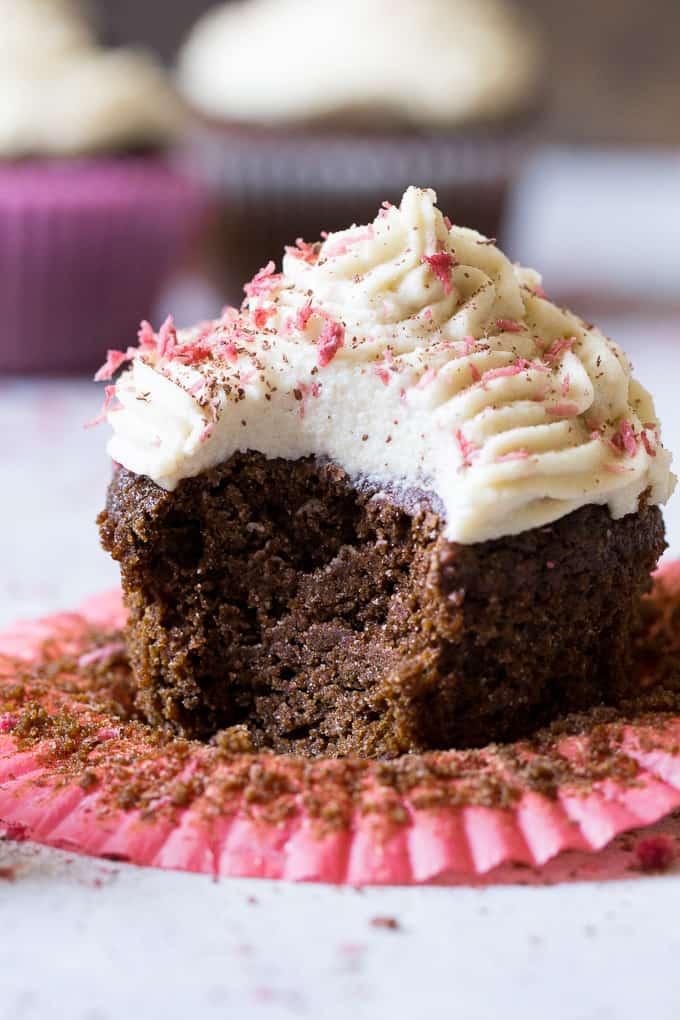 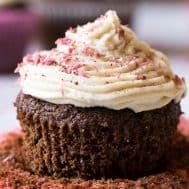 Print this Recipe
Did you make this recipe?
Leave a review
4.62 from 13 votes

Note: Prep time does not include time to make frosting or sprinkles

For the Coconut Sprinkles:

For the coconut sprinkles:

*This is for the pink color, you can also use the equivalent amount of juice from frozen and thawed raspberries

What I Used to Make My Paleo Chocolate Cupcakes:

Want more Paleo cupcakes, cakes, and baking recipes?  Try of of these!

How stubborn are you with cooking/baking?

What Valentine’s Day treats are you making this year?

END_OF_DOCUMENT_TOKEN_TO_BE_REPLACED

Get the Secrets!
These healthier, homemade thin mint cookies are ou