This savory and sweet “cornbread” Paleo Thanksgiving Stuffing is for all of you who want to keep with clean but still crave some bread in your stuffing!  A grain-free, dairy-free sweet potato bread is cubed and baked with sausage, apples, celery and onion, mushrooms, pecans and herbs for a delicious, filling and healthy Thanksgiving stuffing reminiscent of the classic. 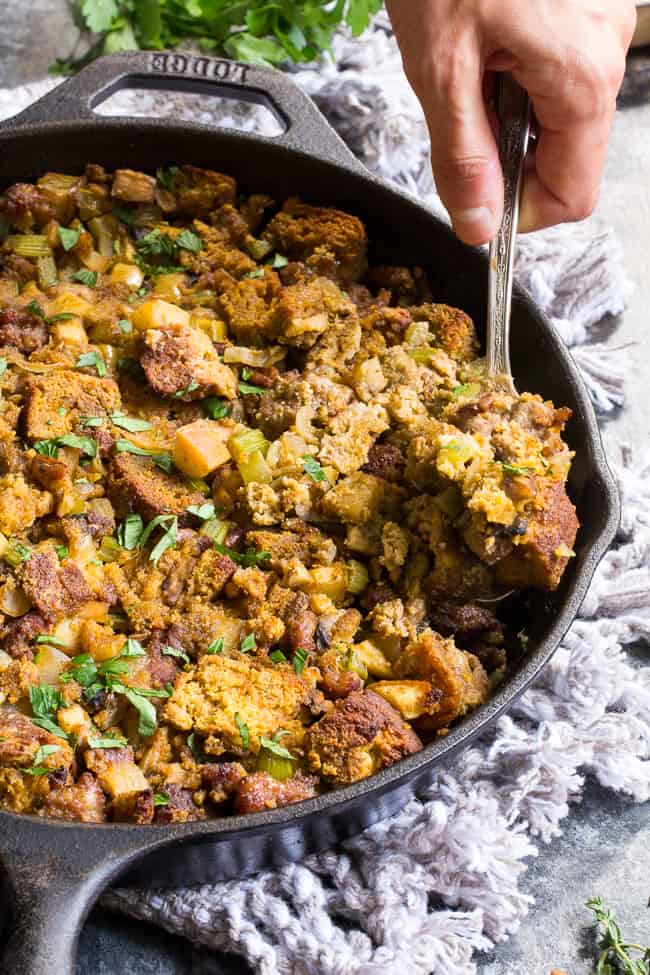 I’m a stuffing fiend – I totally admit it. And while I already had 2 separate Thanksgiving stuffing recipes on the blog, I just had to have another!  Not to mention that Thanksgiving is my favorite holiday.  I think that tends to happen when you grow up Jewish and don’t have Christmas, anyone else?  I wonder if that’s actually a thing.

But, anyway, regardless of whether or not T-Day is among your favorite days of the year, I think you’re going to like this stuffing.  It’s definitely the closest I’ve made to an actual bread stuffing, and whether or not you think the sweet potato bread actually tastes like cornbread, it will likely be the closest thing you’ll taste that doesn’t actually have a speck of corn in it.

Plus, the sweet potato makes the color pretty flipping exact, if I do say so. 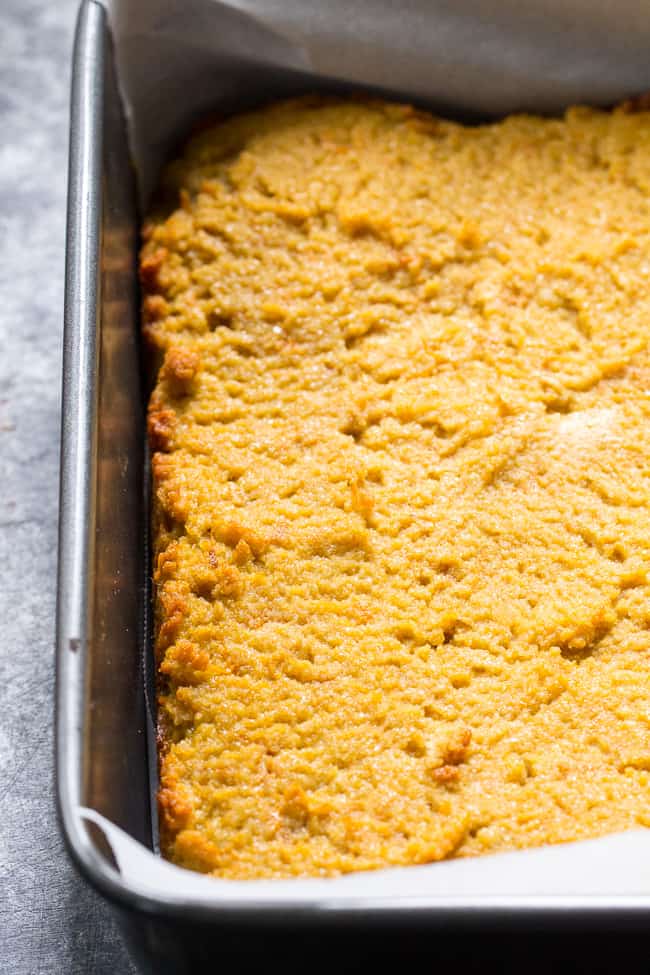 I mean, am I right about that?!  Moving on, I’ll let you know that the “cornbread” part of this recipe was inspired by my savory sweet potato herb muffins from last year.  I remember eating them and thinking they sort of tasted eerily similar to herbed corn muffins, and conveniently placed the info in the back of my mind for the following fall season.

Last year, I made a sweeter version of Thanksgiving stuffing with my simple paleo pumpkin bread, which while yummy, isn’t savory enough to count as a “real” stuffing.

Prior to that, I made a roasted butternut squash stuffing, which to be honest – is my absolute favorite (and also Whole30 friendly) – BUT it has no bread in it, which makes it just a bit too different for some to call it a “real” stuffing. 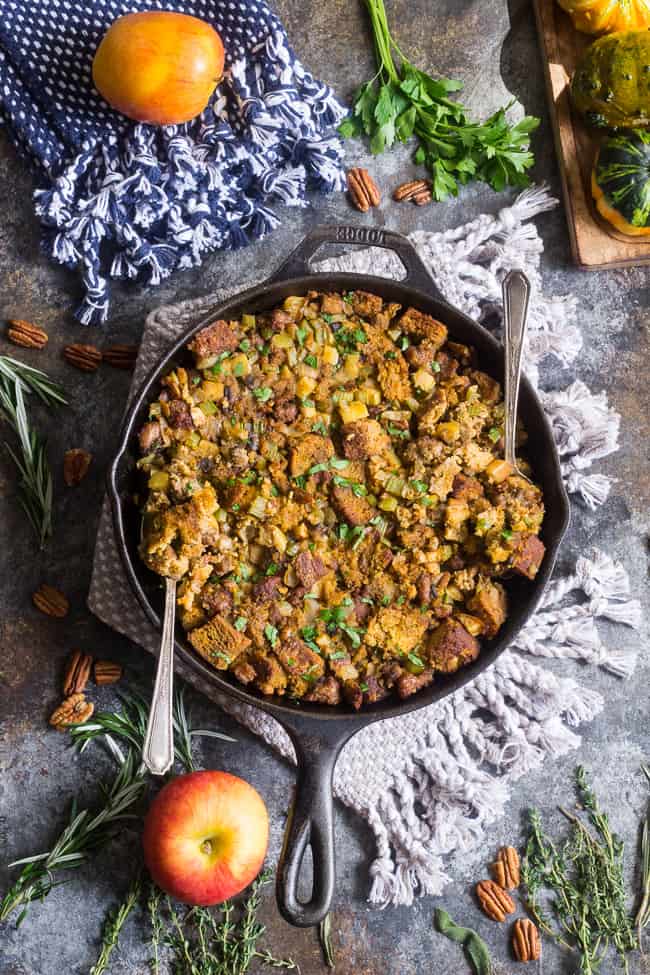 Enter THIS stuffing.  It has actual bread cubes in it (yay!) along with tons of savory, and sweet, goodies!  We have sausage (although you can omit if you want it meatless), mushrooms, onions & celery, apples, and pecans.  Plus, all those delicious savory herbs that make Thanksgiving smell and taste like Thanksgiving.

Add in a couple of whisked eggs and some bone broth and bake until the top is deliciously crisp and toasty, and you have a side dish that your whole family will love, and probably wouldn’t guess is Paleo. 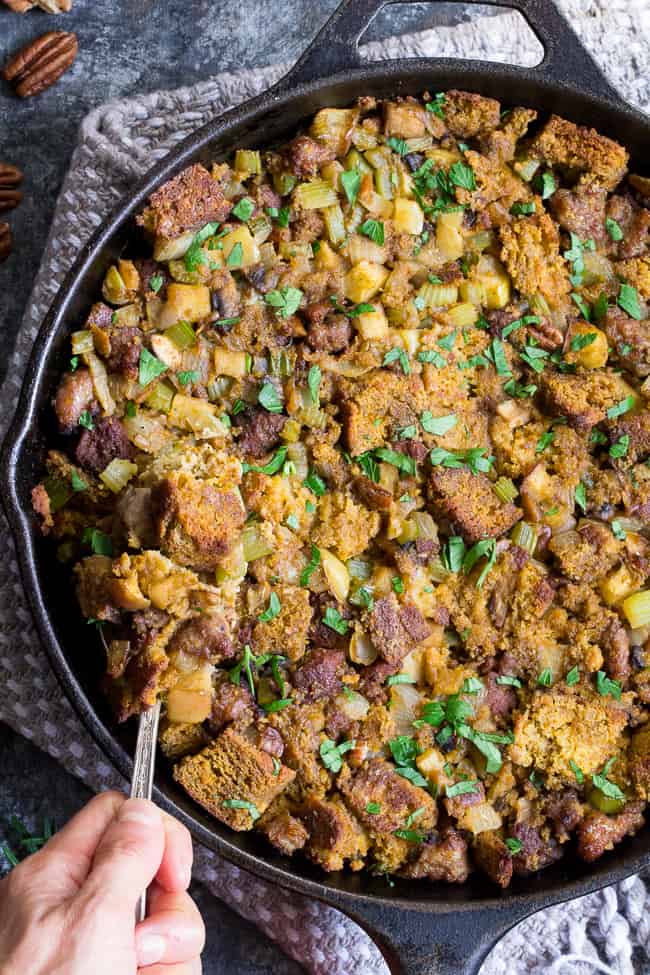 To prep this and make it easier for you, I highly recommend making the bread at least a day in advance, and up to 2.  That way, you can cube it and allow the cubes to dry out a bit, avoiding the toasting step.  However, it CAN be done all in the same day – just make sure you leave enough time for the bread to cool so you can cube it and lightly toast the cubes before mixing with the meat/veggie mixture. 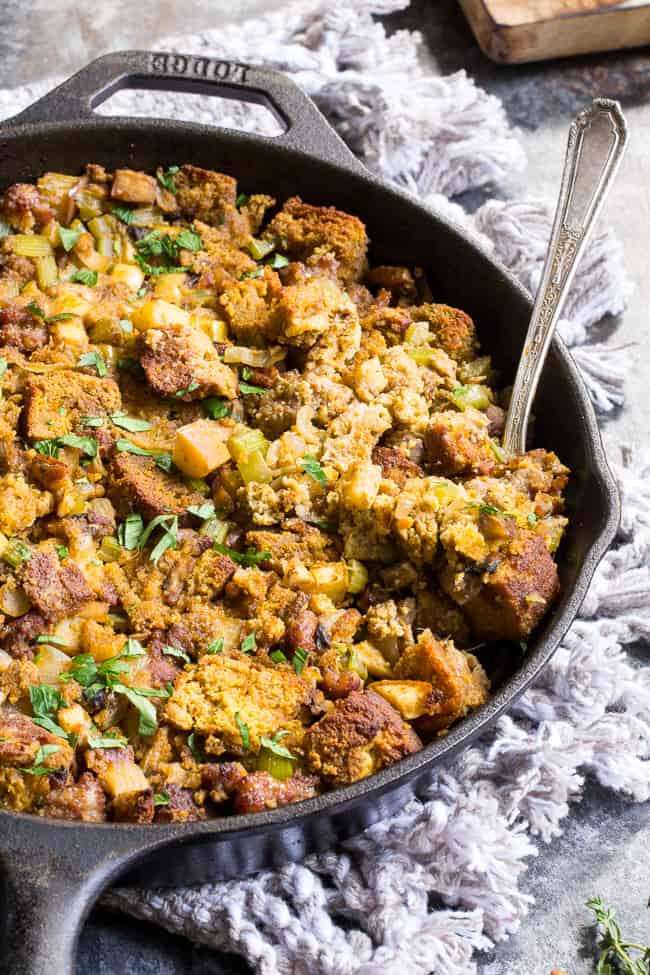 This recipe makes about 10 side dish servings, and you can easily double it to feed a larger crowd.   It’s also totally fine to add more/different veggies to suit your preferences – simply chop them and add them in with the onions and celery.  If you don’t have bone broth, you can also easily sub in organic chicken or turkey broth – I would use one lower in salt to avoid an overly salty stuffing.

I hope you’re ready for all the best Thanksgiving flavors to fill your kitchen!  Let’s cook! 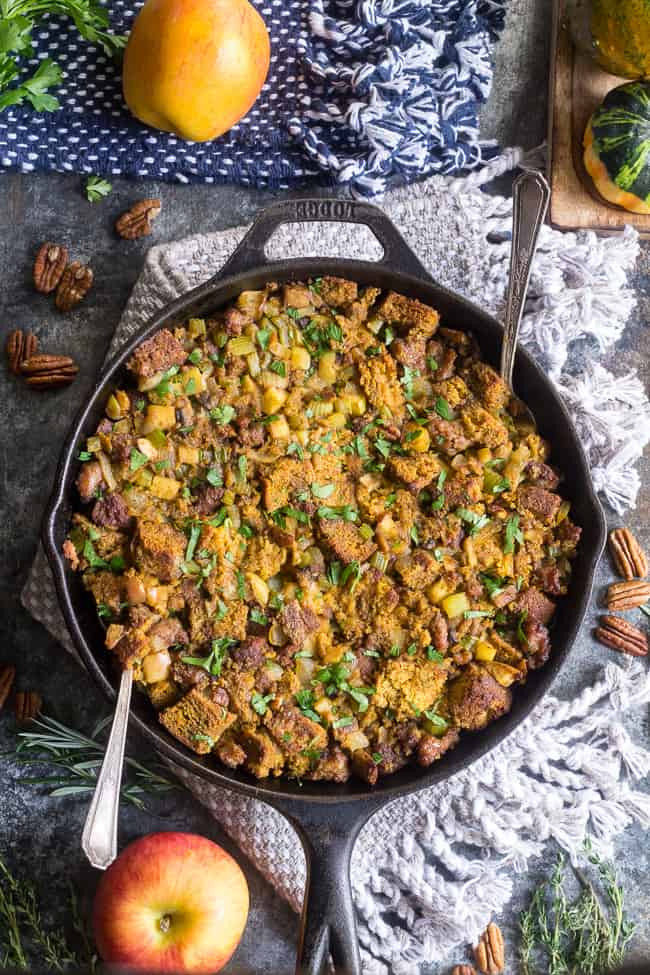 This savory and sweet "cornbread" Paleo Thanksgiving Stuffing is for all of you who want to keep with clean but still crave some bread in your stuffing!  A grain-free, dairy-free sweet potato bread is cubed and baked with sausage, apples, celery and onion, mushrooms, pecans and herbs for a delicious, filling and healthy Thanksgiving stuffing reminiscent of the classic.
Author: Michele Rosen
Prep Time: 25 minutes
Cook Time: 1 hour 15 minutes
Total Time: 1 hour 40 minutes
Course: Holiday Side Dish
Cuisine: dairy-free, Gluten-free, grain free, Paleo
Servings: 10 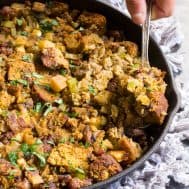 Print this Recipe
Did you make this recipe?
Leave a review
4.53 from 38 votes

*Alternatively, you can lightly toast the cubes in the oven

**Prep time does not include cooling time for the bread

What I Used To Make My “Cornbread” Paleo Thanksgiving Stuffing:

Want More Paleo Thanksgiving and Holiday Recipes?  Try One of These!