This no-bake chocolate pumpkin cashew cheesecake is a deliciously rich and creamy dessert for the holidays or any special occasion!  Two decadent vegan cheesecake layers are poured over a pecan, coconut and date crust and chilled to silky smooth perfection.  Paleo, vegan, dairy-free, gluten-free and family approved! 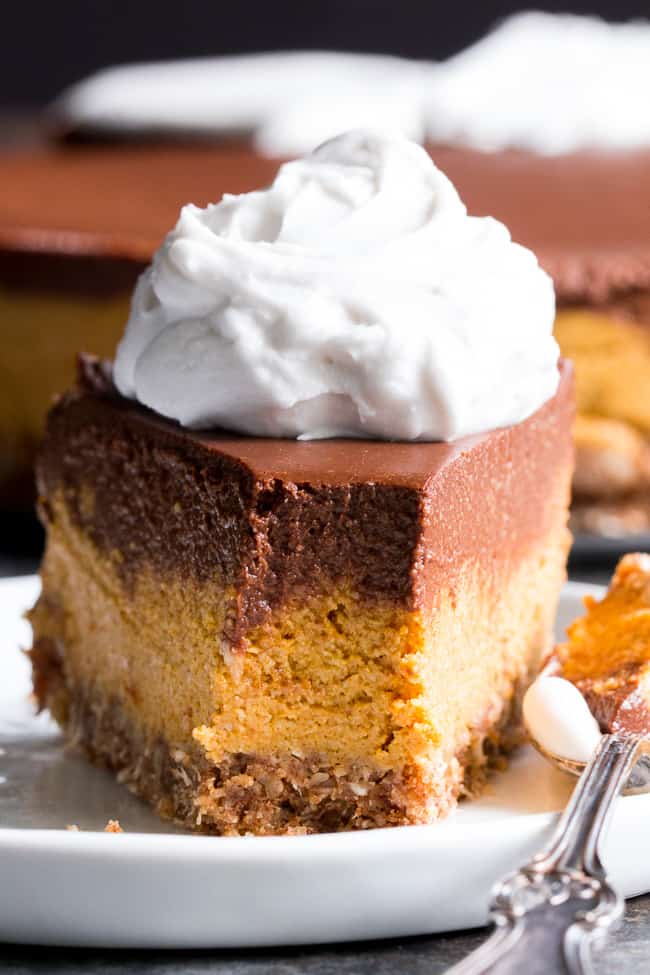 I knew since mid July that I wanted to make a paleo and vegan pumpkin cheesecake as soon as September came around.  I had my heart set on silky, creamy, almost mousse-like pumpkin spice filling over a chewy cinnamon pecan crust.

And then, right around September 1st, something happened.  By “something”, I’m talking about 4 pumpkin pies, plus an apple tart, all in one week.

Yes, I came out triumphant, but WOW, I was pumpkin-spiced out.  I was craving a break from cinnamon and I wanted to bathe myself in dark chocolate. 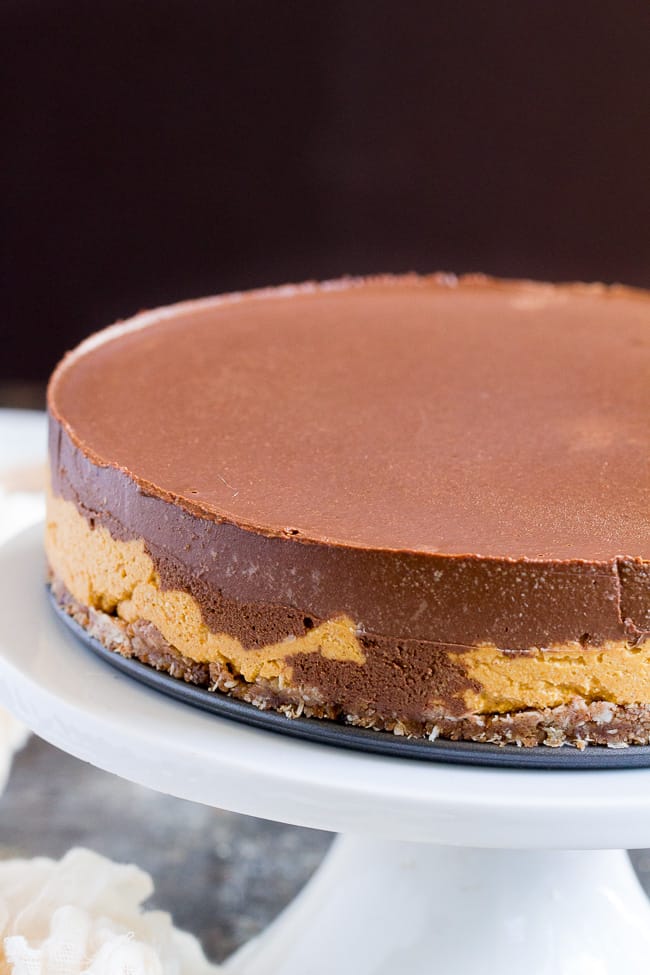 But when it comes to my recipe plans, I can be a little bit stubborn.  Well, only if I KNOW the idea is good.  In truth, I reject over half of my ideas and many of my plans never make it to the blog.  But the pumpkin cheesecake one?  I knew I needed to slap myself in the face and follow through with it.

But, the whole dark-chocolate-bathing-fantasy was sort of killing me.  Calling me and killing me.  So, I did what any reasonable, flexible, yet persistent food blogger would do – I compromised.  In the form of a layered chocolate pumpkin cashew cheesecake.  Let’s take a closer look at what went down here. 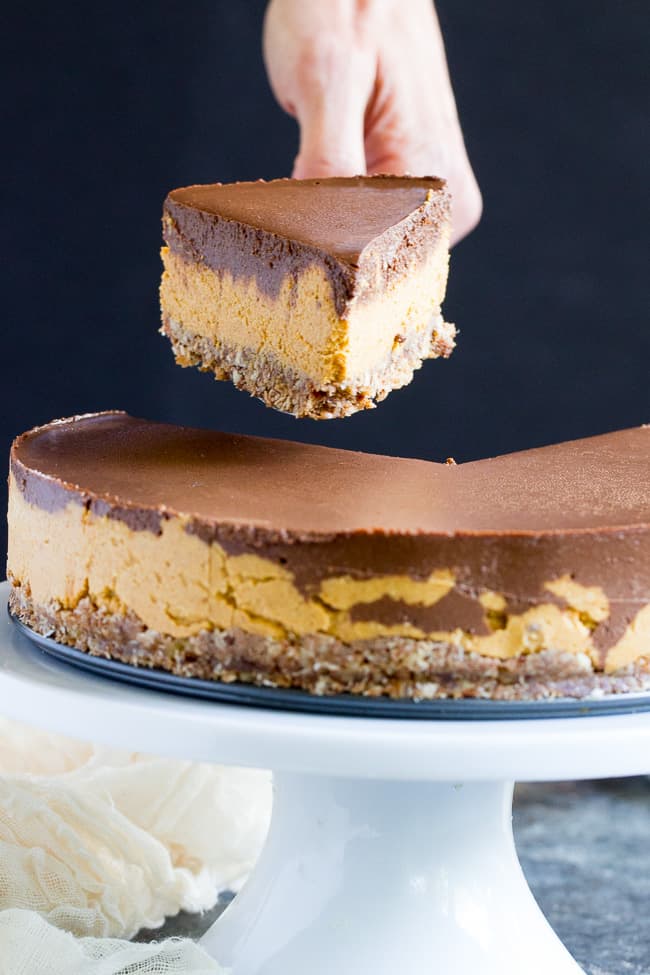 We mix the pumpkin cheesecake mixture into the pudding only to keep the texture consistent – but this layer is rich, creamy, dark chocolate “cheesecake” perfection. 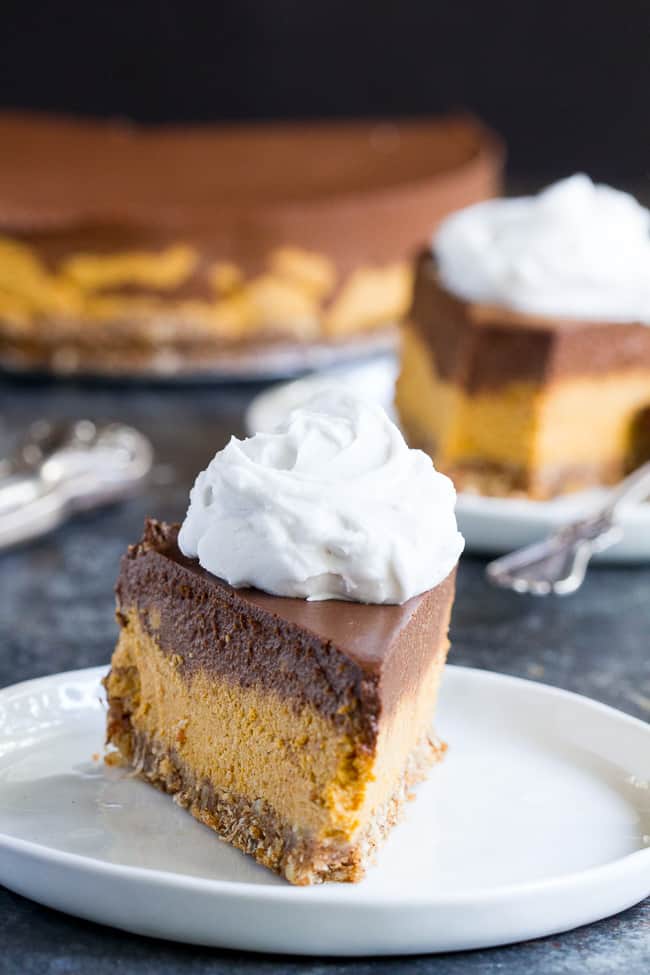 This cheesecake is almost no-cook, save for about 5 minutes of melting together the chocolate ingredients, and totally no-bake, paleo, and vegan.  Plus, it actually tastes like cheesecake – I’m not kidding.

My husband Adam said “some sort of pumpkin cheesecake thing” when I asked him the infamous “do you know what you’re eating?” question that I use to gauge how “real” a recipe tastes.  His answer speaks to how real-deal this one is – especially if you happen to know Adam and his dessert habits. 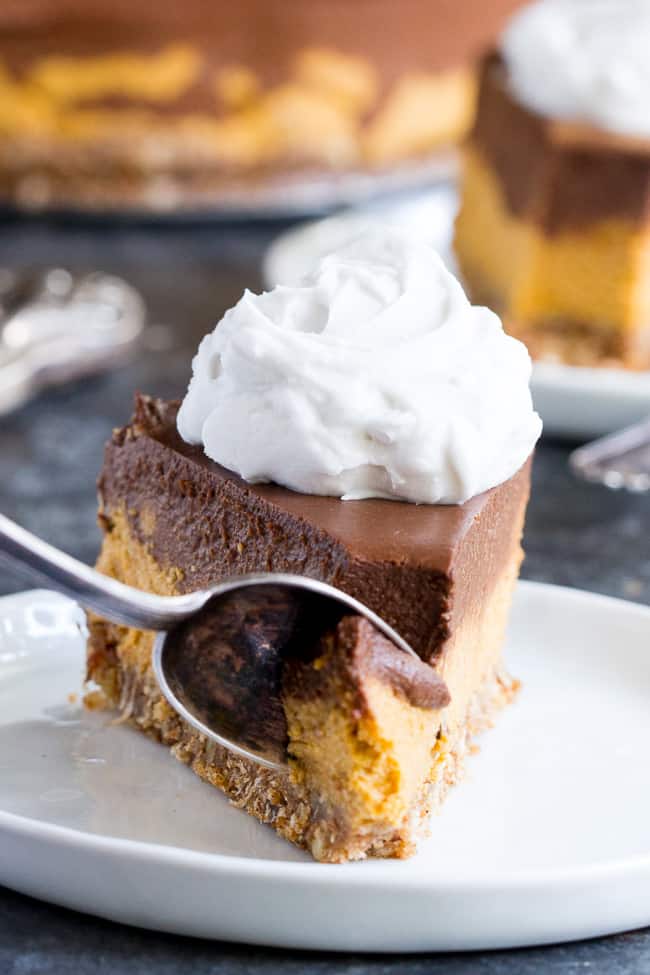 The pumpkin cheesecake mixture itself is pretty straightforward.  We have raw cashews for the “cheese” texture, coconut cream, pumpkin puree, coconut oil (use refined to avoid extra coconut flavor), lemon juice (for the “cheesecake” flavor), pure maple syrup to sweeten, plus a good dose of vanilla and pumpkin spices.

My daughter Diana couldn’t get over how creamy I got the filling considering what it was made of.  I used a food processor, but you can also use a high powered blender (like a Vitamix) to get the filling super smooth, creamy, and lusciously cheesecake-like.

Get excited – this chocolate pumpkin cashew cheesecake was a huge hit with my family and I know it will be with yours, too!  I hope you’re ready to no-bake – let’s get started! 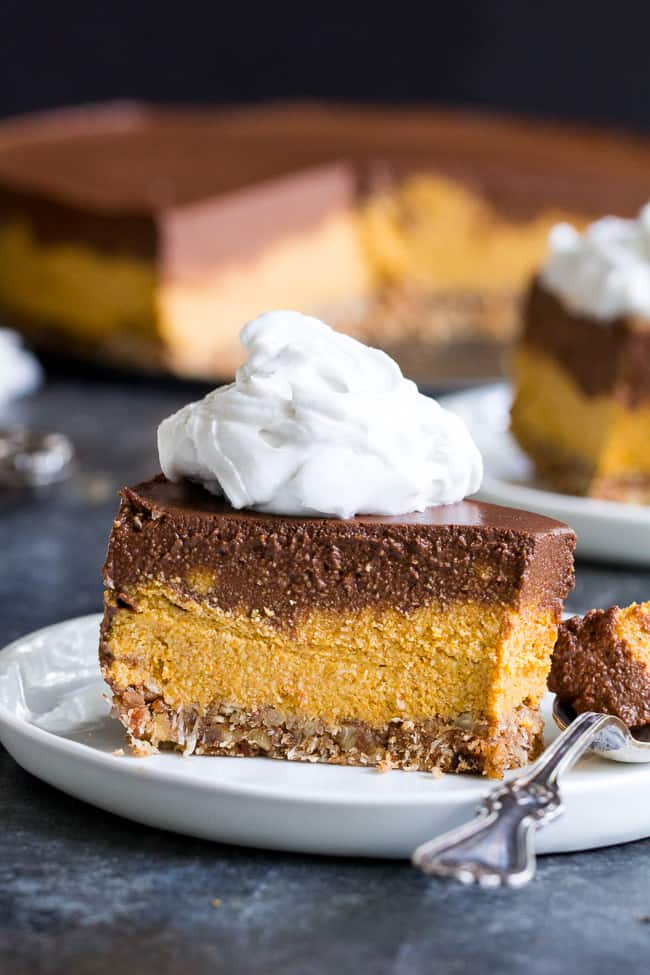 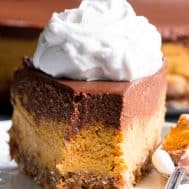 Print this Recipe
Did you make this recipe?
Leave a review
4.55 from 31 votes

*Soak your cashews in filtered water for at least 4 hours, or overnight, to soften.  Once soaked, rinse and gently pat dry with paper towel before using

**For a marbled effect, you can swirl both layers together with a thin knife, or simply leave them separate for a neat, layered appearance.

What I Used To Make My Chocolate Pumpkin Cashew Cheesecake:

Want More Paleo and Vegan Dessert Recipes?  Try One of These!