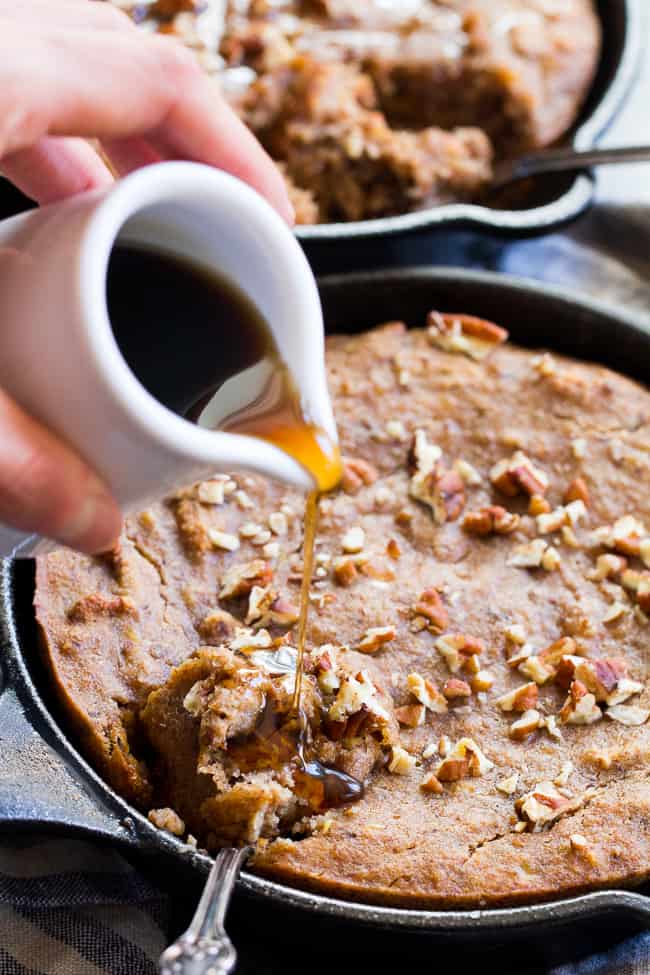 Last week, after coming home from a family weekend away in Woodstock, Vermont, I was pretty obsessed with maple syrup.

Yes, it’s ALWAYS showing up in my recipes, but after doing a maple syrup tasting (my kind of tasting!) and coming home with a couple of (BIG) jugs of it, I was even more inspired by maple syrup than usual. So much so, that I made three new recipes with it since then, and probably won’t stop just yet!

Anyway, I came home to find myself with a bunch of too-ripe-to-eat banana (this happens every time I go anywhere) and lots of deliciously robust flavored pure maple syrup.   So many options, what comes first? 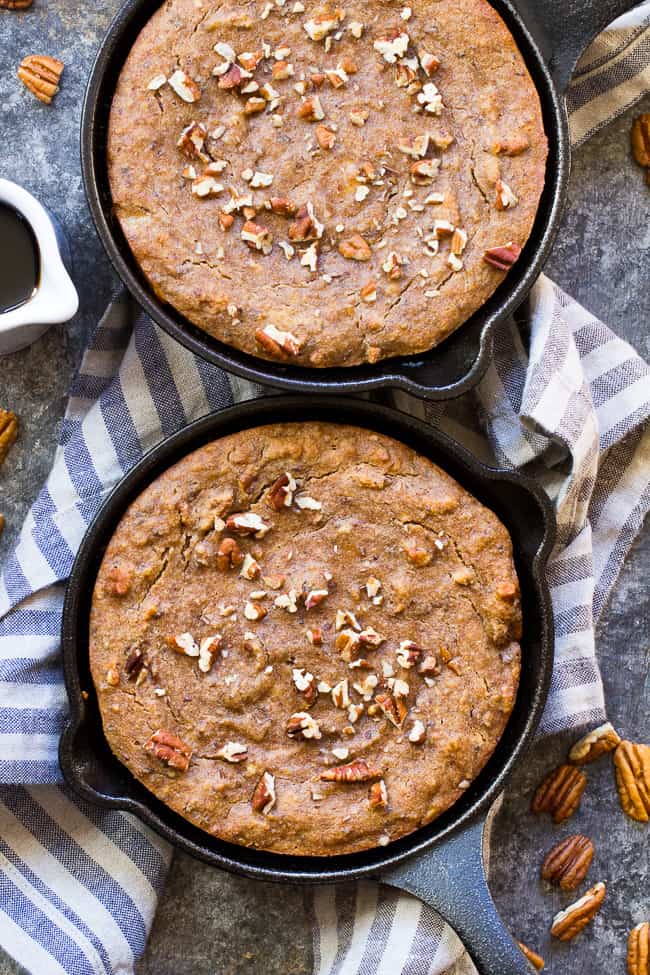 I ALSO came home with a couple of new food-photo props (the linen striped napkins and cute little white creamer) that were begging to be shot.   With skillets, or so they told me.  So that started narrowing down my decision making process.

In truth, I didn’t feel like making pancakes or muffins, plus little skillets are my favorite for photos, anyway.  Everything just looks and feels more fun in its own little skillet!

And so, this maple pecan banana breakfast bake came to be, in all its paleo and vegan glory. 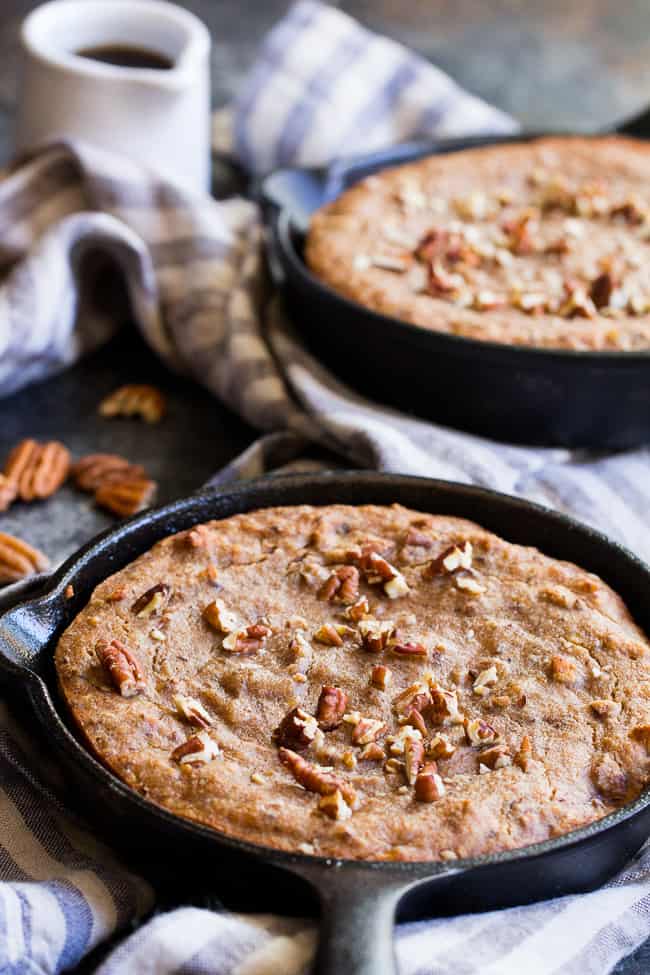 I do realize that “breakfast bake” is sort of a vague term.  One that I probably overuse (oops!)  Naming recipes is not an exact science!  You see, this is not really a pancake, not an actual cake, and not a loaf of bread.  But, it’s also sort of all of those things – and this is my dilemma.

What this breakfast bake is, is a soft, moist, slightly gooey (in a good way) sweet and healthy breakfast treat that my whole family loved – even the members who aren’t thrilled with pecans.

Maple syrup and bananas make up for a lot, I will say that! 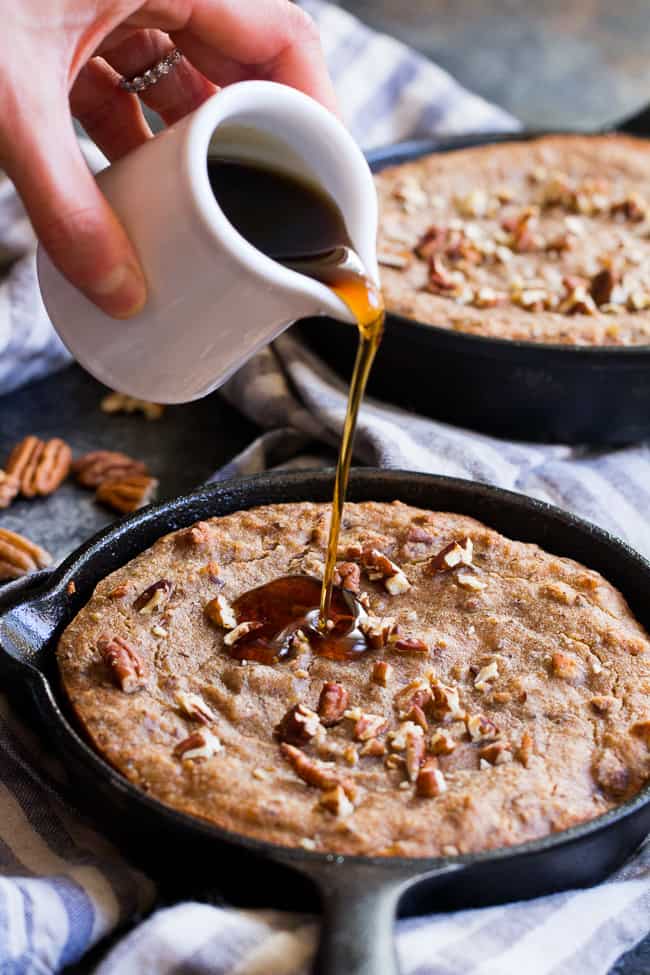 The recipe itself is incredibly easy to throw together – all the ingredients are mixed in one bowl, no gadgets necessary, and then transferred to either 2 small cast iron skillets or a larger baking pan to bake.

Aside from the banana breakfast bake being paleo (duh), egg free, and vegan (score!) it also happens to be coconut free and oil free – something I didn’t actually plan on in advance, but nonetheless it worked out to be a nice change!

Surprisingly, I’ve heard from many readers lately who are not fans of coconut and have asked for coconut-free recipes and substitutions, so yes – this one is safe and yummy for anti-coconutters! 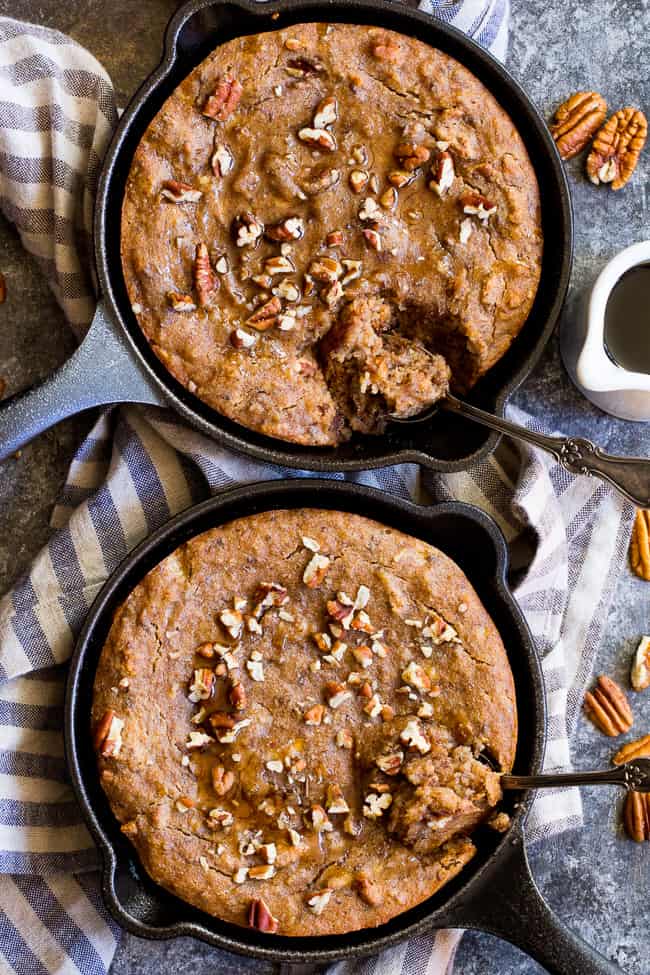 Anti-coconutters.  Not sure about that one!  In any case, instead of coconut oil, I used a combination of almond butter and applesauce for texture and moistness and I loved the result.  It’s almost a cross between a moist banana bread and banana blondies, if that makes sense!

It’s definitely best when still warm out of the oven, but you can also refrigerate leftovers too, just as you would with blondies or banana bread.   After refrigerating, just warm up for a few minutes in the oven to get that fresh out of the oven flavor.

Since this breakfast bake is more dense and gooey than a bread, it won’t exactly “slice” out of the oven – as you can see from the photos!   Definitely no shame in eating this right out of the skillet/baking pan – I always eat at least one of my meals straight out of a skillet and wouldn’t have it any other way.

Okay, let’s wrap this up so we can start baking!  Gather up the ripe bananas and preheat your oven – let’s go! 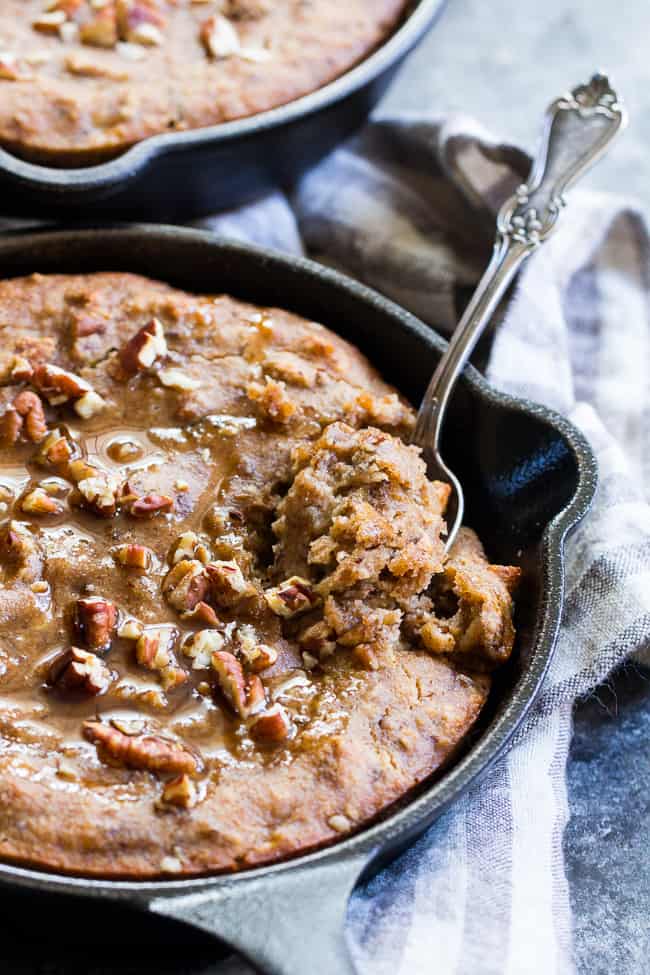 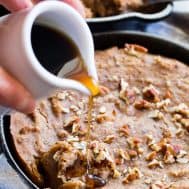 Print this Recipe
Did you make this recipe?
Leave a review
4.79 from 19 votes

*To make the flax eggs, mix 2 Tbsp flaxseed with 5 Tbsp water and set aside for 10-15 mins, then add to recipe as you would raw eggs.

What I Used To Make My Maple Pecan Banana Breakfast Bake:

Want More Paleo and Vegan Baking Recipes?  Try One of These!

Favorite use for maple syrup?