This simple sweet potato hash with kale and bacon is your new paleo and Whole30 go-to breakfast!  Crispy bacon, kale, and sweet potatoes are seasoned and cooked up perfectly in a big skillet, then topped with eggs and garnished with green onion.  It doesn’t get easier or more delicious than this hash! 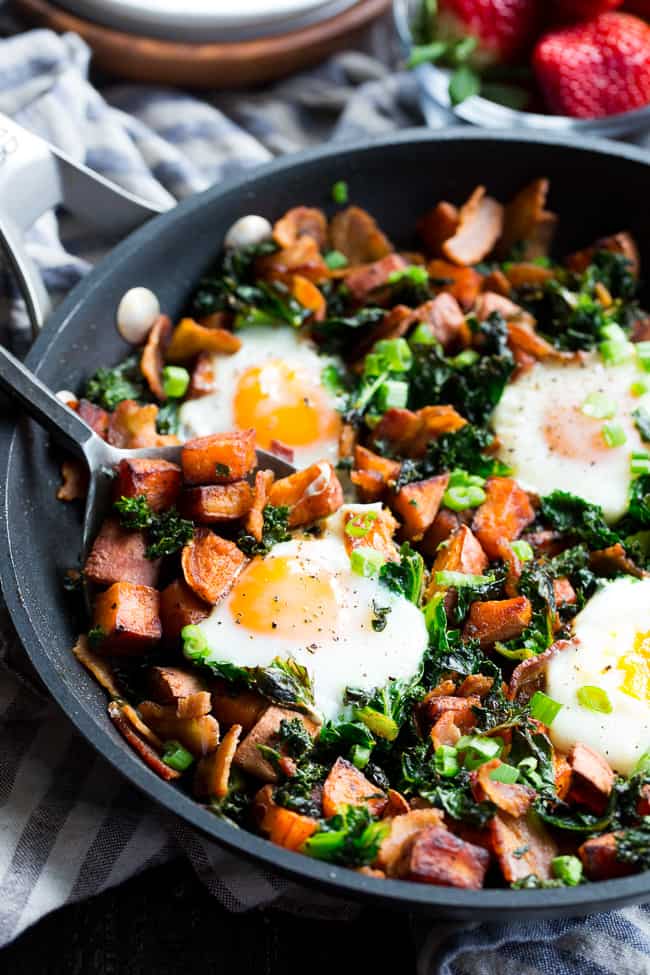 The famous sweet potato hash that I LIVE ON (actually LIVE on some days) is finally getting its own “official” spot on the blog.

Okay, I know that some of you are longtime followers that are well aware I’ve had a single-serve version of this hash on here for a couple of years.  So, why do I a separate recipe if I’m just making more of the same?

Here’s the deal – to preserve the quality of this hash (AKA keep it crisp-pay!) the method needs to change just a bit.   Stay with me, it’s not a big change, and it’s well worth it to feel more people this delicious crispy sweet potato hash! 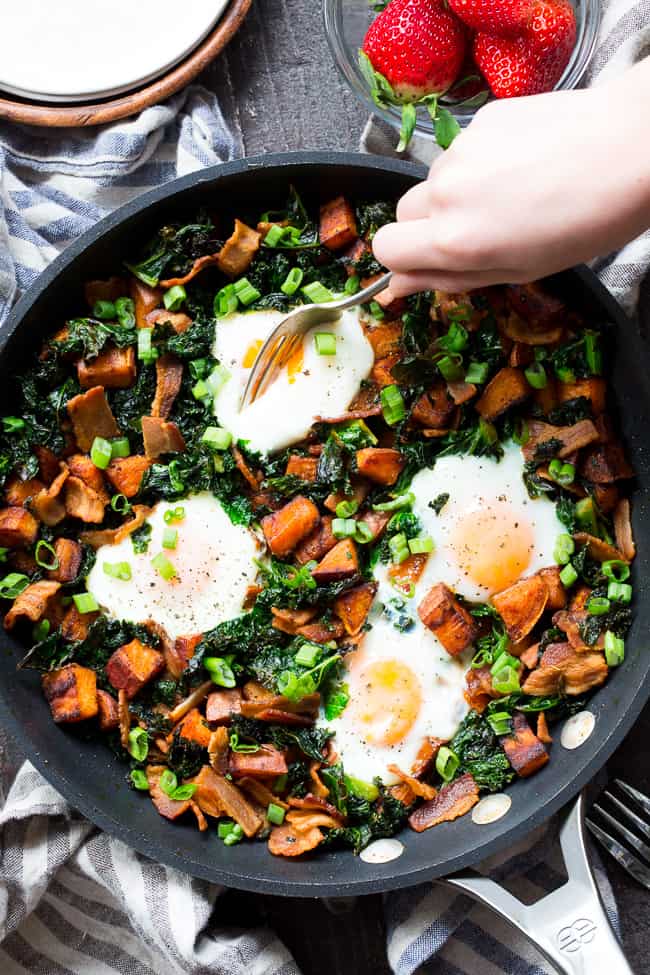 It all comes down to more quantity = less room = less crisp for all the ingredients.

Unless you have a giganto skillet that heats nice and evenly (I wish) you simply can’t expect a hash for 4 to come out just as crispy made all in one pan as a hash for 1.

And let me tell you – if anyone in your household happens to grab a bite of your hash, they’re going to want some (proven fact.).   Even people who believe they “hate” kale will want to know what that crispy fried green thing in your breakfast is, because it tastes like chips, and, please share.  Please. 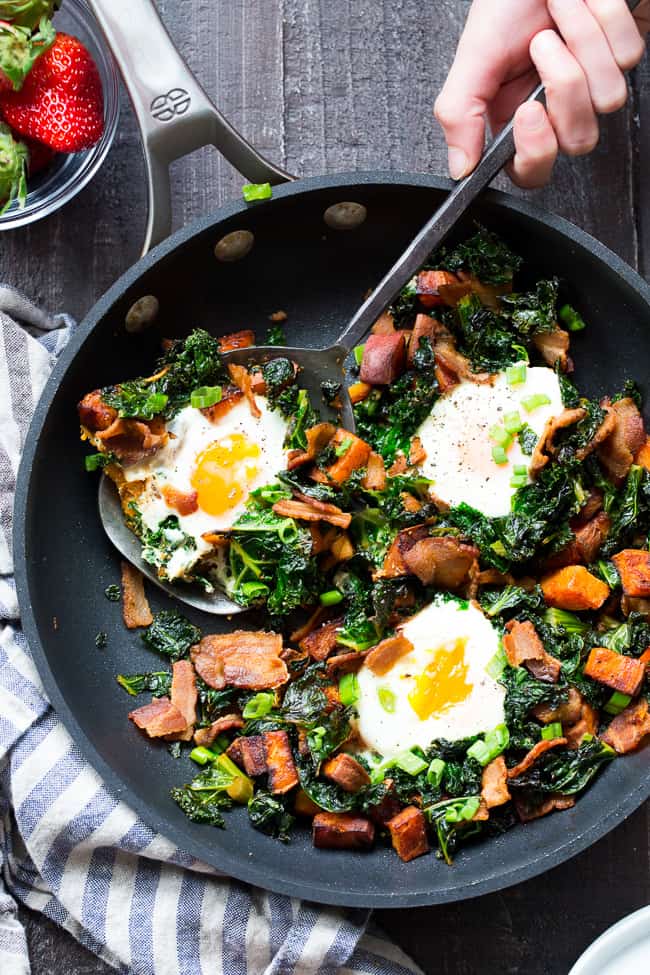 Anyway, the change is really very simple and just involves using two skillets instead of one – phew!

You’ll need a cover for both skillets, although I stress to you that these covers don’t actually need to match your skillets exactly – only approximately, if that makes sense!

For mine, I just use whatever covers I’ve had lying around from years of collecting cookware, and I’ve never had an issue with something not cooking properly.  Not professional, but this is real life after all, and if it ain’t broke, no need to fix. 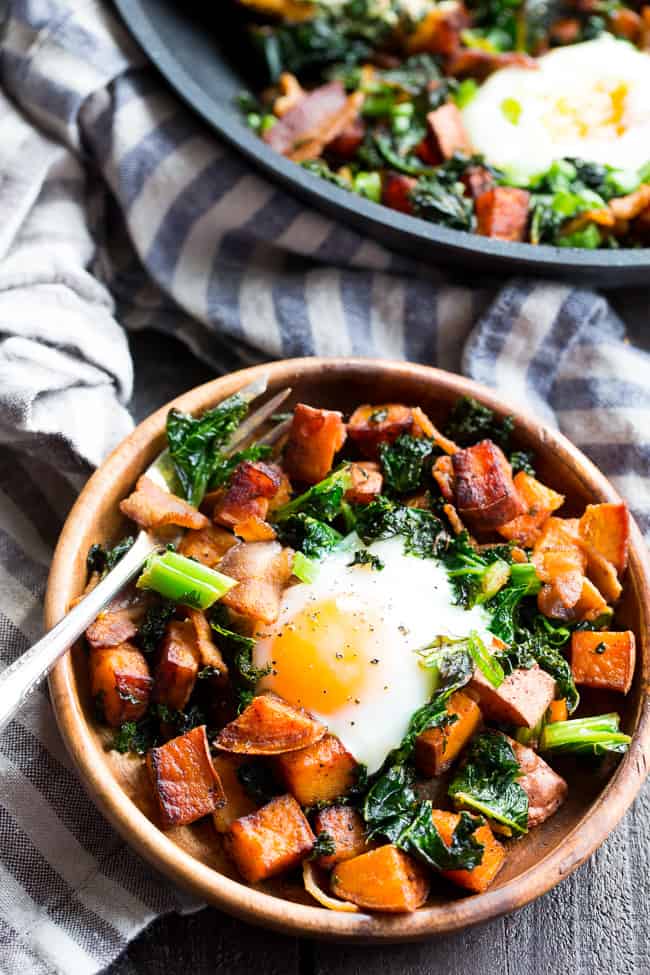 So, the two skillets.  One will be used to cook your sweet potatoes, and, the other to cook your bacon and kale.

One of these skillets does need to be oven proof – not necessarily cast iron – but something that can withstand a 400 degree oven, since you’ll be baking your eggs in the skillet with the hash at the end.

I actually did not use a cast iron when I made this the other day, but rather these non-stick frying pans which are great for cooking sweet potatoes!  However, if you have well-seasoned cast iron skillets, they’ll work fine for this hash. 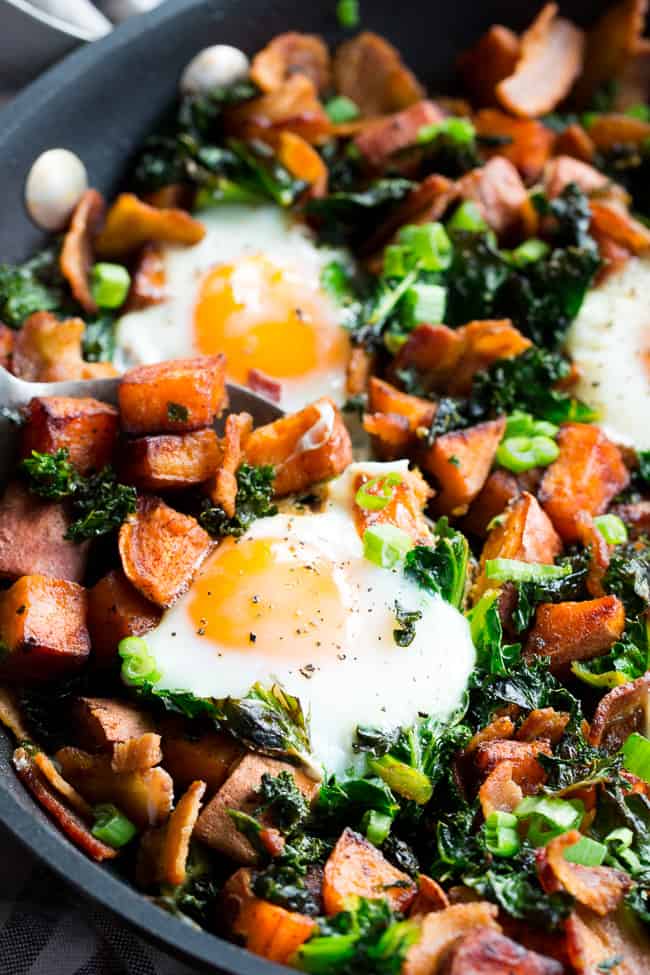 So, by popular demand – here it is – the “big” version of my favorite sweet potato hash with kale and bacon!  Super simple, with just 4 ingredients plus salt and seasonings – really can’t beat that!

Speaking of seasonings, I didn’t specify anything because that’s where you can really customize this hash to suit your tastes.

Some days I season my potatoes with salt, pepper, and smoked paprika, other days just salt and pepper, and sometimes I get fancy and go with taco seasoning, OR this delicious breakfast blend from Primal Palate.  Get creative and go with your cravings here!

I hope you’re ready to make this paleo and Whole30 sweet potato hash!  And finally – you’ll have enough to share – let’s go! 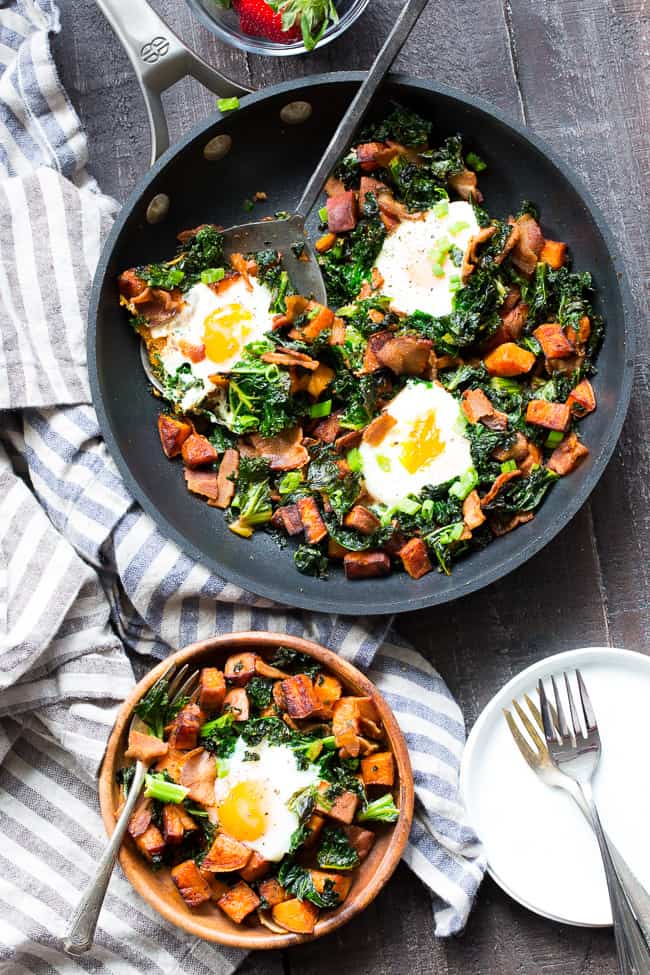 This simple sweet potato hash with kale and bacon is your new paleo and Whole30 go-to breakfast!  Crispy bacon, kale, and sweet potatoes are seasoned and cooked up perfectly in a big skillet, then topped with eggs and garnished with green onion. 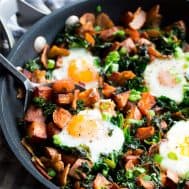 Print this Recipe
Did you make this recipe?
Leave a review
4.74 from 15 votes

*Any cover that mostly fits your skillets will work here - don't worry about using a "match" - none of mine fit perfectly!

What I Used To Make My Sweet Potato Hash with Kale and Bacon:

Want More Paleo and Whole30 Hash Recipes?  Try One of These!