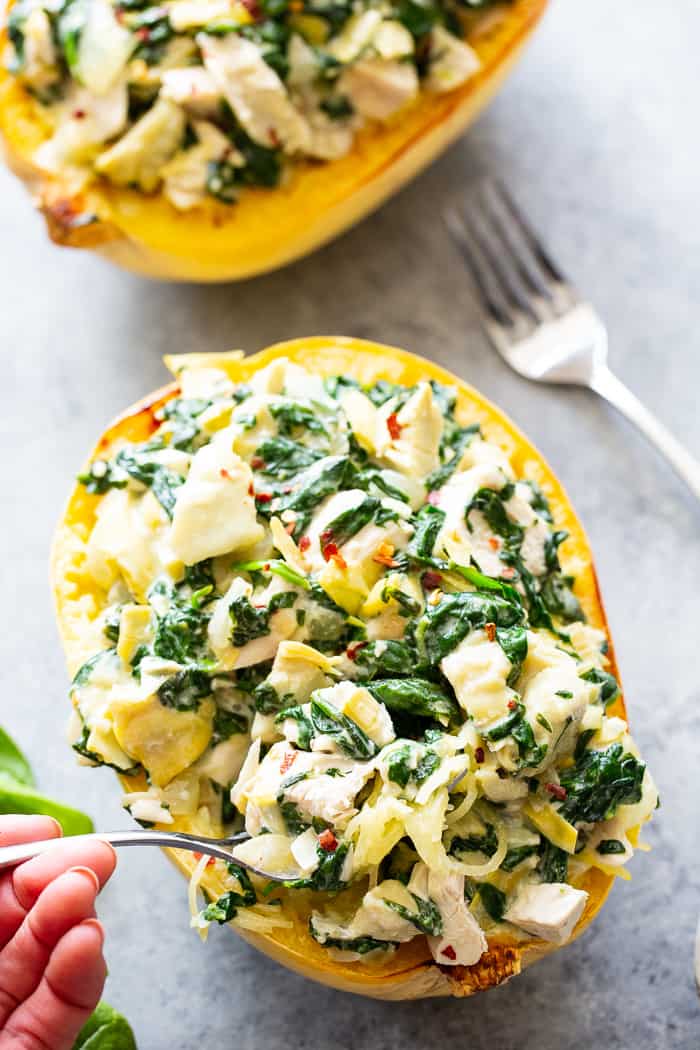 I’m a lifelong fan of the spinach artichoke combo.  From the first time I tried a hot spinach artichoke dip, to making these potatoes, this casserole, and now this stuffed spaghetti squash.  It’s pure love!  When it comes to this combo you almost just can’t go wrong!

Of course, when we’re talking about making things paleo, and, more specifically dairy free, getting that creamy, flavorful sauce to go with the veggies can be somewhat tricky.

The first time I tested out a Whole30 and Paleo baked spinach artichoke dip I was definitely skeptical.  The non-paleo versions I’d made in the past were completely loaded with cheese, so obviously I wondered if it would even be worth it to try and recreate such a classic. 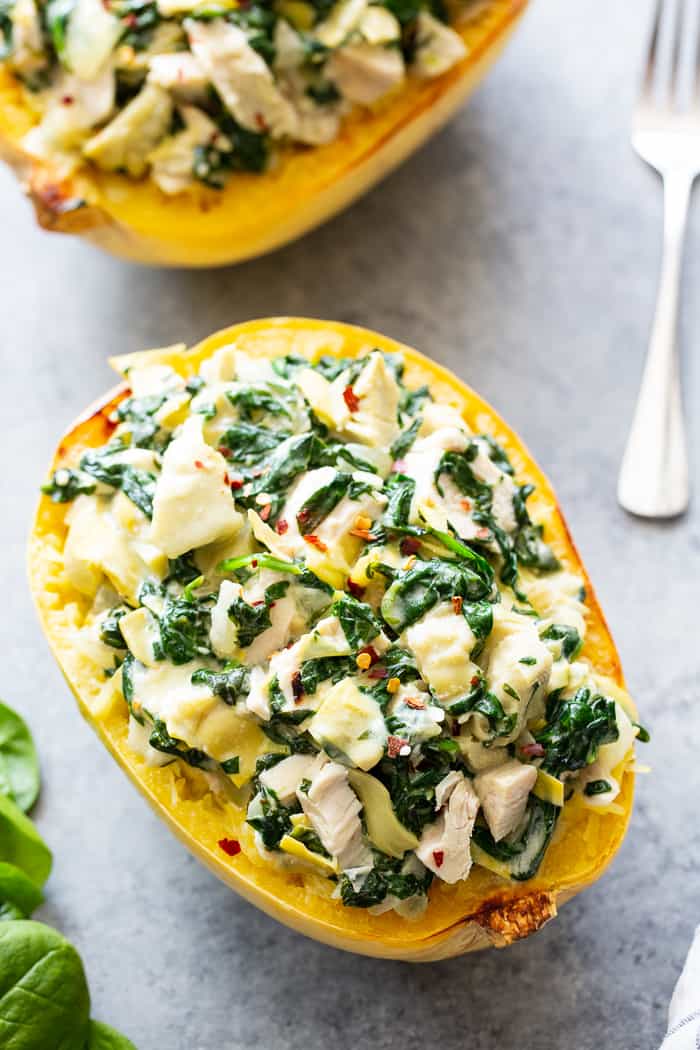 As it turns out, it’s totally possible to recreate the “cheesy” flavor with a few tricks!  It will sound like an odd combination to you at first if you’re new to Paleo/Whole30 cooking, but in the end it all makes sense.

Don’t be scared of nutritional yeast if you haven’t used it before.  It’s gluten-free, dairy-free, Whole30 friendly and has a cheesy flavor that makes it a great sub for parmesan, if used in moderation. 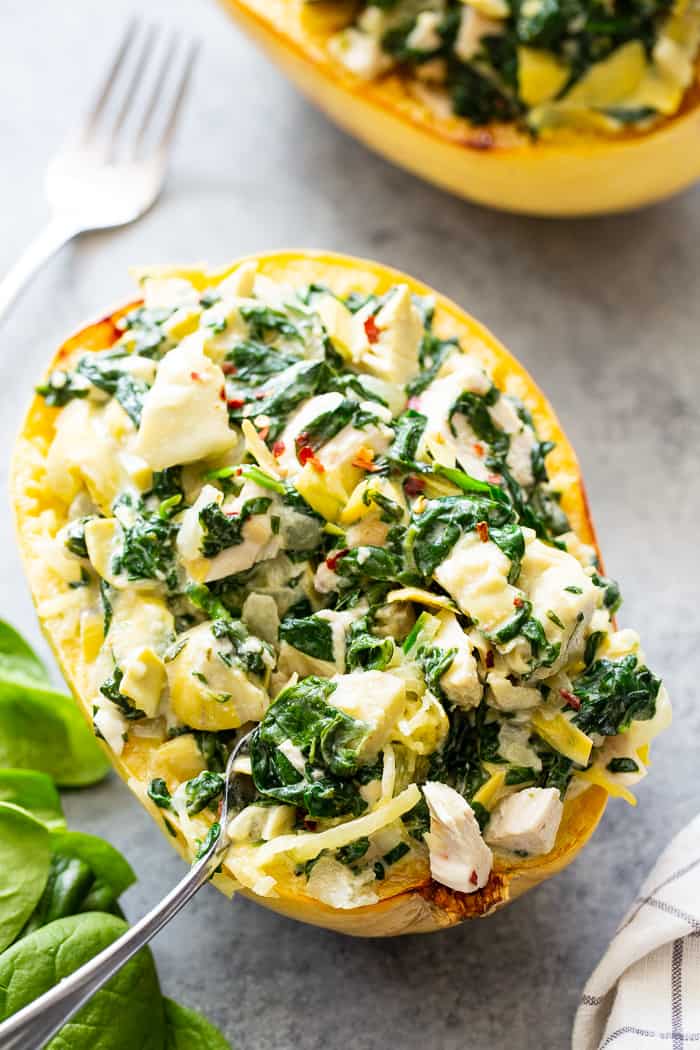 Along with the creamy sauce, we also have chicken added to the spinach artichoke mixture.  To make this recipe simple, I decided to put both the spaghetti squash and chicken in the oven at the same time.  They bake for slightly different amounts of time, with the squash needing about 5 minutes longer.

While they bake, you’ll make the spinach artichoke mixture on the stovetop and prep the creamy sauce. Once the spaghetti squash is done, you can either stuff it with the mixture as pictured, or release the spaghetti strands first, and toss together.

I’m personally loving spaghetti squash “boats” lately – just scrape the spaghetti squash to release strands, then stuff with the filling.  Then, everyone can scoop their portion right out onto plates for easy serving.  Or, if you’re like me, you can always eat it right out of the squash boat! 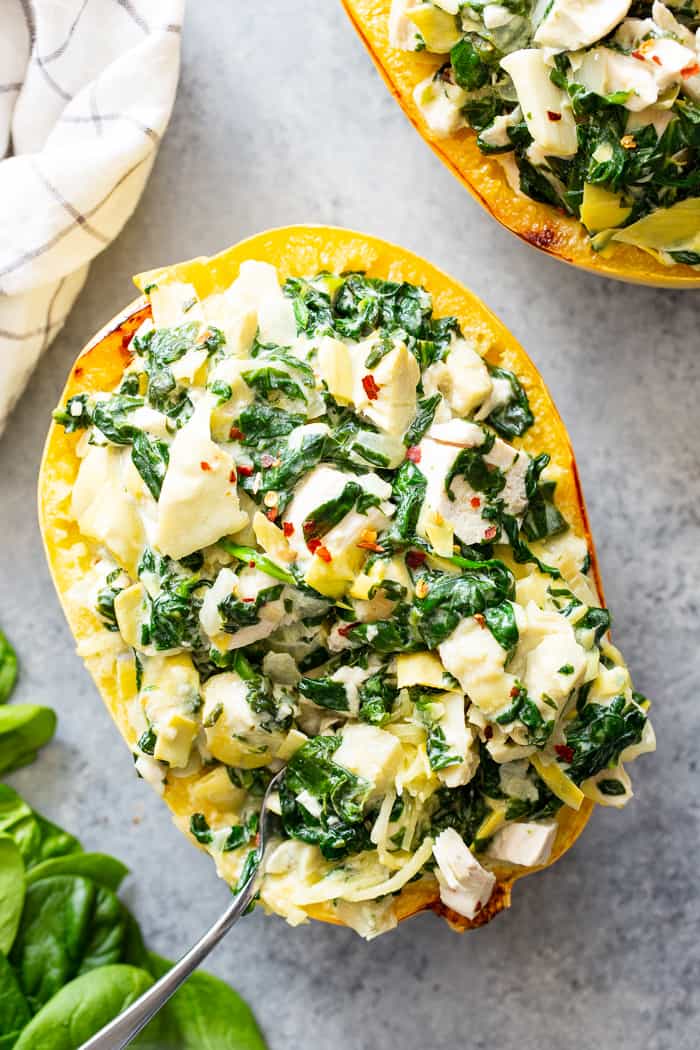 If you’re a spinach artichoke lover like I am, you are in for a serious treat with this stuffed spaghetti squash.  The filling is just like a good creamy dip and totally addicting – I found myself grabbing bites before stuffing the squash, and while taking pictures!

Grab your squash, preheat the oven and get ready for a meal you’ll want to make again and again!  Let’s go! 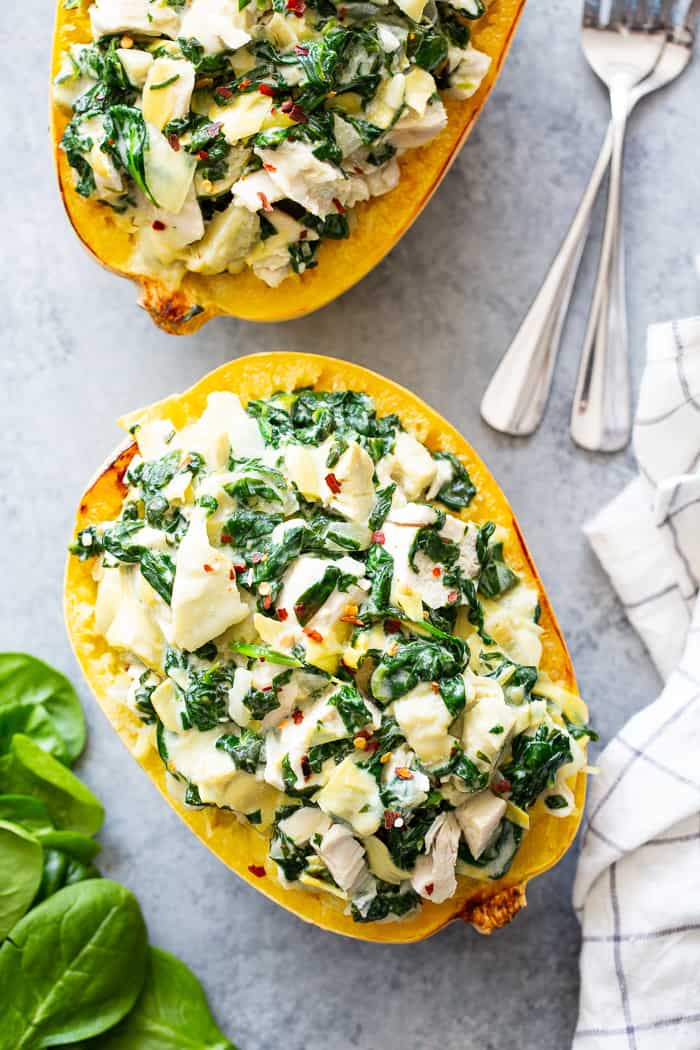 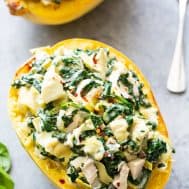 Print this Recipe
Did you make this recipe?
Leave a review
4.65 from 39 votes

*Use the cream only, since even full fat milk will make the sauce too watery.

Want More Spinach Artichoke Recipe Ideas?  Try One of These!