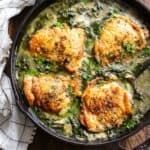 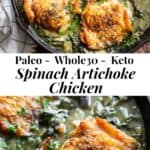 This one-skillet spinach artichoke chicken is crispy, creamy, and packed with flavor!  It’s Paleo, Whole30 compliant, keto friendly, dairy free, and made all in one skillet.  Great served alone or over cauliflower rice! 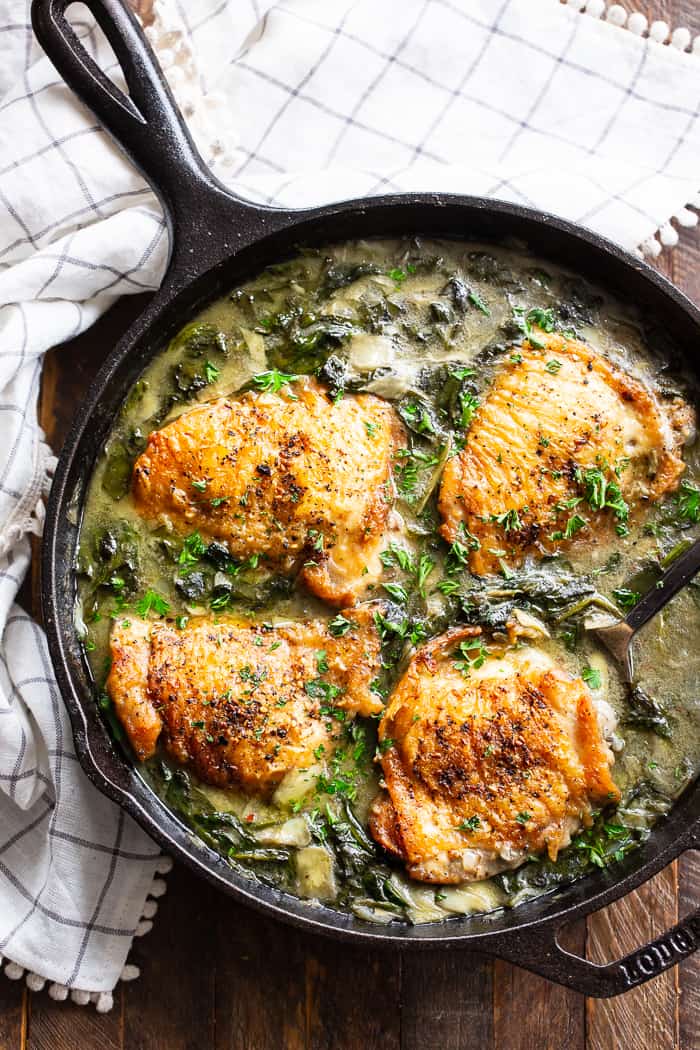 I’m a fan of spinach artichoke anything, and this One-Skillet Spinach Artichoke Chicken is one of my favorite recipes.  It’s hard to imagine something involving spinach and artichoke that wouldn’t sound appealing at all.  Aside from desserts of course.  That would just be terrible.

Of course, spinach artichoke is an amazing flavor combination on its own and in dip form, but I especially love it with chicken.  I even have a creamy chicken spinach artichoke dip that’s one of my favorite dips ever!

But, I’ve also been meaning to try out a One-Skillet Spinach Artichoke Chicken.  It’s taken me way too long to finally execute it! 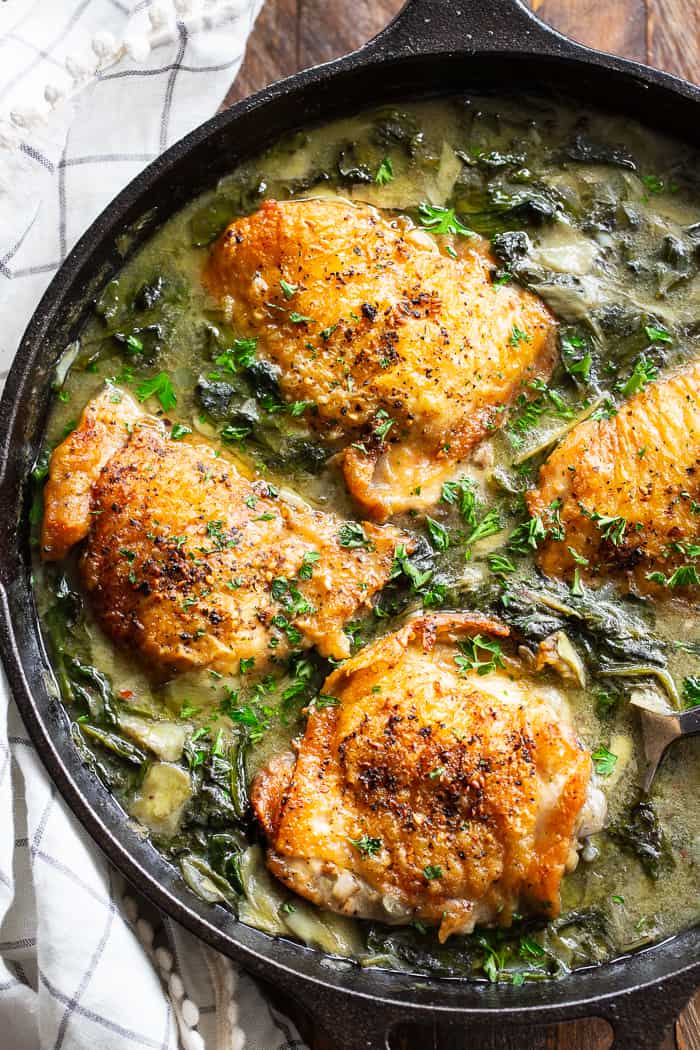 Did you notice that there’s no cheese in this One-Skillet Spinach Artichoke recipe?

The thing with spinach artichoke dips and other combos in my opinion, is that we naturally think “cheese“. Honestly, this happens with so many things that I’ve attempted to make Whole30 versions for, and that makes it an extra challenge, for sure.

How Can We Do Spinach Artichoke Without the Cheese?!

I’m not about to tell you that I’ve made something that tastes identical to a cheesy spinach artichoke chicken.

But, I will say that what I’ve made is a really tasty, dairy-free, Whole30 compliant version of a creamy spinach artichoke chicken that will make you very happy! 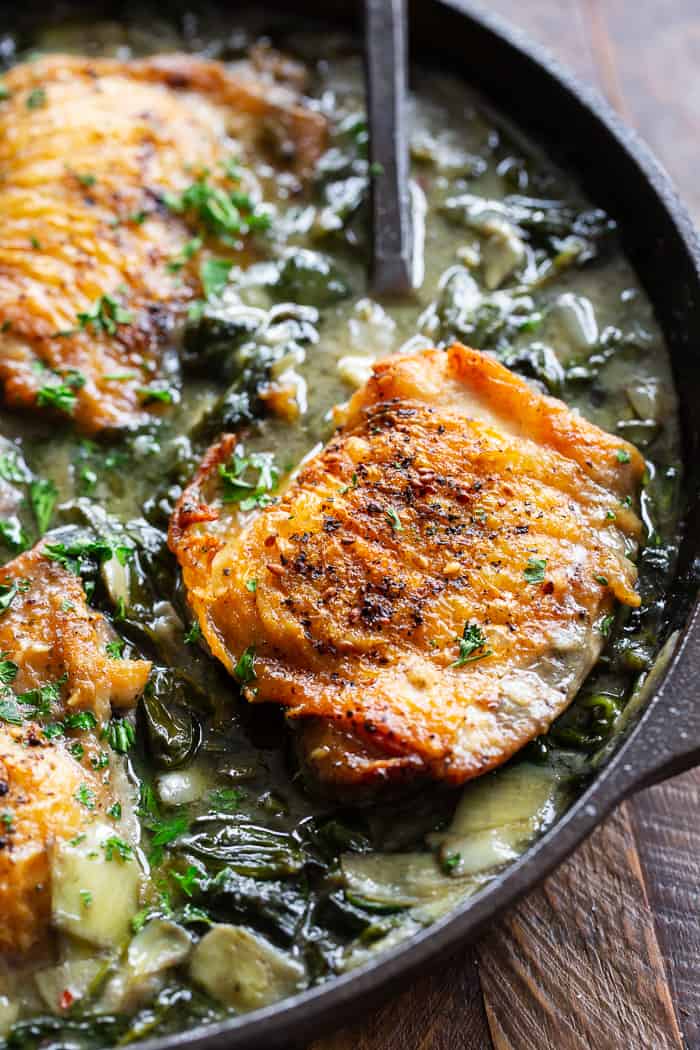 The secret is in the right seasonings + the right amount of coconut milk and thickener to create a sauce that contains no dairy, yet has a creamy texture to it.

Why Should I Use Full Fat Coconut Milk?

And nope – just because we’re using coconut milk DOES NOT mean that this One-Skillet Artichoke Chicken tastes like coconut! Like, actually, this does not taste like coconut one bit.

What is DOES taste like is heavenly, at least in my opinion!  You have the crispiness of the chicken skin with the creamy Spinach Artichoke mixture – seasoned just right – and of course made all in one skillet! 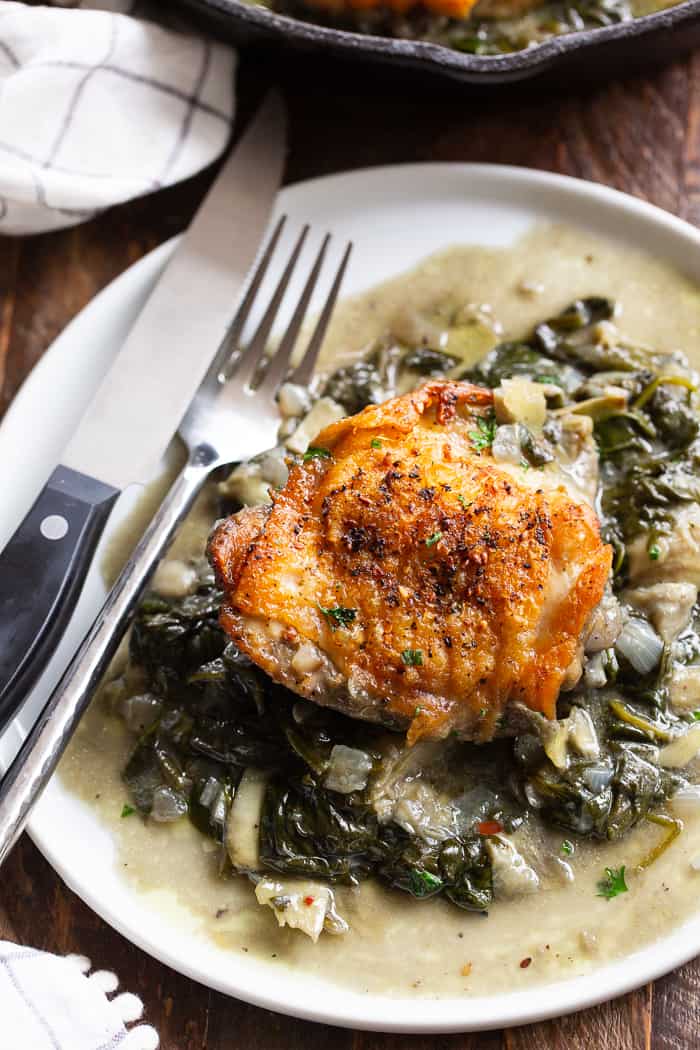 What Can I Do with Spinach Artichoke Chicken Leftovers?

Since I often wind up eating the leftovers of my recipes as lunches in the days after making them, I can tell you that the leftovers save very well!

When it comes to completing a successful, and enjoyable Whole30, leftovers are basically the rule.  The more tasty leftovers we have available make life easier in general, in my opinion!

I hope you’re ready for all the things you love about Spinach Artichoke in this healthy, Whole30 One-Skillet Chicken dinner!  Grab your favorite skillet and let’s get going! 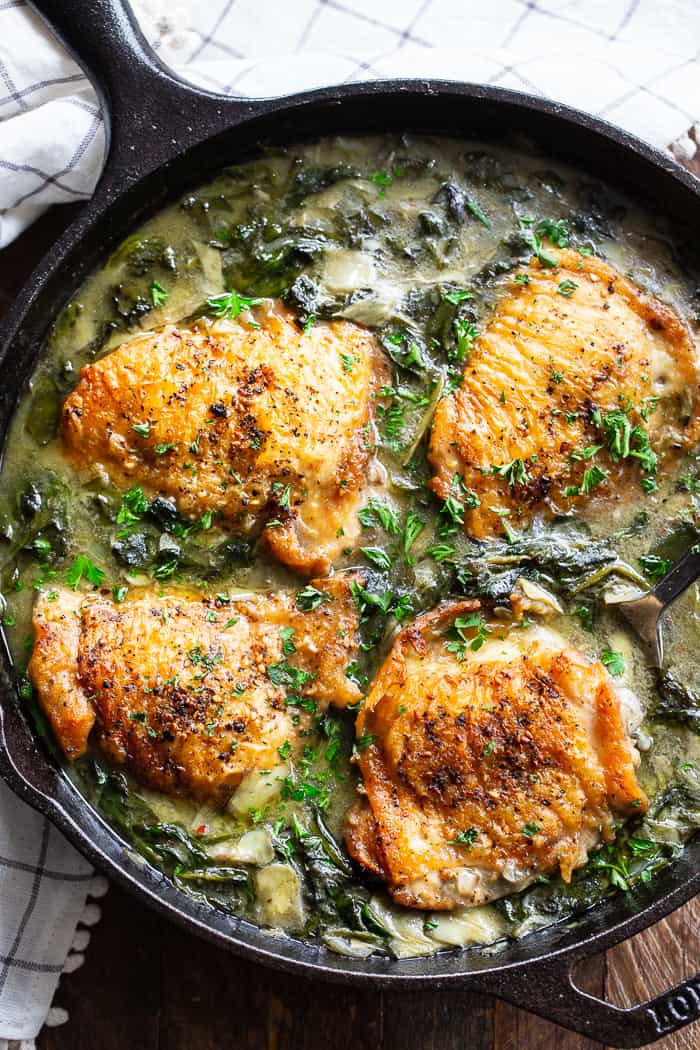 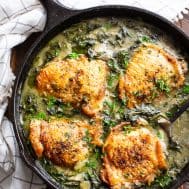 Print this Recipe
Did you make this recipe?
Leave a review
4.58 from 54 votes

*Every broth has different flavors/amounts of salt, so season after adding to avoid over-salting.

Want More Whole30 Chicken Recipes?  Try One of These!