This paleo veggie quiche is loaded with all the goodies!  Crispy bacon, sweet/savory caramelized onions, sautéed mushrooms and zucchini are baked with a creamy egg mixture in a grain free and paleo pie crust.  This quiche is sure to become a favorite for brunches and works as a make-ahead breakfast too! 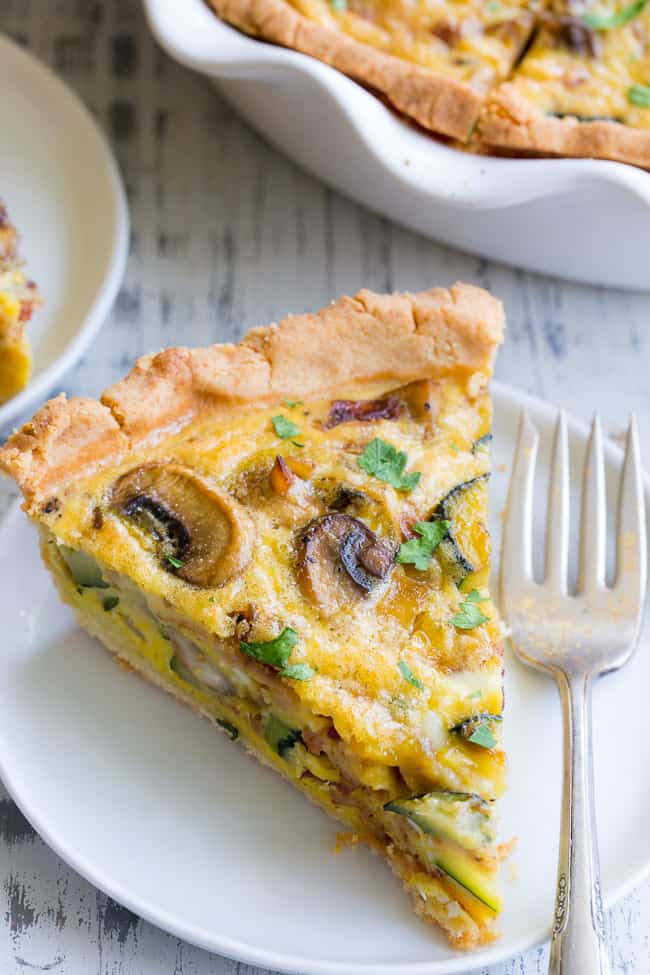 I’m always up for a good quiche, whether it’s for a fancy (well, relatively fancy) weekend brunch or a grab-and-go quick weekday breakfast.

I’m always trying to think of new flavor combinations but usually come back to two favorites – bacon and caramelized onions.  For those of you familiar with my recipes, you’ve probably seen these two ingredients pop up again and again from quiches and frittatas to stuffed squash.

I’ll probably never get over this heavenly combo and won’t ever apologize for it!  Bacon + caramelized onions = lifelong foodie romance.

For this particular quiche, I decided to pile all the goodness into a more traditional grain free and paleo pie crust, rather than using a sweet potato or butternut squash crust as I typically do.

This is the pie crust I’ve used for all my sweet pies as well as this broccoli and bacon quiche and savory tart.  It’s easy to make and you can press it right into the pie dish rather than rolling it out.

If you want to make this recipe Whole30 compliant, however, you can use a sweet potato crust as I did here with this sausage, leek and spinach quiche. 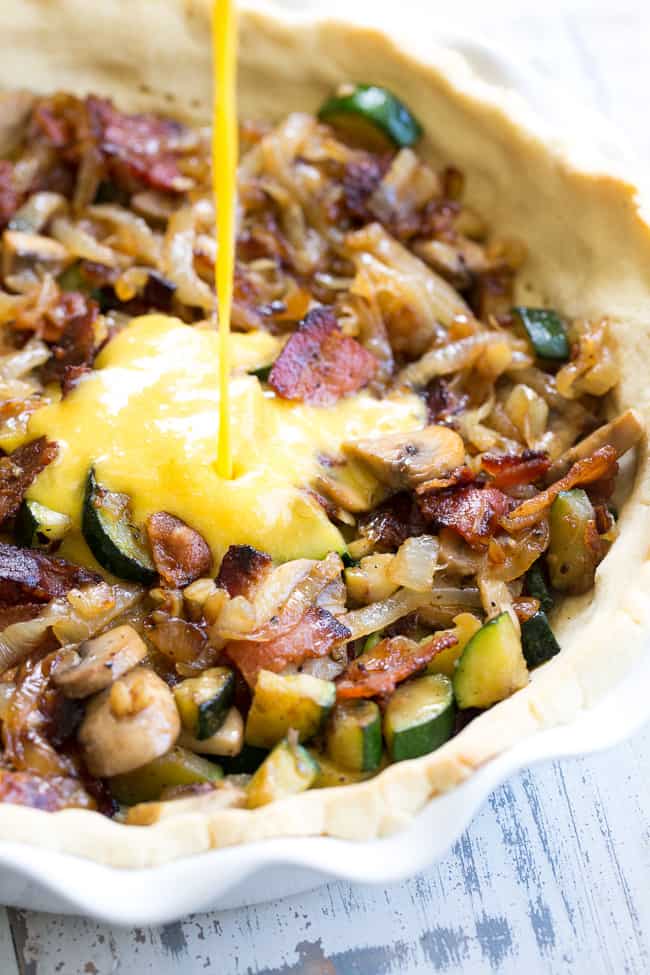 In addition to the onions and bacon, I loaded the quiche up with sautéed mushrooms and zucchini since those are two veggies I’ve been craving lately.

Sadly, I think I’m the only person in my house that like mushrooms.  I can’t get my head around this!  Any mushroom haters out there?

If you happen to be anti-mushroom like my family, you can totally replace the mushrooms with a preferred veggie.  Extra zucchini or yellow summer squash would be great, too. 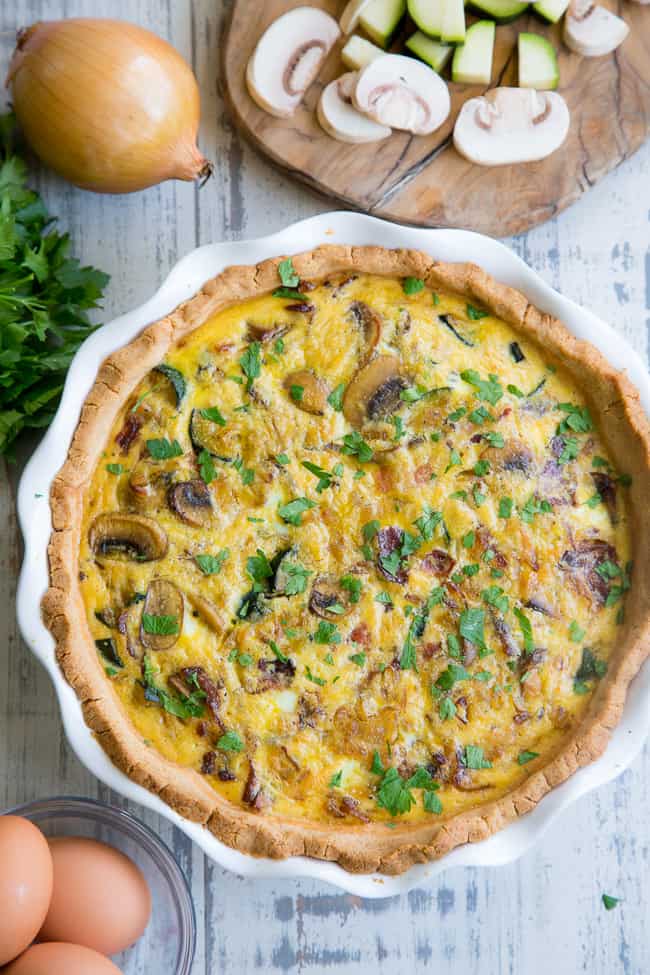 The egg  mixture I used was basically my go-to: pasture raised eggs whisked up with coconut milk (for extra creaminess – you don’t taste the coconut), nutritional yeast (for flavor), salt and seasonings.

Since we’re making this dairy free, I like to add the nutritional yeast for a slight “cheesy” flavor, however, it entirely optional.  The other ingredients add lots of flavor so you definitely won’t be missing cheese in this recipe! 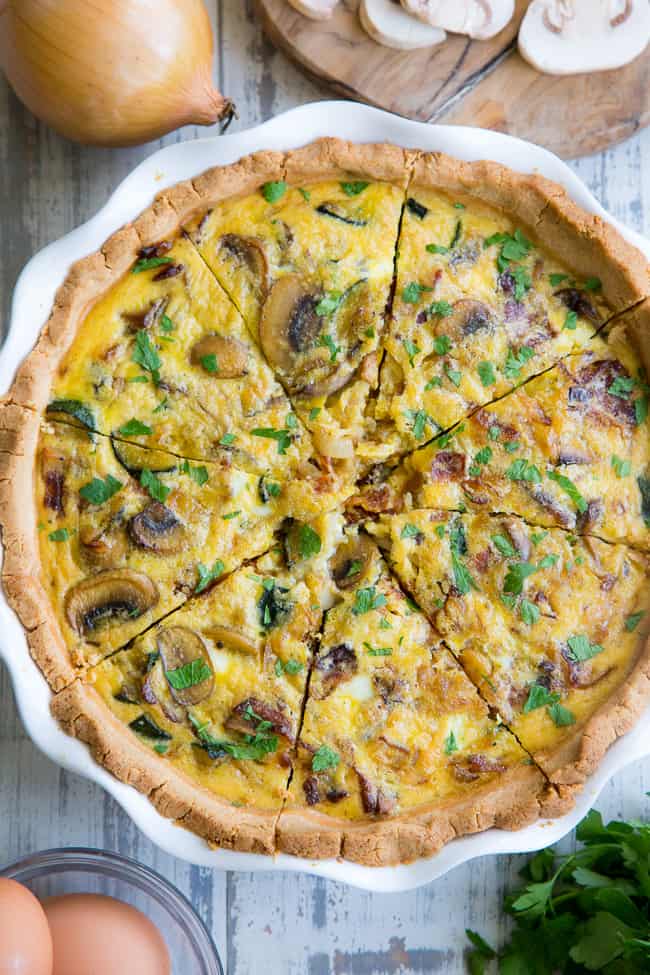 And now we’re all set – for your next brunch (Mother’s Day anyone?!) or Sunday meal prep.  I happened to have made this on a Tuesday and my 10 year old daughter was still happy eating leftovers on Friday!

She didn’t even mind the mushrooms, actually, now that I think of it 🙂

Let’s grab an apron (we’re frying bacon after all), get the oven preheated, and make this quiche happen ASAP!  Hope you all enjoy! 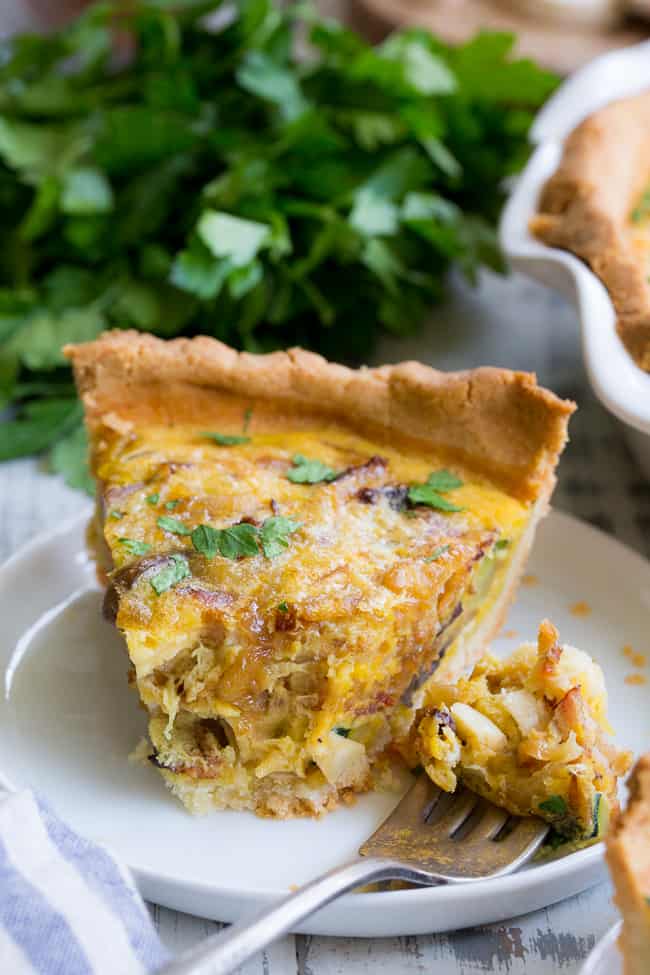 This paleo veggie quiche is loaded with all the goodies! Crispy bacon, sweet/savory caramelized onions, sautéed mushrooms and zucchini are baked with a creamy egg mixture in a grain free and paleo pie crust. This quiche is sure to become a favorite for brunches and works as a make-ahead breakfast too!

Print this Recipe
Did you make this recipe?
Leave a review
4.8 from 15 votes

*You can use a sweet potato crust as in this recipe to make this Whole30 compliant.

Want More Paleo Brunch Recipes?  Try One of These!