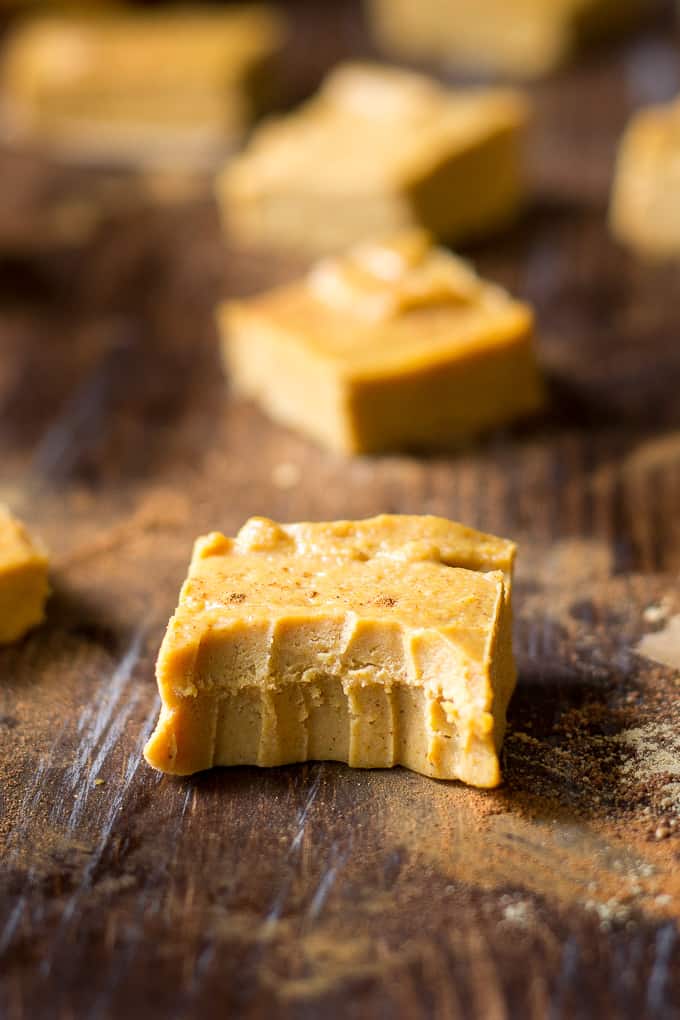 Truth – I made this Pumpkin Spice Fudge recipe back during the first week of August.  Yup, I think it was 95 degrees.  I had decided to gear up for fall by reshooting both my Honey Pumpkin Pie Muffins and Pumpkin Pie, and I had extra pumpkin left.

Literally, there is always some amount of canned pumpkin puree leftover.  No matter how perfectly you try to plan out recipe measurements versus purchased canned pumpkin puree, you will always have some leftover – this is a scientific fact.   A curious one, for sure.  And one that lends itself to pumpkin-spice-ifying everything in sight.

Anyway, so this is what happened to my leftover pumpkin.  Of course, because of the bizarre canned- pumpkin-leftover-phenomenon, I had to open up a new can to finish this recipe, and then of course had more leftovers.  So you see how The Cycle continues. 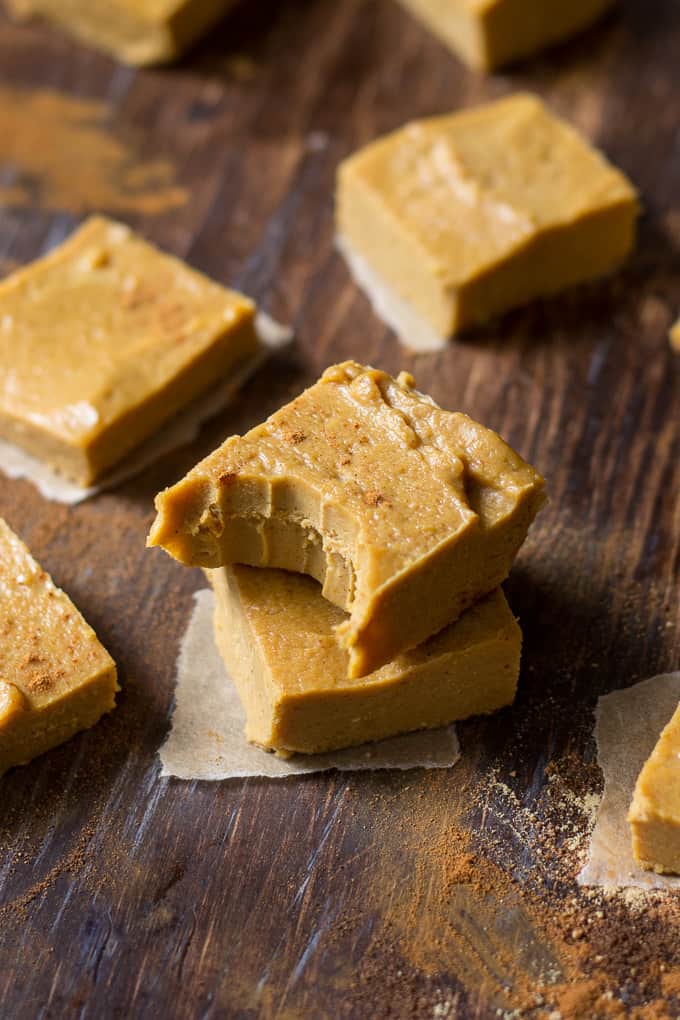 Pumpkin pie spice is typically made with the following ingredients:

I used what I had on hand for this Pumpkin Spice Fudge, so I didn’t add clove. If you prefer, you can add a pinch of ground cloves to the spice mixture. Cloves are super potent, so just be sure not to add too much ground clove, so that it doesn’t overpower the flavor of the fudge. 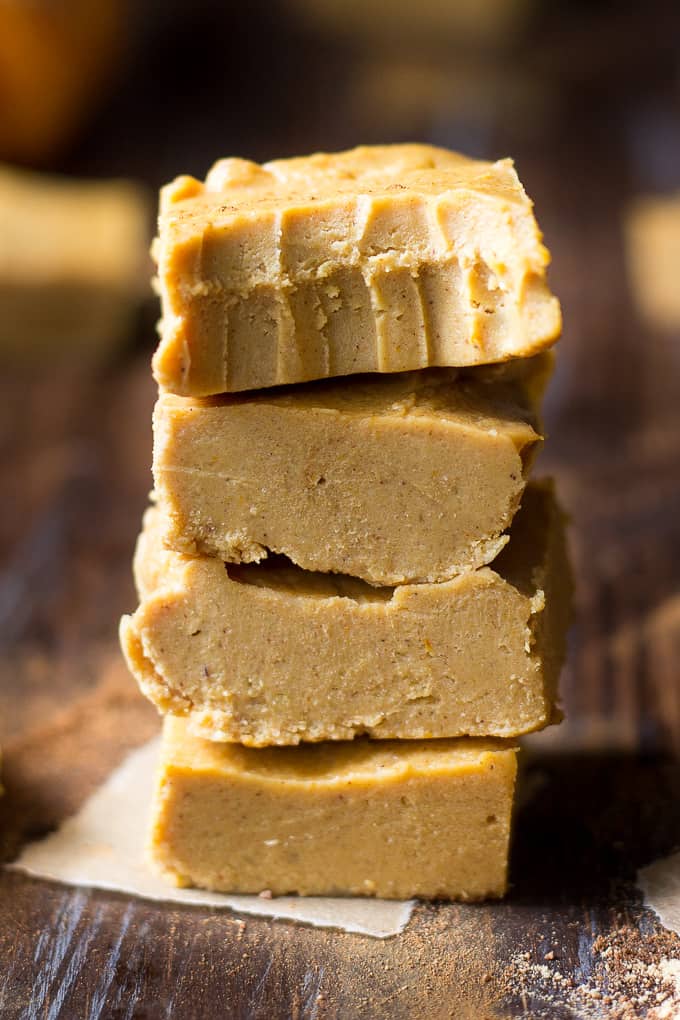 How to Make No Bake Fudge

It doesn’t take much work to make this fudge. The hardest part is waiting for it to set!

Step 1. Combine the wet ingredients in a large bowl. Use a whisk to make sure that everything is thoroughly mixed.

Step 2. Mix the spices together in another bowl and then add them to the wet ingredients, making sure that the spices are evenly distributed throughout the fudge mixture.

Step 3. Line an 8×8 baking dish with parchment paper and pour the fudge mixture into the pan.

Step 4. Cover and refrigerate the fudge for about 2 hours until it’s set. You can also freeze it for an hour if you’re feeling impatient!

Step 5. Cut the fudge into squares and enjoy! 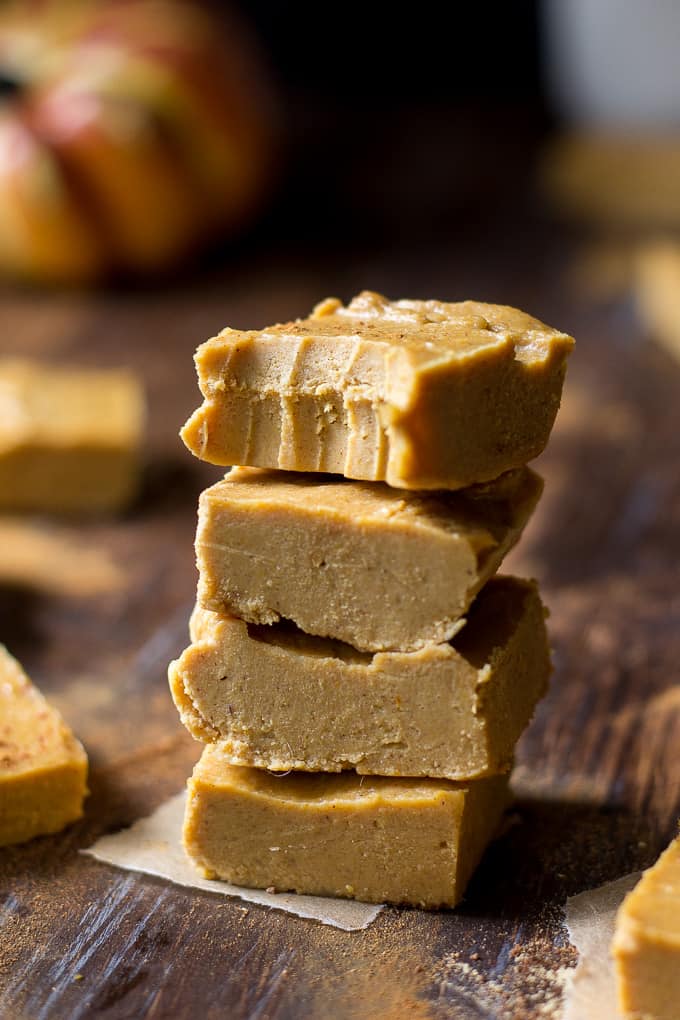 The best part about this Pumpkin Pie Spice Fudge? It’s healthy, people!  Just like many of my other no-bake fudge recipes, but with a slight alteration.

Here’s the deal – pumpkin can be tricky, and by tricky I mean FULL OF WATER.

-Instead of using less pumpkin (I wanted FULL ON pumpkin pie flavor) I added a bit of tapioca flour. Since it’s so fine, it firms up the fudge a bit – so you can store either in the fridge or freezer – but keeps the texture nice and creamy.

-Use creamy nut butter instead of crunchy. The smoother the better for this pumpkin spice fudge recipe. I used creamy cashew butter but you can also use almond butter or another creamy nut butter of your choice. 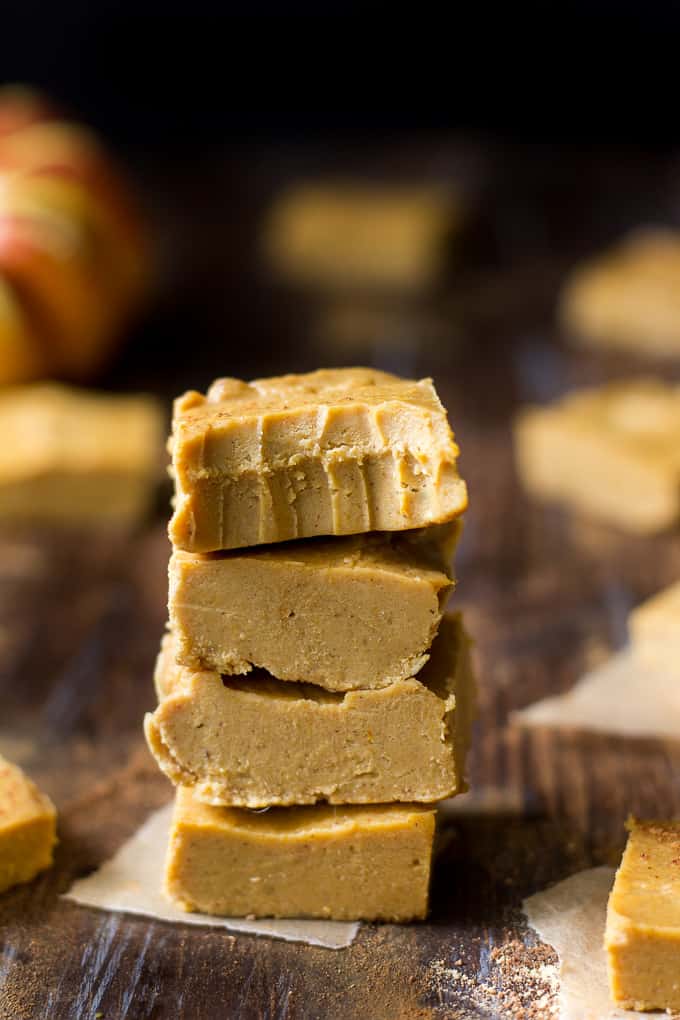 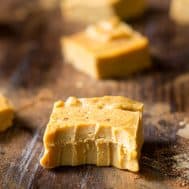 Print this Recipe
Did you make this recipe?
Leave a review
3 from 2 votes

*I used this brand of cashew butter which is nice and smooth and creamy. A creamy almond butter would work as well.
**Coconut oil might begin to separate if you overwork this mixture
***You can use a smaller baking dish or another shape, just don't go larger or the fudge will be too flat.

What I Used To Make My Pumpkin Spice Fudge:

Want more Paleo Pumpkin recipes for that leftover pumpkin?  Try one of these!

Paleo Pumpkin Desserts Around the Web:

Am I imagining the leftover pumpkin thing?  Am I losing my mind?

Have you made no-bake recipes with pumpkin?