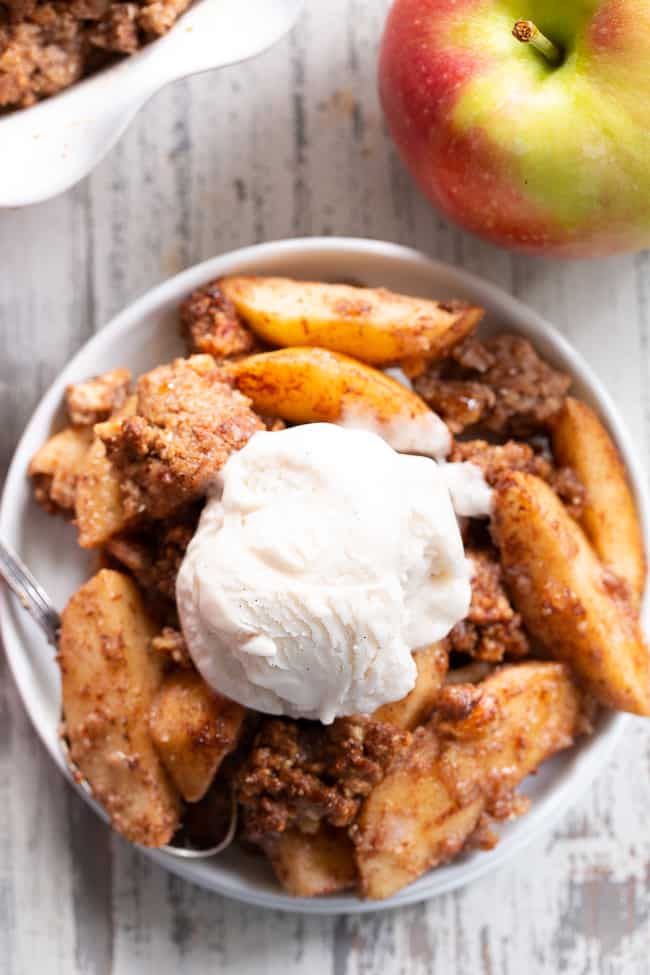 It’s a rainy day home with the kids.   No school today to observe the Jewish New Year, although we observe the holiday only by the way of food – Sweet Potato Noodle Kugel, lots of apples and honey, and then the above delicious creation!

They are begging me to take them to toys R us because we have a gift card and trashing the house as per any typical day.

What’s better – heading out to toys R us in the rain to engage in battle or not leaving the house at all until 3pm for gymnastics?

It all depends on what goes down in the next hour or so and also what’s on TV.  Yes, I’m letting them watch TV.  It could be worse, it’s just TV. 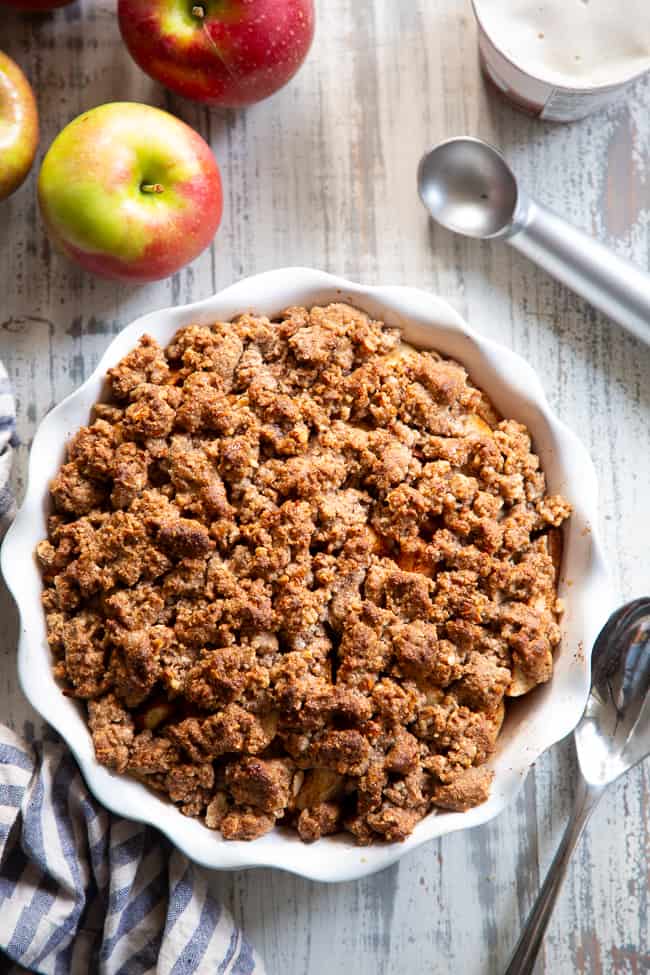 Back to the apple crisp.

I used to make non-paleo versions of apple crisp at least twice every fall.

In fact, the first thing Adam ever saw me cook was an apple crisp when we were dating for less than a month, and he was clearly impressed.

I can’t believe we were ever the couple hanging out in an apple orchard without kids.   And if you happen to know us I’m sure you can’t believe it either.

So, apple crisp was my original claim to fame with my husband.

The pressure was on with this one.  Dramatic, yes, but you all know how I feel about cooking heartbreak, so whenever I venture out of the sweet potato box there’s always that risk of getting hurt once again. 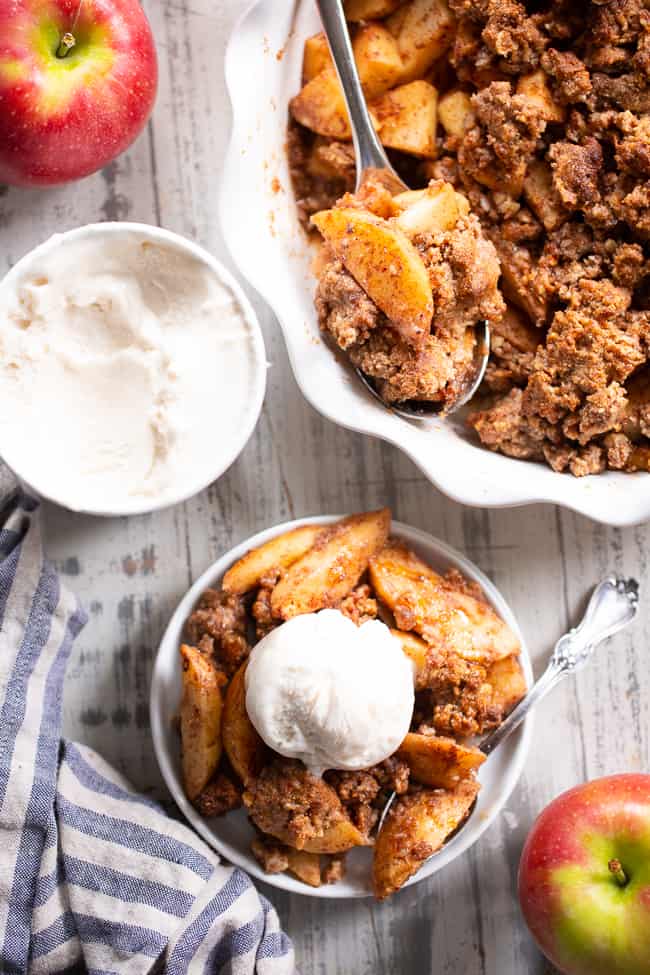 When I said no leftovers I wasn’t kidding – the 5 of us devoured this thing in under 15 minutes.

After my middle one (the picky) had 2 servings I told her she just ate nuts and coconut.  She was majorly confused and didn’t believe that was possible.

The topping has a taste more along the lines of granola than anything paleo, so the seeds were definitely planted for a future granola recipe! I’ve said before that I used to have a major cereal habit and granola was probably my favorite of all.

6 apples is the perfect amount for this Maple Pecan Apple Crisp. Make sure that you wash them well, then peel them, core them, and sliced into 1/4 inch thick pieces. 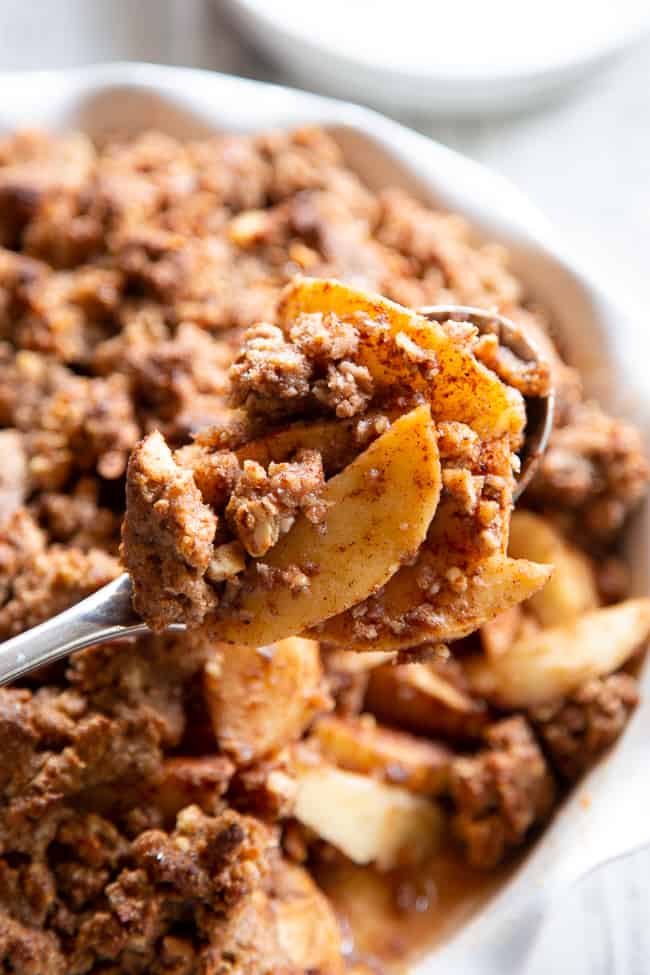 What type of apples should I use?

There are lots of great apple varieties that are perfect for baking and since they’re in season right now, they’re even more flavorful than ever! I used Pink Lady apples but you could also use Jonagold, Honeycrisp, or Braeburn for a delicious apple crisp.

First, you’ll make the filling. Place the apple slices, spices, and maple syrup in a large bowl and toss everything together. Place everything in a baking dish, then set that aside and make the crisp topping.

The crisp topping is so easy – just place all of the ingredients in a food processor and pulse or process until a crumbly paste forms.

Crumble the topping over the apples and bake at 350 for 45 minutes or until the the topping has browned and the apple filling is bubbling. 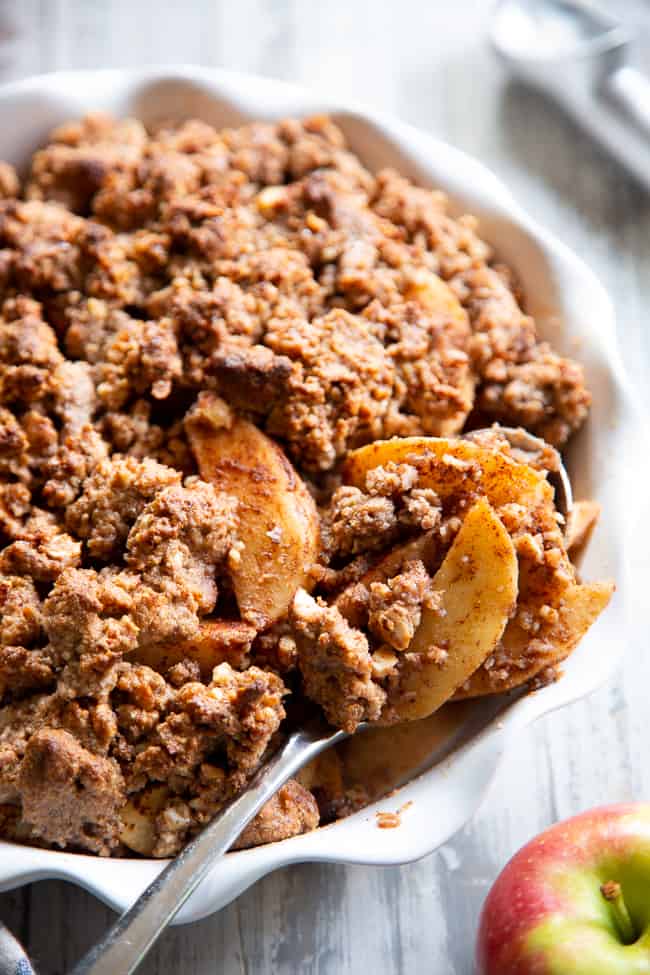 This Paleo Maple Pecan Apple Crisp has quickly become one of our favorite fall recipes. And that says a lot considering that it’s not even made with pumpkin!

In fact, I have a pumpkin sitting around that has my daughter questioning what I’ll make with it every day.

It’s so funny (and cool) that my kids see pumpkins and think about cooking with them.  I don’t think I knew you could cook with a pumpkin until last year.  Slight exaggeration, but not by much!

You’d better make this!  It’s the weekend and there’s no excuse!  Do it!

Sorry was that too pushy?  I meant to lead by example.  Always a challenge 🙂 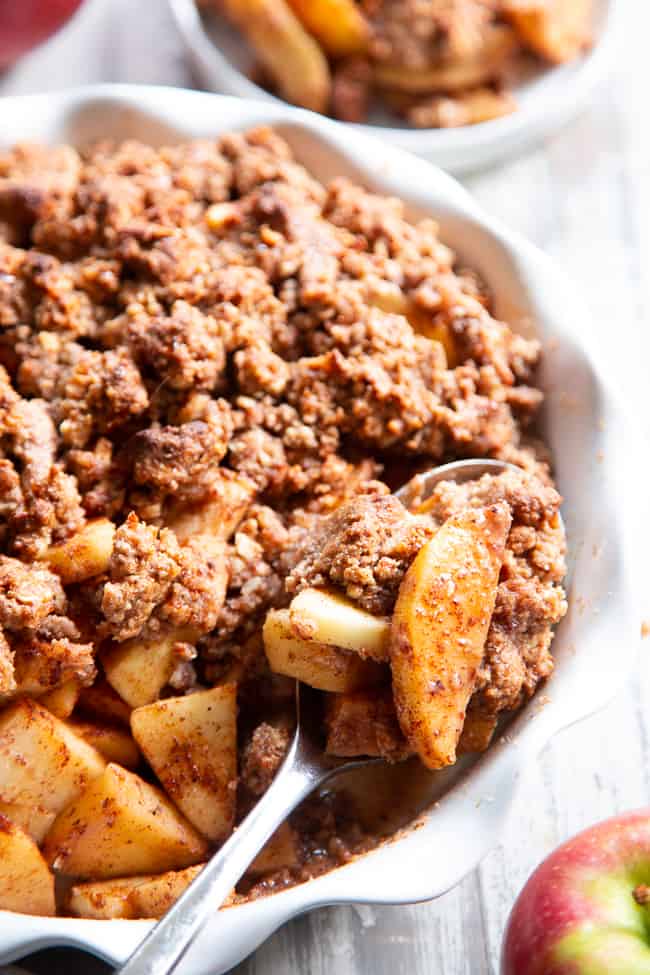 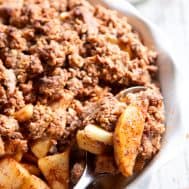 Print this Recipe
Did you make this recipe?
Leave a review
4.59 from 24 votes

Want More Paleo and Vegan Dessert Recipes?  Try one of these!

END_OF_DOCUMENT_TOKEN_TO_BE_REPLACED

Sign Me Up!
I made these Paleo Reese’s “peanut” butter e

When you’re craving cinnamon rolls but your ener

Breakfast cauliflower fried rice - one of the most

I always choose a good savory breakfast over sweet

Another easy dessert for you! These paleo and vega

I dove way back into my blog archives to roundup 1