These sweet and smoky BBQ chicken wings are made Whole30 compliant with an easy homemade BBQ sauce.  They’re baked to crispy perfection and brushed with lots of sauce for a super tasty appetizer or main course that you’ll be constantly craving! 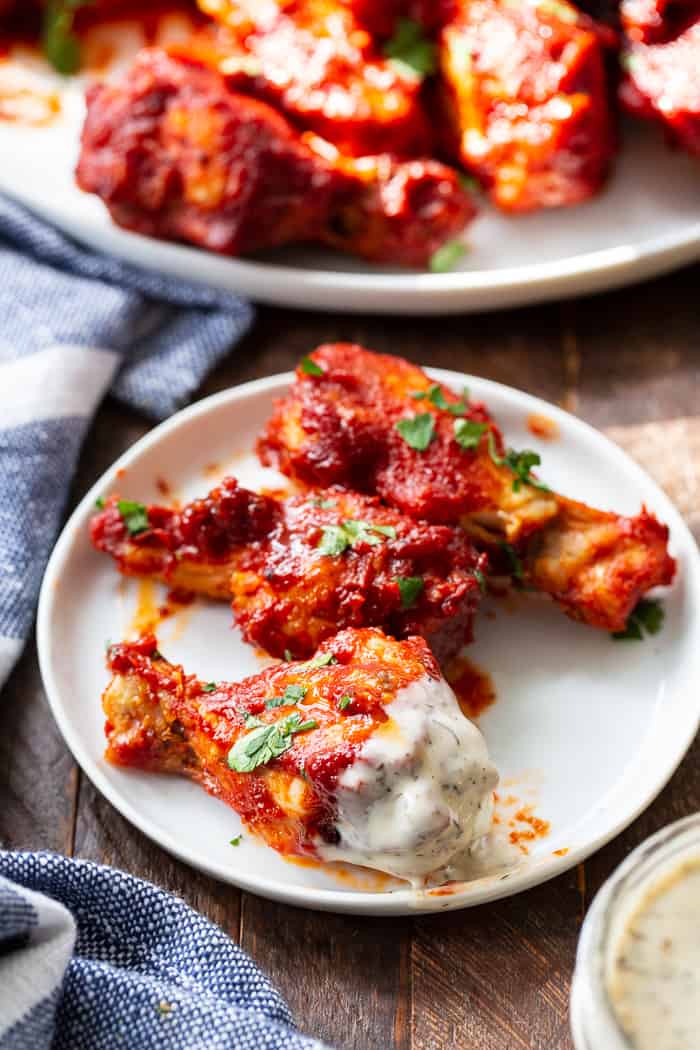 Wings are a family favorite around here, though I don’t make them enough.  It’s like a second Christmas when I do though, and my older daughter has even been known to sneak in a few for breakfast if they happen to be in the fridge.

Since so many of you went wild for my crispy baked buffalo wings (they are a major favorite on the blog!) I decided a BBQ version was in order before Superbowl rolls around.  These are every bit as tasty, and also Whole30 compliant – woohoo! 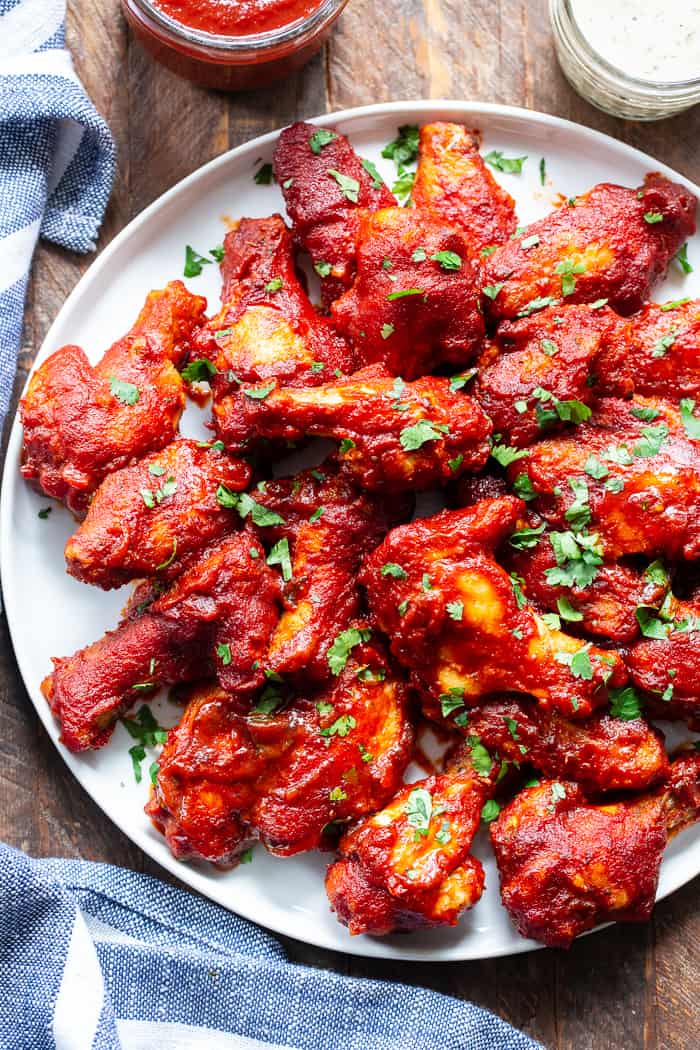 I used a similar method for the wings themselves – because I’m a firm believer in sticking with what works.  The sauce, however, is a new thing.  I’ve made BBQ sauces before, but, to be honest, none of them really wowed me the way I wanted them to.

I threw together a whole bunch of ingredients and cooked up something that tasted truer to actual BBQ sauce than any of my others.  And, you can feel confident that you’re eating clean, real food rather than a boat load of sugar and chemicals.  That always makes things taste a little bit better 🙂 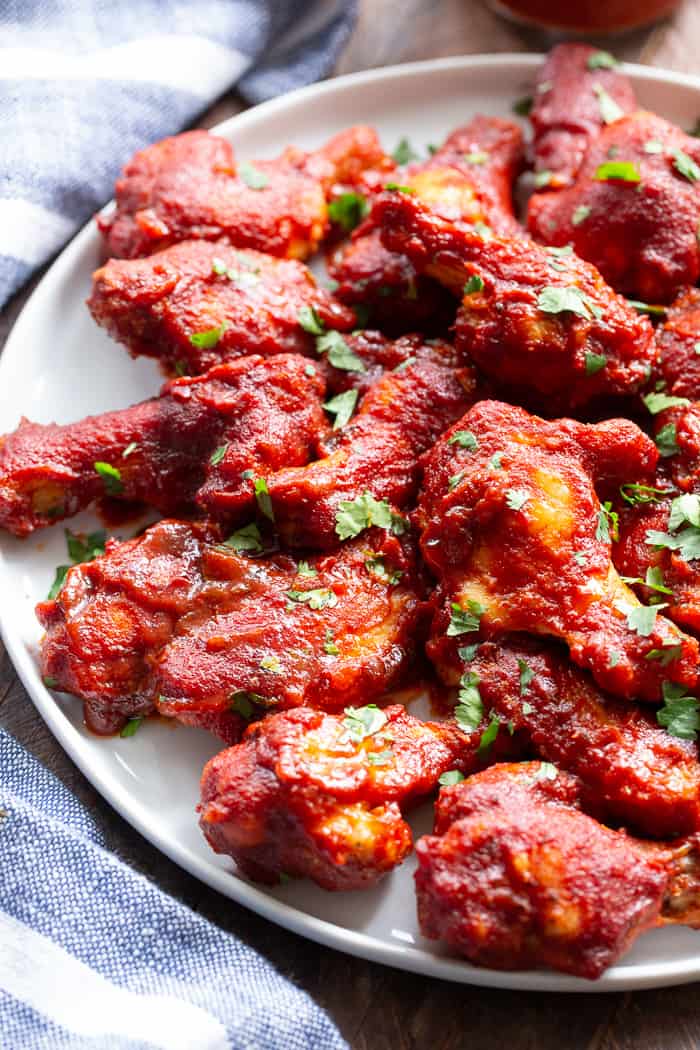 Of course, we DO need to sweeten the sauce – otherwise it’s just not BBQ sauce!  I used date paste for this, pre-made and then added as if it were another “liquid” sweetener.

It does make the sauce a bit thicker than other BBQ sauces, and if this bothers you, you can add more liquids (water, ACV) to thin it a little bit.

The wings bake up nice and crispy while you make the sauce, and then they’re dipped in the sauce and baked again.   Actually, dip as many times as you want to get these extra saucy – you should have plenty of sauce to do so!

You can serve them with extra BBQ sauce plus another dipping sauce like my paleo and Whole30 ranch dip.

I like my ranch with basically anything so I AM a bit partial here, but, I think it’s delicious this way.  But really, is anyone really against BBQ ranch?!  I hope not!

Alright, grab those ingredients! It’s GO TIME and we’re about to make saucy BBQ chicken wings that will rock your Paleo and Whole30 world to the core.  I’m only half joking, these wings are dang good guys – hope you enjoy! 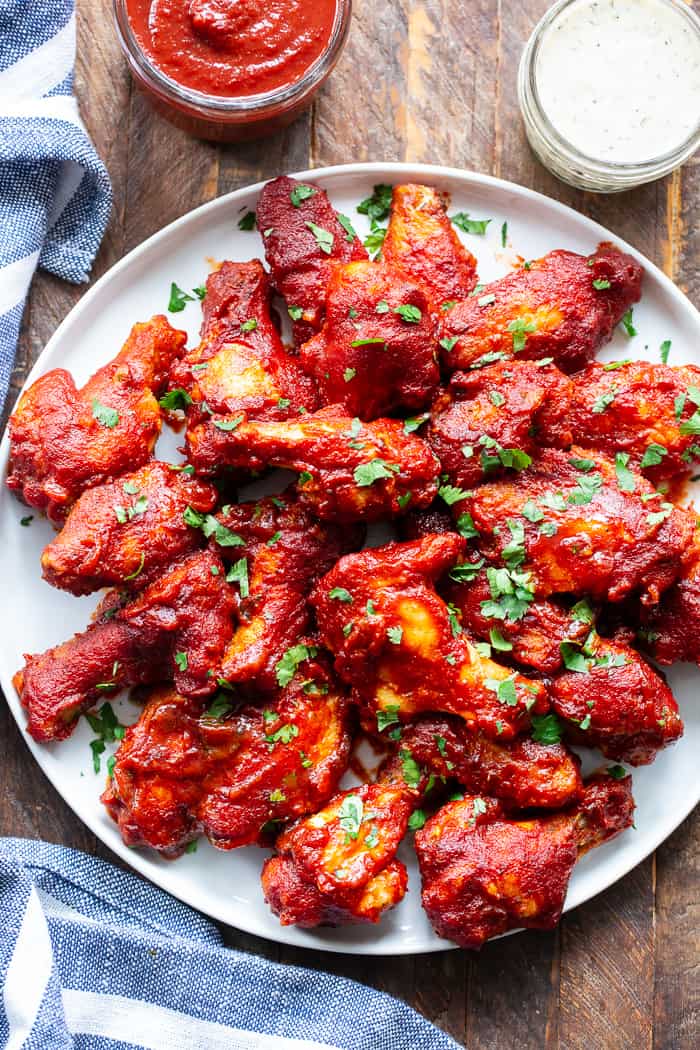 These sweet and smoky BBQ chicken wings are made Whole30 compliant with an easy homemade BBQ sauce. They’re baked to crispy perfection and brushed with lots of sauce for a super tasty appetizer or main course that you’ll be constantly craving!
Author: Michele Rosen
Servings: 12 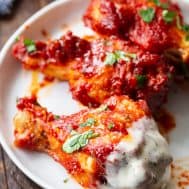 *To make date paste, place 1 cup pitted medjool dates in 1/2-3/4 cup very hot water and allow to soak a few minutes. Place mixture in a blender (a smaller one works better, or you can use a small food processor) and blend until very smooth. You will need 1/3 cup for this recipe, save the rest in the refrigerator for other uses.