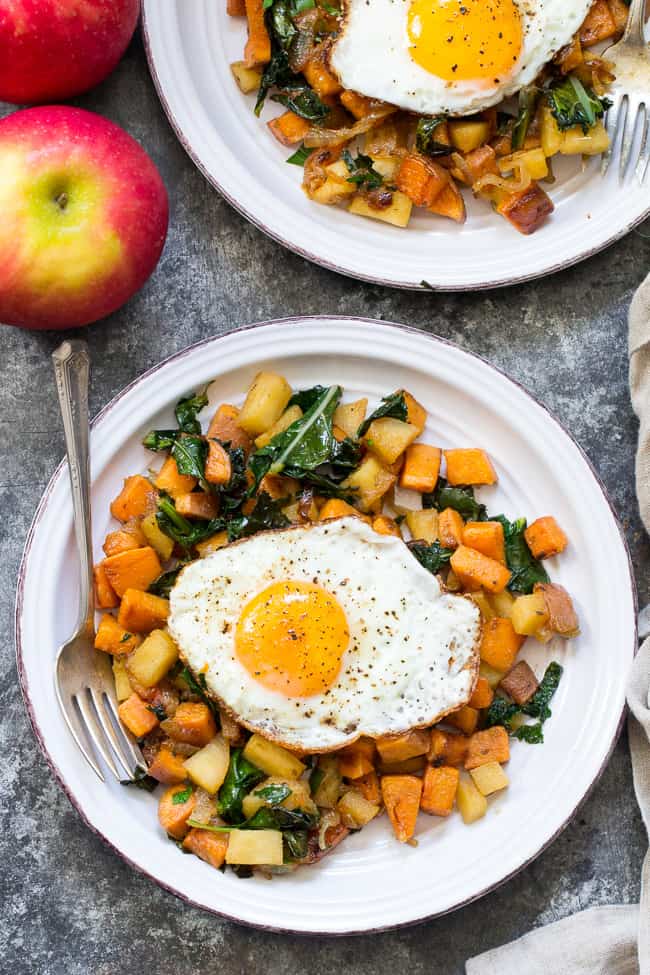 I made a one-skillet sweet potato hash without meat!

That’s why I feel like this is best described as a side dish rather than a breakfast hash, despite the eggs you see above. I’m telling you though, either way, you can’t go wrong – I’ve added a few of my favorite semi-forbidden ingredients (I call them “forbidden” only due to the FODMAPs) and created the perfectly simple and delicious meat-free breakfast hash that I’ve made thus far.

Yes! As you can see in the photos, I served this healthy sweet potato hash with an egg on top. Which makes it a perfect vegetarian meal.

But you can definitely omit the eggs if you want to make this hash completely vegan, because all of the ingredients are completely free of animal products. 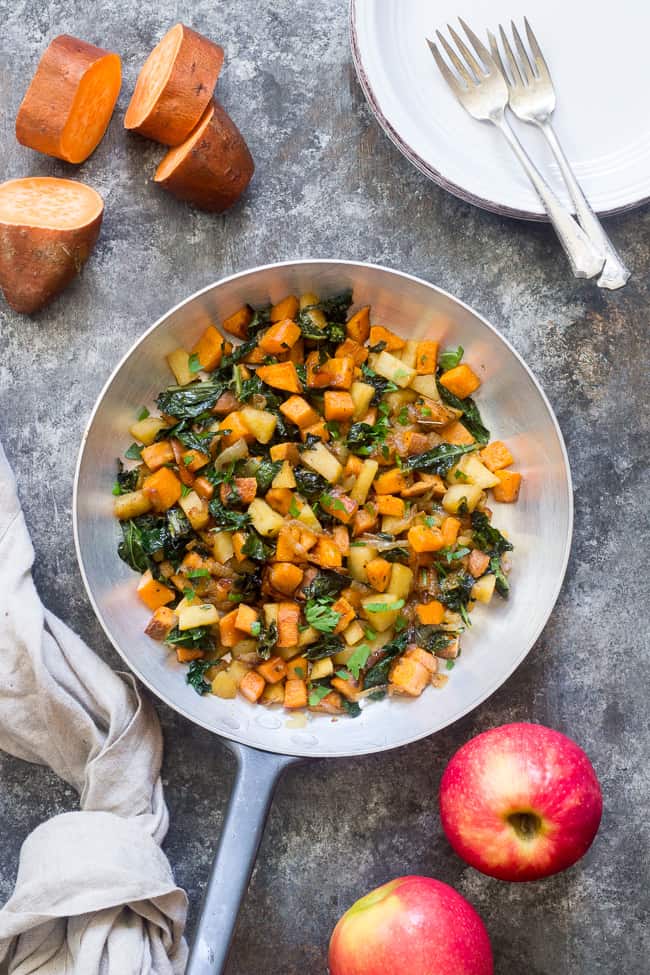 This much is true for a meat eater – when I leave the meat out of a recipe that I’d typically put bacon in (or something) I need to add a little life to it.  And that, my bestest internet friends, is why you’ll see not just apples in this recipe, but caramelized onions, AKA the bacon of the produce section in my opinion.  If that makes any sense, I think at least partially it does 🙂

Anyway, I went with caramelized onions, because I’m aware at this point that I’m not the only one who is obsessed with how good they are.  Plus, something about cooking onions that way does seem to make them a lot easier on my system.  I’m not sure I understand the chemistry behind it, but I’m not questioning – I’m just happy I can eat caramelized onions without a problem.

How to Caramelize Onions

Step 1: Peel your onion and cut it into quarters. Chop off the root ends, then slice the onion into thin slivers.

Step 2: Add your cooking fat of choice to the bottom of a heavy-duty skillet and allow it to melt.

Step 3: Add your onions to the pan and coat them with the cooking fat. Cook until they are translucent and sprinkle them with salt. This step is important – it brings out the water content and allows the onions caramelize.

Step 4: Cook the onions, stirring occasionally, until they have softened and turned a medium brown color. Reduce the heat if necessary so that they don’t burn, but keep it to at least medium so that they cook to a deep brown caramel color.

Then the caramelized onions are ready to use! 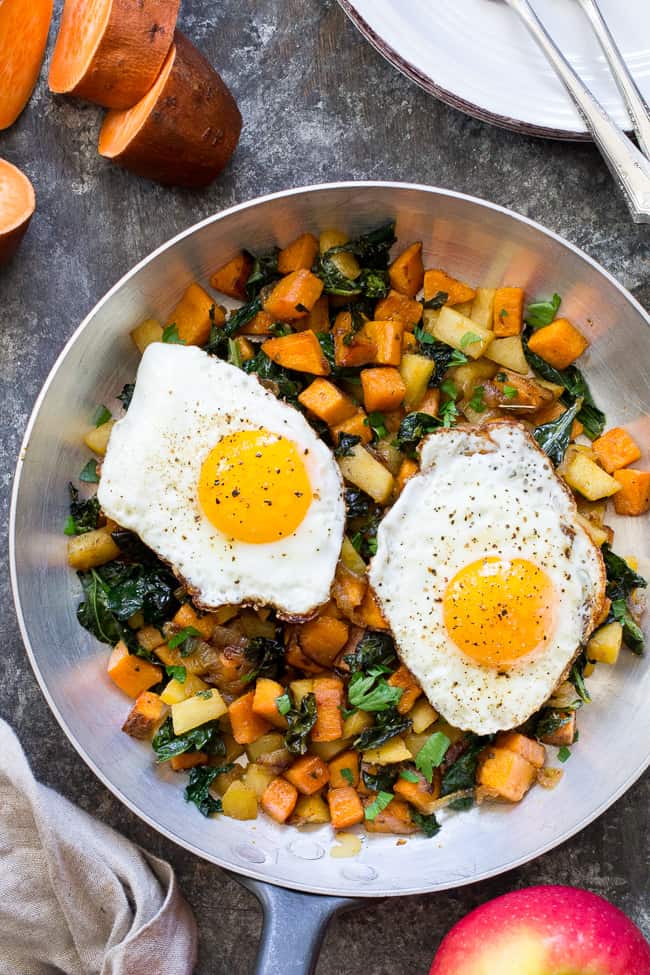 This recipe is very simple and easy!

-First, you’ll cook the sweet potatoes along with the onions while they caramelize.

-Next, you’ll add the chopped apples and a little extra coconut oil, then cover the pan to allow the sweet potatoes and apples to cook and soften.

-Finally, add the kale and water to the pan, and cook everything until the hash is browned and the kale is wilted. That’s it!

Aside from caramelized onions, I can’t deny that kale is my favorite green veggie to put in a breakfast hash.  I know a lot of people aren’t truly huge kale fans, and the only thing I can say to them is TRY MY KALE RECIPES!  You will come to like and appreciate kale in a new way, I promise.

Other ways to use kale:

I would also say to simply try roasting kale into chips with salt and pepper, but that would be too easy by itself.  So, maybe try kale two ways – made into chips, and in a hash – either this one or as in any of my other breakfast recipes!  Hint – it goes really well with bacon!  (FYI those 3 links go to various kale recipes that I can’t get enough of!) 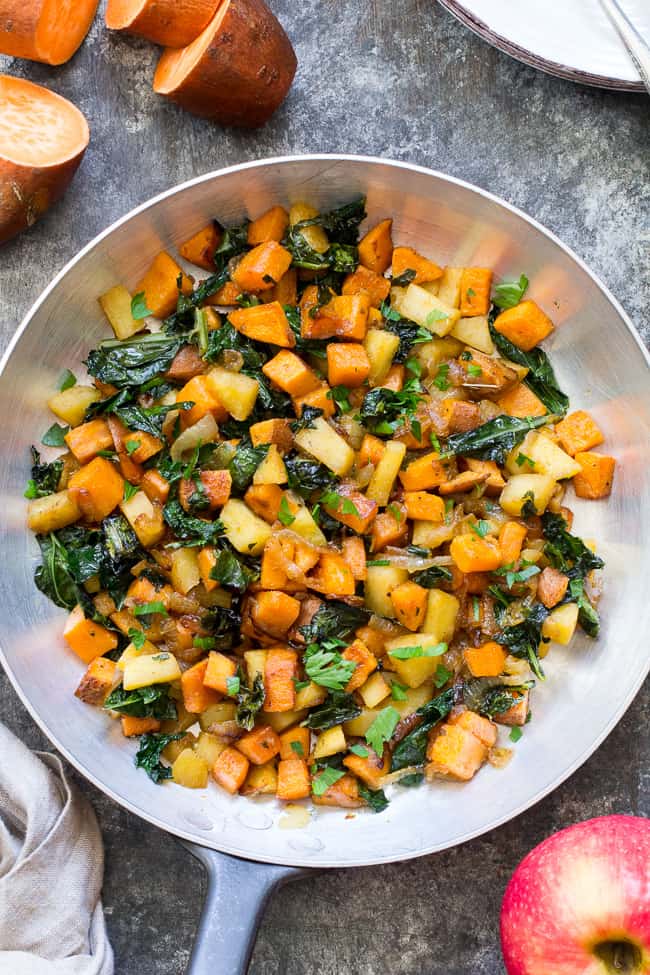 How to Serve Hash

This one skillet sweet potato apple hash is versatile!

As a side dish: Serve it on its own alongside just about any meat.

As a main entree: Add an egg on top or serve it with a side salad and you have a hearty meal that is perfect for breakfast, brunch, or any time!

So, besides the lack of meat, the caramelized onions, apples and classic sweet potatoes, what is is that makes this recipe amazing?!  Well, let’s see – it’s Paleo, vegetarian (vegan without the eggs!) Whole30 friendly, and you can make it all in one skillet with no fuss.  Yes!  We need more one skillet recipes in this world, I think 🙂 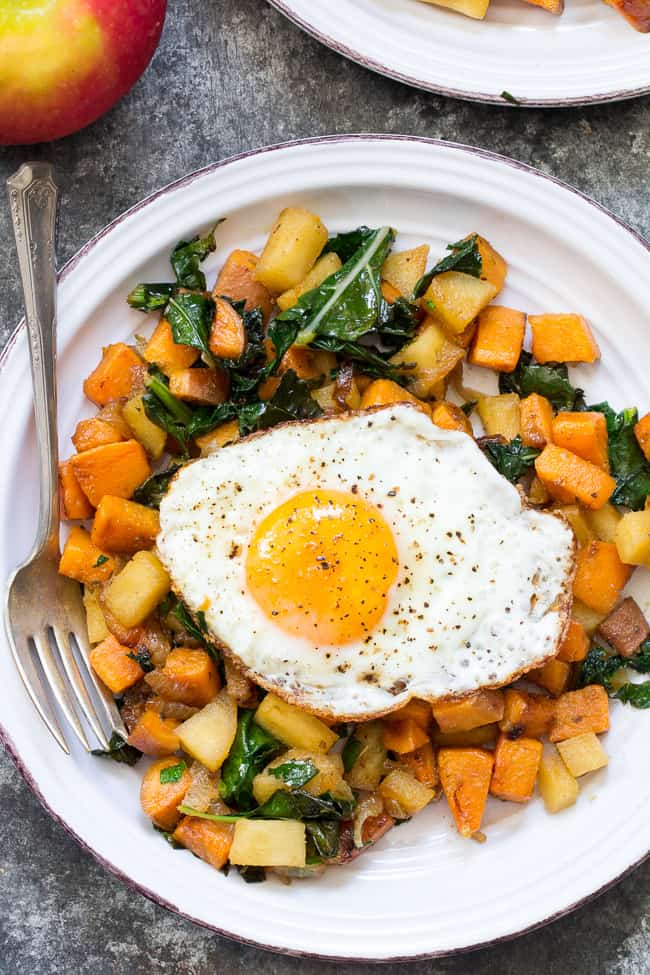 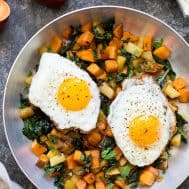 *Make sure the onions are sliced in uniform size so they cook evenly.

Are you a fan of kale?  Have I asked you this 10 times already?

What is your “bacon of the produce section”?

Do you mix apples into savory recipes or prefer them sweet all the way?