Roasted pumpkin seeds are just too good to have to choose one flavor!  These Simple Roasted Pumpkin seeds are given either a savory ranch kick or a sweet cinnamon spice flavor.  Both ways are incredibly delicious, kid friendly, healthy, and addicting!

This week I’ve been thinking about foods that taste like other foods.  Anyone else out there use their time to think about things like this?  I don’t have to try, believe me, being this super smart comes naturally to me.

My two bright conclusions while eating stuff with week were: 1 – roasted beets taste like sweet corn.  Seriously, I don’t know if it’s my slow cooker or the fact that I don’t really eat corn, but I recon the flavor is identical.  Which means we should be able to do corn stuff with beets, right?  See, told you I was smart.

Number 2 is something you might have already known: roasted pumpkin seeds taste just like popcorn.  Yup, you counted right – that’s TWICE this week that I could’ve sworn I was eating corn but wasn’t.

The second one at least was verified by my kids who actually eat popcorn on occasion, so I know it’s true.  Roasted pumpkin seeds, in my opinion are BETTER than popcorn thought with their fun-to-chew and oddly addicting texture/flavor combination, and have just as many potential flavor varieties as popcorn. 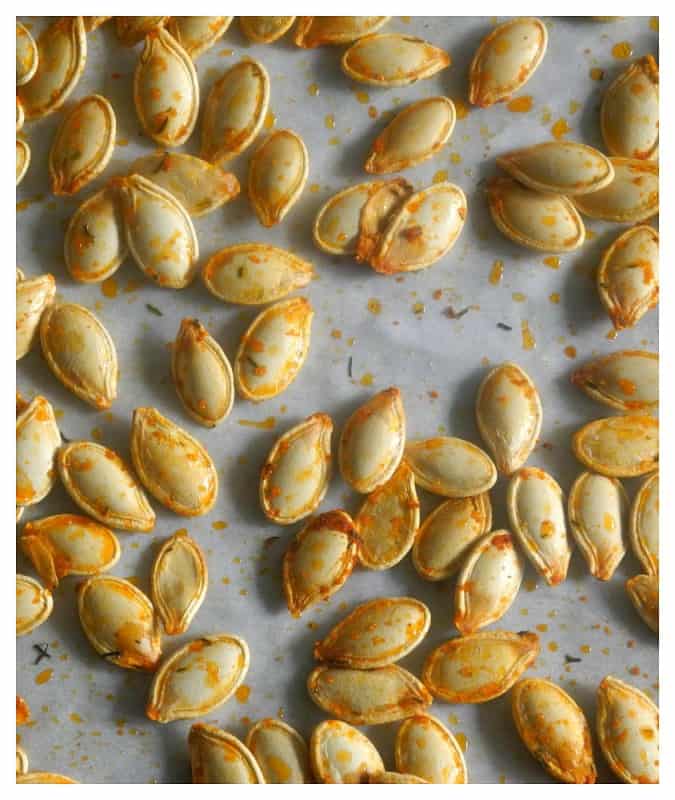 Anyway, I decided to make these on a whim after rescuing the nearly-sacrificed   pumpkin seeds left over when Adam carved pumpkins with the kids last weekend.  The dirty work had already been done for me so it was only right to turn these magical little seeds into what Drew actually referred to as “chips.”  The boy has eaten real chips and therefore knows of what he speaks!

Chip-like, popcorn-like, or whatever you want them to be, I think we’d all agree roasted pumpkin seeds are delicious and don’t need much at all to bring out that great flavor and crunch.  That said, it’s also really easy to flavor them however you want with your favorite spices and a bit of sea salt and sugar.  YOU choose your own pumpkin seed destiny and be the master of your pumpkin seed domain.  It’s really that easy!

But, in case you thought I was going to leave you hanging with that (of course not!) I’ll show and tell you what I did to flavor mine.  Both ways were good, and even the “sweet” version was not too sweet at all.  Again, you’re in charge.  If I had to pick a favorite for myself, I’d go with the ranch.  Diana said they tasted like “burritos” (she meant Doritos.) I agree that without any cheese at all they still had that “cool ranch” flavor 🙂 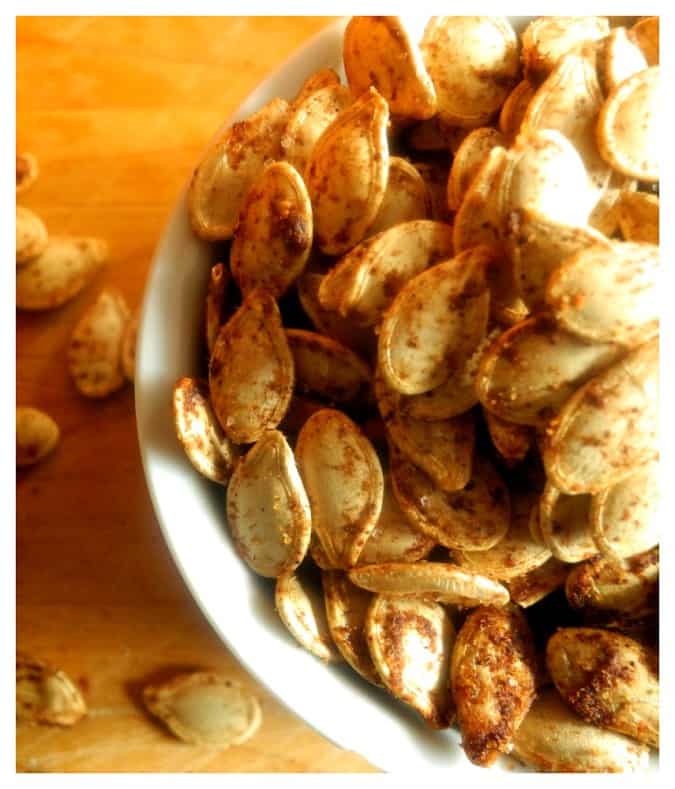 Roasted pumpkin seeds are just too good to have to choose one flavor! These Simple Roasted Pumpkin seeds are given either a savory ranch kick or a sweet cinnamon spice flavor. Both ways are incredibly delicious, kid friendly, healthy, and addicting!
Author: Michele Rosen
Course: Snack
Cuisine: Paleo &amp, Vegan 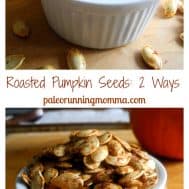 *For Both Versions, start out with 1 cup each of rinsed, drained, and dried fresh pumpkin seeds.

For the Sweet Cinnamon/Pumpkin Spice Version

For the Sweet Spiced Version 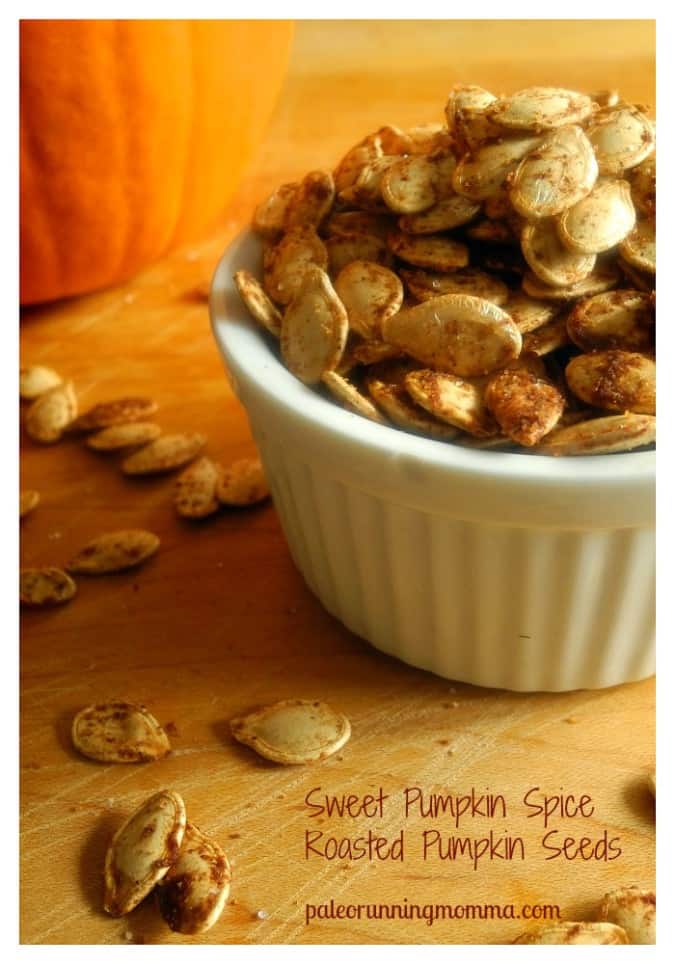 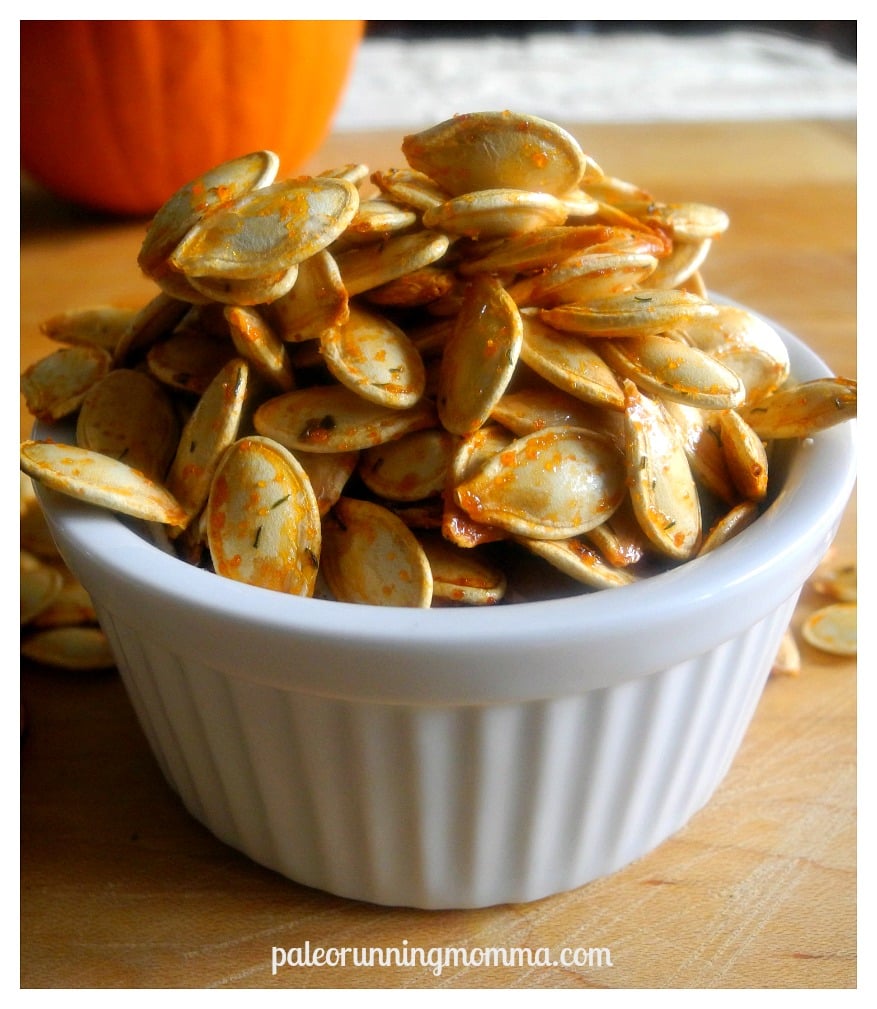 Is it possible that I made it to the end of this post without a mention of Halloween OR the NYC Marathon?  Sorry, I could not resist!  The marathon part, not the Halloween part.

I already told my kids that my trick or treating will be limited (luckily for me it’s Saturday and Adam can help!) since I don’t want to injure myself chasing them down the streets for two hours.  I am also not going to even THINK about touching a piece of candy until after the marathon.  Then, I might just have to indulge in a starburst, Hershey’s, or whatever else is gluten free and worth it.  Yes, I DO have a thing for pink Starbursts, guilty as charged !  Actually, I just love anything pink, edible or not 🙂

What’s one food that you think tastes just like another?

What about favorite chocolate candy?

Have a great weekend!  See you Monday with race-day pictures (assuming I survive!) and follow me on Instagram for updates this Sunday!