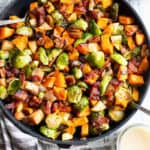 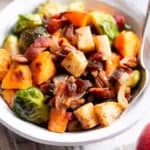 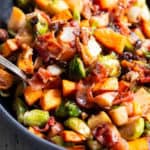 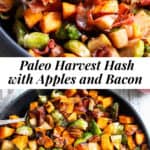 This harvest hash is everything you’re craving for the fall season, or anytime!  It’s loaded with roasted veggies, apples, bacon, pecans and raisins for a sweet, savory and healthy dish!  The apple vinaigrette add the perfect final touch!  Paleo, Whole30 compliant and great for any meal or as a holiday side dish! 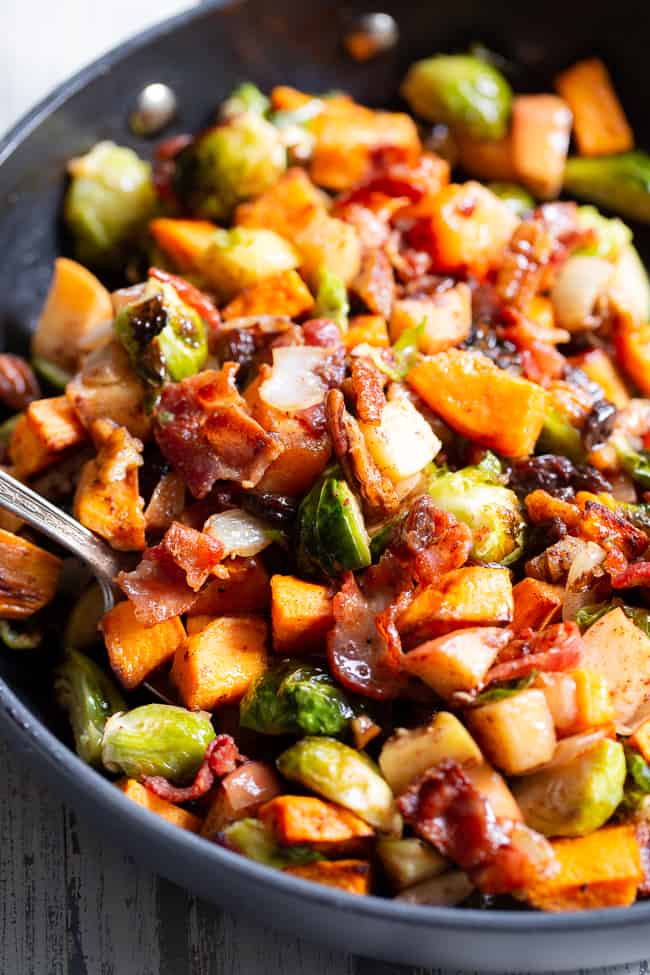 There are some days I recipe test and know exactly what my plan is.  Sometimes it might be a pumpkin snickerdoodle skillet cookie with salted caramel (so specific!) or a Whole30 chicken pot pie.

On those days, I often feel pressured to get the “correct” outcome based on the exact vision I have.

But, on the day I made this harvest sweet potato bacon hash, none of that was going on.  My only goals were 1.) create a new hash 2.) put a dressing on it!

Because I wasn’t playing by any rules, the outcome has a whole lot going on.   From brussels sprouts to bacon to raisins, it’s almost like a seasonal “kitchen sink” hash! 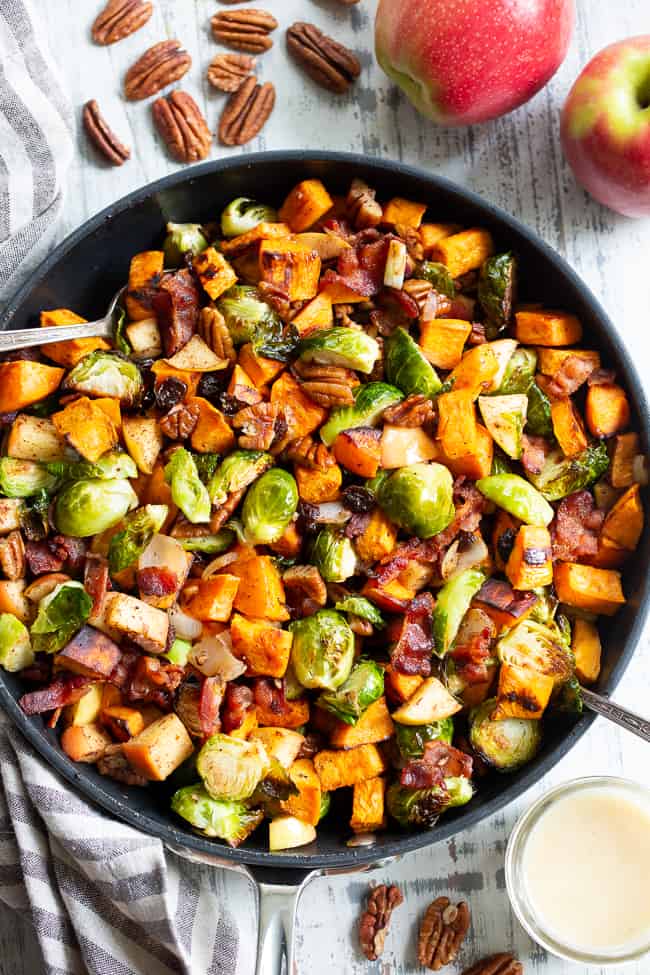 What You Need to Make this Harvest Sweet Potato Hash

Since there really is a lot going on here, you can’t make this one in a single skillet.  Even still, it’s very simple to throw together!

The vinaigrette is just as harvest-y as the hash itself.  It’s super simple and with an immersion blender, it becomes slightly thickened and glazes over the hash ingredients perfectly.

Here’s everything you’ll need to make the hash: 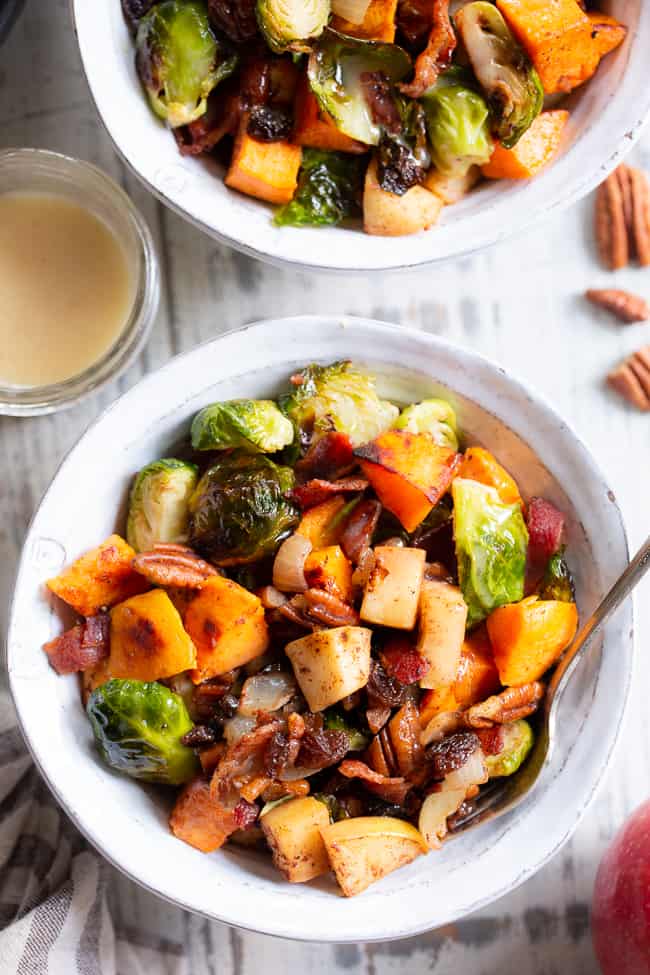 How to Make This Harvest Hash

Preheat your oven to 425° and line a baking sheet with parchment paper.  Toss the veggies in oil and sprinkle with salt.  Spread out on the baking sheet and roast for 25 minutes or until soft and toasty.

Meanwhile, heat a skillet over medium high heat.  Cook bacon until crisp, drain, and reserve 1-2 tbsp fat in the skillet.

Lower heat to medium and add onions, cook until soft, then add the apples and pecans and continue to cook, stirring occasionally, until toasty.

Sprinkle with the cinnamon and sea salt & pepper to taste, stir.  Add in the raisins, crumble in the bacon and cook another 15-30 seconds to heat through.

Toss with the roasted brussels sprouts and sweet potatoes.  Serve drizzled with vinaigrette. 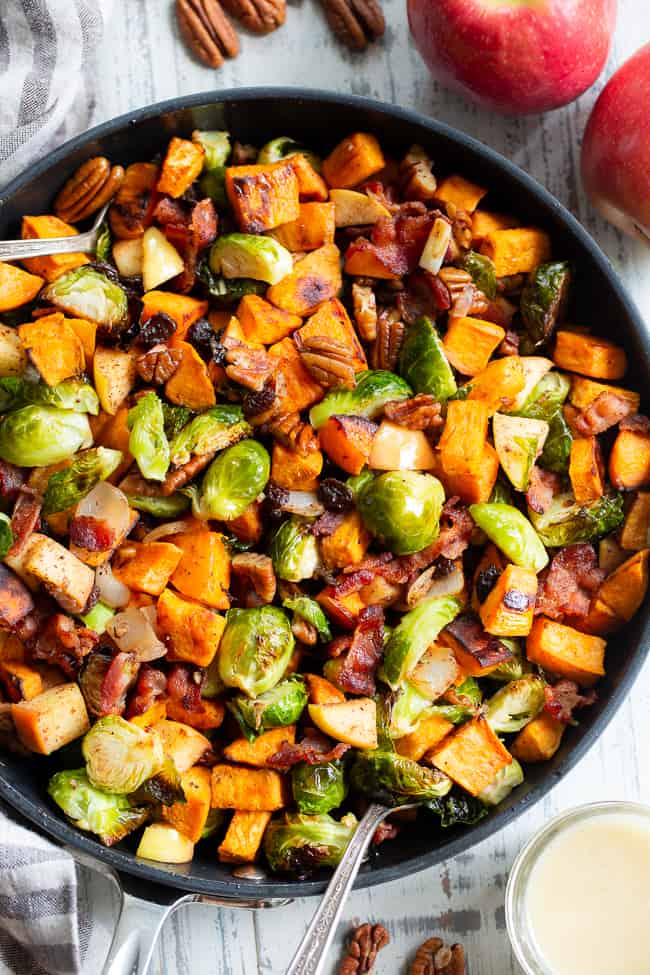 Since this recipe is Whole30 compliant, I used a small amount of date paste to sweeten it beyond what the apple juice gives it.

You can also use a store bought date syrup or grab this one on Amazon!

If you don’t need the recipe to be Whole30 compatible, you can sub in maple syrup or honey for the date paste. 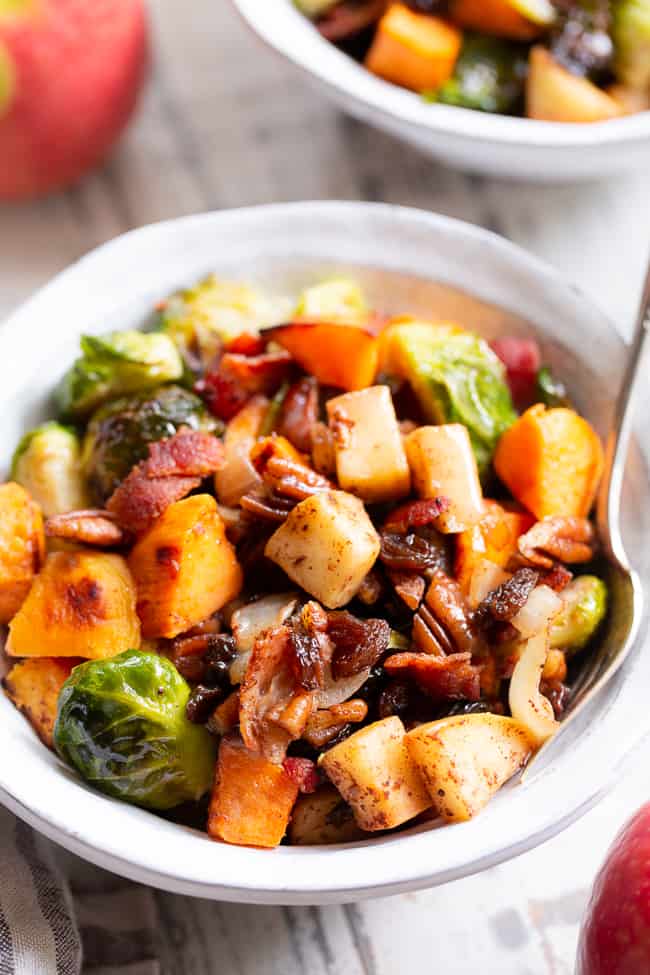 This is one of those recipes that I could eat all day every day.

You can serve this hash as a side dish (holidays!) or as a meal.  It’s just as good for dinner as it is for breakfast and the leftovers reheat well!

I know you guys are ready to cook this hash!  Grab an apron (bacon splatters) and start chopping those veggies.  Let’s go! 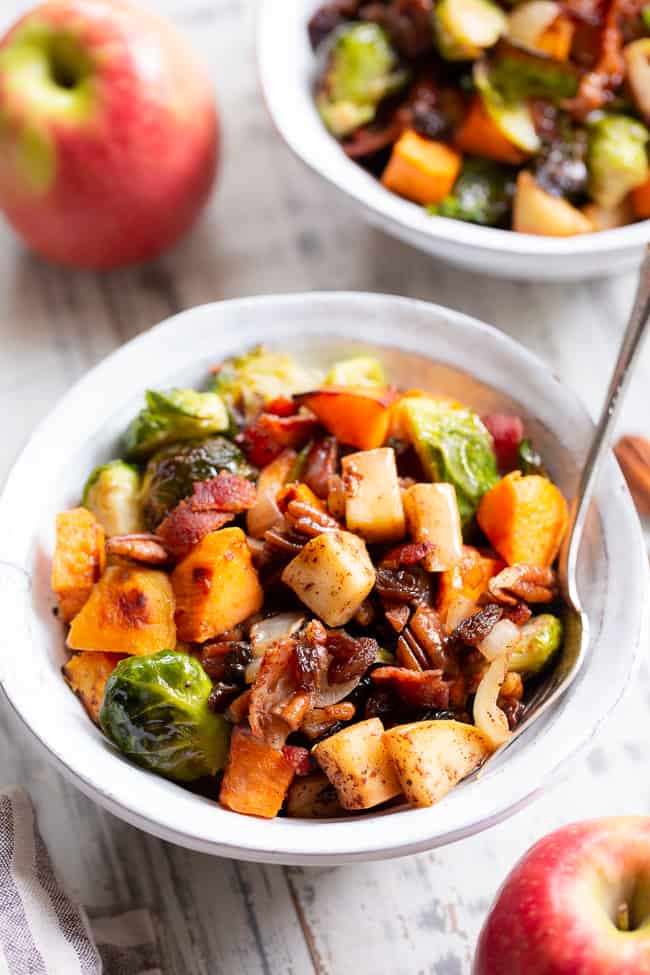 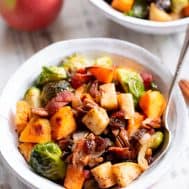 Print this Recipe
Did you make this recipe?
Leave a review
4.68 from 28 votes

*Use this recipe to make your own date paste

Want More Fall/Thanksgiving Recipes?  Try One of These!