This classic cinnamon coffee cake has it all – a deliciously light, sweet, moist cake topped with loads of cinnamon crumbs and even an optional cinnamon icing!  It’s paleo, gluten-free, dairy-free, kid approved and perfect for brunches, snacks and dessert. 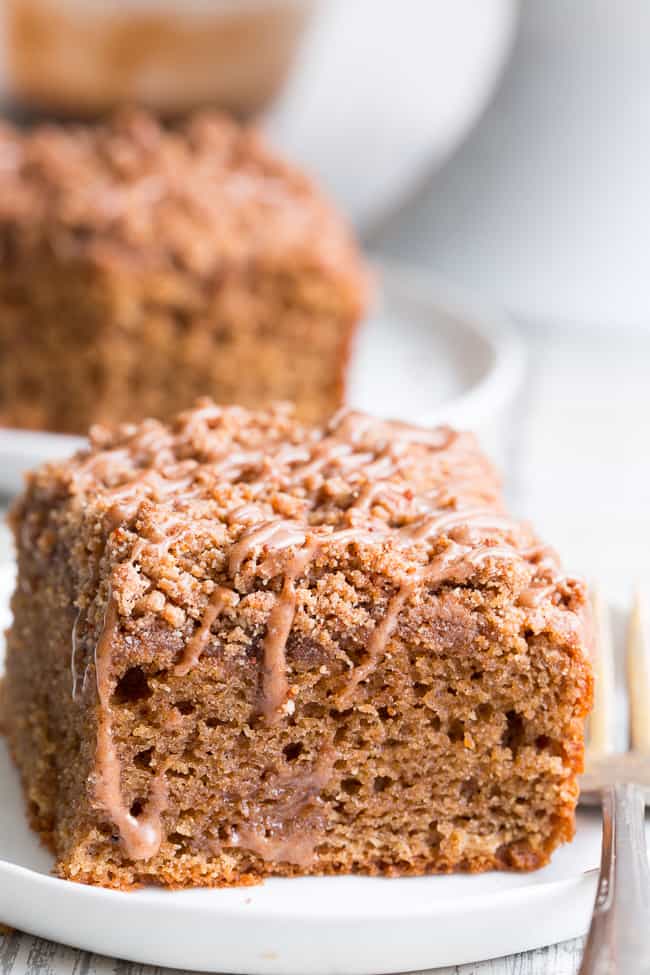 I think it was last weekend that I realized I didn’t have a good old cinnamon coffee cake recipe on the blog.  How is that possible?!   After all, it’s no secret I’m a big fan of a good crumb topping!

I think my issue is that I tend to reject the basic when it comes to baking – so trying out a cranberry orange coffee cake, caramel apple, orange gingerbread coffee cake or lemon crumb cake with lemon curd seems more appealing than a cinnamon coffee cake.

Ridiculous of me to reject a classic cinnamon coffee cake, since it might just be one of my favorite things in the world.  Thanks to those darling Entenmann’s coffee cake muffins from my childhood 🙂 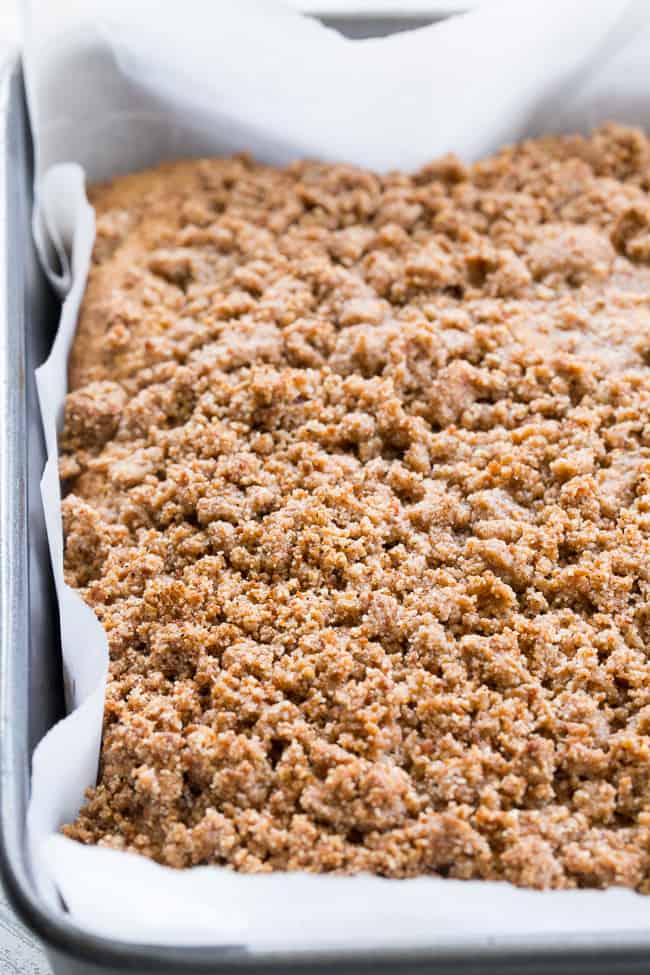 Now I would say the cinnamon crumb topping of any coffee cake is what makes it special – hands down.

However, that doesn’t mean that I don’t pay attention to the “cake” part too – in fact – for all my coffee cakes, the cake-part is really spectacular, as in, unsuspecting family members wouldn’t guess they’re eating a gluten free (let alone paleo) cake.

The texture is light yet moist, and the flavor has a slight nuttiness to it thanks to the almond flour.  You don’t taste the coconut flavors AT ALL – especially if you use an organic refined coconut oil as I do. 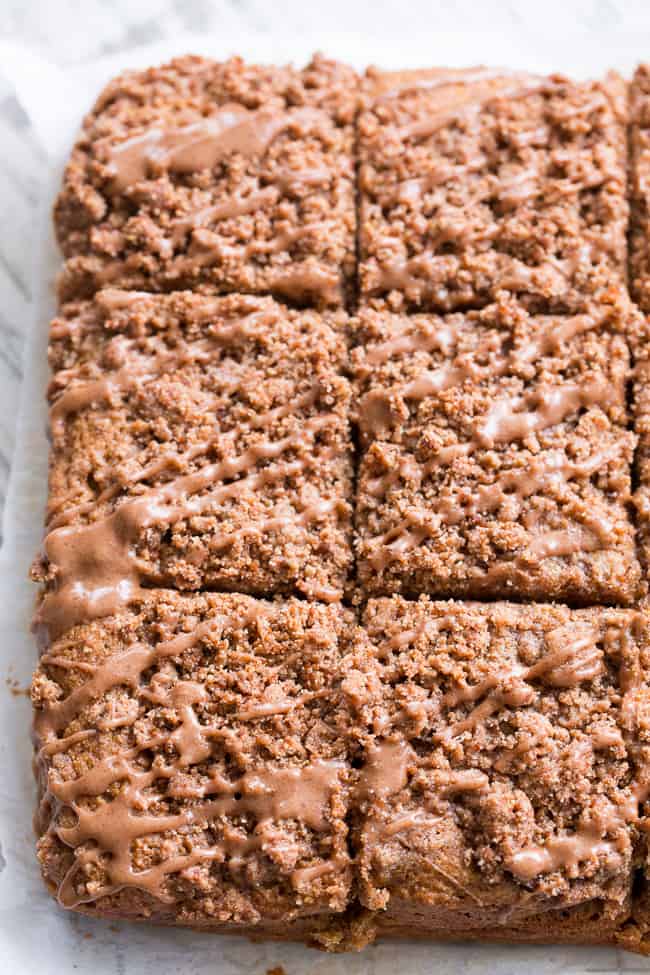 I only say this now because many people believe that coconut milk, sugar, and oil will make their baked goods taste like coconut – and it simply doesn’t work this way, luckily!

Now of course if you use A TON of coconut products without involving other flavors, you’ll get a coconutty result 🙂

However you’d be surprised to know that it’s pretty tough to make things taste like coconut – trust me – I sometimes try, on-purpose, and don’t get enough of a coconut flavor.  So, rest assured that this coffee cake won’t taste like coconut.

It does however, taste like cinnamon – but I guess that’s probably why you’re here to begin with. 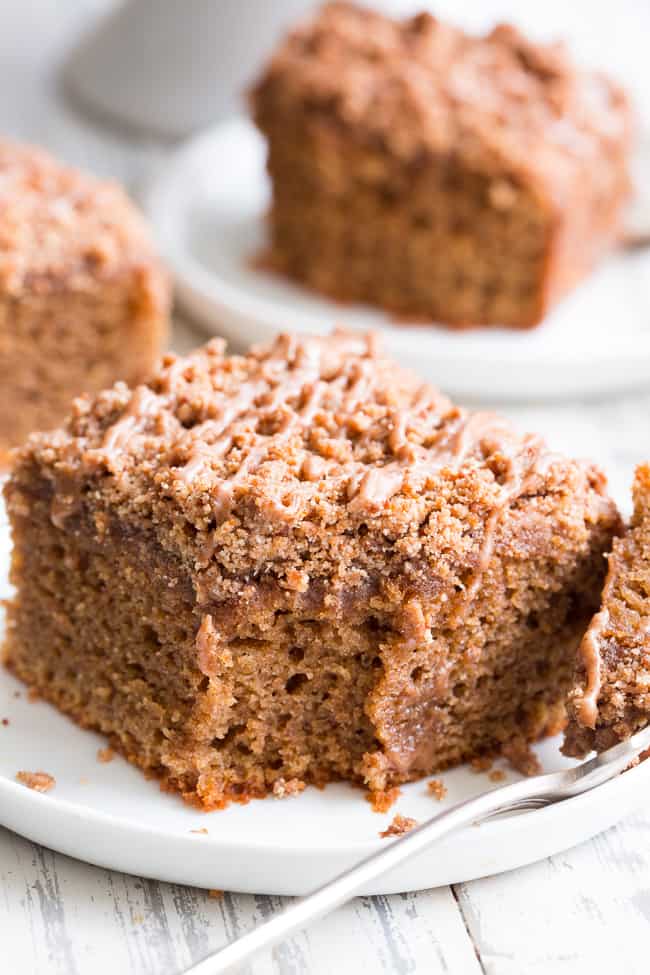 Lastly, I’ll mention the icing.  It’s totally optional, but if you want something a bit more special I highly recommend it!

I made my own paleo powdered sugar for this one with maple sugar + arrowroot using my food processor – which is surprisingly easy and works with either a food processor or blender.

Once you have a nice powdery consistency, you simply mix it with coconut milk, cinnamon, and vanilla for a nice drippy classic icing!

Of course, if you’re not all about making your own powdered sugar, store bought organic powdered sugar will also work.  I just wanted to give you a fun paleo-friendly icing option if you’re up for it!

I think we’re ready to get going – get that oven preheated and let’s bake! 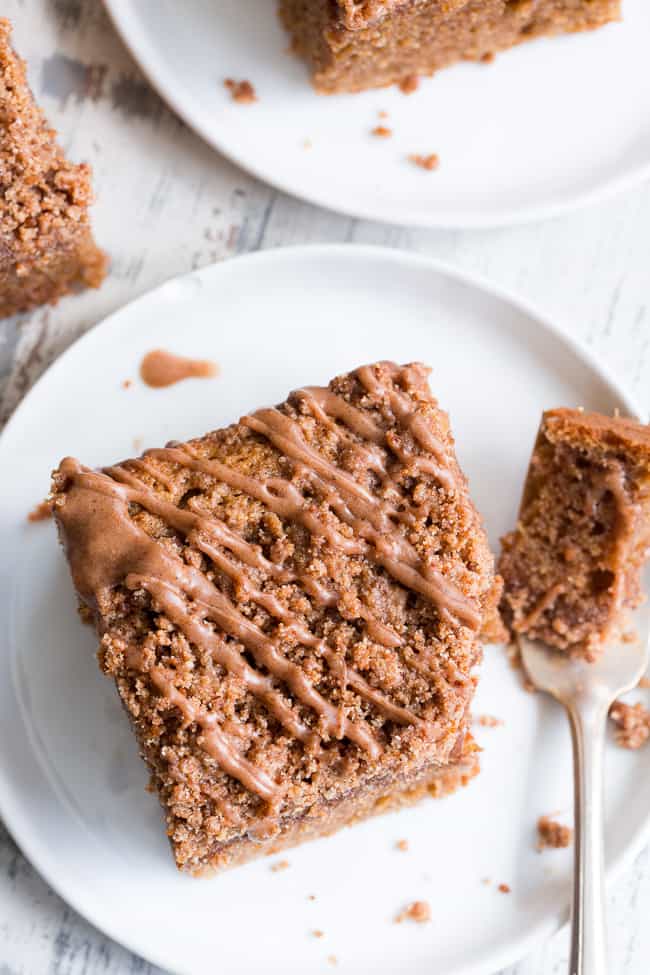 This classic cinnamon coffee cake has it all - a deliciously light, sweet, moist cake topped with loads of cinnamon crumbs and even an optional cinnamon icing!  It's paleo, gluten-free, dairy-free, kid approved and perfect for brunches, snacks and dessert. 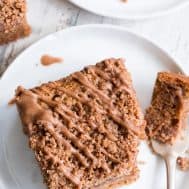 Print this Recipe
Did you make this recipe?
Leave a review
4.63 from 82 votes

*If you don’t want to make your own powdered sugar, you can use 1/3 cup store bought organic powdered sugar in place of the maple sugar and arrowroot.

What I Used To Make My Cinnamon Coffee Cake:

Want More Paleo Baking Recipes?  Try One of These!