This creamy ranch potato salad is loaded with savory crispy bacon, green onions and couldn’t be easier to make!  A homemade Paleo and Whole30 ranch dressing gives this potato salad a zesty, addicting “cheesy” flavor even though it’s dairy-free! 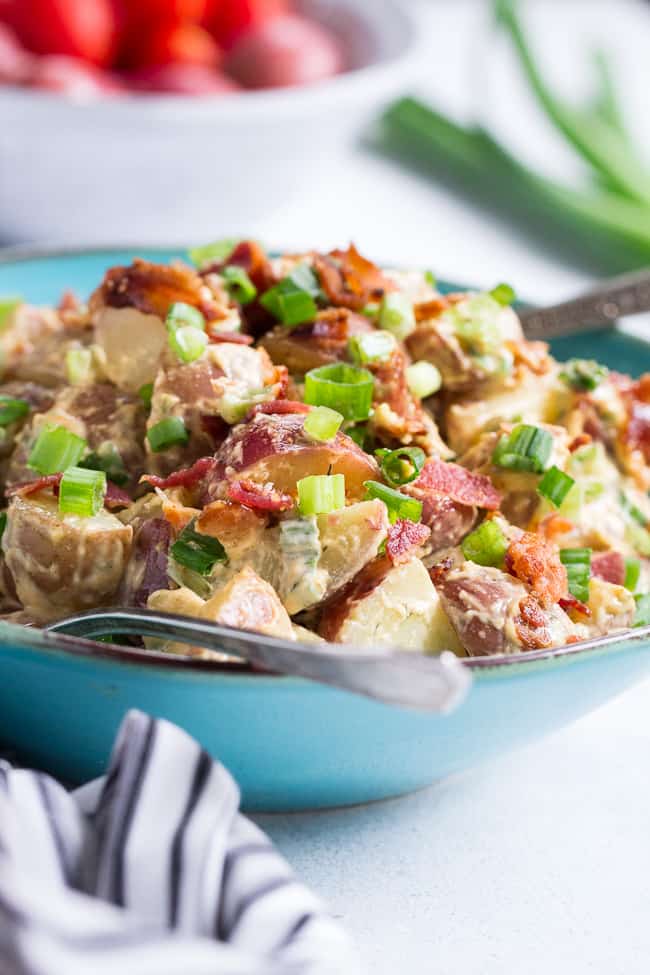 Potato salad has always been my “thing” – ever since college.  Sort of weird, right?   But yes, potato salad was always that thing I brought whenever I attended any gathering, the thing I put all my cooking pride in and the thing that probably started my love for cooking in the first place.  Potato salad.

And, oddly, my love for potato salad came out of the fact that prior to making my own, I couldn’t stand it.   In fact, it seems like all my favorite recipes are either inspired by something I LOVE or something I HATE.  As in when I hate something, I challenge myself to re-make it and LOVE it. 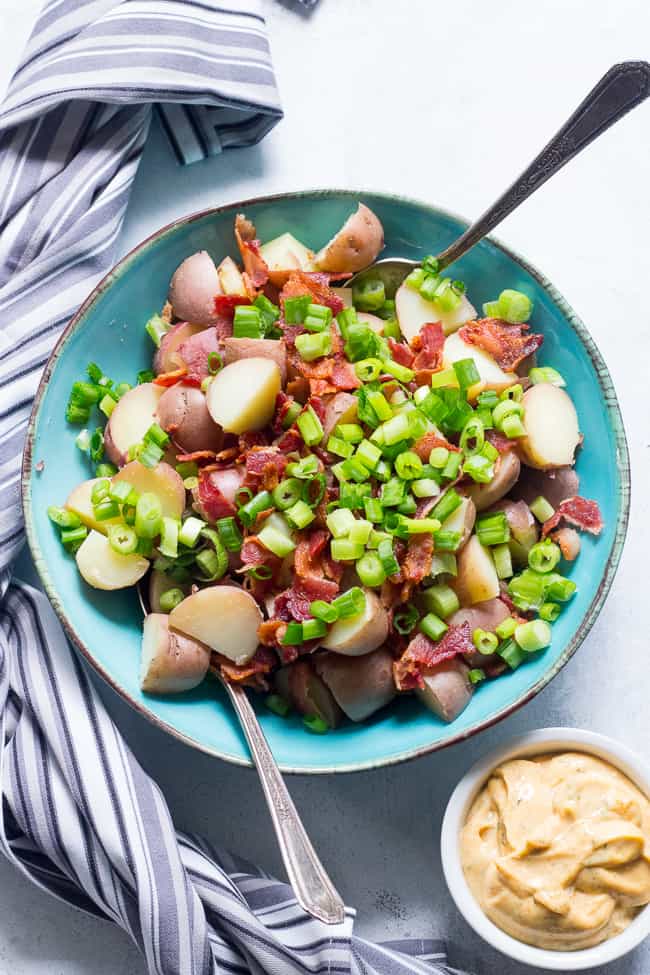 My first favorite potato salad was quite an ordeal to prepare since it contained eggs, bacon, roasted potatoes, onions, and celery.  I actually posted an updated paleo/whole30 version with white sweet potatoes on the blog early on, and in truth it remains my favorite.

The problem I have with it though, is that it simply takes forever to prepare, and most of the time nowadays, I just don’t have THAT kind of TIME to spend on a side dish, i.e. potato salad.  Nowadays, I have other things to do/cook/clean/whatever and feel like spending several hours on potato salad is frustrating and anxiety provoking.  Super dramatic, I know.   However, I STILL love my potato salad, especially now that we’re in grilling season, and needed to find a simple solution to the darn potato salad problem. 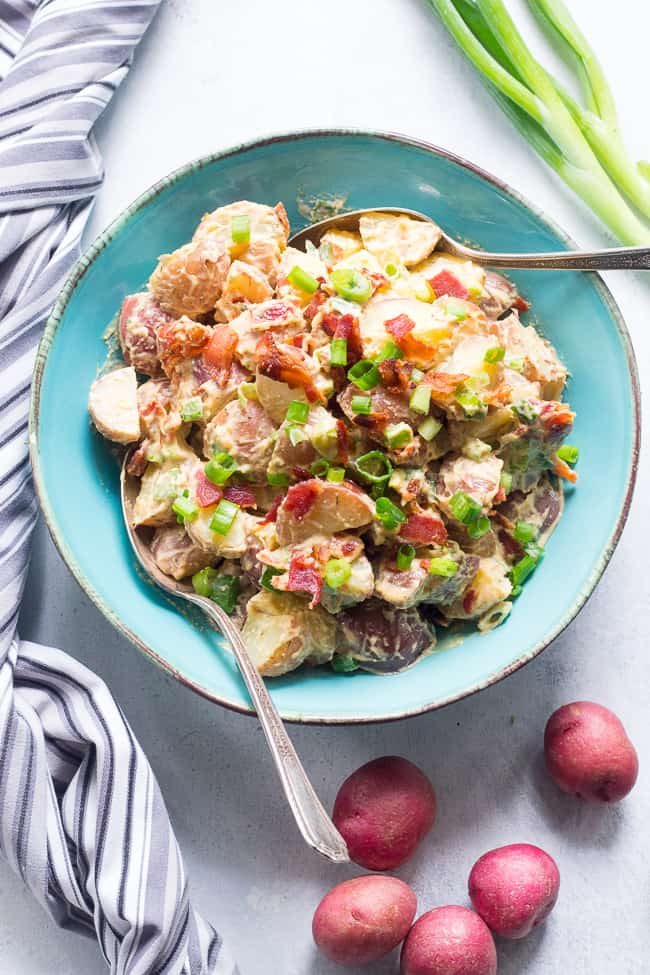 So, I decided to get right down to the basics – potatoes and bacon.  Yes, bacon is essential in my potato salad and I will not apologize for that one!  After the bacon, the ranch and green onions just sort of felt natural.  Tons of flavor, not much effort!

I also decided to use white potatoes – which (GASP!) are actually paleo for some people, although not for everyone (by the way, they are 100% Whole30 compliant as long as you’re not deep frying them.)

I often receive at least a couple of rude comments on my posts involving white potatoes telling me I’m being irresponsible in claiming white potatoes are paleo.   Of course, “paleo” is not an exact science at this point in time, and white potatoes can be fine for some of us following a paleo or mostly-paleo diet.  Since I started out paleo as a long distance runner, potatoes of all kinds had a part in my diet, but, if you’re a sweet-potato-only gal (or guy) then by all means, go with them (but use the white or japanese varieties since they’ll be so much yummier with this one!) 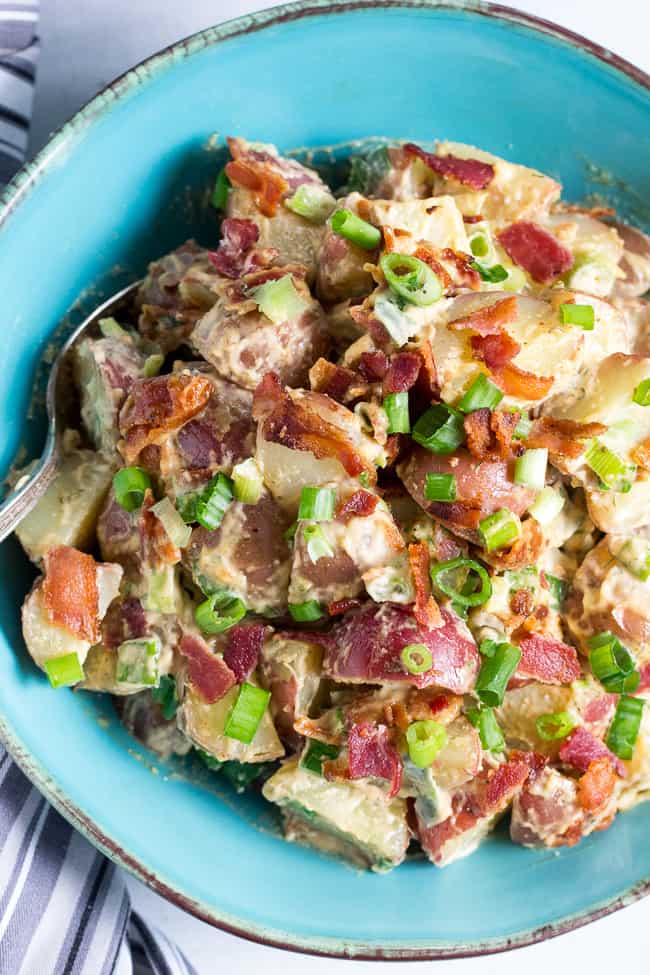 As for the ranch dressing – it really gives the potato salad a great flavor that mayo alone just can’t accomplish!   For this recipe, I created a super simple, thick and creamy mayo-based ranch, using my homemade mayo recipe as the base.   While the homemade version definitely has superior flavor (so consistent!), if you aren’t into homemade mayo, you can always purchase Whole30 mayo made with avocado oil to create a Whole30 and paleo friendly ranch.

Okay, guys, you are going to LOVE how simple and perfectly delicious this potato salad is!  I hope you’re ready to get started, let’s make this! 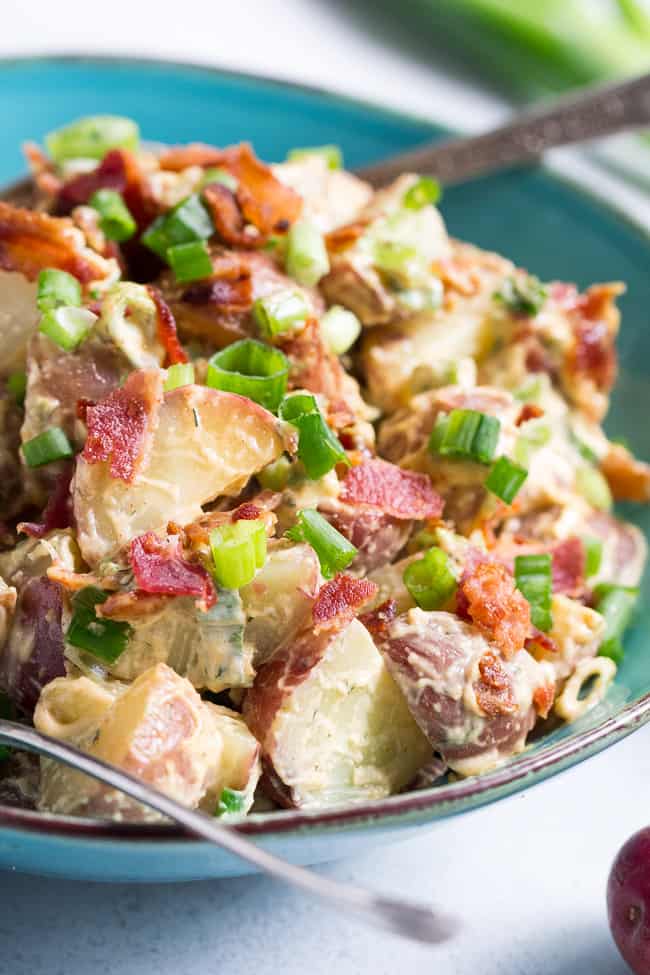 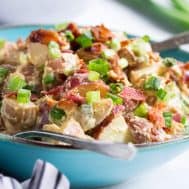 Print this Recipe
Did you make this recipe?
Leave a review
4.62 from 34 votes

For the Potato Salad:

*If you're following Whole30 make sure your bacon is sugar-free (most contain sugar.) My favorite Whole30 compliant bacon is from U.S. Wellness Meats.

What I Used to Make My Bacon Ranch Potato Salad:

Want More Paleo and Whole30 Side Dish Recipes?  Try one of these!

What are your favorite summer side dishes?