This veggie packed cashew cream cheese tastes so much like the real thing that you won’t believe it’s not actually cheese!  It’s made in minutes, great as a dip or spread, dairy free, vegan, paleo and Whole30. 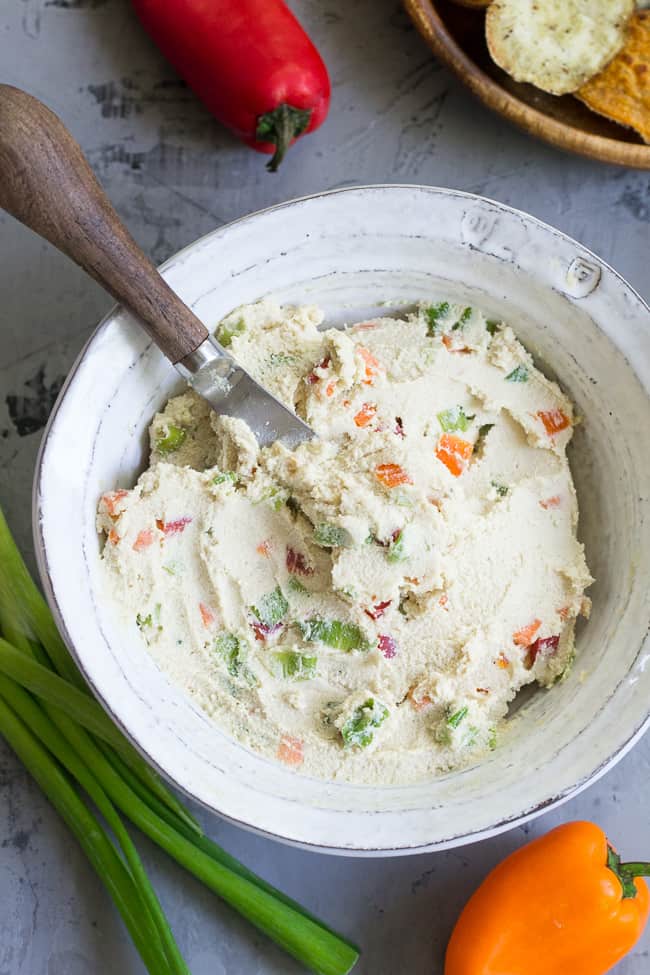 Living in the NY metro area my whole life, I’m a hopeless, desperate bagel snob.   Hopeless and desperate because I said bye-bye to bagels several years ago and, honestly, they’re the #1 thing I miss that I “can’t” eat.  “Can’t” in the sense that they make me feel like garbage and I am (technically) choosing not to eat them.

I’m not sure you’ll ever see a paleo bagel recipe on this site, BUT, if it does happen, you’ll know that it’s nothing short of a miracle, to be very clear 🙂  Anyway, while you won’t find any bagels popping up on Paleo Running Momma anytime soon, cashew cream cheese is another story entirely.   I avoided cashew cheese for way too long, not realizing how easy and actually good it is.  I started out sweet (because sweet seems safe somehow) but after making my chocolate chip cheesecake dip, I knew I had to experiment with a savory version ASAP. 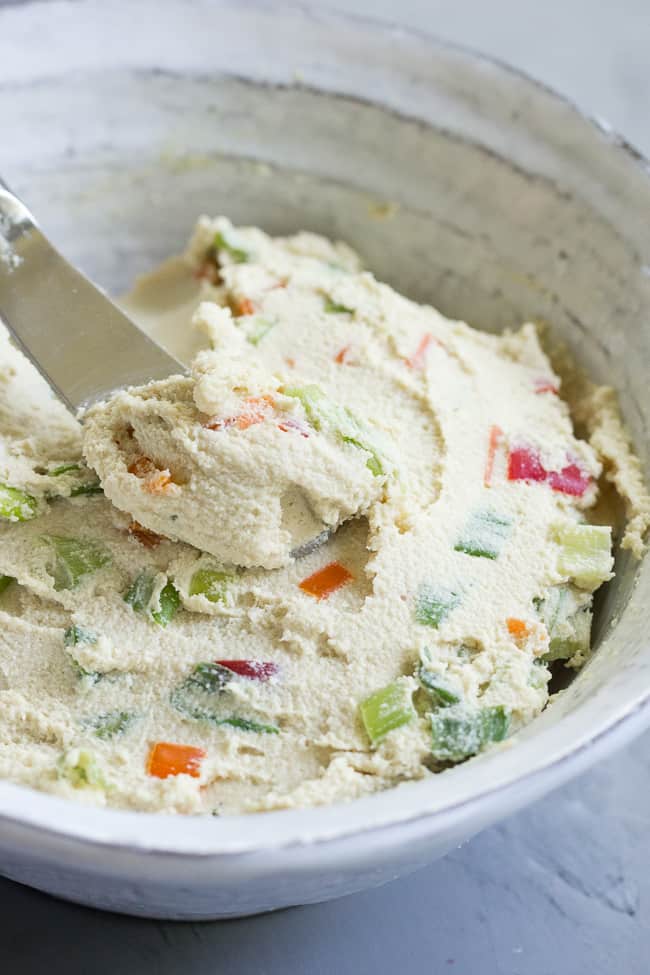 Yes, admittedly ASAP turned into a month or two, but HECK YES – this was worth the wait.  I couldn’t go with just a plain ‘ol cream cheese, I wanted to give this some flavor – so you could use it as a dip, spread, or topping as-is, without “missing” anything.

My two classic savory cream cheese flavors were always scallion and veggie, so I decided to just combine the two to create a veggie (and flavor) packed cashew cream cheese that’s paleo, vegan, and Whole30 compliant. 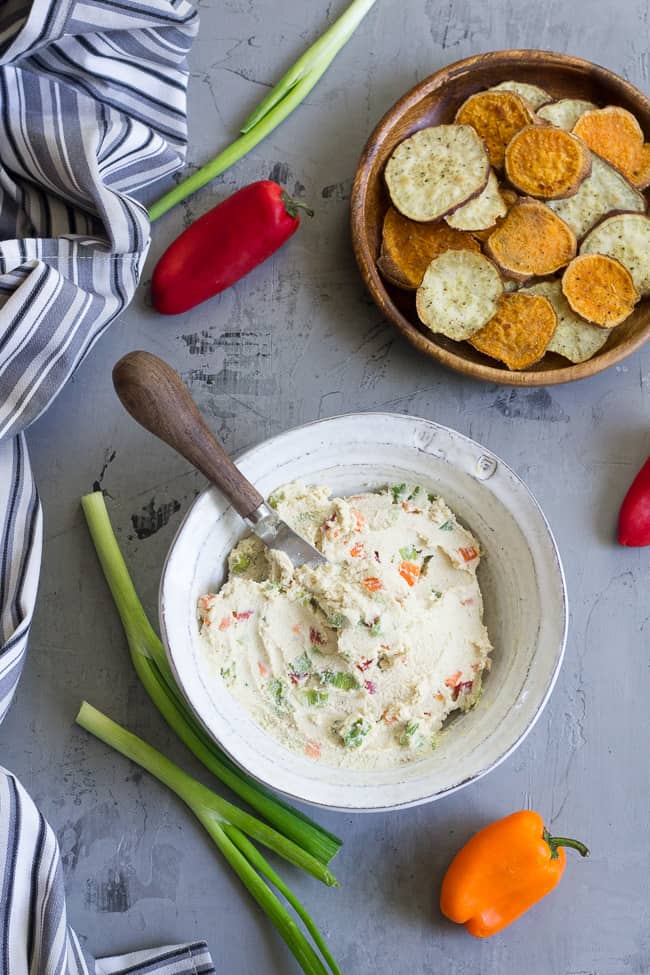 If you haven’t made cashew cheese before, here are my tips 🙂  The key to the creamy consistency is to:

1.) Soak the cashews in water (I use room temperature) for at least 4 hours.  By soaking I mean simply allowing them to sit in enough water to cover them completely – I put a kitchen towel over the top and  typically soak them overnight before using them.

2.) You’ll need either a food processor or high speed blender (like a Vitamix) – I wouldn’t attempt this with a regular blender because it’s just too much to handle.

3.) When I use my food processor, it typically takes several minutes of processing/stopping to scrape down the sides of the bowl before I get the consistency I want.  Patience!  If you’re using one of the two kitchen tools mentioned, it will turn out just fine – fool proof! 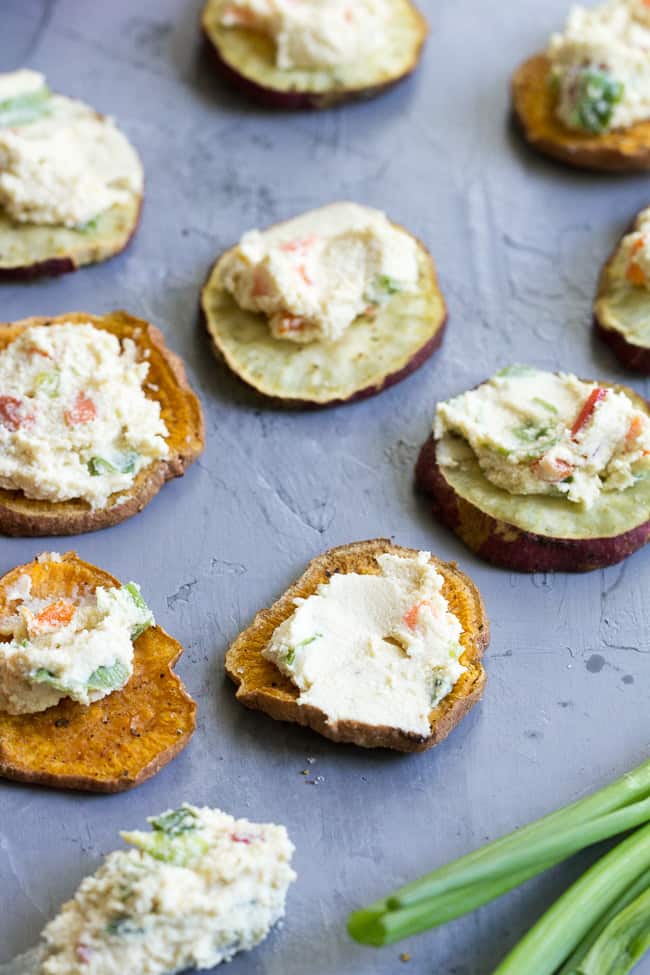 As for the flavor, just a Tbsp of nutritional yeast does WONDERS to make it taste truly cream-cheesy, along with the right amount of lemon and salt.  As for the coconut oil, it adds to the texture, but since you probably don’t want your cheese tasting like coconut, I HIGHLY recommend using organic refined coconut oil, which is totally flavorless.  I use refined for almost all my cooking and baking, since it’s never, EVER detected even by the pickiest of eaters.  For that it has my respect for a lifetime 🙂

After you get that nice smooth, thick, creamy texture (which, by the way, will thicken more when refrigerated), you stir in your thinly sliced scallions and finely chopped veggies.  I used peppers and carrots but you can add a little of whatever you like.

And, if you’re like me and bagels are just not happening anymore, have no fear!  I use mine as a spread for roasted sweet potato chips, savory plantain chips, a topping for baked potatoes or a dip for veggies.  Plus, you can definitely make savory muffins or bread, toast, and use the cream cheese as a spread.

Are you excited, are you ready?!  Let’s make cashew cream cheese! 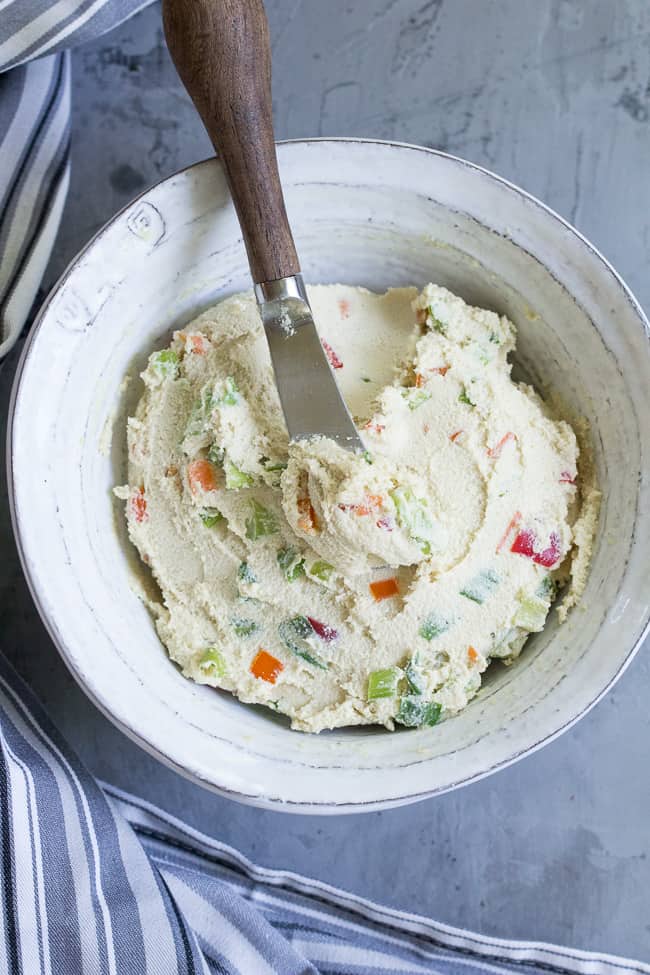 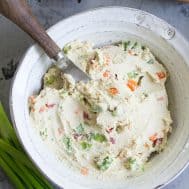 Print this Recipe
Did you make this recipe?
Leave a review
5 from 11 votes

*Prep time includes the time needed to soak the cashews

What I Used to Make My Veggie Packed Cashew Cream Cheese:

Want more savory Whole30 and paleo dips, dressings and sauces?  Try one of these!

Are you (or WERE you) a bagel snob?