These insanely fudgy raspberry brownies are easy to whip up and just happen to be good for you!  Rich chocolate paleo and vegan brownie batter is baked with an easy raspberry sauce for the ultimate fruit and chocolate combo.  They’re gluten-free, dairy-free, and completely addicting! 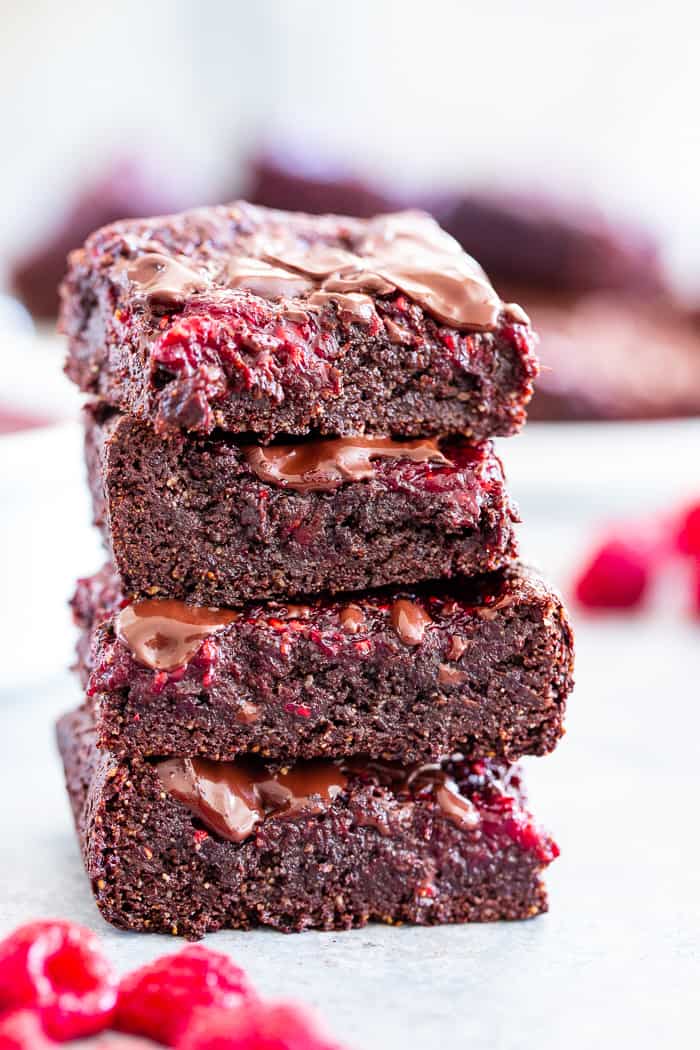 Get ready for the ultimate chocolate weekend, in honor of Valentine’s Day next week!   And get excited – both recipes are Paleo + Vegan, so they’re perfect for sharing with just about anyone 🙂

I tweaked my original paleo and vegan brownies a bit to accommodate lots of raspberry yumminess and they did not disappoint one bit! 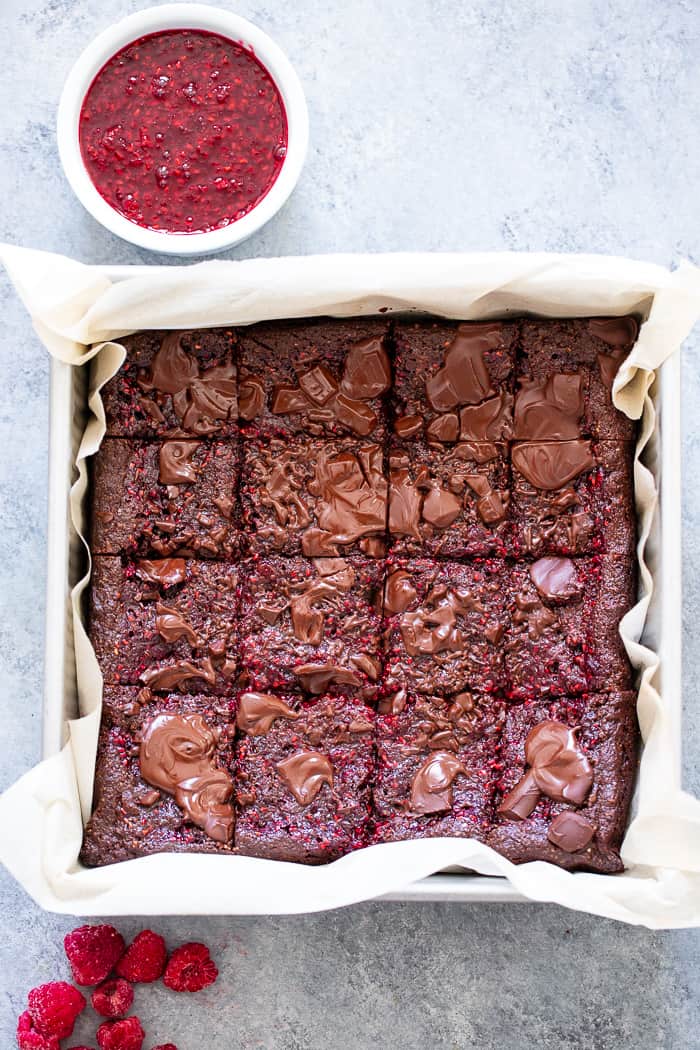 We start by making the raspberry sauce itself.  This way it has a chance to cool and thicken while we prepare the brownie batter.

The sauce is super easy – raspberries (frozen is fine) plus maple syrup and some tapioca to thicken it.  It doesn’t cook for long and it comes out sooo yummy – just try not to eat all of it before you make the brownie batter!

Although, you’re actually only using half of it for the brownies themselves – the rest you save for topping while serving.  So, I guess technically speaking we can all eat up to half of the raspberry sauce and still save the brownies.  Just saying. 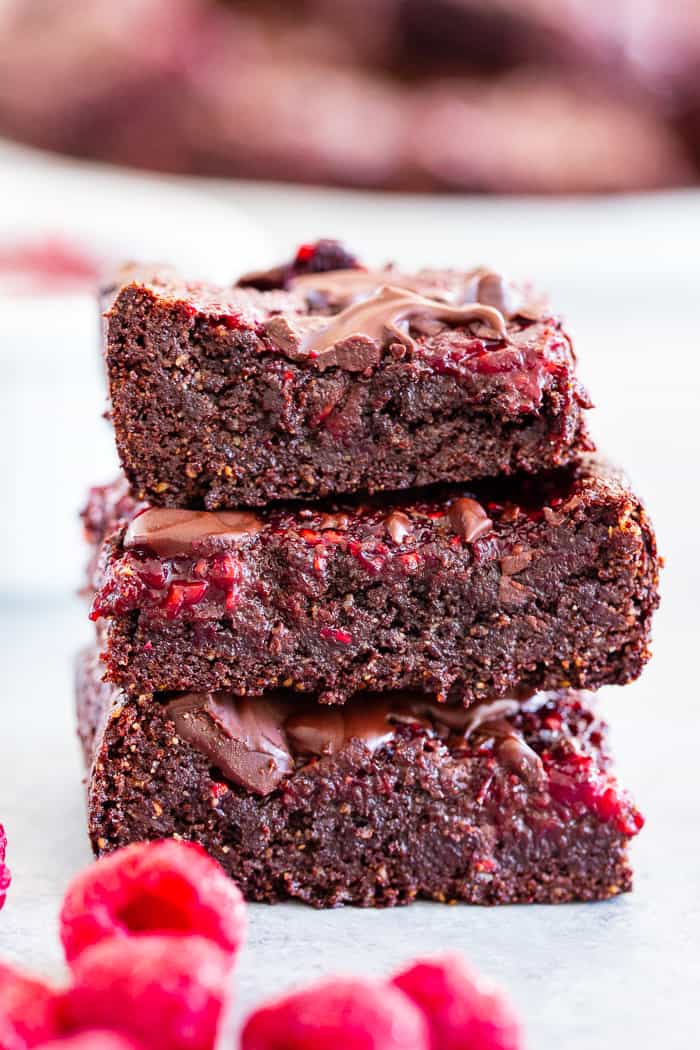 You will need 2 “flax eggs” for this one since it’s vegan, and I honestly feel they lend to the really fudgy gooey texture, so I recommend using them instead of eggs!  If you really want to use eggs, 1 whole and 1 yolk should do it.

Anyway, the flax eggs are easy to make – 2 Tbsp flaxseed (ground) mixed with 5 Tbsp water works for me.  You’ll allow it to sit for about 10 mins while you prepare the rest of the batter.  Easy peasy! 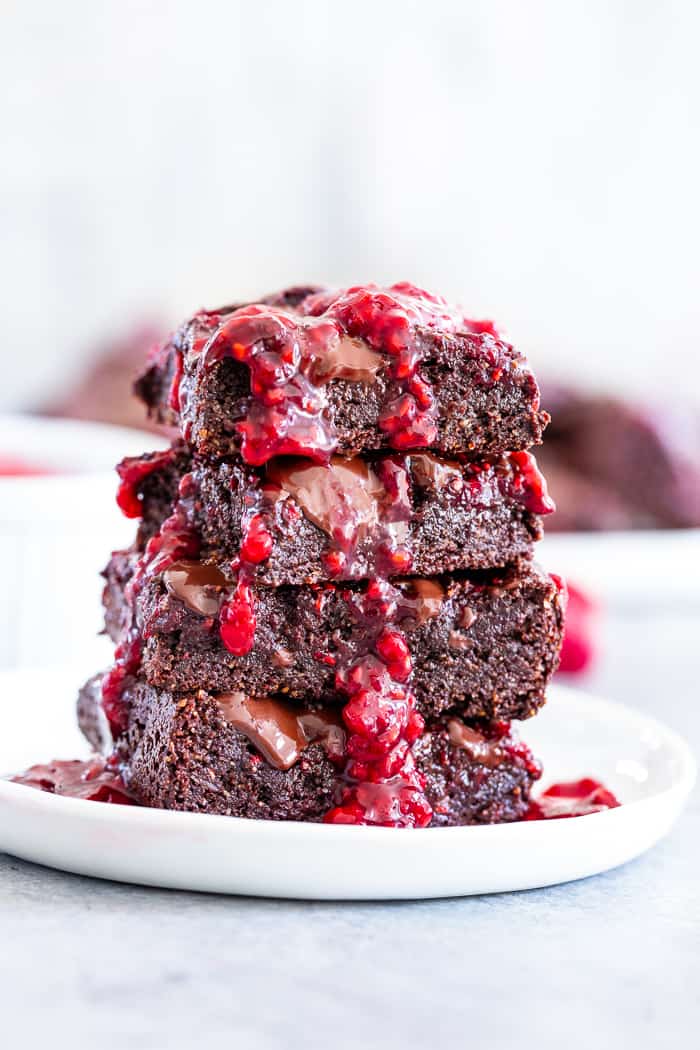 Seriously, that sauce is so good!  In the brownie pan, you’ll layer the brownie batter with 1/2 the raspberry sauce, and then sort of swirl it in to incorporate.  This doesn’t have to look pretty, but it will in the end anyway!

After baking, I sprinkled some chopped dark chocolate over the top, which melts and makes these even more chocolatey and rich.  The brownies will need to cool completely in order to get that nice fudgy texture that’s easy to cut into pieces.  I typically chill mine to speed up the cooling!

If you’re really going for that WOW factor, make a brownie sundae with a scoop of coconut vanilla ice cream and the rest of that raspberry sauce.  Seriously, this combo is even better than you’re imagining!  I hope you’re ready for chocolate bliss because it’s absolutely about to happen in your house – let’s go! 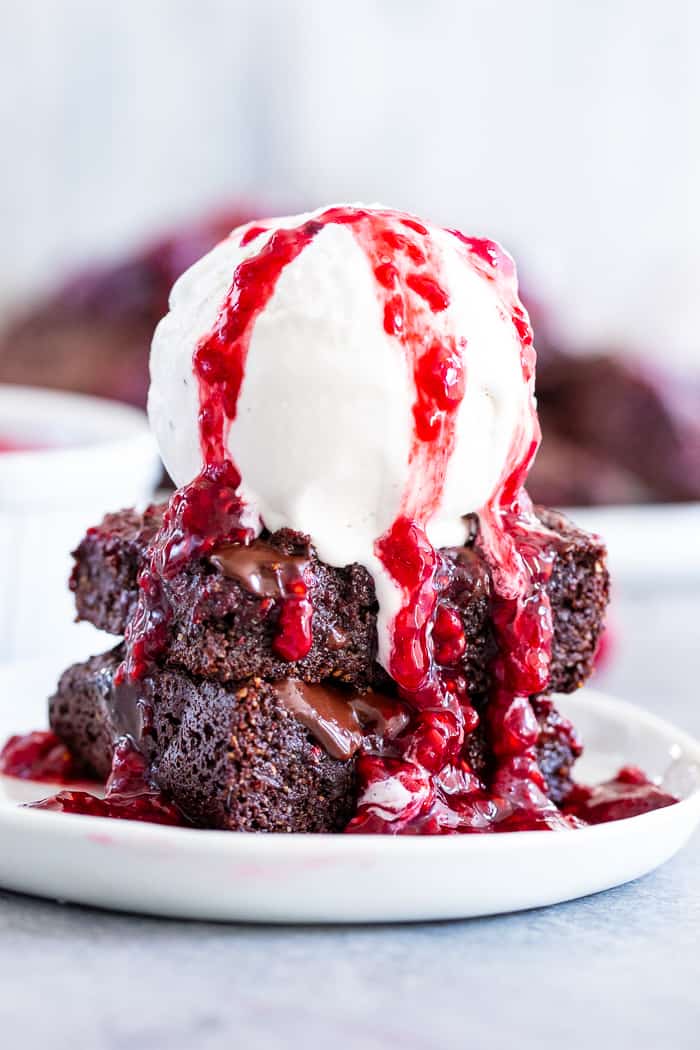 Print this Recipe
Did you make this recipe?
Leave a review
4.53 from 17 votes

Want More Paleo and Vegan Dessert Recipes?  Try One of These!