Get excited, because the creamiest, smoothest, richest vegan chocolate cheesecake is about to happen in your kitchen!  This cheesecake has a chocolate cookie crust with a cashew and coconut cream based chocolate filling that tastes like a traditional cheesecake.  It’s paleo, gluten-free, vegan, and refined sugar free. 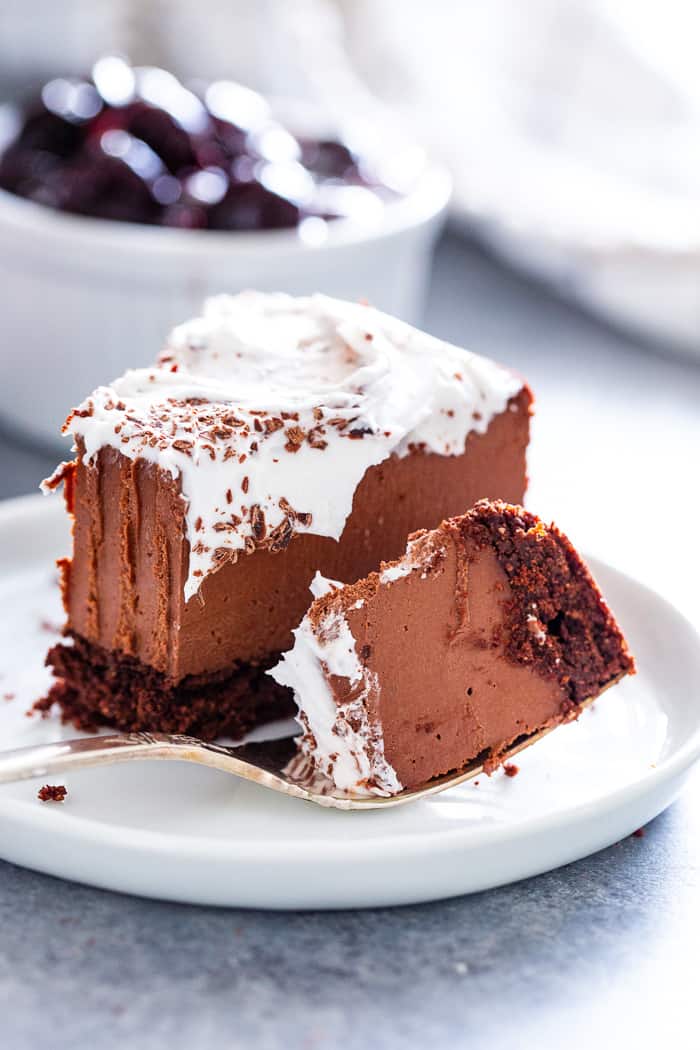 Can I just start of this post by telling you I’ve never made a vegan cheesecake SO creamy?  I’m obsessed with this vegan chocolate cheesecake, guys.  I’m completely crazy about it – and I mean that sincerely, let me tell you!

But let’s backtrack just a bit to what I wanted to accomplish here with this cheesecake.  We’re coming up on Valentine’s Day, and for me that is basically just the best excuse in the world to unleash the chocolate beast in me.  Since you’re here, I’m guessing you just might share the sentiment.

Anyway, I wanted to make another vegan cheesecake, since, ahem, it’s been awhile.  I was inspired by my chocolate chip cookie vanilla cheesecake specifically, which is vegan but not no-bake since it has a baked cookie crust. 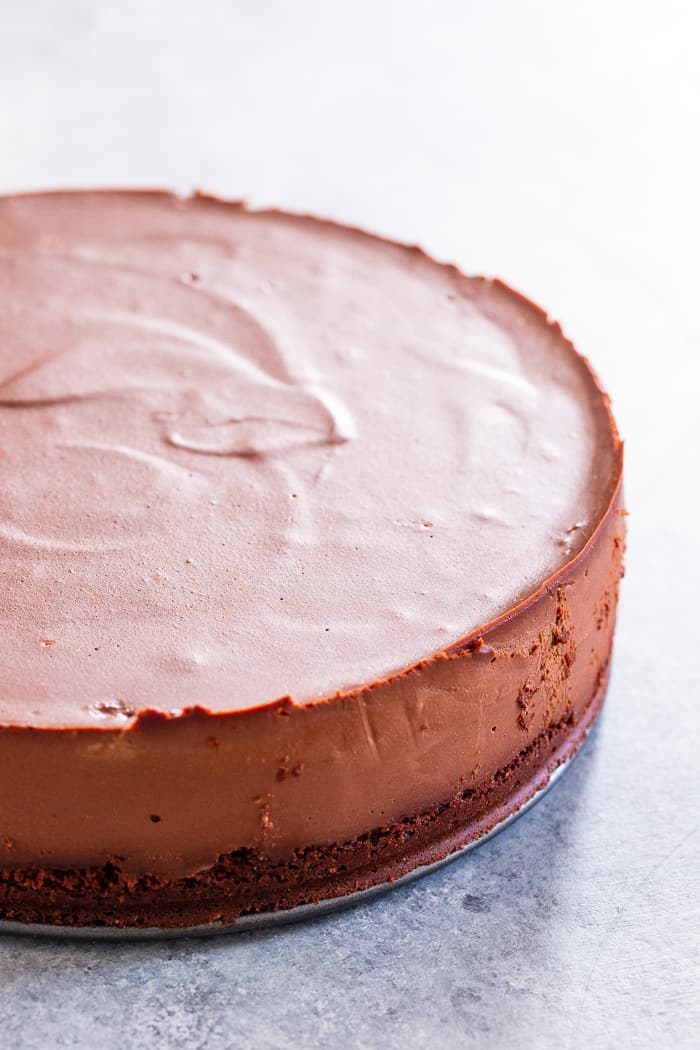 For this rich, velvety creamy chocolate version, we start with a chocolate version of that same crust.  It bakes for just about 10 minutes, and during that time you’ll prepare the cheesecake layer.

This is where all the magic happens for me.  You see, I taste test my recipes while making them as often as possible.   This one was no exception.  I tweaked the chocolate cheesecake layer until I was satisfied that it tasted like LEGIT chocolate cheesecake (you know, the ones made with cream cheese.)

My Vitamix did an incredible job blending everything up – it was just insanely creamy.  I typically use my food processor, but from now on, my Vitamix will do the job!

That being said, if you only have a food processor you will still get an amazing vegan cheesecake – don’t waste a second worrying about it!

After you pour the cheesecake layer over the crust, the cake needs to chill either in the refrigerator or freezer to firm up.  I prefer the fridge since it brings it to a thick, creamy texture without having to thaw out at all.

At least 4 hours is ideal – overnight is your best bet.  Mainly because it’s easier to avoid sneaking bites of it while you’re sleeping 😉 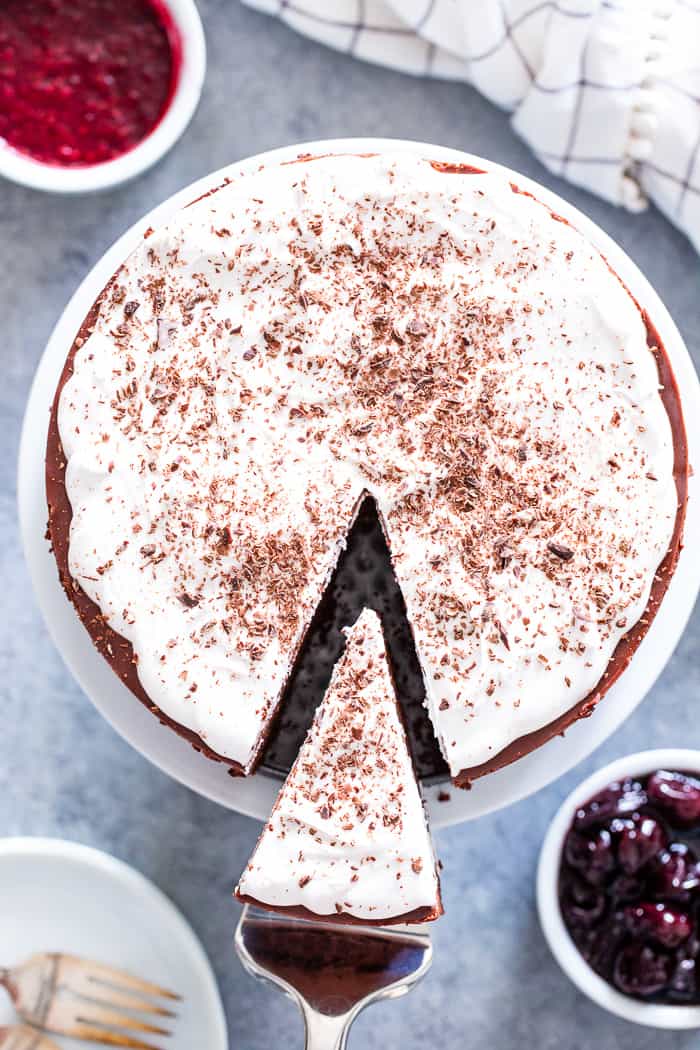 To top it off, I made an easy homemade coconut whipped cream coconut cream (this is the thick part of a chilled can of coconut milk), maple syrup and a touch of vanilla.  I grated a super dark chocolate bar for an extra chocolatey touch.

Since we all know chocolate and fruit make great luuuvaaaas, I also included a quick recipe for a cherry topping if you’re so inclined.  It’s just a combination of frozen cherries, maple syrup, and a bit of tapioca to thicken, but DANG, it is soooo yummy! 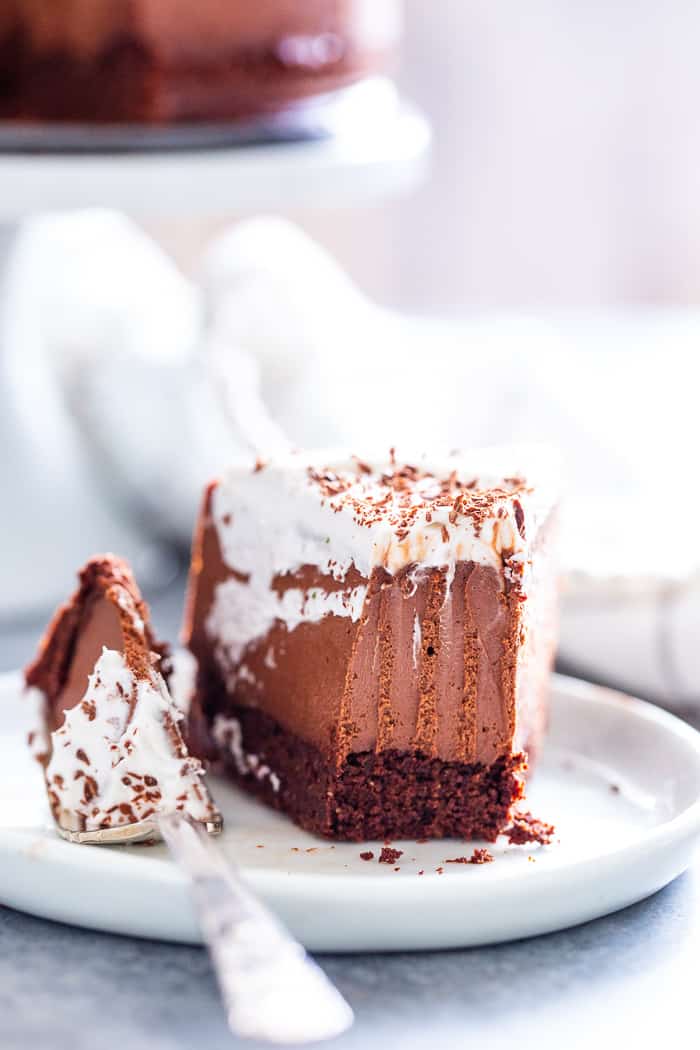 This paleo + vegan chocolate cheesecake is one that literally every person will love, regardless of whether they follow a paleo or vegan diet or not.  Seriously, it’s flipping amazing!

Rich, ridiculously creamy, and absolutely necessary for all you chocoholics out there!  I hope you’re ready for cheesecake heaven because it’s about to come to your kitchen – let’s go! 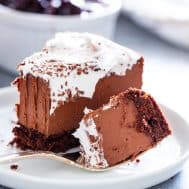 Print this Recipe
Did you make this recipe?
Leave a review
4.7 from 26 votes

For the Cherry Topping:

For the Whipped Cream:

* Prep time does not include the time needed to soak the cashews.

**Nutrition is calculated without the cherries and whipped cream

Want More Vegan Cheesecake Recipes?  Try One of These