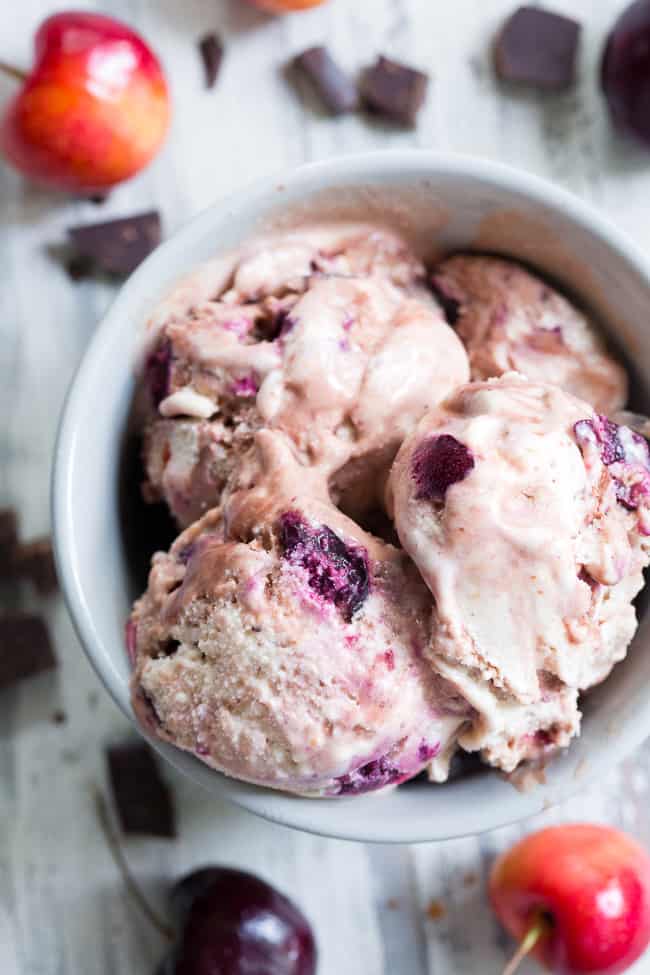 Cherries and chocolate – is there anyone who can say no to that combo?  I mean who would ever want to?

I remember the first time I had a chocolate covered cherry.  I believe it was from one of those boxes that you had to sell to family members/whoever back in elementary school in exchange for getting a slinky or something.

The chocolate cherries, of course, became my new favorite thing, and, perhaps, I might even consider them my favorite chocolate candy of all time.  Or close.  They’re definitely up there in the top 5! 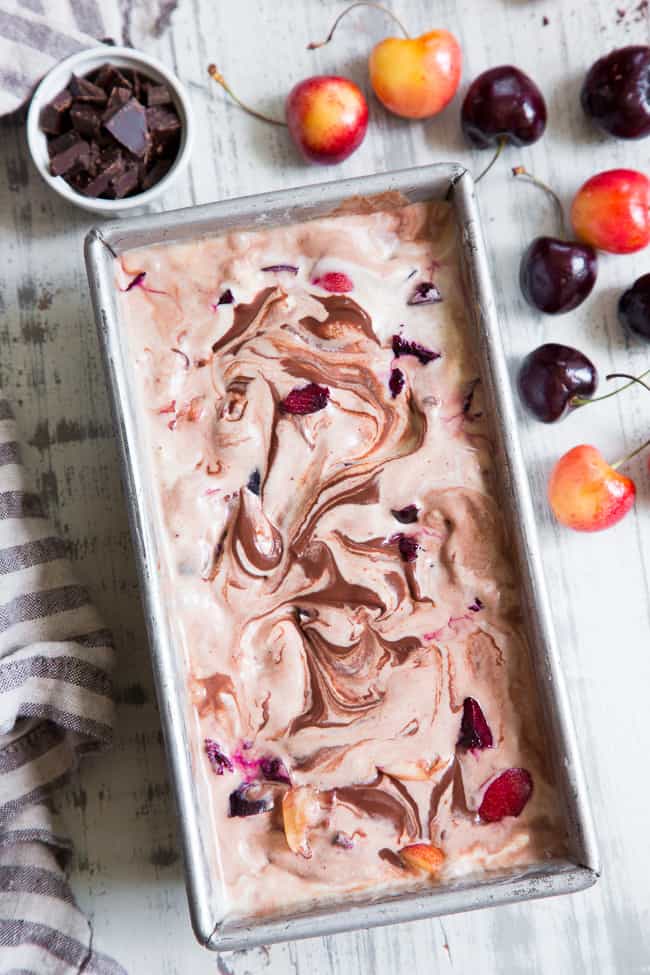 I’ve thought about making a paleo version of actual chocolate covered cherries about a thousand times, but then, each time, I realize they’re just one of those desserts that needs to remain in its original form the sake of the memory!

However, that doesn’t mean I don’t want to combine chocolate and cherries in other ways, like say, for example in an ice cream.  And hey, look what we have right here – a paleo and vegan cherry fudge swirl ice cream!

What a coincidence.  Obviously. 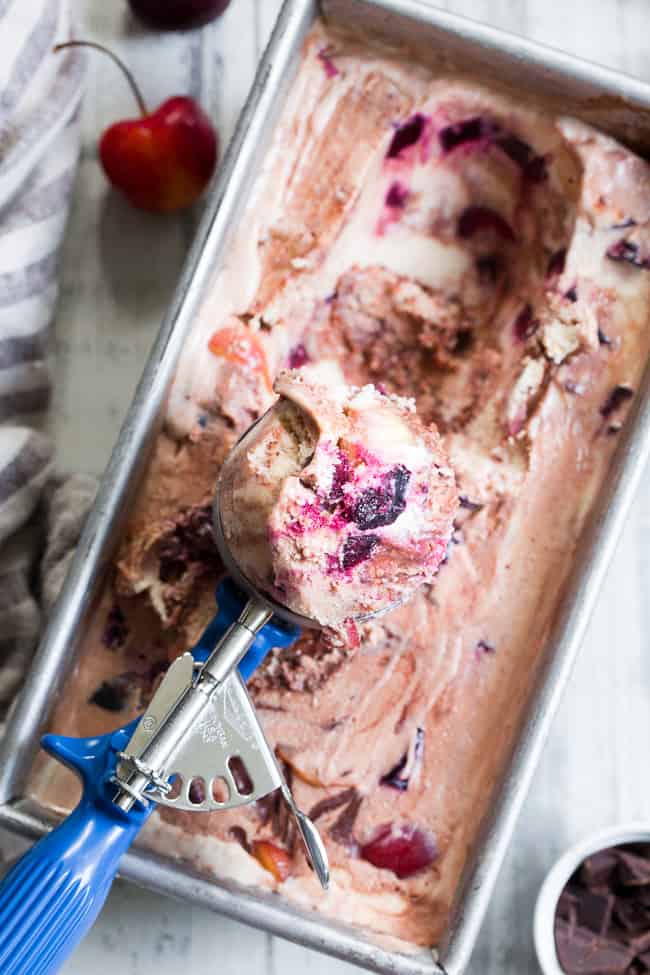 Joking aside, I’ve wanted to make a cherry/chocolate ice cream all summer. I  was originally thinking about a fudge chunk ice cream, and to be totally honest, that was my intention when I began the recipe!

But, the fudge “chunks” I made never actually hardened (coconut milk measurement was off!) but rather chilled into a thick gooey sauce that I knew would be perfect to swirl in for rich chocolate flavor next to the vanilla base.

And also (of course!) alongside those cherries! 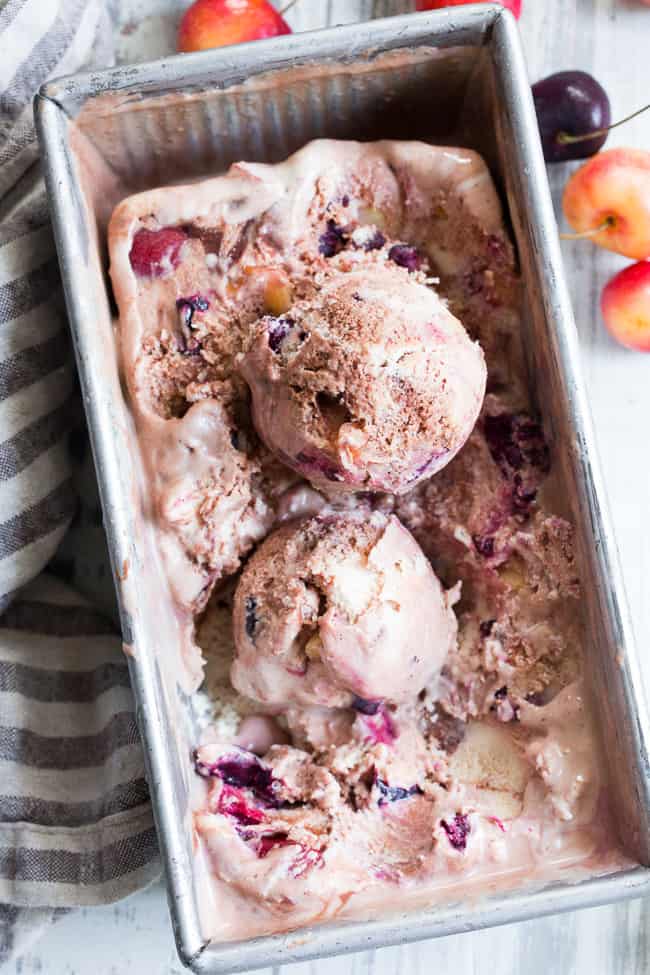 The ice cream itself is really simple if you have a great ice cream maker like this one I use.  It’s a coconut milk base sweetened with both maple sugar and syrup – a combo I’ve been loving lately for homemade ice cream.

The maple sugar is fine enough to avoid any graininess and actually thickens the ice cream as well.  If you haven’t tried it, you absolutely must!  It’s become my go-to granulated sweetener for nearly everything and once you try it, you’ll be hooked too. 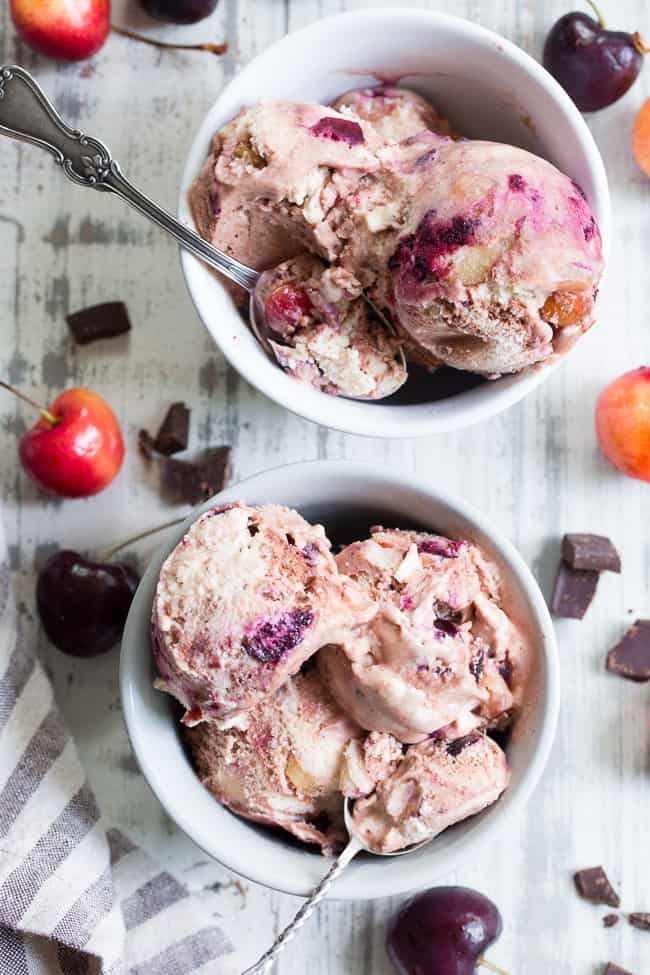 Even with the ice cream maker, I find that coconut milk ice cream can still become a bit icy in the freezer.

My solution to this is actually to add a bit of almond butter or cashew butter to the ice cream base – it helps make it creamier and avoid that “frozen solid” thing that can happen.

I also add extra vanilla extract to help with the iciness, and honestly, I’m not totally sure it works, but, it makes the ice cream taste amazing!

Okay, I think we’re all absolutely dying to finally make this cherry fudge swirl ice cream!  Let’s get those cherries pitted and churn away! 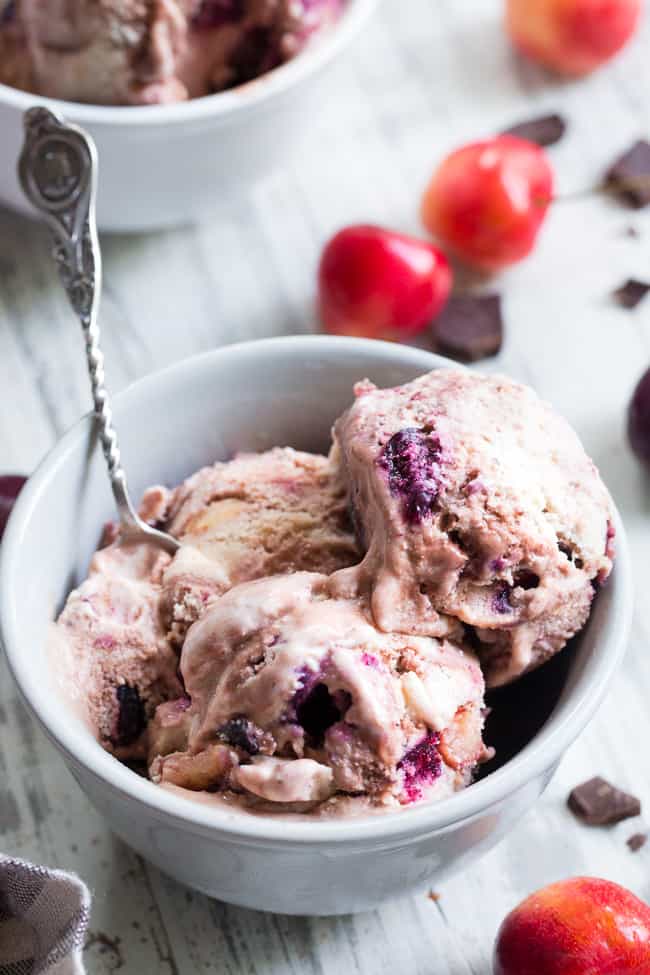 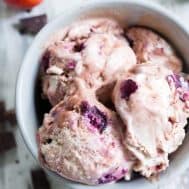 Print this Recipe
Did you make this recipe?
Leave a review
4 from 5 votes

*Chill for at least 24 hours prior to opening. After opening, discard about half of the water part (it’s mostly clear) from each can prior to using in the recipe **you can use any creamy nut butter for this is desired, it helps the ice cream not to freeze solid.

Want More Paleo and Vegan Ice Cream Recipes?  Try One of These!