These deliciously hearty yet soft and moist Paleo cinnamon raisin banana muffins are made with no grains, dairy, and no added sugar.  They’re gluten free, Paleo, sweetened only with bananas and perfect for breakfast or a snack! Kid approved and easy to make! 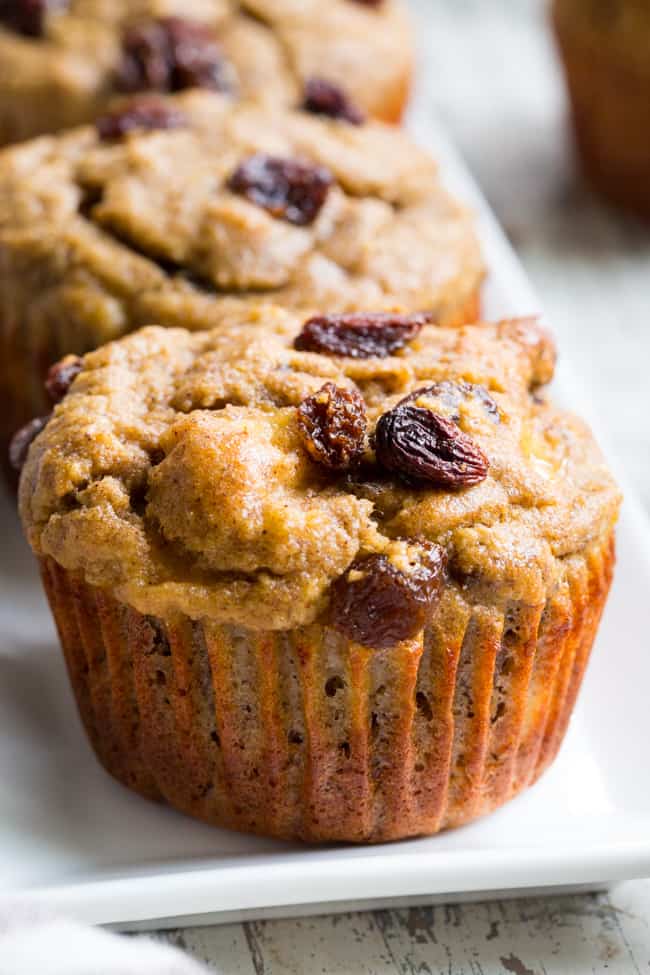 Here it is – the last non-fall-baking recipe you’re going to see for awhile!

I’m just itching (weird word) to break out all the pumpkin and apple goodness that I’ve been working on for nearly a month now, but for today, we’re going back to classic and simple with these no-sugar added cinnamon raisin banana muffins. 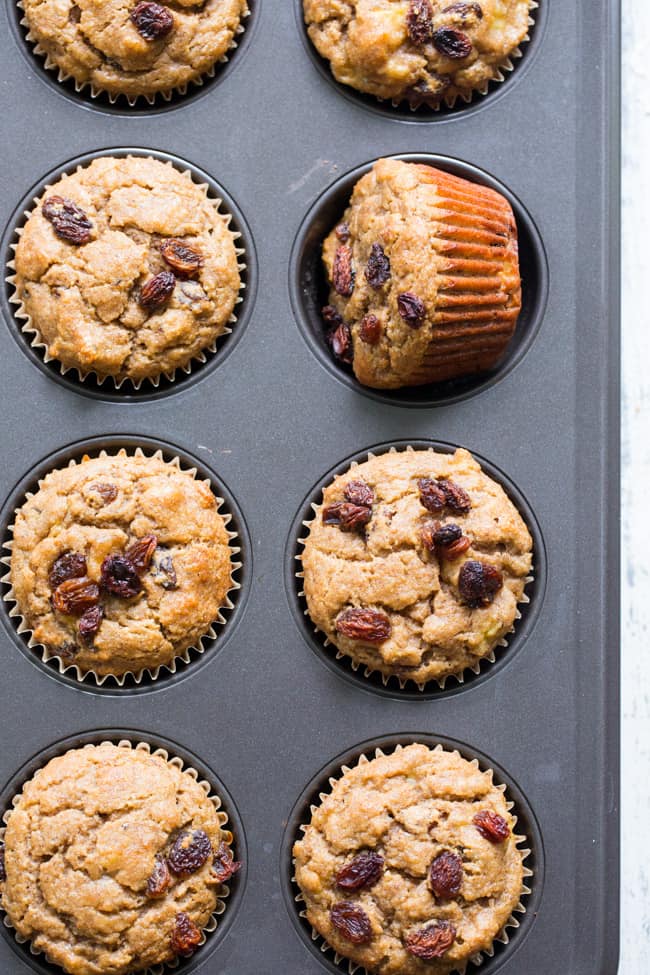 I really just can’t ever NOT make banana bread or muffins whenever I have a couple of ripe bananas leftover, which is actually pretty often lately since it seems my family is on some sort of banana strike.

It makes no sense to me, because bananas will always be a go-to snack for me, but then again, it means more banana muffins and THAT is always a good thing.

I based these muffins on my wildly popular hearty paleo banana bread because 1.) why not, it’s delicious and 2.) as it turns out, there’s really no need to add sweetener of any kind to banana bread.  There, I said it, and now I’ll never be able to take it back! 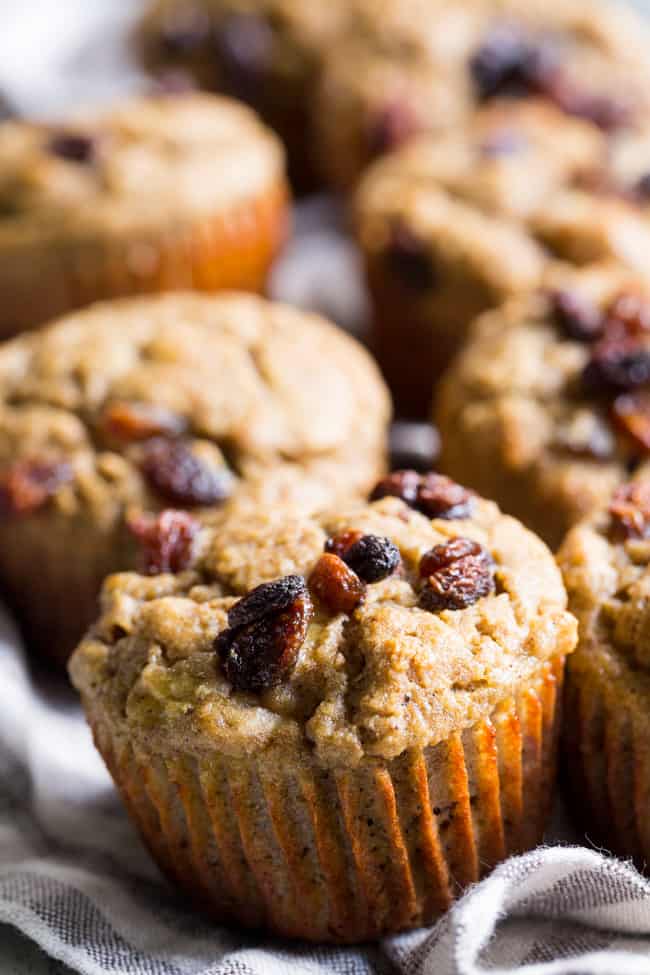 Since I wanted these muffins to sort of ease us into the spirit of fall I decided to make them cinnamon raisin flavored.  Not because cinnamon raisin is so “fall” but because for some reason my brain wants to make it that way, and so for me, it just is.

If you didn’t follow that last sentence, don’t worry, I’m not sure I did either 🙂

Anyway, these grain free and paleo banana muffins are just packed with natural sweetness and warmth from the bananas, cinnamon, and raisins. 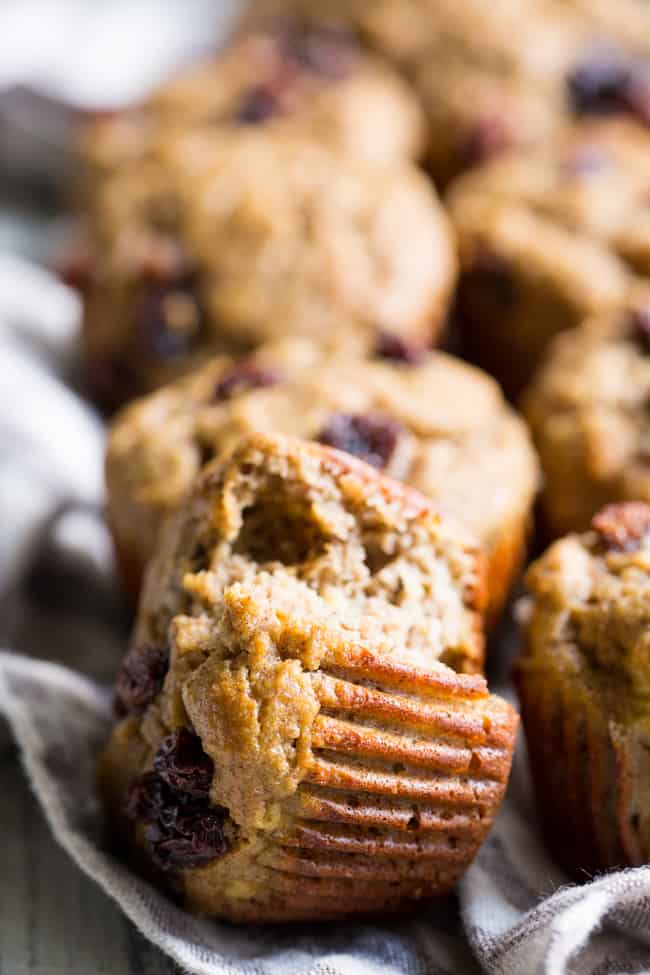 They’re perfect, really – with great rise, moist (but not too moist), and hearty texture.  And, I’m not just saying “perfect” because they’re my own recipe.  I’ve been known to be quite the harsh critic (ahem) of my own baking, so when I say things like this, don’t take it lightly.

Well, that sounded oddly threatening, but, ignore the tone and just know that you’re about to make a delicious healthy snack that everyone in your family will enjoy, as long as they don’t hate raisins, cinnamon, or banana bread, of course.

I think we’re ready to go!  Get your aprons on and bananas mashed – it’s time to bake the BEST banana muffins! 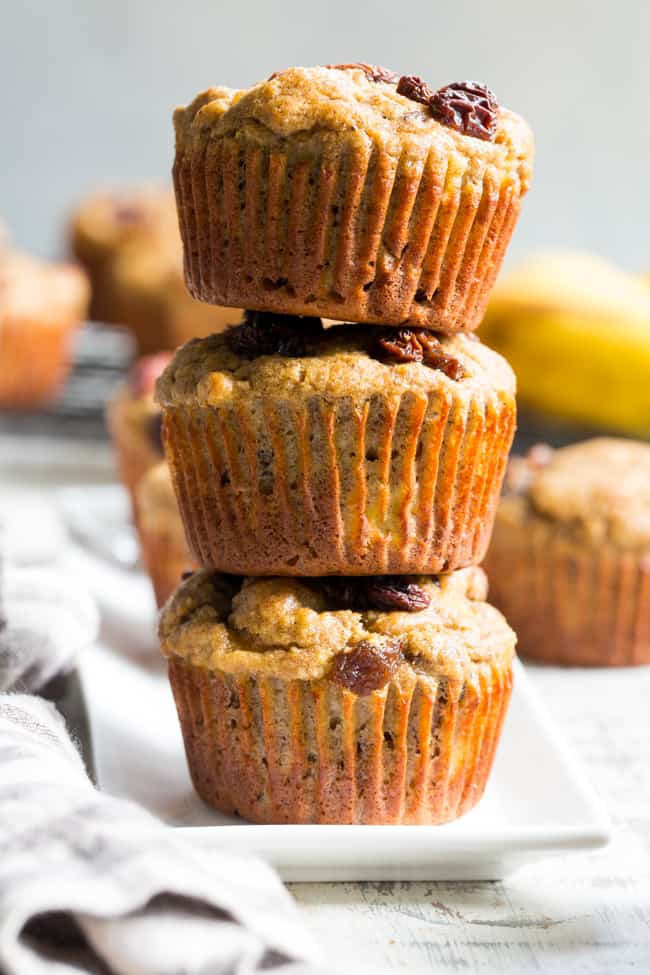 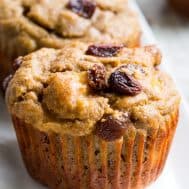 Print this Recipe
Did you make this recipe?
Leave a review
4.72 from 21 votes

*To make paleo-friendly (corn free) baking powder, mix 1 tsp baking soda with 2 tsp cream of tartar. For this recipe, you will need just 1 tsp total of this mixture.

Want More Paleo Banana Breads and Muffins?  Try One of These Similar Recipes: