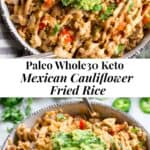 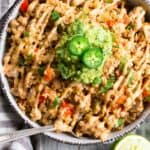 This Mexican Cauliflower Fried Rice is packed with veggies, protein, and lots of flavor and spice!  It’s topped with an easy guacamole and chipotle ranch sauce for a tasty, filling meal that’s Paleo, Whole30 compliant and keto friendly. 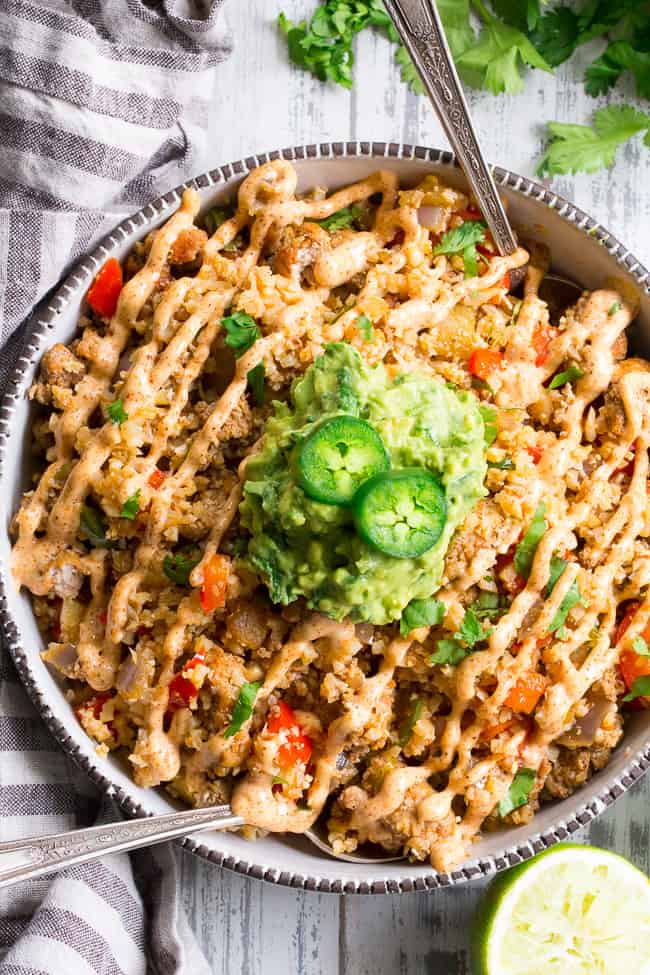 This is one of those simple, yet really delicious and satisfying recipes that makes me LOVE paleo and Whole30 cooking!

True story – I wasn’t always on board with cauliflower rice.  I thought it was far too much of an effort to “rice” the cauliflower and I didn’t yet realize how tasty cauliflower fried rice could be!

My vision of cauli rice was a whole lot of mess with resulting boring mushy “rice” that tasted nothing like actual rice. 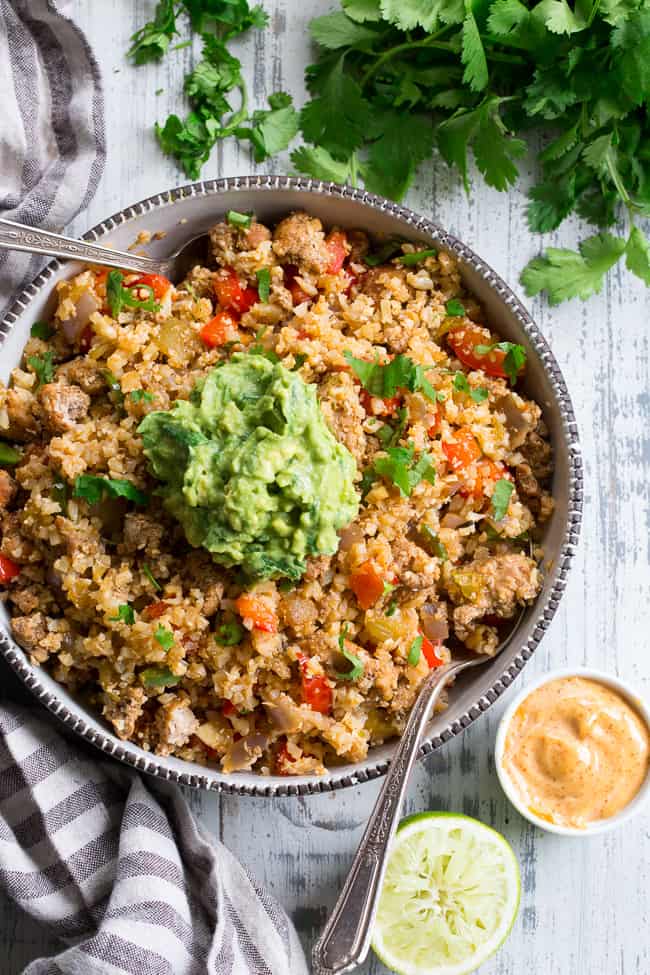 I also needed to accept that I was going to have to compromise with myself and be lazy – I bought the pre-“riced” cauliflower at the grocery store and didn’t look back. For all of you who ain’t got no time for the mess – get the pre-riced cauli!  And, for those of you who like ricing your own – more power to you!

Anyway, cauli rice can definitely be awesome in its own right – it’s amazing sauteed/fried, and picks up all the flavors it mixes with like a dream.  When I first decided to make this chicken and bacon fried rice, I was completely sold – cauliflower rice can actually be pretty darn awesome. 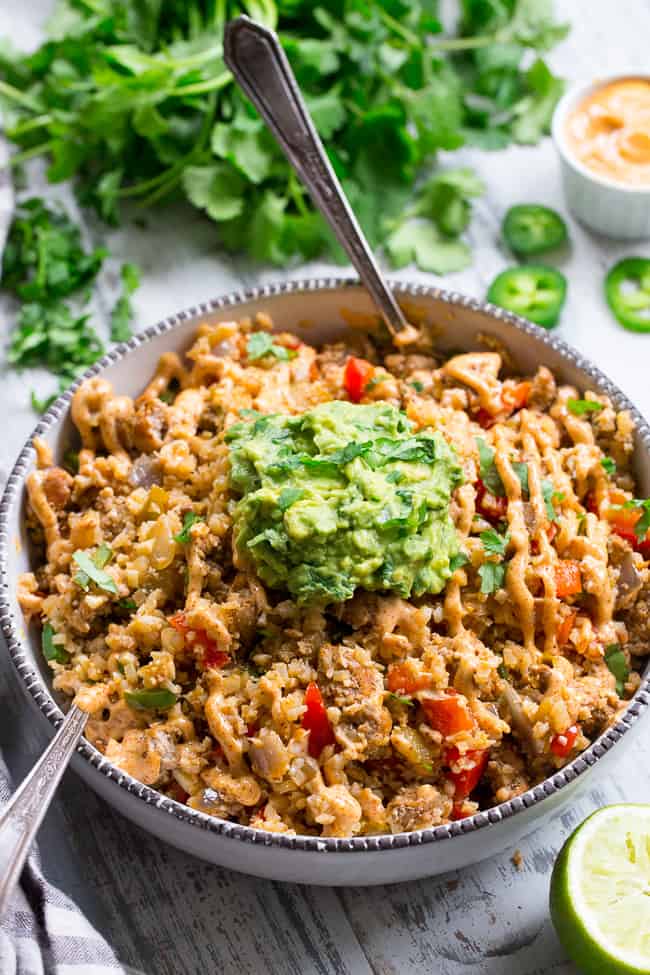 I knew I was due for another cauliflower fried rice recipe but I wanted to make the flavors really different than the last.

I decided to go the Mexican-inspired route since I’ve been on a big guacamole kick lately – it’s SO perfect to top off this cauli rice!

For the ground meat, I actually used a mixture of ground beef and ground chicken, just based on what was in my fridge.  You can use any ground meat at all, but I highly recommend one that’s a little less lean since it adds better flavor in my opinion.  That said, simply adding a bit more cooking fat if you use a leaner meat will work out just fine. 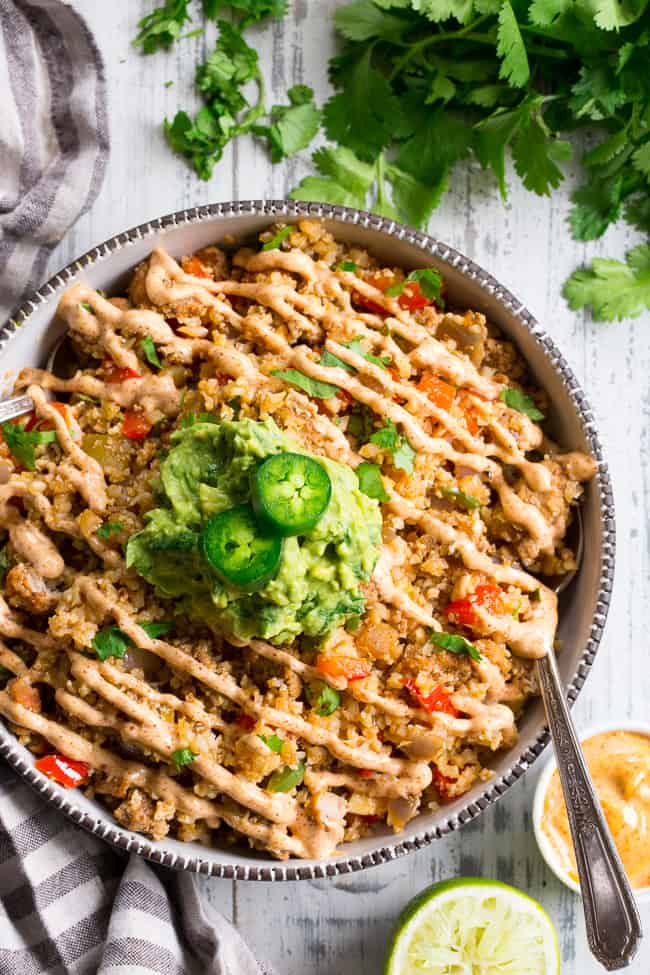 I went with my chipotle ranch – which is probably my most-made mayo-based dip/sauce.  It goes with nearly everything and it’s so perfect here!

The guac also takes it to the next level – you get healthy fats, flavor, texture – the whole deal.   Also, if you’re planning to make this ahead of time, you can prepare everything in advance with the exception of the guacamole and be totally good to go with a toss in the skillet to reheat the fried rice.

I hope you’re ready for an easy and oh-so-yummy, filling and heathy meal – let’s get cooking! 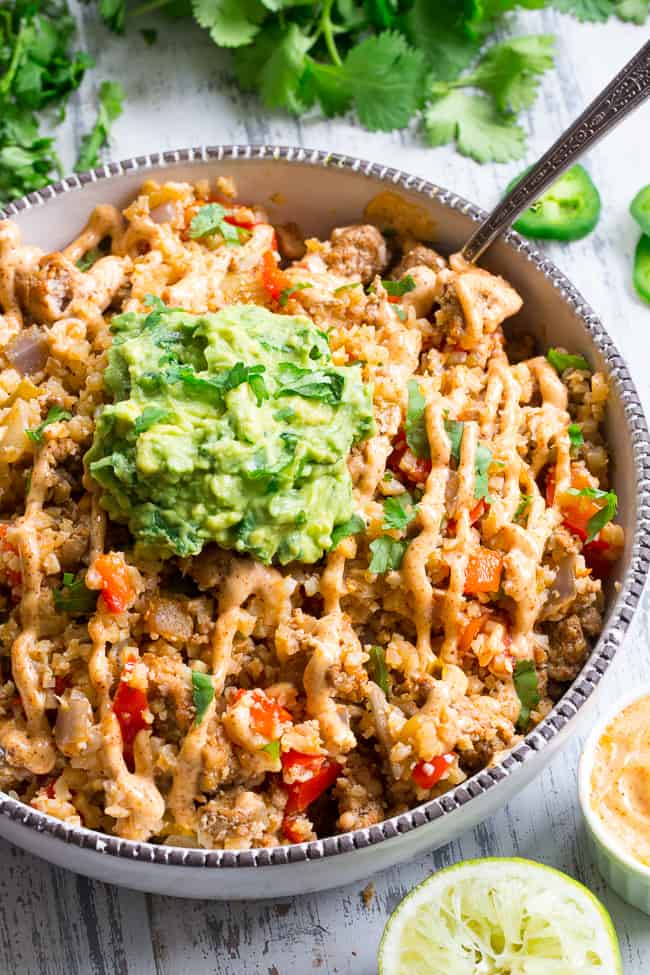 This Mexican Cauliflower Rice is packed with veggies, protein, and lots of flavor and spice!  It's topped with an easy guacamole and chipotle ranch sauce for a tasty, filling meal that's Paleo, Whole30 compliant and keto friendly. 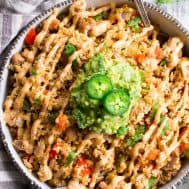 Print this Recipe
Did you make this recipe?
Leave a review
4.65 from 125 votes 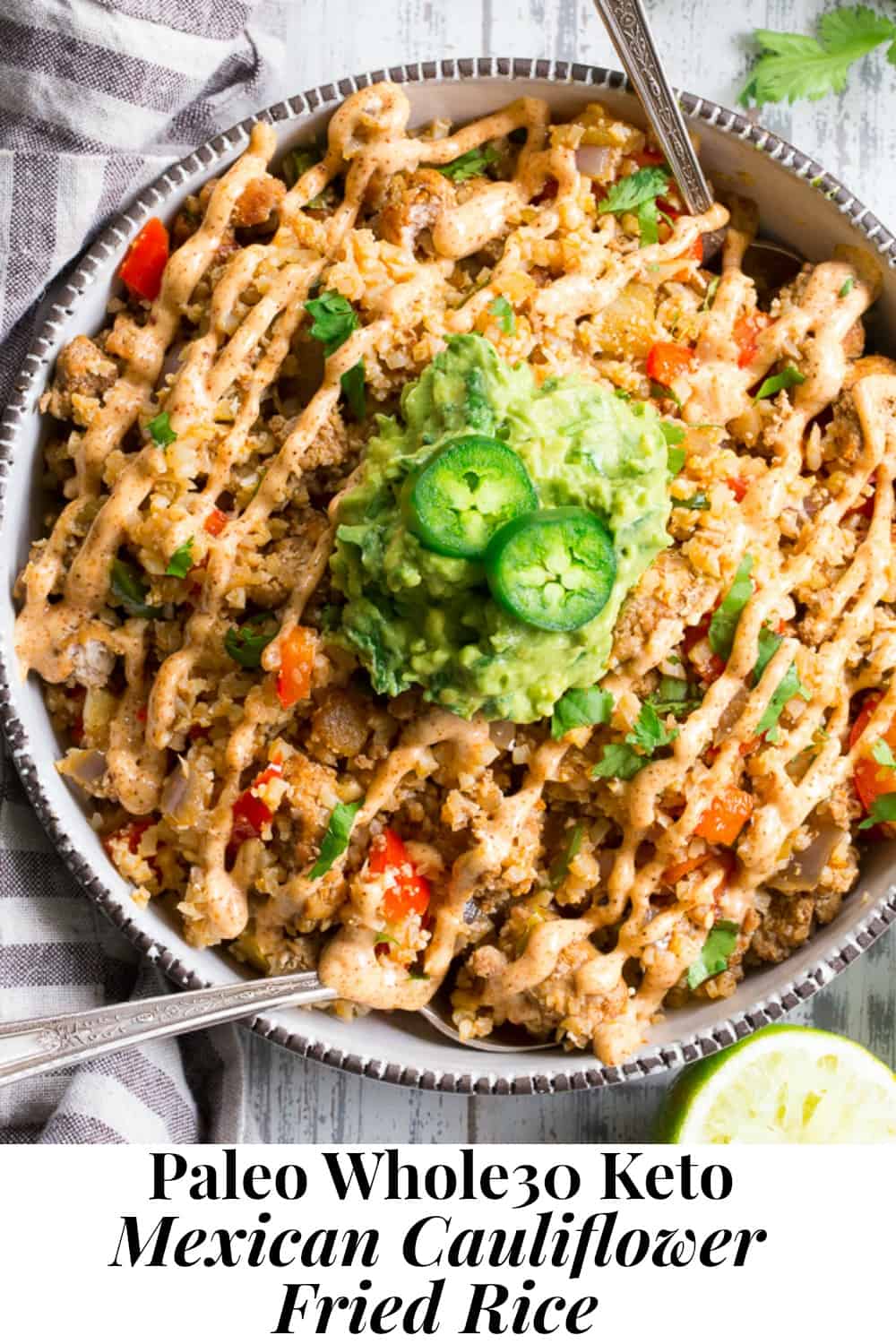 Want More Whole30 and Keto Recipes?  Try One Of These!

Breakfast Egg Roll in a Bowl