These crispy potato latkes are my family’s ultimate favorite side dish recipe!  They’re packed with flavor, so crispy, gluten-free, paleo, and Whole30 compliant.  Perfect for holiday gatherings or any special brunch or dinner! 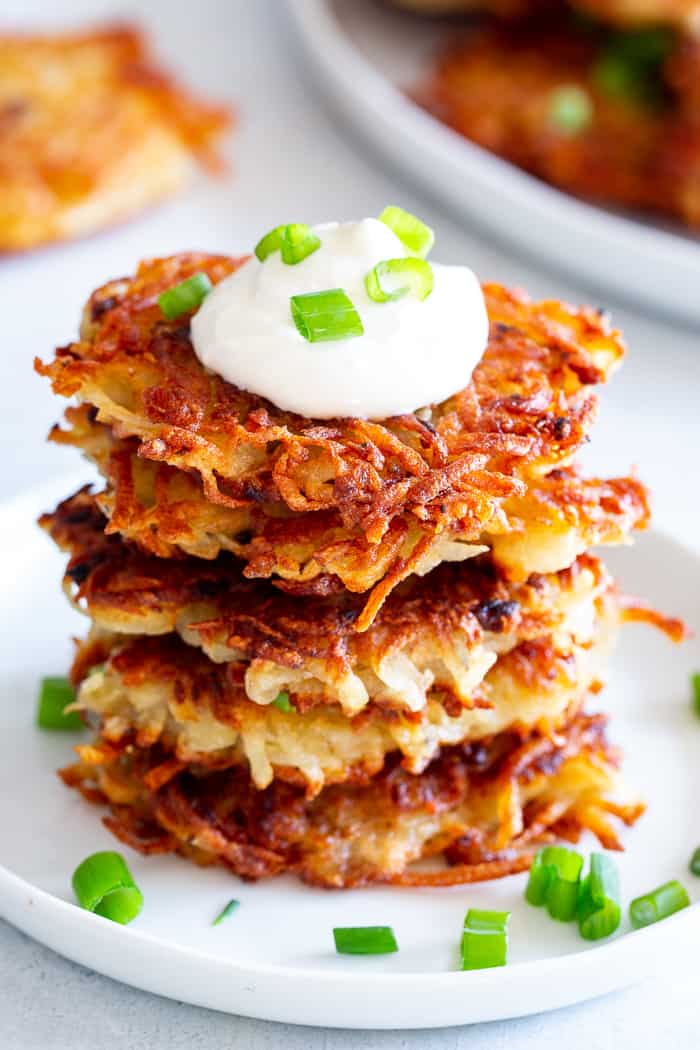 These latkes are EVERYTHING to my family.  I don’t make them often (usually reserve for holidays) so when I do, excitement levels run high.  People fight over them, I have to put limits in place, and it gets a little crazy all around.

Which is not to dissuade you from making them, obviously.  Fighting and all – these crispy, Whole30 compliant latkes are 100% worth it.  And hey, you can always make a double batch (that’s right – 48!) if you have a family who demands unlimited access to crispy potato latkes. 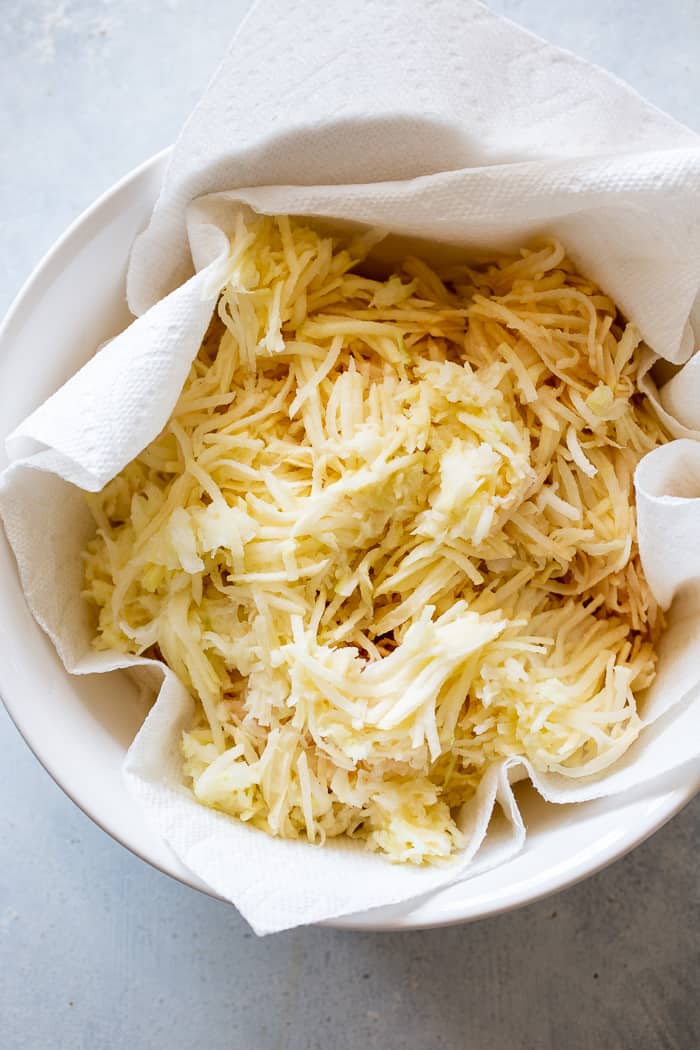 What You Need to Make Crispy Potato Latkes

If you want to go for the Whole30 ketchup and ranch, I highly recommend Tessemae’s or Primal Kitchen – both brands have awesome options for Paleo and Whole30 friendly dips and dressings.

How To Make Paleo Sour Cream

If you want an option for “sour cream” that’s dairy free and don’t mind coconut cream – here’s a great option.  Use just the thick part of a call of full fat coconut milk – discard the water.  In order to get your coconut milk to separate, it will need to chill overnight.

Mix your coconut cream with fresh lemon juice and sea salt, to taste.  Yup, that’s it!  It’s not for everyone, but if sour cream is a must for your latkes but dairy is out, I recommend giving it a shot. 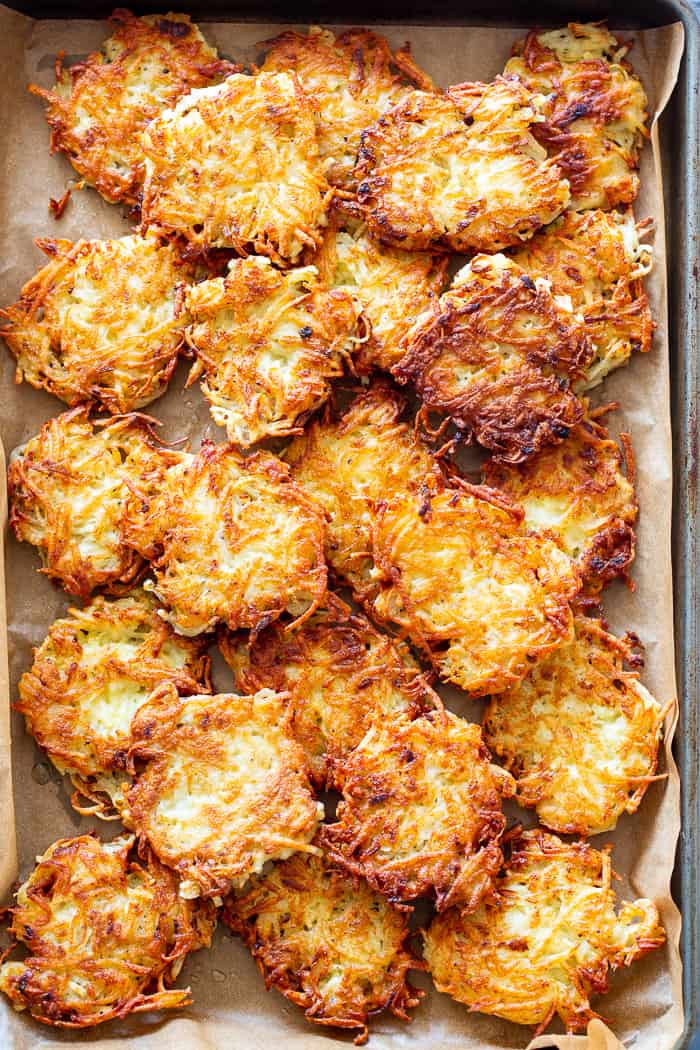 How to Make the Crispiest Potato Latkes

Getting crispy latkes is a MUST when I make these for my family.  There are three steps to get the latkes really crispy.

First, squeeze your shredded potato and onion mixture 2-3 times to get the maximum amount of water out.  I typically go through a lot of paper towels doing this, but it’s worth it to really get all the excess liquid out.

Of course, liquid will still appear in the mixture as it sits (usually when you’re frying them in several batches.) Just make sure to either dab up the extra liquid, or avoid it when forming your latkes.

Second, you want to get the oil very hot before frying, and KEEP the oil at a pretty constant temperature while you fry the latkes.  I typically adjust the heat from med-high, to medium and even lower sometimes to keep my latkes frying up nice and crispy without burning.

You don’t want a raw middle and a burnt outside, but you also don’t want them soggy throughout!  You shouldn’t need to take the temperature of the oil, but realize that the temperature will drop a lot as you start frying, and rise as you continue – especially between batches.

Third – keep them crispy!  I drain each batch on paper towel, then transfer to a parchment lined baking sheet and put them straight in a 300° F oven.  This temperature keeps them crisp without browning them any further. 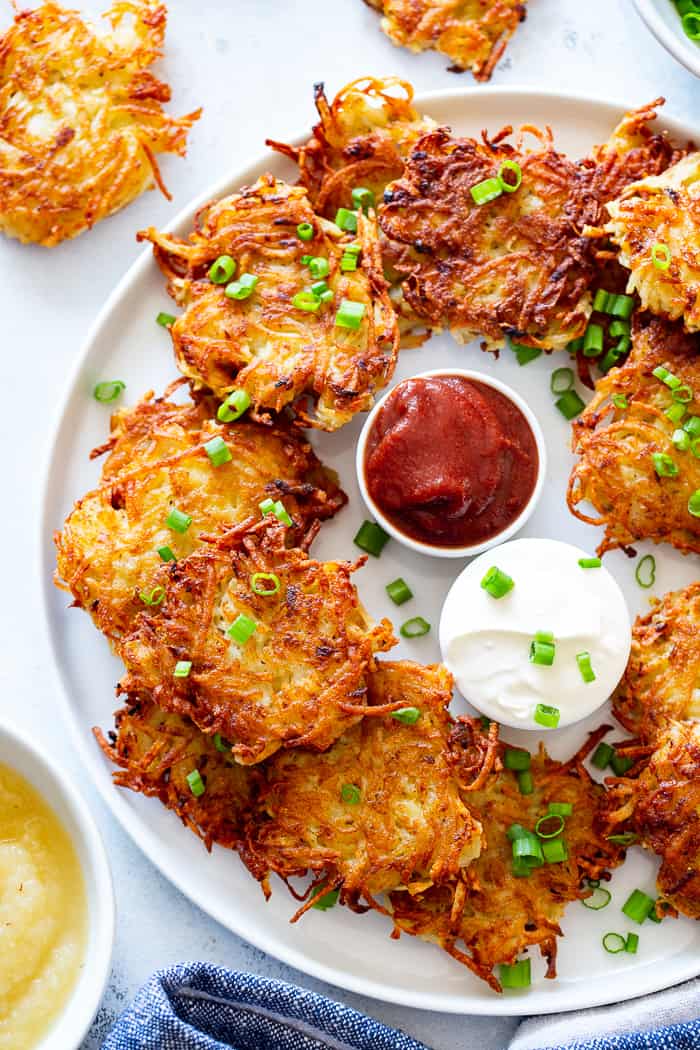 I get this question every time I post something involving white potatoes.  The answer depends on who you ask, but for the most part (at this point in time), most will say that white potatoes can absolutely fit into a paleo diet!

White potatoes were added into the Whole30 program several years back (as long as we’re not talking restaurant fries!).  And yes, they are high in carbs, but the Paleo diet isn’t about limiting carbs – it’s about eating real food.

That said, not every “real food” is for everyone of course – so it’s best for you to decide what works for you and what doesn’t.  Labels aren’t as important as nourishing your body based on what makes it healthier!  And that will be different for each person.  For more info on the white potatoes on a paleo diet, click here.

I hope you’re ready for some seriously delicious crispy potato latkes that will wow everyone who takes a bite!  Get ready for people to fight over them – this is an inevitable part of making latkes.  Grab your potatoes, onions, and a big skillet – it’s time to go! 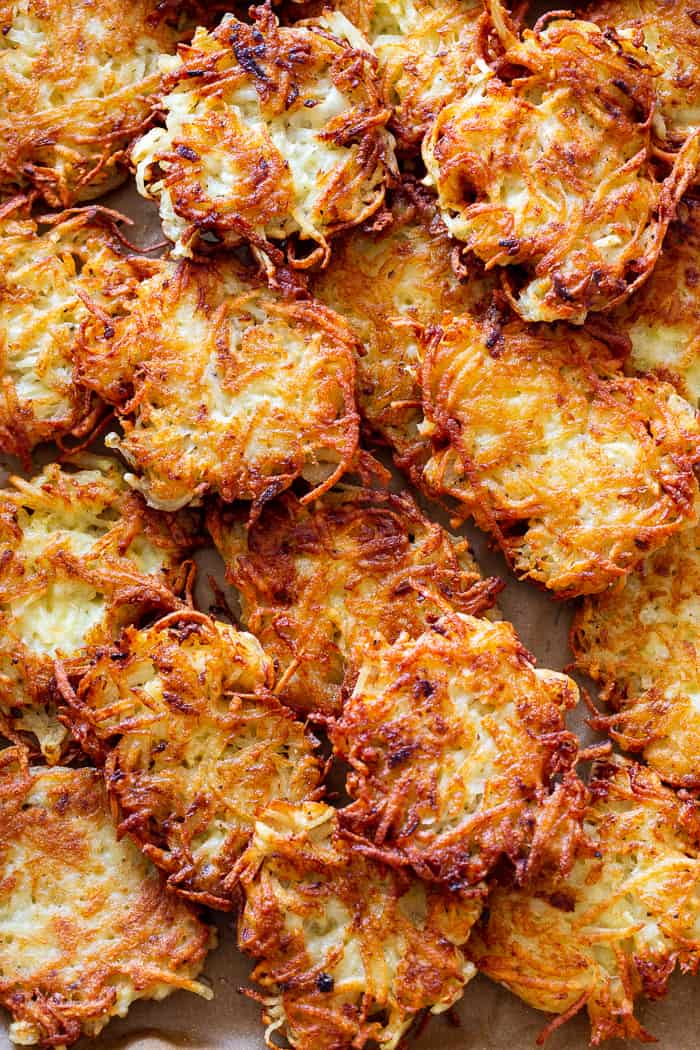 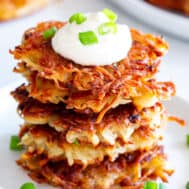 Print this Recipe
Did you make this recipe?
Leave a review
4.7 from 13 votes

Want More Whole30 Side Dish Recipes?  Try One of These!

Cauliflower Risotto with Bacon and Mushrooms