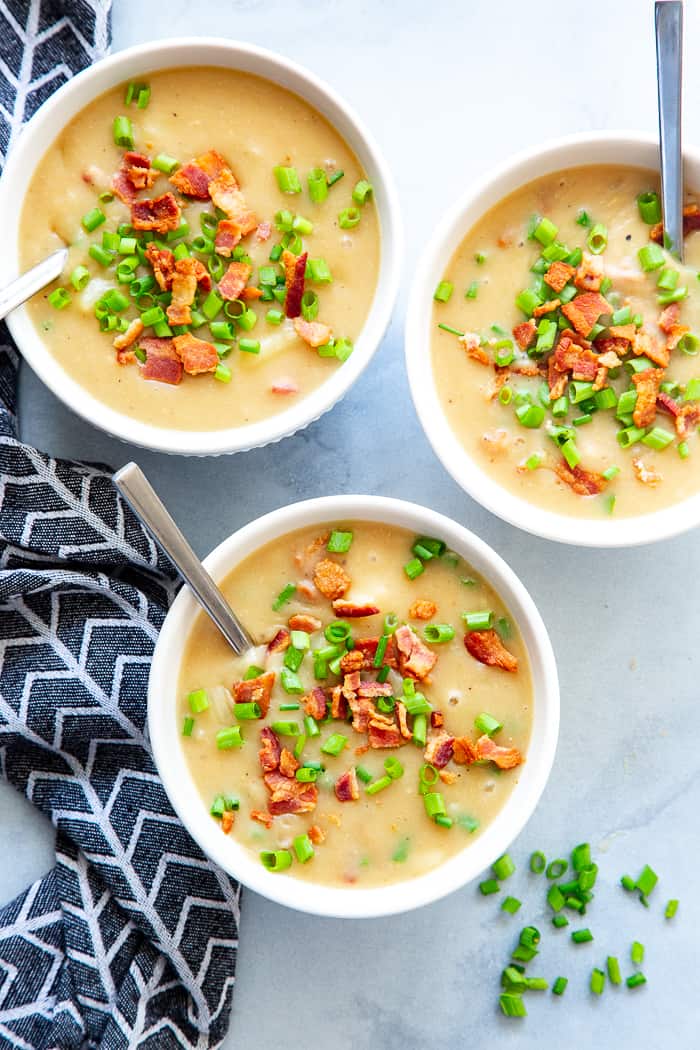 Is there anything cozier on a cold winter night than a creamy soup?  I’m calling it winter now, even though it’s still technically fall for a month or so.  We’ve had temperatures in the 20’s early in the morning – so winter it is!

Which for me means I need comfort food.  Okay, truth is is that I’m a comfort food kinda gal year round (ya think?) so let me specify that I need MORE winter comfort food right now.  Which means creamy soup all the way!

And this creamy potato soup with bacon?  It’s a dream come true.  Really.  You’ll do a double take (or double taste?) at the first bite – it’s delicious and just perfect!  And yes, it’s Whole30 and paleo friendly 🙂 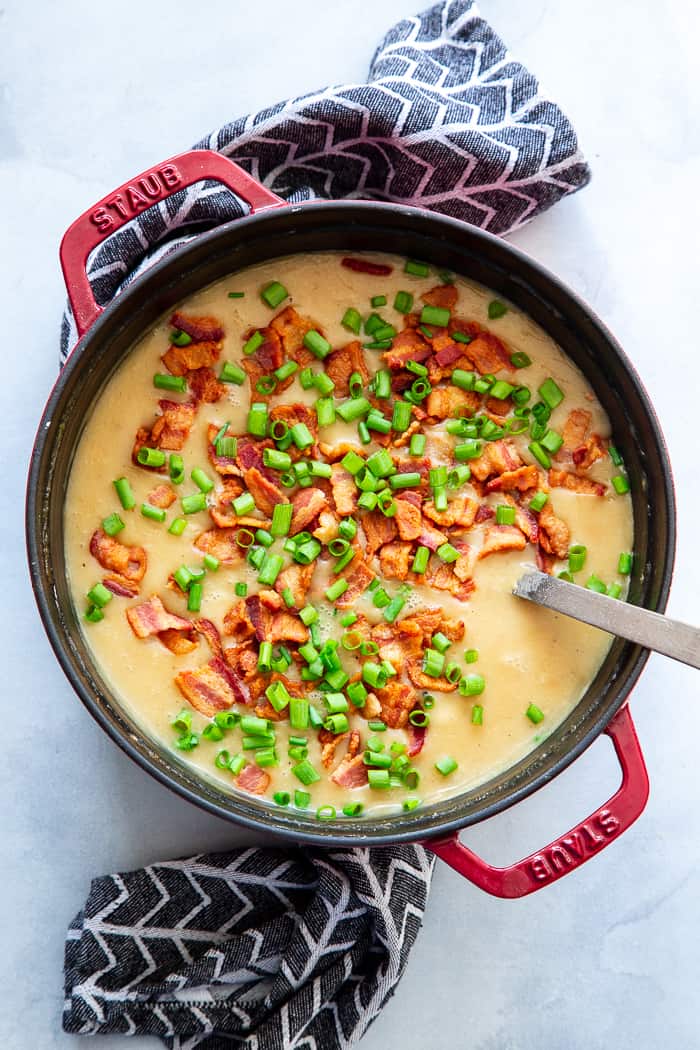 What You Need To Make Creamy Potato Soup with Bacon

You don’t need anything fancy for this potato bacon soup!  The ingredients are simple and delicious – here’s what you’ll need: 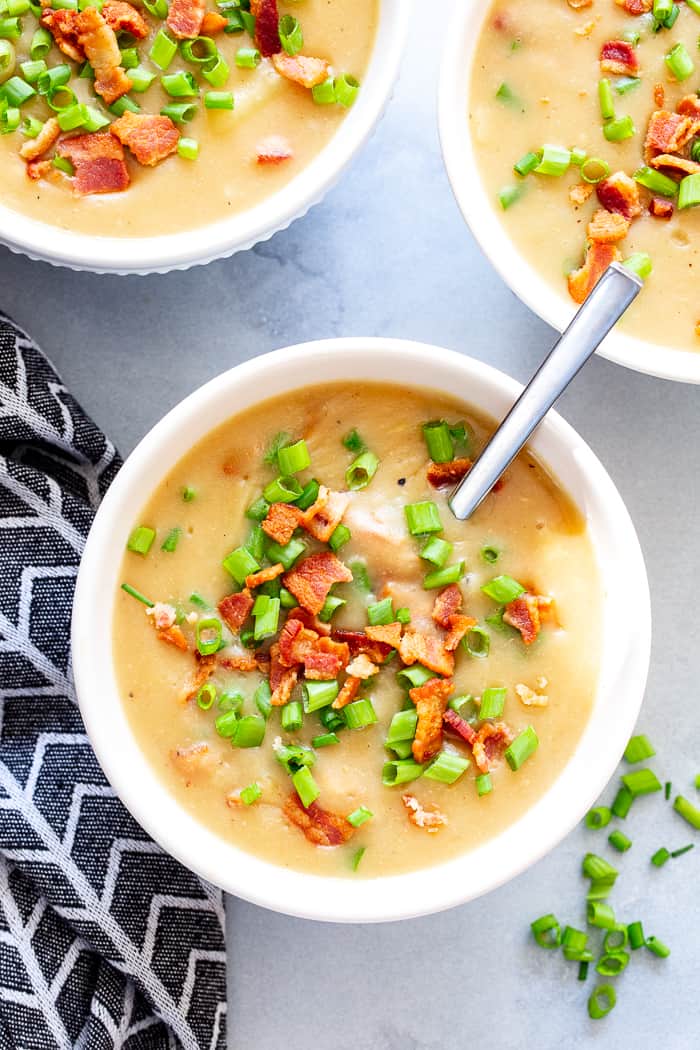 How to Make Creamy Potato Soup

It all starts with the bacon 🙂 After cooking your bacon until crisp in your stock pot, set it aside to drain and reserve 3 tablespoons of the fat.  Cook your onions in the bacon fat until soft, then add the garlic.  Your kitchen is smelling amazing already!

Next, toss in the peeled and cubed potatoes to coat.  I like to do this because it adds even more flavor to the potatoes!  Sprinkle the tapioca flour over the potatoes, and then add in the broth, coconut milk, salt, pepper, and nutritional yeast.

At this point, you’ll stir everything and bring it to a boil so the potatoes soften.  It takes about 10-12 minutes depending on the size of your potatoes.  You’re looking for them to be fork-tender.

Add the blended half of the soup back to the pot, add 3/4 of the bacon back and let it simmer a few minutes.  Then, season to preference with salt and pepper.   Make sure to serve with lots of sliced green onions and the rest of the bacon! 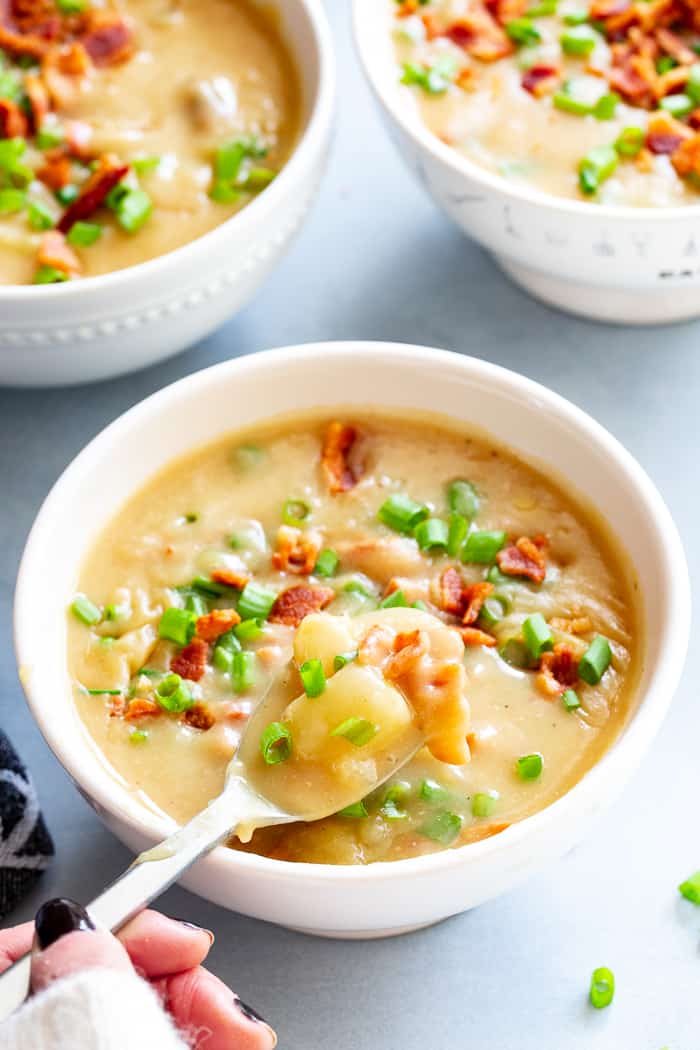 But – Are White Potatoes Paleo?

I get this question every time I post something involving white potatoes.  The answer depends on who you ask, but for the most part (at this point in time), most will say that white potatoes can absolutely fit into a paleo diet!

White potatoes were added into the Whole30 program several years back (as long as we’re not talking restaurant fries!).  And yes, they are high in carbs, but the Paleo diet isn’t about limiting carbs – it’s about eating real food.

That said, not every “real food” is for everyone of course – so it’s best for you to decide what works for you and what doesn’t.  Labels aren’t as important as nourishing your body based on what makes it healthier!  And that will be different for each person.  For more info on the white potatoes on a paleo diet, click here.

To sum up, many people who live grain free and paleo are totally fine with some white potatoes here and there.  I’m guessing if you’ve reached this point in the post, you may just be one of those people 🙂 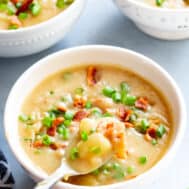 Print this Recipe
Did you make this recipe?
Leave a review
4.56 from 49 votes

Want More Whole30 Soup Recipes?  Try one of These!