It’s been one of those weeks.  I think you probably have them too from time to time.  Not a total disaster of a week, but rather the kind that you’re about three steps behind at all times, and nothing is turning out right.

The kind where I’m not even sure I have enough thoughts to cover an entire Thinking Out Loud post.   When am I ever short on thoughts?   Certainly not when I’m supposed to be sleeping (another issue entirely) but since I’m also short on memory, a lot if getting lost lately.

Too bad I can’t purchase more bandwidth/disc space/memory for my brain. Imagine that?  Will we be able to do that one day?  Do I sound like a complete lunatic right now?  You know it – that’s what Thursday’s ’round here are all about.  I guess I do have a few things to say.  I’ll start with the beginning.

Thursdays are For Thinking Out Loud (AKA Blog Therapy)

Monday was totally fine until I updated a plugin.  For you bloggers reading, it was W3 Total Cache and after updating it, there was some conflict with the files, and, BOOM!  White screen.  Fatal error.  Site offline { you get the picture.}   It happened about 45 minutes before I had to pick the kids up at school and do the after school activity routine.

After nearly passing out cold (no joke) I hopped on live chat with my host and within 30 minutes the site was back up, but the plugin was still a problem and I received an error message when doing anything on my dashboard.  It wasn’t resolved until 9:30 pm and my whole day was thrown off.  Ugh.

I celebrated at 9:30 pm by staying up until midnight getting some online-retail-therapy at Lululemon.  Which somehow turned out to be more enjoyable in theory than practice.   Although it’s  probable that Donald Trump’s voice in the background ruined it for me.   Of all the things I’d guess Donald Trump could ruin.  Lululemon.

Two failed recipes and a failed slow-cook dinner is all I have to show for Tuesday.  You would never guess these pumpkin pecan bars were a fail… 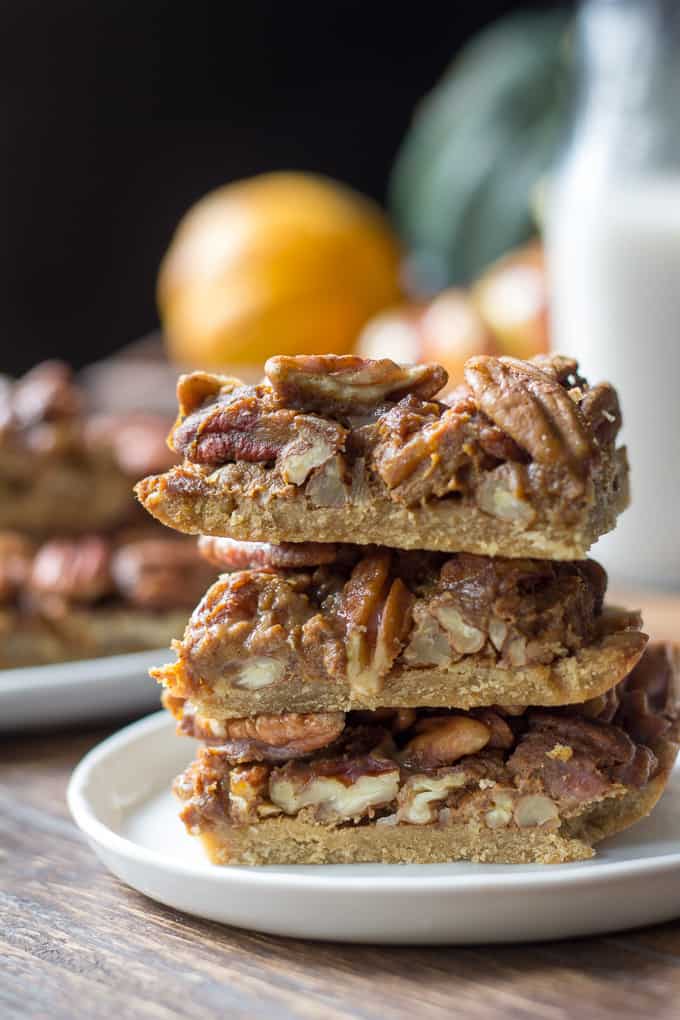 …but they were.  Both layers.  I wanted to make them happen so badly, but, it was just a no-go.  Diana liked them well enough though and she and Adam will happily eat them for breakfast until they’re gone.

Fail #2 was chocolate.  I think I need to have a new rule where I limit the number of things I try to cook in one day – it usually only gets worse, not better!  I saved the chocolate by turning it into freezer fudge with raisins in it, so not a total loss.

Let’s not even discuss the slow cook dinner.  I panicked when I realized I needed to make dinner before picking the kids up, (we wouldn’t be home until 7) and literally threw random things in the slow cooker hoping for the best.  It was edible, but barely.

I celebrated this day by staying up until midnight drinking cinnamon vanilla tea and staring at my computer, forgetting approximately once per minute why I was staring at it in the first place.

I told myself I wouldn’t try to redo the pecan bars, but, I lied to myself.  Wednesday consisted of baking,  no-baking, and fighting terribly changeable weather/light to try to get decent photos. 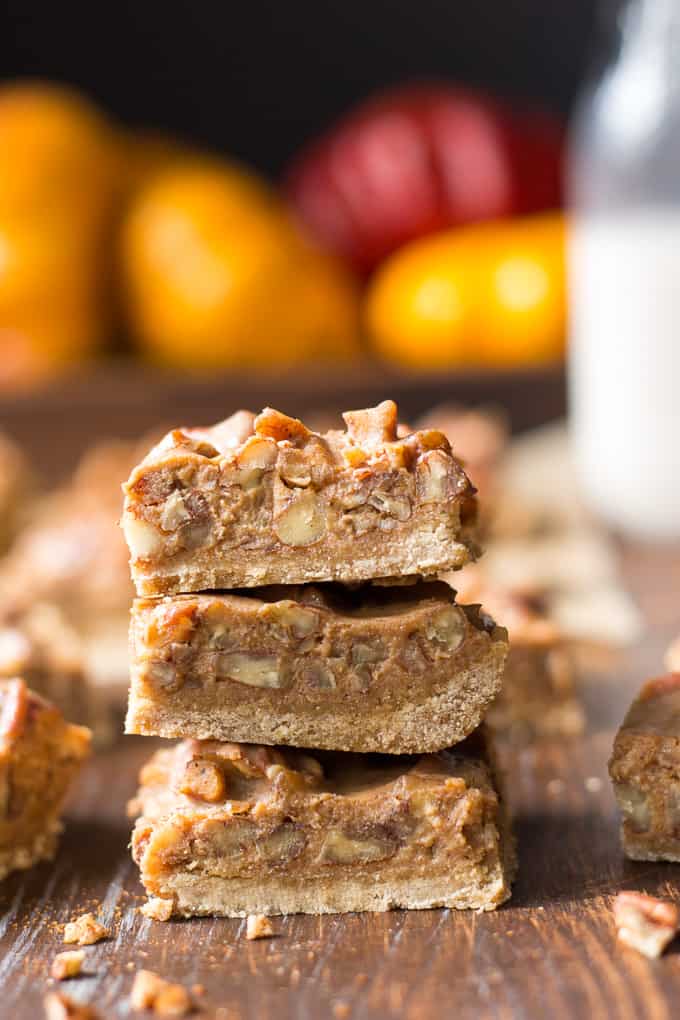 They are no-bake and the vote was that they’re better than the first version, phew!  Pumpkin Caramel Pecan Fudge Bars?  Will definitely have to work on that title.

At least dinner was a win – I made my very old school crispy chicken nuggets  and was pleasantly surprised that they remained tasty even hours after cooking – score 1 point for discovering a new make-ahead dinner for us.

Speaking of make-ahead dinners, I made super yummy, VERY easy bacon wrapped chicken thighs that I can’t wait to share. 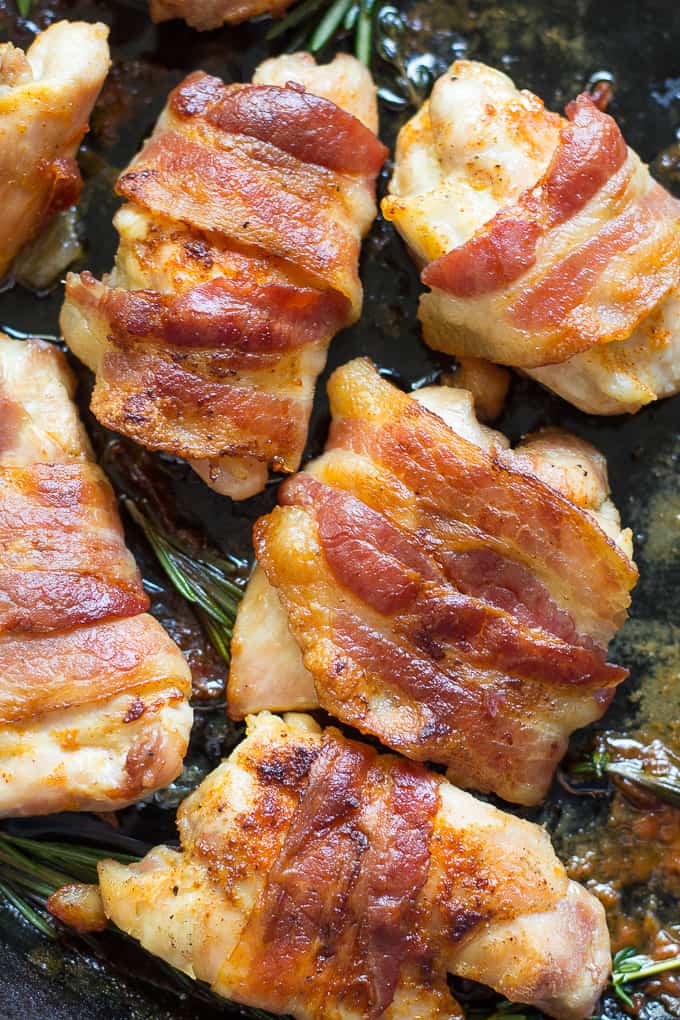 Bacon makes everything better.  Or is it butter?  Both?  Can coconut oil join?  I’m obsessed with coconut oil so it’s definitely joining my own personal “makes it better” list 🙂

I celebrated my dinner success after the kids went to bed by drinking more cinnamon vanilla tea and writing this post – BAM.

All worth it, right?  Hmm, not sure about that one – I haven’t proofread it, and haven’t yet decided if I will.  Ebay is calling!  Plus the 3 desserts in my refrigerator are vying for my attention.   I’m all about the #bloggerproblems tonight, I guess.

What’s on your mind this week?  Are you on or off your game?

What’s one of your favorite make-ahead or slow cook dinners?

What do you do to “celebrate” at the end of the day?