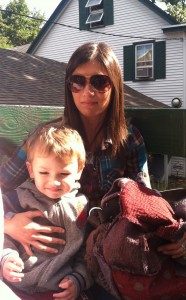 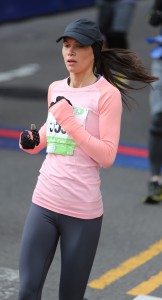 There’s me, on the left, alongside my RAE (Running Alter Ego).  When I first started running eight years ago, I noticed right off that bat that I seemed to have this RAE and that she was nearly everything I wasn’t at that point in my life.  I was going through a time of really tough, life-altering decisions and I was feeling scared, guilty, and doubtful of my choices, three things that were too familiar to me through most of my young years.   But, when I started running, the person who’s feet hit the pavement basically said to hell with all that other bullsh*t.  She didn’t feel emotional pain at all and she laughed off physical pain.  In fact, she laughed at pretty much everything, including me.  She told me to follow the feeling in my gut, to stop wasting time telling myself I sucked, and she taught me the power of positive thinking.  She never thought, “what if I’m not fast enough” or “I’m scared of looking like an idiot” or “I’m screwing up my life and I’ll never pull it together”.  Never.  Instead, she didn’t consider the possibility that she was anything less than awesome, smart, funny, fun, strong, fast, and powerful.  DID NOT CONSIDER.  Not only was she unafraid of life but she LOVED life and was excited about the future.  But, the sad thing is that, for years, I said goodbye and put her in the closet along with my running shoes each day.  And, although I knew that she was still there somewhere, I flat out ignored her when I wasn’t running.

Fast forward to 2012, the year I started racing.  After living and running through the challenges of having 3 kids, my RAE slowly started popping up “in real life” and I decided to bring her out of the dark at a 5k race.  I wasn’t sure how it would play out.  Well it turned out not quite like the Superman/Clark phenomenon where I put the clothes on and made the switch, I realized I actually had to BE RUNNING before she appeared.  I was so nervous and self-doubting before this ridiculous little 5k, (even though I was running consistently 6-8 miles at the time), that I nearly psyched myself out before the darn thing even started.  I was somehow certain that I was not cut out for “racing”.  After repeating to myself “this is what you do, this is what your body does” over and over during the first 1/4 mile or so, she did finally show up.

Over the course of the next several months I entered lots of 5 and 10k’s and my RAE began to develop a larger presence in my life.  There were now other people who witnessed her existence (I was always a solo early am runner) and I wasn’t sure how I felt about that.  I realized that for all those years the reason I put her in the closet was that I FEARED HER CONFIDENCE.  She was not a “good girl”, she spoke her mind, was honest, proud, did not give a sh*t if she put makeup on that morning and certainly did not care what anyone thought of her.  She had fun and was funny.  She passed people when they were struggling that last mile and didn’t look back.  I had a hard time accepting that SHE WAS AND IS ME.

I still, while driving along a road that I ran 10 miles on that very morning, can’t always believe I am that girl.  But while I kept my RAE hidden away, over time I realize that running really was beginning to shape me as a person, and teach me about life through its inherent metaphore.  The creation of this blog has been a huge leap for me in “coming out of the closet” as a runner.  Never before did I give myself the opportunity to share my RAE with people and just let go and admit that this is a lot of who I’ve always been.

You pretty much never need to look further than the Wizard Of Oz for all the really important life lessons.  It’s obviously no coincidence that what each character was searching for the whole time was not only with them all along, but it was arguably each of their primary strengths and they were the last to figure it out.  I am not saying I am some kind of amazing runner or anything, but rather that running has helped me to cut through the negative, limiting nonsense that tends to creep into my head and use the voice of my RAE in everyday life, because let’s face it – life is too short and precious to keep that beeyoch in the closet all day!

What do you guys think about a RAE – do you feel like you have one?  How has running helped you approach your non-running life differently?  Do you ever discover parts of yourself that you might not if you didn’t run?  How would you describe yourself as a runner?  As a person?