One day soon, I’ll get around to doing a “day in the life” for WIAW, as I originally had wanted to do for this week, but, the life part of “day in the life” got in the way and I failed to take pictures of anything besides my food.  Have no fear, you’ll still get to see everything I ate last Thursday.

But, since there’s usually a story (boring as hell, yet still a story) behind every plate of food, I’ll try to fill in some of the blanks, in case you happen to be wondering what’s going on behind the scenes over here in my world.  This is just me guessing though, so I take no responsibility for mixing up last Thursday with, say, today.  It all starts to blend, really, it does.

Everything I Ate Last Thursday {WIAW} 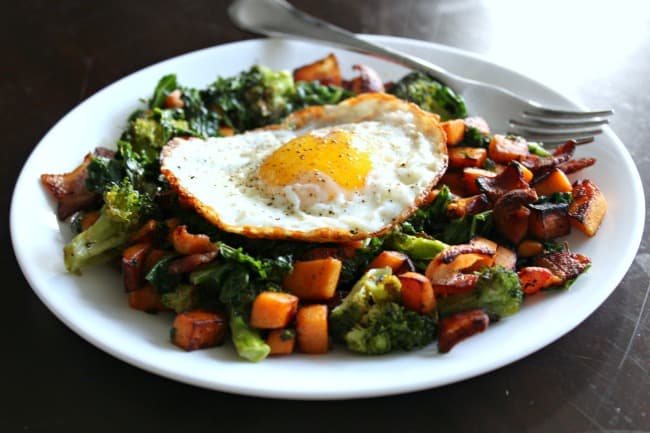 Breakfast – This was a no-run day for me, but that’s never stopped me from eating a good sized breakfast complete with a fancy little fried egg to top it off.  This was a sweet potato bacon hash with kale and broccoli.

Double greens are rare for me but I’m pretty sure it was because I was nearly out of kale and wanted something other than spinach.  This was not the last time I ate broccoli on Thursday, I guess it made a good impression on me.

Behind the scenes, I’m most likely whining about cooking 3 different meals for 3 different kids, attempting to read/comment on blogs, and burning something on the stove.  I’m just guessing, but that scene happens at least 4 out of 7 days per week.

After the kids went to school, I most likely drank coffee, but, did not take a picture.  Coffee making is usually rushed, then I drink it in spurts, and sometimes don’t completely finish it until after lunch. 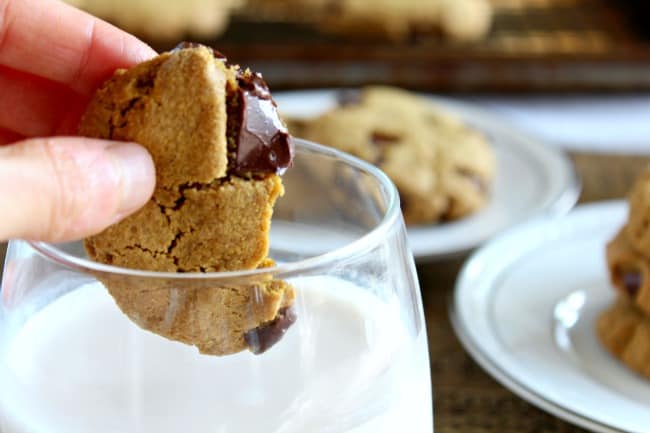 Snack – This was the day I baked (for the first time) a new recipe for big soft chocolate chunk cookies.  These were first made with sunflower butter, but I’ve since tested the recipe with almond butter and cashew butter, for the sake of accurate representation, and also because they turned out really flipping good.

During the photoshoot, I ate one cookie plus some batter, plus maybe a spoonful of sunflower butter.  The spoon has to get clean somehow, right?  And I hate seeing delicious creamy sunflower butter go down the drain. 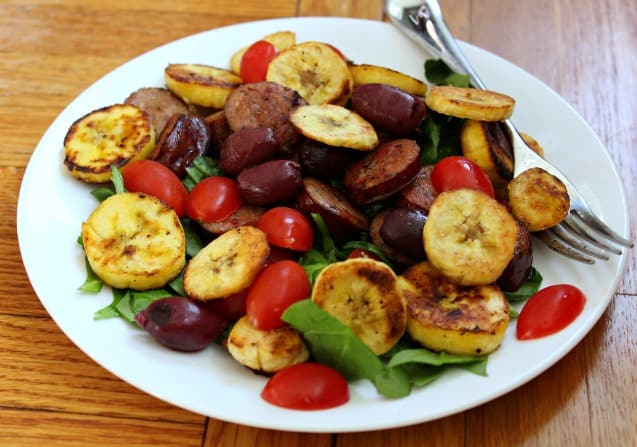 Lunch –  Lunch was late today since I was full from my snack, so I ate this around 1:45pm I think, before picking Drew up from school.  It’s spinach, tomatoes, andouille sausage, olives, and fried plantains.  Super quick to throw together and very tasty and filling.  Between snack #1 and lunch, I worked on my blog post for Friday, which was my recipe for a delicious savory Butternut Sausage Bake with Kale.  Definitely check that one out if you haven’t already! 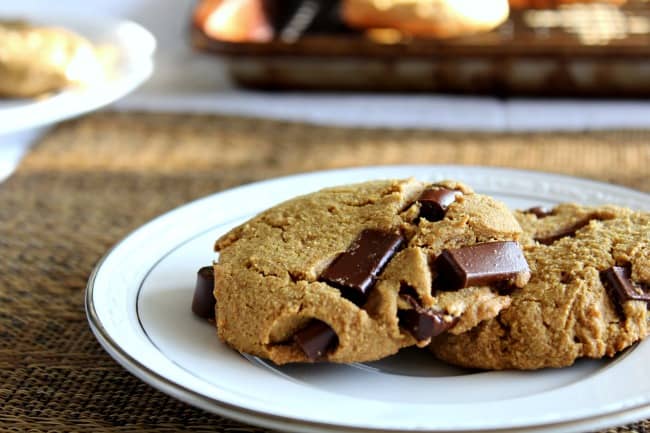 Snack #2 – This is probably not the actual cookie I ate for snack #2, but then again, it might be.  When my kids got home from school they were super excited to sample the new cookies I baked, so before heading off to after school activities we each ate a cookie.  They ate some fruit too, but this is my WIAW so not relevant.  It might be time for a kid WIAW soon! 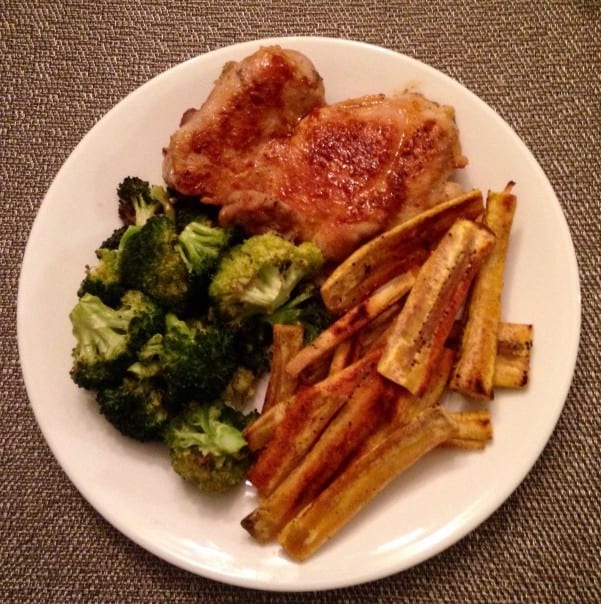 Dinner – We get home on the later side on Thursdays, so I do my best to make as much of our dinner ahead of time so we don’t have to wait until 7pm to eat.  We ate right around 6:30 on Thursday.

This was a boneless chicken thigh seasoned with sea salt, onion powder and smoked paprika, cooked in Kerrygold butter.  I love cooking chicken thighs in butter lately! Actually the plantain fries are also cooked in butter – I’ve been cooking with butter whenever it’s not bacon fat.  The broccoli I believe was roasted in olive oil with sea salt.  Did I relax with this dinner?  No, not at all.  Dinner is the least relaxing meal of my day and generally the hours from 4-8pm are the most stressful. 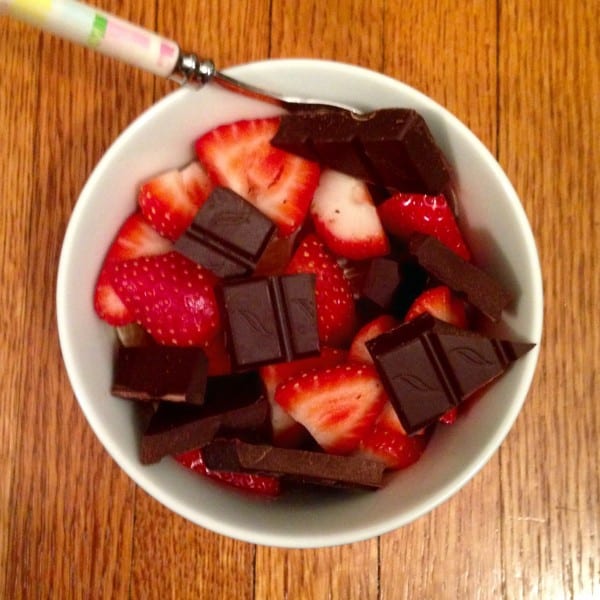 Snack #3 – After dinner I drank tea, although no picture once again.  I seem to have a problem remembering to take drink pictures lately, probably because it feels like more effort to make them look nice.  I also got the kids bathed and then made them snacks – they each had one more cookie and then fruit.  I’m not the only one of us to digs the chocolate and fruit combo 🙂

I usually make myself my own bedtime snack at the same time I make my kids’, but then don’t eat it until after they’re in bed, preferably asleep!  Honestly, I’m much happier eating in general when I know I won’t be bothered.  Especially when I’m eating chocolate.  Chocolate is so much better uninterrupted, right?

Everything I Ate Last Thursday for #WIAW #paleo #fitfluential #chocolate

What time of day do you have coffee?

If you have kids, do you eat with them or eat later on?

What’s typically the most relaxing meal for you?  For me, lunch!